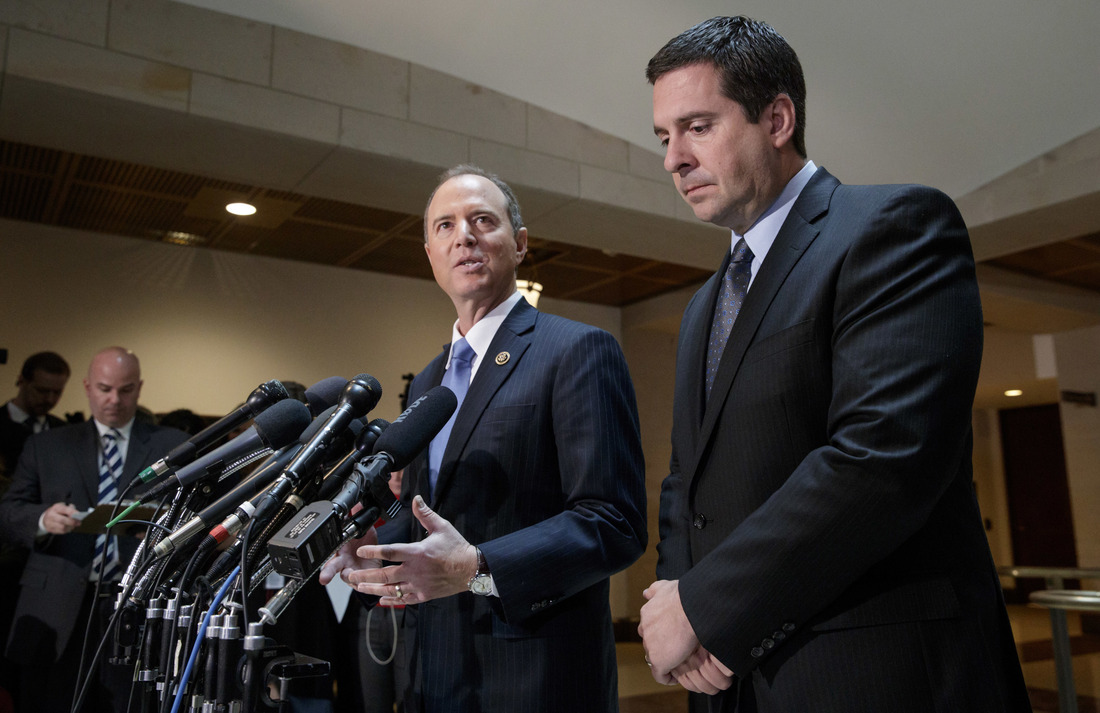 House Intelligence Committee Chairman Devin Nunes says he doesn't believe "there was an actual tap of Trump Tower," contrary to claims made by President Trump.

And the top Democrat on the House committee, Adam Schiff, told NPR's All Things Considered "there's no evidence" to support Trump's claim.

Trump alleged that his predecessor, President Barack Obama, tapped his phone at Trump Tower in a pair of tweets earlier this month.

Trump has not produced any evidence to back his assertion.

Terrible! Just found out that Obama had my "wires tapped" in Trump Tower just before the victory. Nothing found. This is McCarthyism!

How low has President Obama gone to tapp my phones during the very sacred election process. This is Nixon/Watergate. Bad (or sick) guy!

In a Fox News interview to air Wednesday night, Trump seemed to equivocate somewhat, saying "wiretap covers a lot of different things." Trump also says in the interview that he expects "some very interesting items coming to the forefront over the next two weeks."

Speaking at a Capitol Hill news conference, Nunes, a Republican from California, said:

"President Obama wouldn't physically go over and wiretap Trump Tower. So now you have to decide, as I mentioned to [the press] last week, are you going to take the tweets literally? And if you are then clearly the president was wrong. But if you're not going to take the tweets literally and there is a concern that the president has about other people, other surveillance activities looking at him and his associates — either appropriately or inappropriately — we want to find that out."

FBI Director James Comey is likely to face questions about whether the agency obtained a warrant to wiretap Trump Tower at a House committee hearing on March 20. Nunes and Schiff confirmed NSA Director Mike Rogers will appear along with Comey at the hearing.

Sen. Lindsey Graham of South Carolina, chairman of a Senate judiciary subcommittee investigating Russia, is also expecting some answers. In an interview on NBC's Today show, Graham threatened to subpoena the Department of Justice to force officials to reveal whether they have been investigating the Trump campaign.

Graham said the Senate will also hold up the nomination of Rod Rosenstein, Trump's pick for deputy attorney general, until Congress is provided with information "to finally clear the air as to whether there was ever a warrant issued against the Trump campaign."

Graham and Sen. Sheldon Whitehouse, the subcommittee's ranking Democrat, sent a letter to Comey two weeks ago asking him to provide the information by Wednesday.

The former president's office has denied the charge. Former Director of National Intelligence James Clapper has said he knew of no warrant to wiretap Trump.

Graham says he knows of no evidence of such a warrant but added that he is now "getting concerned, because it's taking so long to answer my letter." The House Intelligence Committee had asked the Department of Justice to provide evidence backing up the president's claim by March 13. Nunes and Schiff now say they expect an answer by March 20.

Intelligence officials have concluded that Russia employed cyberattacks during the presidential campaign intended to hurt Hillary Clinton and aid Trump.

Nunes said it is possible that conversations Trump campaign officials had with Russia were captured in surveillance of Russian officials, such as contact between former national security adviser Michael Flynn and Russia's ambassador to the U.S. Nunes expressed concern that such surveillance was leaked for political motivation and is asking for more information on such surveillance from the intelligence community.