A year ago, @thebradfordfile didn't exist. Today, it's one of the most seemingly influential anonymous profiles on conservative Twitter: it's been retweeted by Donald Trump himself, cited by outlets including the Washington Post, Quartz, and Salon as an exemplary measure of conversational health for the right; and has produced viral tweet after viral tweet. But @thebradfordfile isn't a bot, a Kremlin agent, or some other typical misinformation monger. With more than 100,000 followers, a penchant for spreading far-right propaganda, and a curious network of seemingly-automated accounts regularly amplifying the reach of its tweets, @thebradfordfile is something much more insidious than any of the (now infamous) agitprop-spreading accounts to come before. It's a product of the virality-obsessed, soundbite-powered social media landscape we've all begrudgingly succumbed to, but also of the media, which loves to work itself into a panic over the success of the alt-right, therein bolstering and legitimizing it when the basis for doing so is nothing but a smokescreen of faked traffic it is unequipped to comprehend.

Mainstream reporting on social media has a tendency to mysticize the activities of the alt-right adjacent, especially online, lending the subject so much credence they transform from a mere person posting things on the internet into some shady, sinister mastermind. Every bad actor is presented as a "troll" or "bot" (probably foreign, or worst of all, Russian), with untold influence and power falsely obtained through their masterful use of Very Bad Tech and a whole lot of scheming. The key players are usually callous techy middlemen or obnoxious ultra-conservative bros. Though these archetypes have their uses, they serve mostly to get clicks. Reality is rarely as sexy as hyperbole. 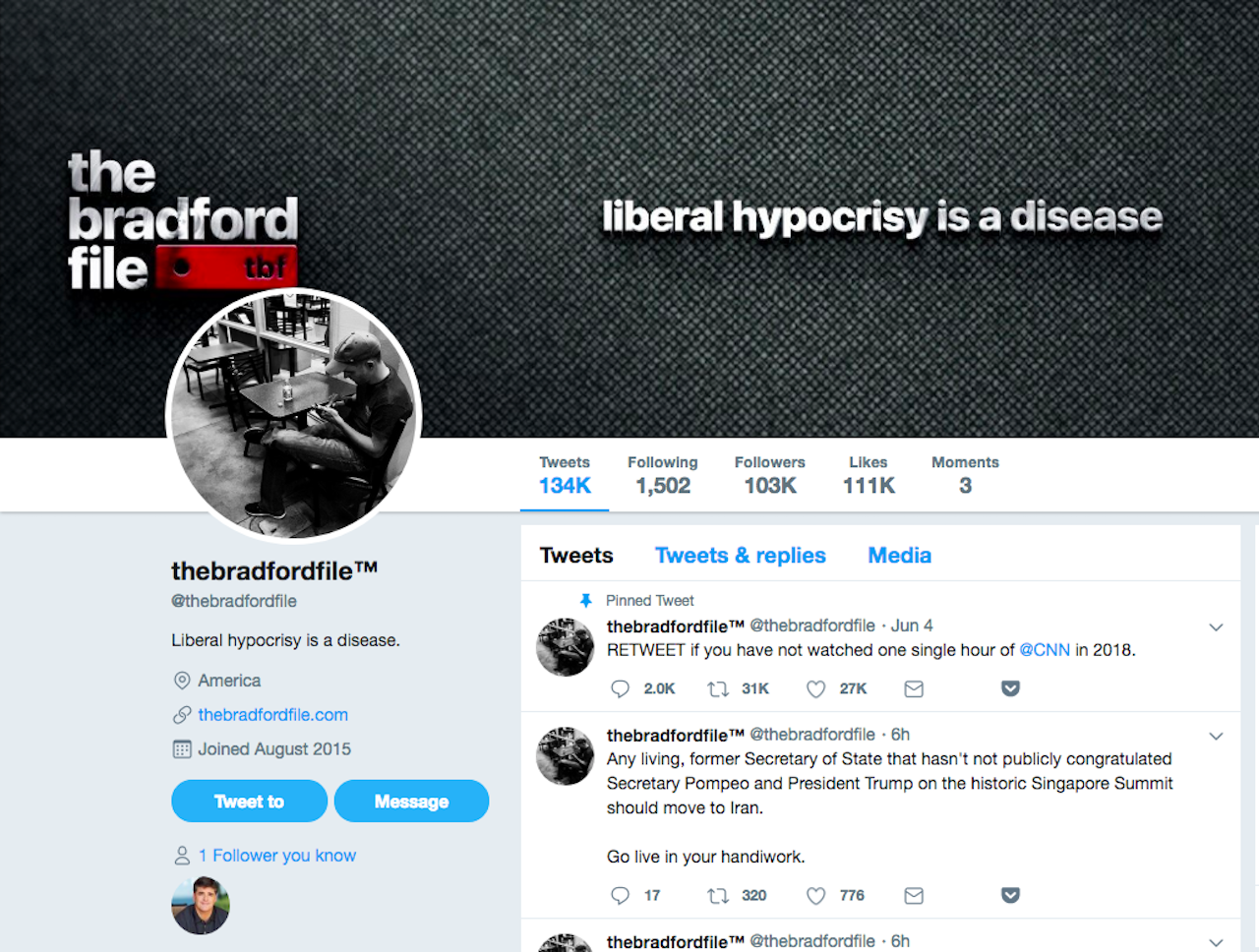 To see how popular an account like @thebradfordfile is and then lose your head about how the world is going to shit is to misunderstand how it all really works. Social media is built upon this flawed assumption of goodwill and veracity: say, a post with 25,000 likes has 25,000 likes because 25,000 people actually liked it. If an account has 100,000 seemingly active, engaged followers, then there are 100,000 actual humans out there listening to them. We ascribe real-world meaning and importance to digital metrics regardless of the fact that they're so easily manipulatable they are practically meaningless. Likes, eyeballs, retweets, you name it — it can all be bought. Yet we blindly insist on their worth as a genuine form of social currency anyway, inflation be damned.

The same goes for @thebradfordfile. While the account may appear to have a verifiable army of genuine fans, interaction data obtained by The Outline indicates a distinctive pattern of Twitter amplification and engagement boosting, with @thebradfordfile as the primary beneficiary. Anywhere from 150 to 600 times a day, the account fires off a tweet to its legion of followers and is quickly retweeted by a core group of startlingly similar accounts, all of which curiously seem to exist solely to amplify ultra-conservative content hundreds of times each day. Common topics include: conspiracy theories about the Mueller investigation, the nonsensical strawman known as "Spygate," Hillary Clinton, patriotic calls to MAGA, the evils of immigration, and just how much Trump is winning. (Oh, and a bunch of memes, of course.) The Outline partnered with Mentionmapp Analytics — a Canadian analytics organization which specializes in network visualization and identifying covert amplification efforts on Twitter — in order to obtain a more concrete understanding the web of suspicious accounts circling @thebradfordfile. 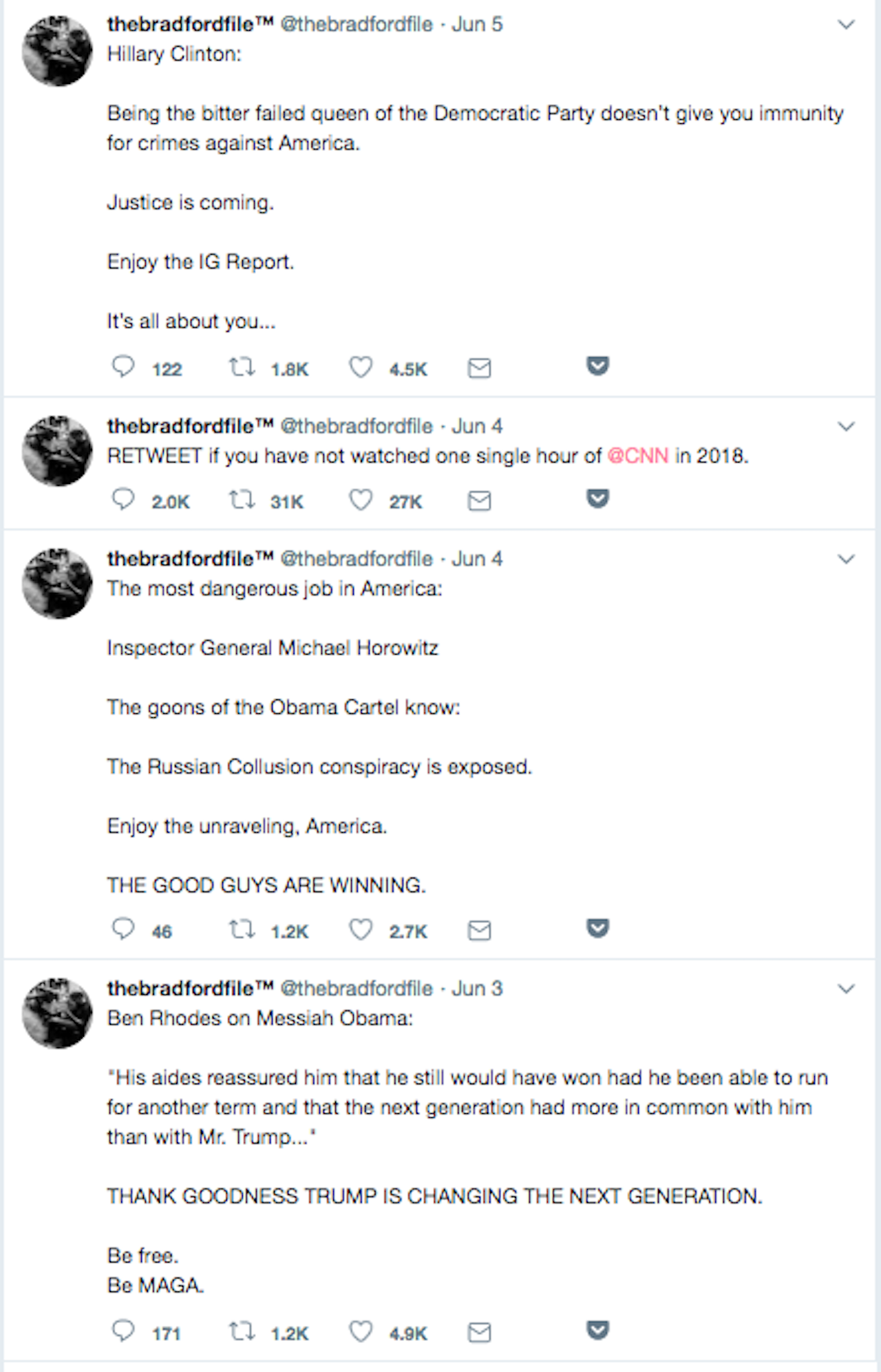 Mentionmapp first tracked and analyzed @thebradfordfile's activity over a three-day period in late March, extracting the profile data and Twitter history of every account that mentioned or retweeted the account. The results were telling: In 72 hours, over 200 accounts mentioned or retweeted @thebradfordfile multiple times. (Note: This figure is different than the number of accounts that merely mentioned or retweeted @thebradfordfile once during the test period in order to ensure that the dataset isn't corrupted by the activity of legitimate fans and/or followers.) Of those accounts flagged by Mentionmapp as frequent content recirclers, approximately one third displayed hallmark signs of automated activity, with 69 profiles tweeting 100 or more times a day, and 21 profiles tweeting from 300 to 500 times a day. (It's also worth noting that while the dataset used to initially inform this analysis may be relatively small, The Outline has been able to verify that the results of the study align with the following two months of real-world activity. )

These are the profiles that are pushing @PrisonPlanet, @RealJamesWoods, @Cernovich — that whole ecosystem of the right — at volume. — John Gray, Mentionmapp co-founder

"Profiles that are tweeting in excess of 70 times a day present the potential to be what we might call cyborg-like, [or having] an element of human-meets-machine," explained Mentionmapp co-founder, John Gray. "So I would definitely consider any profile that is tweeting more than 300 times a day programmatic — the Oxford Internet Institute use[s] the phraseology 'computational propaganda.'"

That's not to say that they're bots, though. Not in the traditional, 100-percent-machine, wholly anonymous, copying-and-pasting-poorly-spelled-messages sense of the word, anyway. Instead, they're human sockpuppets amplifying @thebradfordfile's particular brand of divisive political messaging. (BuzzFeed News reported on an account that worked to trend certain topics or names in 2017.) Amplification at this scale can have profound effects on the experience of real people trying to get an idea of what's actually happening online — what views are acceptable and what aren't. These sorts of practices serve to normalize hate speech and dull the impact of divisive rhetoric by repeated exposure. They leave users with a warped understanding of what the general consensus on a particular topic actually is, which can quickly lead to radicalization.

These sorts of practices serve to normalize hate speech and dull the impact of divisive rhetoric by repeated exposure.

"One of the key things we see with these profiles [is that they] are hyper partisan," said Gray. "This is not just tweeting 300+ times a day. This is tweeting essentially the same content. This is the same pool, the same theme. These are the profiles that are pushing @PrisonPlanet, @RealJamesWoods, @Cernovich — that whole ecosystem of the right — at volume. We're seeing this audience that [is] obviously using automated tools to amplify content. And, of course, these people aren't just tweeting 'Oh, this is @thebradfordfile!' He's just part of the ecosystem and these are profiles that are obviously helping amplify him, but they're also amplifying all of the other key players in the right's ecosystem."

A number of these profiles are anonymous too, with little indicator of a genuine human person pulling the strings. In some cases, you have the classics — a grey egg avatar with a blue banner — so the only remaining identifying information is the date they joined. "You'll see profiles that use an animal avatar too," said Gray, "or they've got their banner as a [generic] shot of Donald Trump, [but] there is no indicator whatsoever of a name of a real person or a link to any other social profiles. And so what we now have is a high volume, hyper-partisan anonymous profiles."

The man behind @thebradfordfile, of course, denies the existence of all of this and refutes any and all claims of conscious amplification or general malfeasance. "If I knew how to just get 10000 retweets on everything, that's all I would do," John Bradford Williams, who runs the account, told The Outline in a phone interview. "But that's not how it works."

Williams attributes his success not to the network of shady profiles regularly retweeting @thebradfordfile, but to his his focus on producing authentic content and his background in data analytics, which he believes allows him to understand social media on a deeper level. "It's obvious to anyone that has a large Twitter account that there's kind of pyramid, and as you get more influence you go up," Williams explained. "Well how do you get to that next rung? How do you get the people that are bigger influencers than you are to actually take notice? I spent a lot of time over the last year looking into those questions and doing the research myself and then making the decisions based on those answers. I can answer questions about someone's Twitter account by looking at their feed, looking at their likes, looking at their retweets, looking at the people they do retweet, looking at how they engage with their audience. There's different ways to do it. I know the most effective way to do it. And that's what I do."

However, Rob Colbert, who worked with Williams to produce visual and interactive content for @thebradfordfile, thinks differently. "He's a fraud," said Colbert in a private message. Colbert explained that Williams farms a significant portion of his engagement from direct-message based group chats on Twitter, which are informally known as "rooms." Rooms allow users to amplify their tweets in a pseudo-natural manner by pasting a link for the room members to retweet, like, or reply to. The Outline was able to confirm that @thebradfordfile has at least one personal room, called "Friends of Bradford," with enough members to guarantee medium engagement stats. 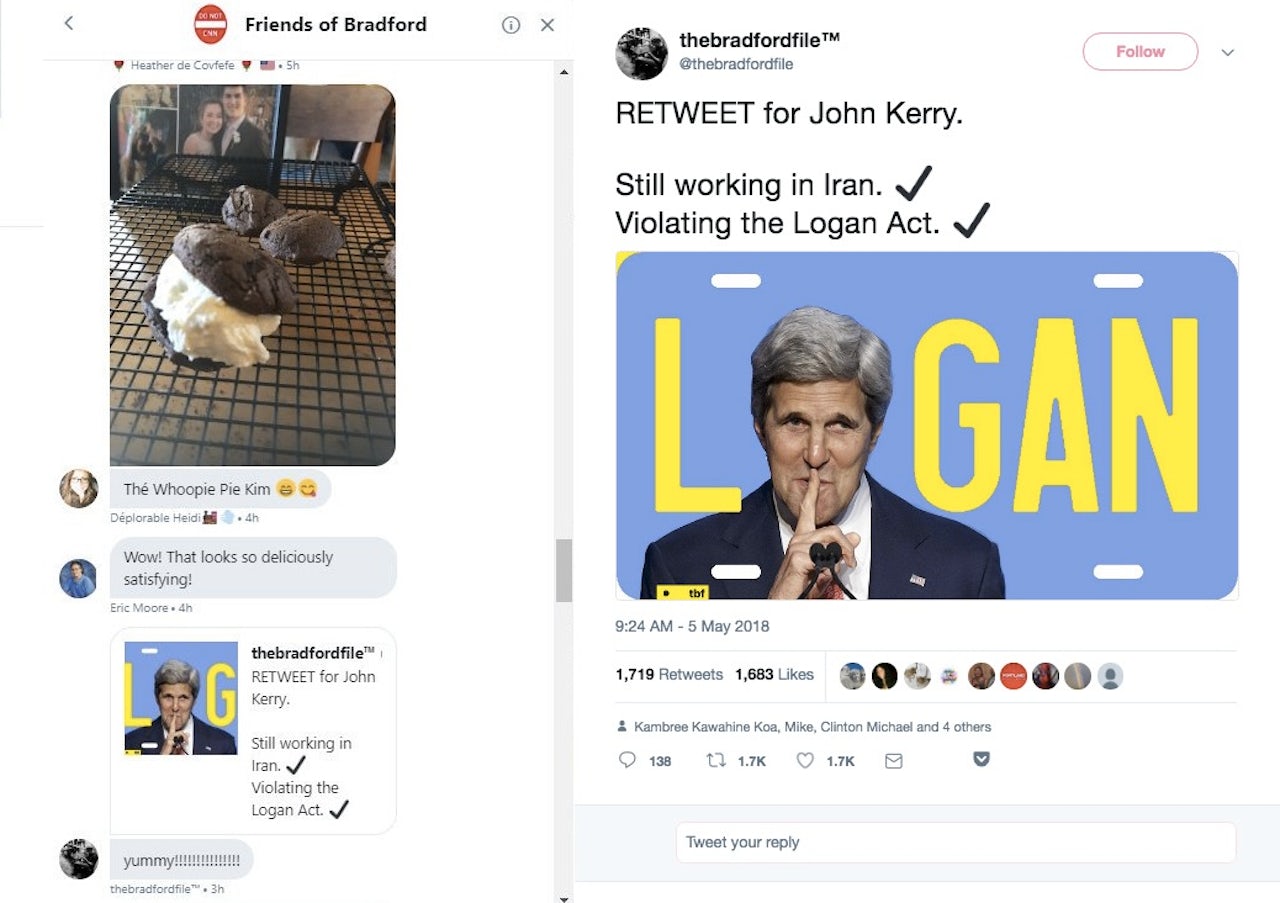 "But that room is particularly weak," said Colbert. "I've noticed when when he drops a tweet into that room he'll get maybe a triple digit number of likes and tweets. But he also has other rooms and I've never been shown those rooms. I don't know their names. He was always extremely secretive about all of that and I'm thinking any time he gets a tweet that has 'big engagement,' he's probably dropping it into these other rooms where he has said there are some pretty high profile people."

Though Colbert's comments directly contradict with statements made by Williams — who repeatedly told The Outline that he was the only person responsible for the account's content and that he in no way participated in rooms — The Outline was able to independently verify Colbert's association with @thebradfordfile. Colbert is also the co-owner of Pontemedium LLC (along with Williams), which operates @thebradfordfile's website.

It's difficult to imagine a reality where Twitter as a company would legitimately prioritize the promotion of quality over quantity, especially when the latter is infinitely more profitable.

Even if we accept what Williams said — that he isn't running any other accounts, that he only controls @thebradfordfile — we know for a fact that there's an army of cyborg-like profiles supporting him. Regardless of the identity of the instigator or their intentions, a network of accounts consistently and systematically amplify @thebradfordfile's content, which primarily serves to deepen the partisan divide both on and offline. Twitter doesn't seem to care, and why would they? Despite Jack Dorsey's occasional philosophical waxings, and the company's recent obsession with "conversational health," Twitter is, at its core, a business. Success is still defined by traffic and engagement, not only on and by Twitter itself but by outside observers of Twitter as well. This means accounts like these that will still do anything to get a retweet to appear to have outsized importance, regardless of the nature of their content or the legitimacy of their audience, and Twitter has little business incentive beyond the nebulous concept of "conversational health" to identify or put a stop to this activity. It's difficult to imagine a reality where Twitter as a company would legitimately prioritize the promotion of quality over quantity, especially when the latter is infinitely more profitable.

Over the last six months, Facebook has changed its algorithms to de-prioritize engagement bait and needlessly polarized content. Much to the surprise of basically every news publisher online, it appears to have worked. Inflammatory outlets who relied on gaming the system saw their numbers plunge, while the interaction rates for mainstream publishers remained unaffected. Twitter hasn't done the same. In May, the company announced a vague half-measure which aimed to "improve the health of the public conversation on Twitter" by hiding bad tweets under the "Show more replies" button. While the intentions were good, the real world impact appears to be marginal, especially when it comes to larger, more complex schemes like @thebradfordfile.