Ehrhart: I think he relished the competitive nature, not only of competing against other teams but competing in the New York market. If there's one thing about Donald, he is one hell of a competitor. He's been the same way for the thirty-two years I've known him. He's not going to back off any position. He's gonna go down the road he feels is the right thing to do. You can't go by and say, "Be nice now, Donald." He's just going to go full bore.

Lisa Edelstein (actress—House, M.D., Girlfriends' Guide to Divorce—and former Generals cheerleader, from The Huffington Post): I helped form a whole walkout because they were treating the cheerleaders like hookers. They were being asked to do these signings in their little uniforms in these sleazy bars all over the place, and they weren't protected and they were feeling really unsafe and uncared for and just sort of thrown into these environments. I was never asked to do it because I was too young. [But] when they started talking about it, we all got together and formed a walkout.

Trump dismissed the USFL's spring strategy right away, baiting the NFL with public talk of moving games to the fall. Canadian businessman John Bassett, beloved owner of the Tampa Bay Bandits and Trump's stoutest strategic rival, warned that such a move would trigger apocalypse. That kind of opposition only prompted Trump to proclaim: "If God wanted football in the spring, he wouldn't have created baseball."

Ehrhart: There's no question everybody appreciated him coming into the league at the time. They needed New York to succeed. Everybody really respected what he was doing in that second year of the league. What caused tension was he began pushing the tape, saying we needed to be playing in the fall, we have to go for it. Some of the other owners in different markets said we need to stay in the spring, that they had too many guns in the NFL. To some degree, both were right.

Steiner: He was the Pied Piper and these other desperate owners went along for the ride. It all happened in a flash. Then the USFL was dead and gone and he moved on to the next thing, which was Atlantic City. Which didn't work out too well, either.

Lapham: I know he had visions of a merger with the NFL. It was the only route he felt he had. NFL owners looked at him as a maverick.

Mike Tollin (former head of the USFL's highlight film show and director of ESPN's 2009 documentary Small Potatoes: Who Killed the USFL?): He was a bully. From the beginning I had enormous respect for [USFL commissioner Chet] Simmons and Bassett, and I saw him bullying them and using the USFL to get in the NFL through the back door. The NFL didn't want him. Bassett was dying [from brain cancer], and Trump derailed Simmons. He was good at finding and exploiting an opponent's weakness.

Brian Sipe (on ESPN Radio in Cleveland, October 2015): The man's about leverage, he's about promotion, and that's what our franchise was like back in the USFL. But we all got it. We understood it. It kind of made us the marquee team for the league.

The apocalypse arrived in the summer of 1986. Having already lost a collective $200 million, USFL owners, out-debated and out-maneuvered by Trump, voted 12-2 to move to a fall schedule. They also went ahead with a $1.7 billion anti-trust lawsuit against the NFL, who it claimed, among other things, had a chokehold on national TV rights. USFL owners hoped the suit would void the NFL's TV contracts, force a merger, or provide a game-changing payday. So instead of playing football in the spring of 1986, the USFL landed in U.S. District Court in Manhattan. (Bassett, one of the two votes against the fall move, died on the trial's first day). Ehrhart says Trump brought in lawyer Harvey Myerson—later jailed for a phony billing scheme—to lead the case. (Another of Trump's lawyer pals, Roy Cohn, the commie-baiting counsel for Senator Joseph McCarthy's hearings in the 1950s, served as only an infrequent consultant, says Ehrhart.) The NFL focused its defense on Trump. It portrayed him, Trump wrote in his 1987 bestseller The Art of the Deal, as a "vicious, greedy, Machiavellian billionaire, intent only on serving my selfish ends at everyone else's expense." To be fair, he's been called worse.

The 42-day trial ended with a jury ruling in favor of the USFL. But it also concluded that the league's dire straights were largely a result of its own doing, not the NFL's, and so awarded the USFL damages totaling...$1. Damages in anti-trust cases are tripled, so the award grew to...$3. The USFL appealed all the way to the Supreme Court, which four years later allowed the award to stand. Including interest, the NFL stroked a check to the USFL for $3.76. Ehrhart still keeps it, uncashed, inside a Memphis bank's safety deposit box. (Ehrhart also handled a $6 million check for the league's attorneys' fees and allows, "I did distribute that one.")

On Myerson's advice, the league scuttled its new fall season while waiting out the appeal, assured a huge payout was on the way.

The USFL never played another game.

Steiner: The founding fathers, such as they were, had a pretty good idea. And when you have a guy come in and right away say, "If God wanted football in the spring he wouldn't have created baseball." I'm like, "Why are you coming to this dance? Find another dance to crash." He crashed our party pretty hard. Fortunately, it was only football.

Ehrhart: There was plenty of back and forth. One group felt we should stay in the spring. When the final vote came, Donald was able to convince them. Donald had the absolute power to persuade. He had such an ability to counter any point anybody would bring up. If they'd say, "Let's stay in the spring," he'd say, "That really worked out good for you guys in L.A., didn't it?"

"Trump was a bully. He was good at finding and exploiting an opponent's weakness."

McVay: The bottom line: too many people were losing too much money.

Ehrhart: The Harvey Myerson thing, in retrospect, was a bad, bad deal. Donald said, "He's the greatest." That was one case where he was not the greatest.

Kelly: I'm still owed $250,000 from the Houston Gamblers. One owner told me when we merged that it was Trump's job to pay us back. We were told it was the Gamblers'. Nothing ever came of it. I wrote it off as a loss.

Steiner: There isn't a goddamn difference between Don King and Don Trump. One guy's hair goes north and south, the other's goes east and west. 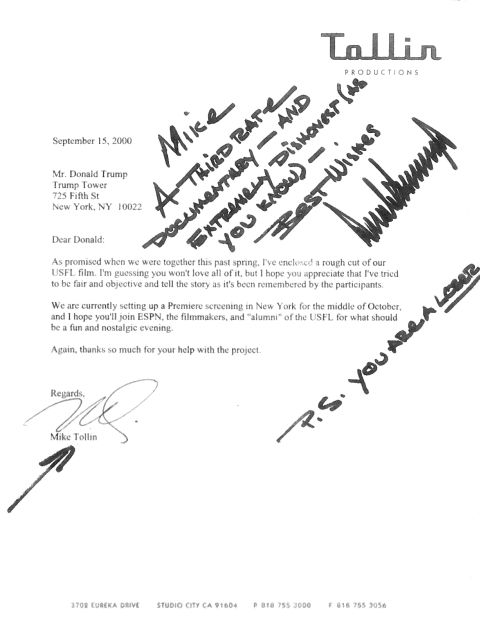 McVay: I think Trump kept the league together. I know that's not a popular belief, but I think he kept the league going a couple more years than it would have. I know it's popular to say Donald was the villain, that the poor players didn't get to pursue their dream. Hey, the league was outta money!

Donald Trump (in a message he wrote atop a letter Tollin sent to him with an advance copy of documentary on USFL's demise, and which Trump returned): P.S. You are a loser.