If you were to eat, say, another human being, how many calories would you be taking in? That's a valid question not only for health-conscious people, but for anthropologists, too. You see, our human ancestors were cannibals — but we don't really know why. Did they kill and eat each other like they would a mammoth or a wholly rhino — for the meat? Or were they practicing some sort of religious ritual?

To answer that question, James Cole, a senior lecturer in archaeology at the University of Brighton, looked into the nutritional value of a human being and then compared it to that of other animals our ancestors dined on. He found that eating a man provides fewer calories than gobbling down a mammoth, bison, or red deer. And that suggests that our ancestors ate each other not for nutrition but for some other purpose — maybe as a form of funerary or cultural ritual. The findings were published today in the journal Scientific Reports.

Was it some sort of religious ritual?

Today, cannibalism is a taboo (although it's still practiced by some remote tribes). But we have evidence that our prehistoric ancestors — including Neanderthals — dined on human flesh. All over Europe, bones of early humans, collectively called hominins, show butchering marks similar to those found on animal remains. Some hominin bones are clearly chewed, or broken to extract the marrow; sometimes the base of the skull is missing, meaning someone was trying to get to the brain. Researchers mostly believe that early humans were eating the dead because they provided easy access to tasty steaks, Cole says. But there are still questions about how often we practiced cannibalism — and why.

In modern humans, cannibalism happens for a variety of reasons: some people have resorted to eating human flesh after surviving plane crashes; in some cultures, the dead were eaten as part of ritualistic process; other times, dining on humans is a sign of sociopathic behavior (think Hannibal Lecter). So how do we know that cannibalism in early humans doesn't have some meaning other than pure nutrition? Cole wanted to know, and thought of answering the question by calculating the nutritional value of humans vs. animals.

"He's bringing a different perspective to the question," says Hélène Rougier, an associate professor of anthropology at California State University, Northridge, who did not work on the study. "It's an interesting approach."

To calculate the calories of a human being, Cole looked at several studies done in the 1940s and '50s that analyzed the protein and fat content of different parts of the human body. From that information, he could calculate how many calories you get from a one-pound heart (650), a four-pound liver (2,569), and three pounds of nerve tissue (2,001). After combining all organs together, you can basically slap a nutritional label on a human corpse that reads: 125,822 calories. At least, within the constraints of those 1940s and '50s studies. (They analyzed a total of four men, ranging from 35 to 60 years old, and weighing an average of 145 pounds, so Cole's caloric count only applies to male Homo sapiens with those parameters.)

Cole then wanted to compare our nutritional value to that of other animals known to be eaten by early humans. Again, he pulled from the published literature, and calculated how many calories you could get from the muscle mass of 20 ancient animals. (No information for internal organs exists, Cole says.) He found that the muscles of a mammoth would provide 3,600,000 calories, woolly rhinos 1,260,000 calories, and red deer 163,680 calories. In comparison, a man's muscles can get you only 32,376 calories. "We just aren't that nutritionally viable," Cole says.

So if eating a man isn't that nutritious, why in the world would our ancestors spend time and resources to hunt other hominins that are just as smart just to get dinner? Cannibalism must have had another purpose, Cole says, possibly one connected to warfare or religion. Other researchers think those are valid conclusions. "There can be a cultural explanation for all of these episodes of cannibalism," Rougier says. But that's not a completely new conclusion, she says. For years now, we've gotten more and more evidence that early humans like the Neanderthals were actually quite complex. So it's totally plausible that they ate human flesh for more than just gobbling down some juicy meat. 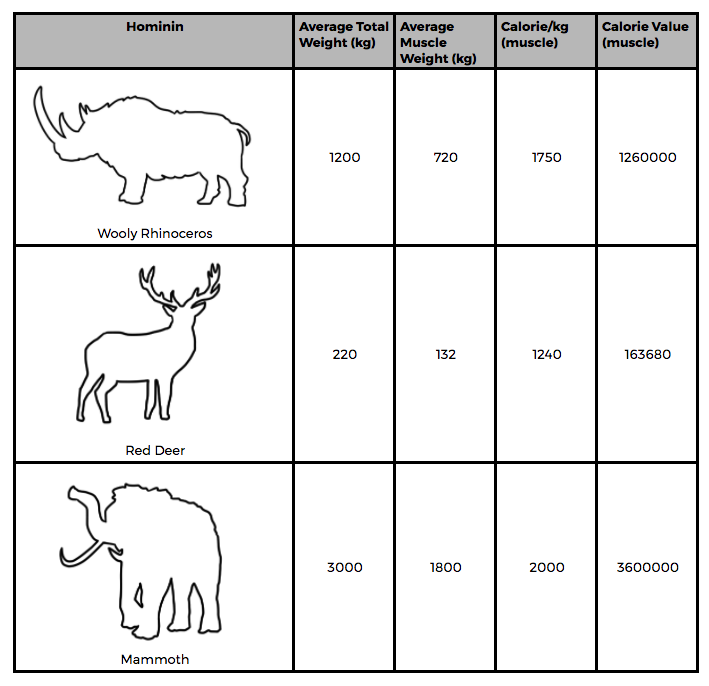 The problem, however, is that we might never know — and we certainly don't know now. "I'm not sure the evidence can really help to pick one or the other," says Silvia Bello of London's Natural History Museum, who researches the evolution of human behavior. In fact, we can't even say whether some of the early humans that were eaten were hunted, or died of natural causes and were then turned into meals. And every instance of cannibalism would have happened under different circumstances, Cole says. But the new data should be taken into account when analyzing cases of prehistoric cannibalism, Rougier says.

After all, understanding why early humans sometimes ate one another will help us better understand their behavior, beliefs, and social interactions. Plus, there's something morbidly engrossing about Neanderthals butchering hominin bones in a cave thousands of years ago — and that perverse fascination is what drew Cole into studying this in the first place. "It's like a car crash," he says, "you can't stop looking."