SEOUL — One of my earliest memories is of discovering that a hard-boiled egg, when halved and with the yolk removed, doubles as a tiny bowl for a few strands of naengmyun noodles.

My "naengmyun boat" was always my first bite of the North Korean signature dish — buckwheat noodles in ice-cold beef broth garnished with pickled radish and a halved boiled egg — that my grandparents and I had for lunch every Sunday after church while I was growing up in Seoul.

For my extended family, the cold noodles were a taste of home. For me, they have been a part of my life since even before I grew teeth.

Pyongyang naengmyun ("naeng" rhymes with "hang," and "myun" rhymes with "young") was relatively obscure, mostly sought after by families of North Korean refugees like mine. But now it has been catapulted to international fame — thanks to North Korean leader Kim Jong Un.

Pyongyang naengmyun's subtle, clean flavors contrast with the sweeter South Korean version's heavy seasoning and garnish. Those who try it for the first time can find it bland and will often cut the noodles with scissors because they're so chewy. But connoisseurs know that a dash of vinegar draws out the richness of the broth and that cutting the noodles ruins the consistency.

Two months ago, Kim brought the noodles from Pyongyang to his first meeting with South Korean President Moon Jae-in in the truce village of Panmunjom in the demilitarized zone between the two nations.

"There is a lot of attention on our dinner menu for tonight, so I brought Pyongyang naengmyun for you from a long way," Kim told Moon. Then, in a gesture of bridging the gap between the countries, he quipped: "Ah, I probably shouldn't say it's so far. I hope you enjoy it." 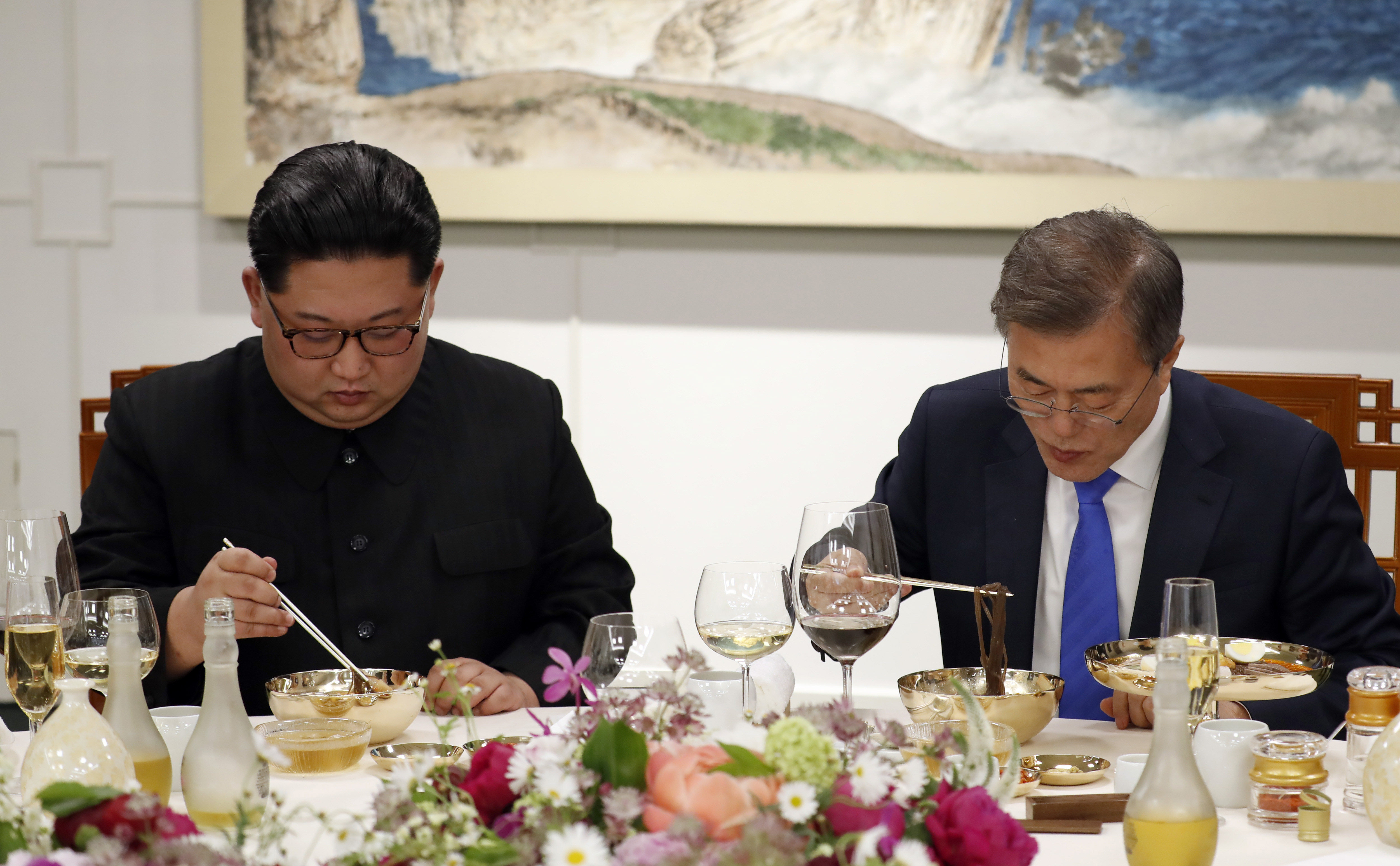 The image of the two leaders eating Pyongyang naengmyun ­together went viral, and so did Kim's comments. The cold noodle dish quickly became a symbol of diplomacy and history in the making — and it drew so much attention that Pyongyang naengmyun restaurants were immediately bombarded with long lines and national and international news coverage. It is already becoming this summer's most popular dish.

As the Koreas inch closer than ever to possibly declaring the end of the Korean War, I've been thinking a lot about the prospect of reunification and what it would mean for families whose lives were forever upended by the war.

Many of those families have a relationship with naengmyun that is similar to mine. I met one of them in Seoul this week to learn what it takes to make Pyongyang naengmyun for the masses.

"When I was in college, I worked part time at my father's restaurant. At the time, I met many elderly North Koreans," Kim Yoo-jung, 40, whose family has run Pyongyang Myunok restaurant for four generations, told me. "They would come to our restaurants and run into people they hadn't seen since they fled the North during the Korean War. From time to time, I would see distant relatives reuniting at our restaurant."

For families like ours, the dish has long elicited nostalgia for a unified Korea. For me, it symbolizes the tenacity of my great-grandparents and the pains of war and resettlement that have been woven into my family's identity through generations.

Before the Korean War, my great-grandparents were among Pyongyang's elite, living in the heart of the city. As communist leadership took power in the North, my great-grandfather decided to resettle his family in Seoul. He fled first to find a home for his wife and five children — the oldest was about 11. 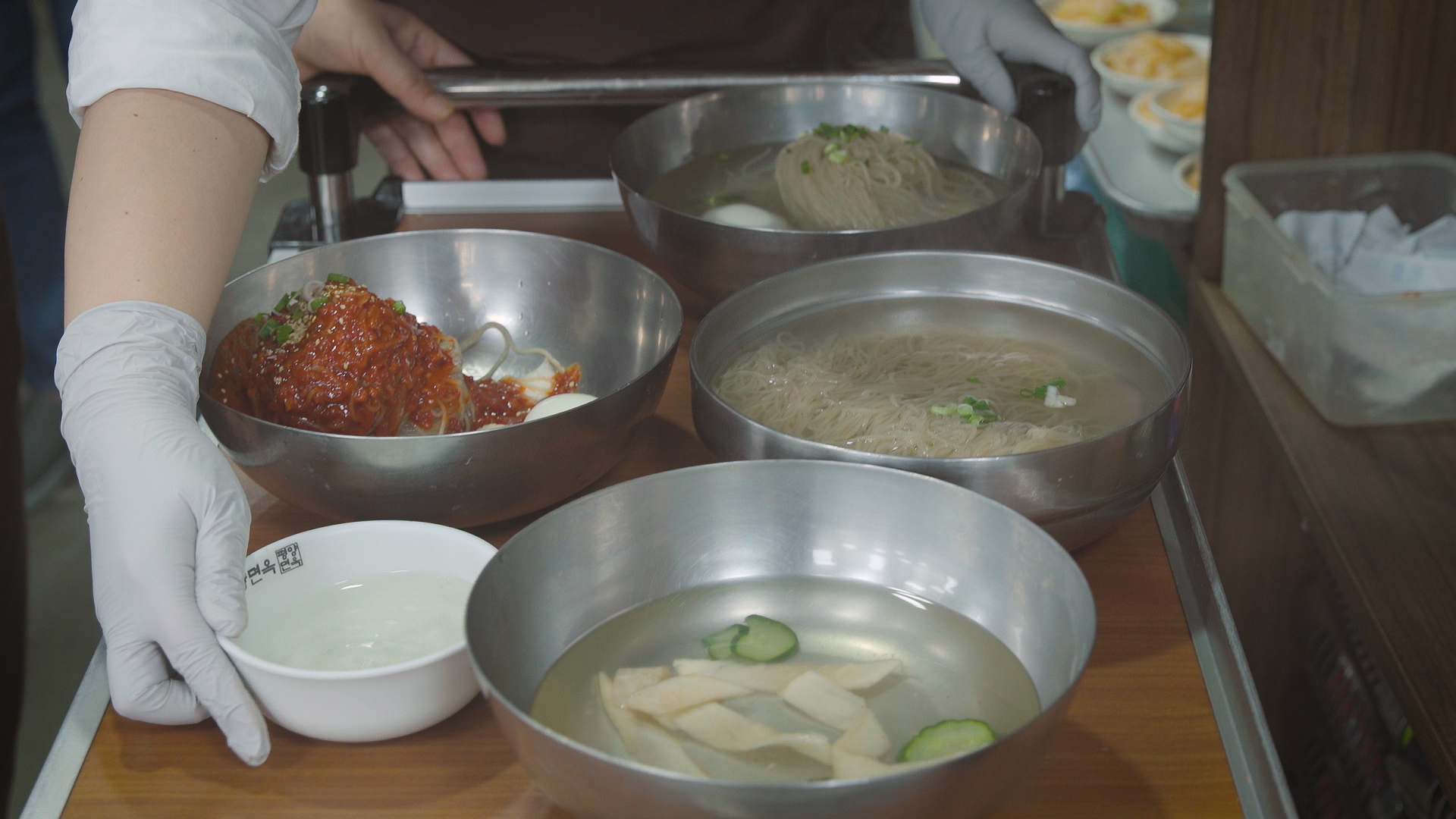 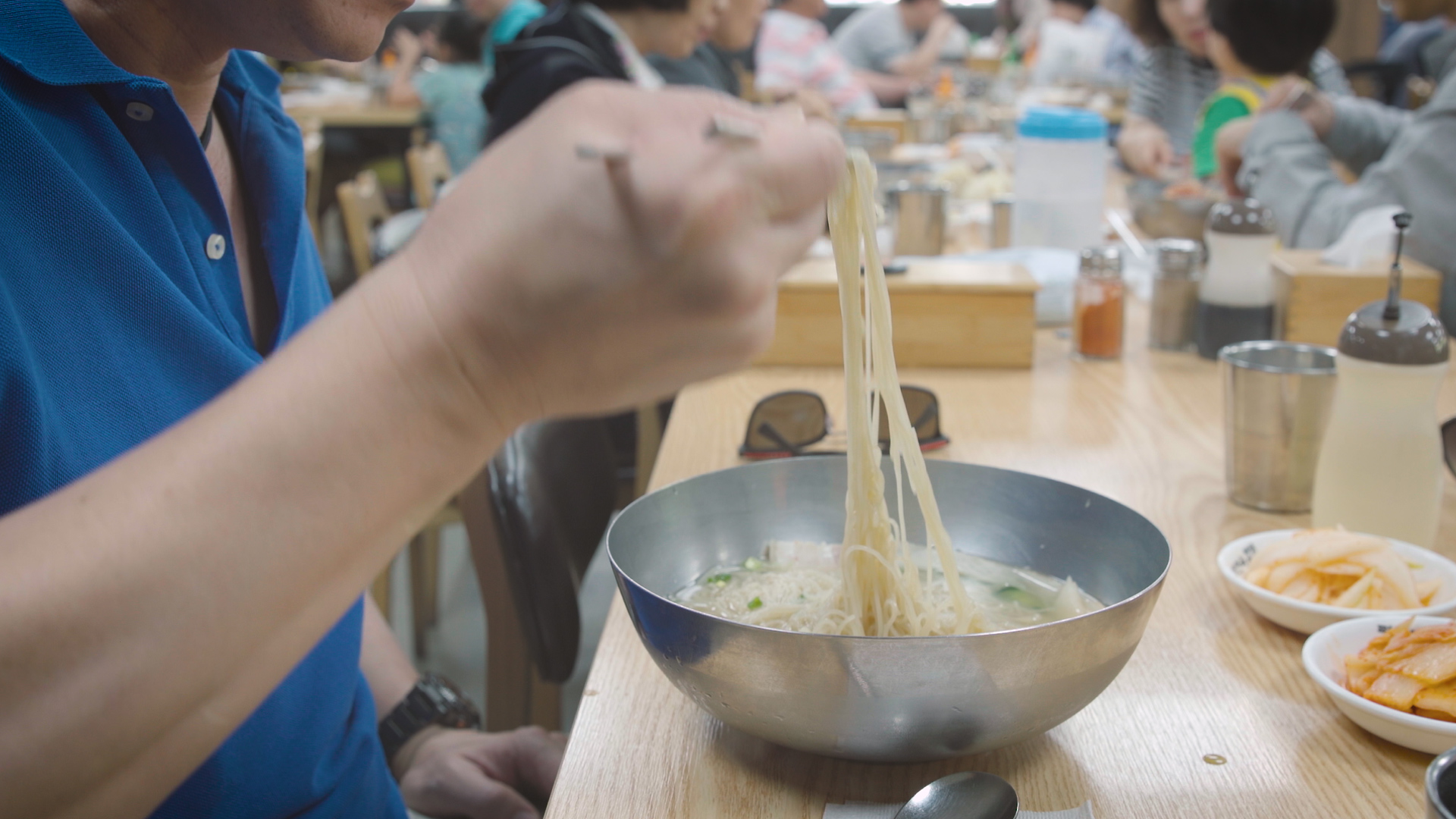 But before the family could reunite in Seoul, North Korean troops stormed the South in June 1950, and war began. My great-grandmother lost all contact with her husband and embarked on a grueling, three-year journey to find him. With her five children and another relative in tow, she bartered her belongings for food and passage.

Pyongyang naengmyun was an essential part of the family's resettlement in the South. In naengmyun restaurants run by displaced North Koreans, my great-grandparents found a community and a second home.

One of those gathering places was Woo Lae Oak, which
my great-grandfather's friend opened and which has a location in the United States. Another was a naengmyun restaurant named after my great-grandmother, which a relative operated in Pyongyang and then reopened in Seoul on resettling there.

It was my great-grandfather who found out about Eulji Myunok, a restaurant now run by descendants of North Korean refugees, which remains our family's go-to spot nearly two decades after his death.

So much of my childhood was spent at that restaurant. As a baby, I played with the noodles while my family ate Sunday lunch. When I started eating solids, the restaurant gave me a free small bowl of naengmyun. I was proud when I grew old enough to eat a full, paid-for bowl of naengmyun. 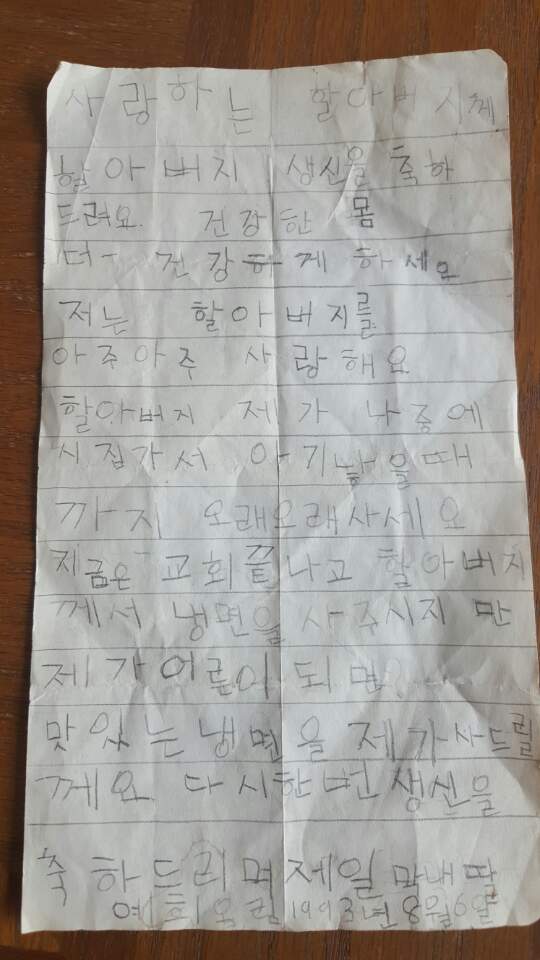 A letter the author wrote to her grandparents when she was 5. (Michelle Ye Hee Lee/The Washington Post)

For as long as I can remember, this dish has been synonymous with family. It was such a part of my formative years that when I was 5, adulthood meant that I could afford to buy naengmyun for my grandparents.

"Dear grandpa, who I love very, very much, happy birthday," reads a letter I wrote him, which still hangs on my grandparents' fridge. "I hope you have a long, long life, so that you can see me get married and have children. Right now, you buy me naengmyun after church. But when I am an adult, I will buy you delicious naengmyun. Again, happy birthday. I love you."

Several years ago, I was able to keep my promise. I now treat my family to naengmyun every time I visit Seoul.

Much of my family now lives outside Korea, but we come together as often as we can for cold noodles. Every relative who visits Seoul makes it a point to eat Pyongyang naegmyun with my grandparents.

Our family recipe rivals the ones at the restaurants. I tried my hand at it recently when my sister was visitingand asked me to make it for her. I have not yet recovered from the trauma of my underwhelming first attempt.

My great-grandfather is buried between Seoul and the 38th parallel. Nearby is the original location of Eulji Myunok.

The restaurant is a necessary stop on our way back to Seoul after paying our respects.