When my mom died in 2007, I started a blog for the Indian aunties of my hometown of Dallas, friends of my parents who'd set up there as my family had upon leaving India. I asked them to upload recipes for my friends and me that would remind us of home ― the palyas and dals made with the skill and fresh-ground powders unique to each aunty. Only, they confessed, they couldn't figure out the website's instructions. I realized I was really hoping they could turn back time to when my mom was still here ― not a task manageable via WordPress.

Today a new genre of Indian cooking aims to satisfy my decades-old longing, centered around the machine known as the Instant Pot, an electric pressure cooker so popular it's been credited with inspiring a religion of sorts. Cylindrical and large, the Instant Pot is a chimera of an appliance, a pressure cooker that plugs into the wall like a blender and can saute like a pan, simmer like a slow cooker and ferment yogurt with the force of the Madras heat.

A mainstream hit, the Instant Pot has found extreme fandom among Americans with roots in India. Facebook groups for Indian Instant Pot recipe-seekers hit the upper six figures in membership, making them some of the biggest in the archipelago of Facebook communities devoted to the gadget. The top-selling Indian cookbook on Amazon today isn't marketed to the tandoor lover or the vegetarian, but to the Instant Pot user, titled Indian Instant Pot. The device aligns so neatly with Indian food ― able to soften lentils, ferment yogurt, cook rice and dal at once ― it's as if it were made to seal the future of the cuisine. 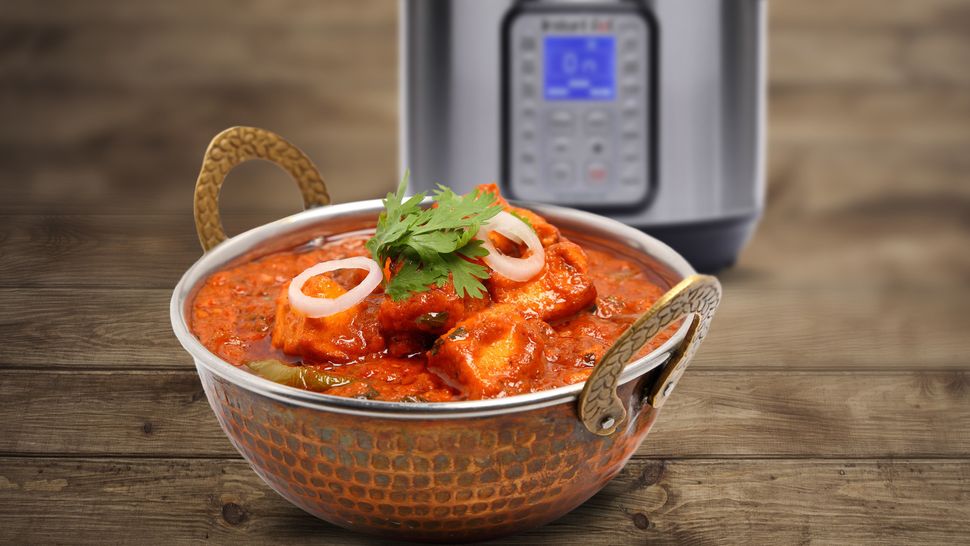 First known as a "steam digester," the pressure cooker comes to us from Denis Papin, a 17th-century Brit who reputedly wanted to help poor people cook wholesome meals. Though it was once as much a staple in European homes as it is today in Indian ones, the pressure cooker took on a new role as the packaged-food boom of the 21st century eased wealthier populaces away from home cooking. After World War II, the U.S. government subsidized the manufacturing and distribution of pressure cookers to encourage preserving and canning, yielding a small spike of interest that later recurred in the 1970s, during the early days of the health food movement. Last year, U.S. sales of "multicookers" more than doubled to $380 million, a new category whose creation analysts attribute to the success of the Instant Pot.

On the phone with the blogger Ashley Singh Thomas, a leader in the Instant Pot movement, I started to cry. She was telling me how her dad tests all her recipes ― that he's her toughest judge, for whom nothing is acceptable unless it's perfect. That level of precision made me think Thomas' work might finally cure my longing, achieve the impossible task the aunties couldn't: to stop time, bridge continents and bring my old world back. Thomas said she understood my emotions, that they weren't far from her own, or those of her readers, many of whom are children of immigrants. She later emailed me a quote from an Amazon review of one of her cookbooks that praised the Pittsburgh resident for "democratiz[ing] Indian cooking" in the face of parents who speak in untranslatable ingredient names, who measure in pinches.

Robert Wang, the engineer credited as the Instant Pot inventor, told me the device is meant for a "mixed society." He'd hoped to facilitate a comfort dish for each of the newest clans in North America: porridge for the Chinese, dal for Indians, beans for Latinos. Immigrants are born home chefs, "always looking at cost," Wang said. He cites his own family as an example. Born in China, he moved to Canada and married another Chinese-Canadian. His mother-in-law, he told me, wants the family to interact but prefers the setting of home, where costs are low. Food forces everyone in; no restaurant is good enough. Wang pointed to word-of-mouth culture as another reason for the bent of the Instant Pot's fan base. Saleswise, he guessed folks with dietary needs outpace any ethnic group. The company doesn't release statistics on its customer demographics, but Indian users are simply, he suggested, "the most vocal."

Arpana Satyu, a family friend and pastry chef who owns the Atlanta bakery Dutch Monkey Doughnuts, explained the draw on the basis of texture. "When you sit down and eat a meal with your family, it's all mushy. Indian food benefits from that kind of cooking," she told me, name-checking as proof the Asian-inflected former Jean Georges restaurant Spice Market in Manhattan, whose Michelin star shared billing with its bank of microwaves.

Plus, so many Indians "grew up with whistles as lullabies," as my second cousin's wife, Nandini, put it to me ― referring to the noise made by the Instant Pot's ancestor, the stovetop pressure cooker. Steam leaves the cooker's valve as a whistle, driving moms to the stove. It's "what you hear in the morning," Nandini told me. In her childhood home in Coimbatore, "we used to say five whistles, turn it off. Three whistles, count it off."

Nandini is my family's patient zero, the one from whom the Instant Pot mania spread. You know this is an Indian story because of the importance of a technically distant relative. Inspired by a cousin in California with kids, she bought her own Instant Pot for her family of four in January 2015. A year later, the tool hit the big time after Amazon dropped its $150 price for Prime Day, a sale that solidified the gadget's top spot in Amazon's ranks. Today no item is gifted more via Amazon wedding registries, or included more often in Amazon wish lists. Prime Day also helped Nandini convince my cousin Asha, and soon word traveled to the U.K., where cousin Priya, on the other side of my family tree, caught sight of Nan's many Facebook posts ― images of dal and chutneys and pulaos whipped up in less time than it takes to watch an episode of "Phineas and Ferb."

Now my family has Instant Pot stories, as we once had pressure cooker stories ― like the one about the relative who singed her face and chest so badly, she showed up at Thanksgiving a walking warning against the OG pressure cooker. One IP story I heard on a recent trip home starred a dal so good my dad and uncle couldn't believe the chef of the evening hadn't soaked the lentils overnight. High heat has its costs; the dish sat for half an hour, they said, before it was cool enough to eat. And while electric pressure cookers make steam explosions and singed torsos less likely, Urvashi Pitre, author of that best-selling cookbook Indian Instant Pot, told me the IP valve isn't foolproof. Even the slight chance of a burn might make a pressure cooker virgin think twice, she guessed ― another possible reason for desi dominance.

Generally wealthy and educated, Indian Americans also tend to live settled, large-homed, high-income lives. Lurking in an Instant Pot Facebook group, I inevitably see the faces of people I once knew ― friends I danced bharatanatyam with, now living respectable, kid-filled lives while I write articles out of an apartment too compact to hold the standard six-quart model. The Instant Pot I received as a tester for this story overwhelmed my counter and thwarted my cupboards; I housed it on my kitchen floor before checking it in on a flight to Dallas following a trial evening with non-Indian friends over a crowded meal of rajma ― a classic kidney bean dish. None of my guests had heard of the Instant Pot. Nor had I seen the device until this story brought one my way.

My point of reference for all things Indian is my best childhood friend, now a physician with a new baby who inherited an old-school pressure cooker the day she was married. Even then our paths were different ― my apartment puny compared to hers, my life unsettled. Visiting her Chicago high-rise, her wedding fresh in the air, I spotted the beast in her pantry. I listened with surprise as she told me she cooked entire meals for her and her husband in the pot: palyas and rice and sambar, as her mother had.

My dad and I try out the Instant Pot, above.

Longing, I realized, may not be solvable en masse; for each of us the thing longed for is slightly different. The rajma at my Brooklyn dinner illustrated this divide. My guests loved it (an Ashley Singh Thomas recipe), but I found the results too tasty ― restaurant-quality, actually. My parents used our pressure cooker minimally, steaming mostly idlis (fermented discs of rice and dal) and lentils, the latter to be simmered in a saucepan afterward. I contrasted the disorientation the rajma gave me with my feelings at an earlier meal, cooked for friends before the Instant Pot came into my life ― a batch of buckwheat crêpes, an echo of Sundays of my youth when my mom stood at the morning stove to pool spoon after spoon of dosa batter for my brother and me.

A cabbage dish by Pitre went awry, too. The recipe I purchased ingredients for turned out to be impossible to find again online. My brother, dad and uncle helped me decide on a passable substitute Pitre recipe. I set the timer for two hours instead of two minutes, though my dad mentioned a few times the value of reading user manuals. Together, we ate the soggy cabbage, removed at a point we felt must be time enough, despite the protestations of my brother, who sticks to plans in play no matter how strong the argument for changing tacks. (We call him "the boy on the burning deck," for the Felicia Hemans poem about a kid staying put on a ship in flames because of prior instructions not to move.)

In the end, no Instant Pot recipe tasted like home so much as certain actions brought me there ― the pooling of batter, the gathering of friends, the love and irritation that comes with family. Each instance took me back to before my mom died, before the dosas went away. I almost felt as if nothing had changed.