In 2008 the USMC took dealing with the improvised explosive devices threat into their own hands and what they ended up with was a cost effective and highly adaptable jamming and communications intelligence pod that should be a model of how to satisfy future urgent "niche capability" needs.

It is called the Intrepid Tiger II and it looks very much like a ALQ-167 threat simulation pod used for training by NAVAIR and its "Red Air" contractors. The pod itself is about the same size as a AIM-7 Sparrow air-to-air missile, with various aerials emitting from its tubular body. This configuration makes the pod capable of being deployed aboard the AV-8B Harrier jump-jet and its aerodynamic impact on the jet's performance is so anemic that the aircraft's flight computer does not even need a software update to carry it, it just treats it as an AGM-65 Maverick missile.

During the system's rapid design phase, engineers made use of off the shelf parts in order to bring the program's costs down and shorten the urgently needed pod's developmental time-span. The first eight pods cost about a million dollars each, which is a bargain considering that anything with the words "new" and "military" next to it usually has an appalling price tag. When you look at what the Corps gets for that million bucks, Intrepid Tiger II is an all-out steal.

The Intrepid Tiger II pod works by actively monitoring for enemy communications at certain bandwidths and then selectively jams frequencies that are being used by the bad guys once they start talking. This capability allows for a secondary communications intelligence ability, so the pod can be used to actually eavesdrop on the enemy's chatter as well as disrupting it. The pod can also actively jam known bandwidths that are commonly used to initiate IEDs, such as those used by cellular phones or garage door openers.

What makes this pod even more tactically potent is that it can either be used in automated modes set by the pilot in the aircraft that is carrying it or its information can be data-linked to a ground station for exploitation in real time. This means that the pod can be remotely controlled and the intelligence it gathers can be listened to and analyzed by experts who are fluent in local dialects. They can also gauge the effect of Intrepid Tiger's pinpoint jamming and change disruption methods to get the best effects in real time. Needless to say, having a ground station with experts in jamming and linguistics providing "virtual over-watch" for a bunch of Marines moving through a high-threat area on the ground is a godsend for commanders.

Eventually this remote ground station will be downsized into a unit that is the size of a hardened laptop computer, thus a couple of well trained Marines in a moving Humvee could listen in on enemy chatter and make their communication go black at will. 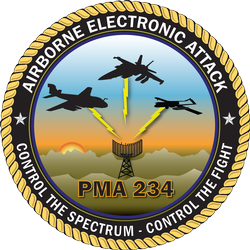 Out of the need to suppress insurgent planted IEDs and jam their communications in Afghanistan has blossomed into a new set of possibilities for the Intrepid Tiger program. Because it uses new "open architecture" software, the system can be rapidly adapted with new capabilities and hardware, all at low cost. New variations will have electronic intelligence capability, used for locating radars and other threatening emitters, and its communications jamming capability will be replaced with hardware capable of jamming and even hacking air defense nodes and radar systems.

The USMC sees the pod's growth potential as a way to deploy surgical jamming when their EA-6B Prowlers or the Navy's E/A-18G Growlers are not available, which is a common situation when a portion of a Marine Air Group is deployed aboard an amphibious assault ship. These pods, and their associated ground or ship based interfaces, could potentially give not just the Marines, but the Navy and the USAF the ability to deploy a cheap and scalable intelligence gathering and electronic warfare option with tactical aircraft units around the globe. This would give individual units the ability to fight without the need of supporting low-density, high-demand assets such as dedicated high-end surveillance and jamming aircraft.

The system is so capable, even at this early stage of its career, that many say it is better at jamming enemy communications and IEDs than the EA-6B Prowler, which carries the AN/USQ-113 communications jammer. This system is much more powerful than the Intrepid Tiger but it is also much less surgical in nature. Metaphorically, the AN/USQ-113 is a cluster bomb, while the Intrepid Tiger is a laser guided rocket. It is even referred to as "precision jamming" by the Marine Corps.

Intrepid Tiger, in various formats, will hopefully migrate to other aircraft, including the F/A-18 Hornet and Marine helicopters such as the AH-1Z Cobra, in the near future. Even the RQ-9 Shadow unmanned aircraft system that is well loved by the USMC will be getting Intrepid Tiger in a smaller twin pod format. This will allow Marine ground formations to have persistent communications and IED jamming and communications surveillance over long periods of time.

Just to give you an idea of how good this system is, I was talking to a Joint Terminal Air Controller recently about his time in Afghanistan and when asked about this system he said simply:

"I would rather have it hanging on one of the Harrier's prized weapons stations than a bomb, it is almost magical in what it can do for us against the enemy."

Additionally, you almost never hear "cheap" and "revolutionary" in the same sentence when it comes to cutting edge military hardware, but that is exactly how a Harrier pilot described Intrepid Tiger's capability to me last fall. With such great reviews and such a low price tag, the rest of the DoD should take a hard look at Intrepid Tiger and the minds behind it, because sometimes less is truly more.