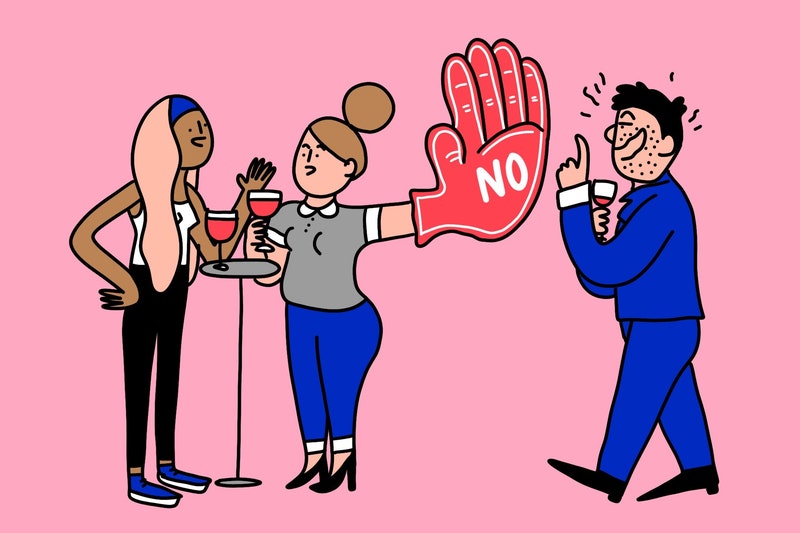 Meet-cutes don't work. The rom-com lover in me wishes desperately that they did, but alas. Just as we don't live in a world where JLo is believable as a dog walker, we also don't live in a world where approaching a stranger in the produce section is romantic. So how are you even supposed to meet people? My answer is… slowly. That's the answer that no one seems to want to hear. People in movies hit on strangers in public places because they only have 90 minutes to live out a whole dramatic arc. (Perhaps with the exception of When Harry Met Sally, no one wants to watch a couple meet multiple times and slowly realize that they're more than friends.) In real life, hitting on strangers doesn't usually get you anywhere.

That doesn't mean that you can never talk to a stranger again without an introduction—this isn't Regency era England. You just have to be aware of the effect you're having. The golden rule of all attempted romantic encounters is: Take "no" for an answer. The first time. And not just explicit nos. There are some not-so-subtle things that also mean "no," and you should learn to listen to those, too.

If you decide to approach a woman in a non-horny setting—e.g., at the gas station, at the scene of an accident you just caused, or at a cafe where she's reading quietly by herself—then you need to be extra careful to read the situation. Again, these places might seem ripe for meet-cutes in movies (the juxtaposition of romantic moment and unromantic location!) but in the real world, they're places where women are usually alone. This dynamic probably makes you, the approacher, feel less threatened, but it makes her, the approached, feel like she's in the kitchen in Jurassic Park with velociraptors scraping at the door handles. If she keeps going about her business even as you try to approach her, that's a great sign that (surprise!) she is not interested. Let her carry on with her day. Likewise, if she's giving you short, one-word answers, and doesn't ask you any questions about yourself, that's also a pretty good sign that she's not interested.

Say you're shopping at Pier One and you approach a nice-looking lady. Say she plants her feet, stays in one spot, and seems genuinely riveted (not scared-riveted) by your commentary about how you simply don't "get" throw pillows. Okay. Sure, keep the conversation going, but if she keeps on walking, do not follow. Never follow a woman! If you've left a woman without an easy escape from interacting with you, you're doing it wrong. This is also why you should never, ever, ever hit on a woman while she's at work. She's not interested in you—she's doing her job. She's being paid to be nice to you. At one time or another we've all felt a connection with the Trader Joe's cashier who compliments us on our choice of turkey corn dogs, but they don't really care. They're being paid to make people feel like the grocery store is a nice place to be. Your hairdresser is also not hitting on you; She's trying to make sure her Yelp reviews don't dip. I'm sure that hitting on someone in any of these scenarios probably seems "harmless," a word men throw around with abandon. But it's not. It can actually be really scary for women. If you approach me in the dentist's waiting room, I automatically assume you're a serial killer. And putting aside the Bundy extreme, it's really annoying to have to pause your day so that a man you've never met can tell you that based on literally nothing but your appearance, he wants to "get to know you." If it would be annoying for a man to stop and talk to you, a man, during an activity, then don't do that to someone else.

There are, of course, places where it is much more appropriate to approach strangers. To some extent, bars, concerts, sporting events, festivals, parties, weddings and the like are places where being hit on—while still not always welcome—is expected. Getting hit on in these venues and events is simultaneously more terrifying, because you're more likely to be drinking, and less terrifying, because I'm less likely to be there on my own. Women often use our friends as safety buddies when we go out. I can almost guarantee that at one point or another, you've seen women go to the bathroom as a group in order to save one of their friends from a guy who won't leave her alone. Not only are men less likely to do creepy shit in front of other people, but just having friends nearby in a bar gives women a slew of escape plans. If a woman ever tells you that she has to go "find her friend," let her go. Again, do not follow her; Do not offer to help her find her friend. She's not being "forced" to go back to her friends. We have plenty of signals to let our lady friends know when we're having fun with a guy, or if we need help Irish-goodbyeing his ass. If you're dancing with a girl and her friend keeps stepping in or grabbing her hand to pull her away, her friend is not "cock-blocking" you: Your dance partner has probably been trying to get away for awhile. And even without friend-assists, there are a lot of signs you can watch out for. If a woman says she's going to the bathroom and she doesn't come back, don't circle the bar seeking her out. And if you offer to buy a woman a drink at a bar, and she says isn't finished with her last one, that mean "no." Do not buy her a drink then, and certainly don't offer to buy the next one. Lastly, if a woman says that she's tired, or that she thinks she's just going to head home, that is not an opportunity for you to invite yourself, or to beg her to stay out. Say "Okay, get home safe!" and let her leave unaccosted.

Women do give you clues, and often they're pretty clear. While many men have good intentions when hitting on women, they often seem to misunderstand just how terrifying it can be to be approached by a stranger. A lot of men also underestimate just how many bad experiences most women have had turning men down. It's not that we don't wish we could tell you all, straight-up, "leave me alone" or "fuck off, Beyoncé is playing right now and no man should be speaking until she's done." We just know that if we're boring enough and keep giving one word answers, you might think it was your idea to leave us alone, which is less likely to make you angry, aggressive or even violent. There's a pervasive myth that persistence is sexy, but it's really creepy. I promise you that if you misread the signs and leave a conversation too early, a woman who is sincerely interested in you will just come find you across the bar.