The 2016 election is just a few weeks away and many of us already have mail-in and sample ballots, packed with local candidates, ballot initiatives, questions, and judges. Whether you're trying to suss through California's 223-page voter guide or something less overwhelming, a few tools can simplify the research process so you don't need a law degree to make an educated vote. 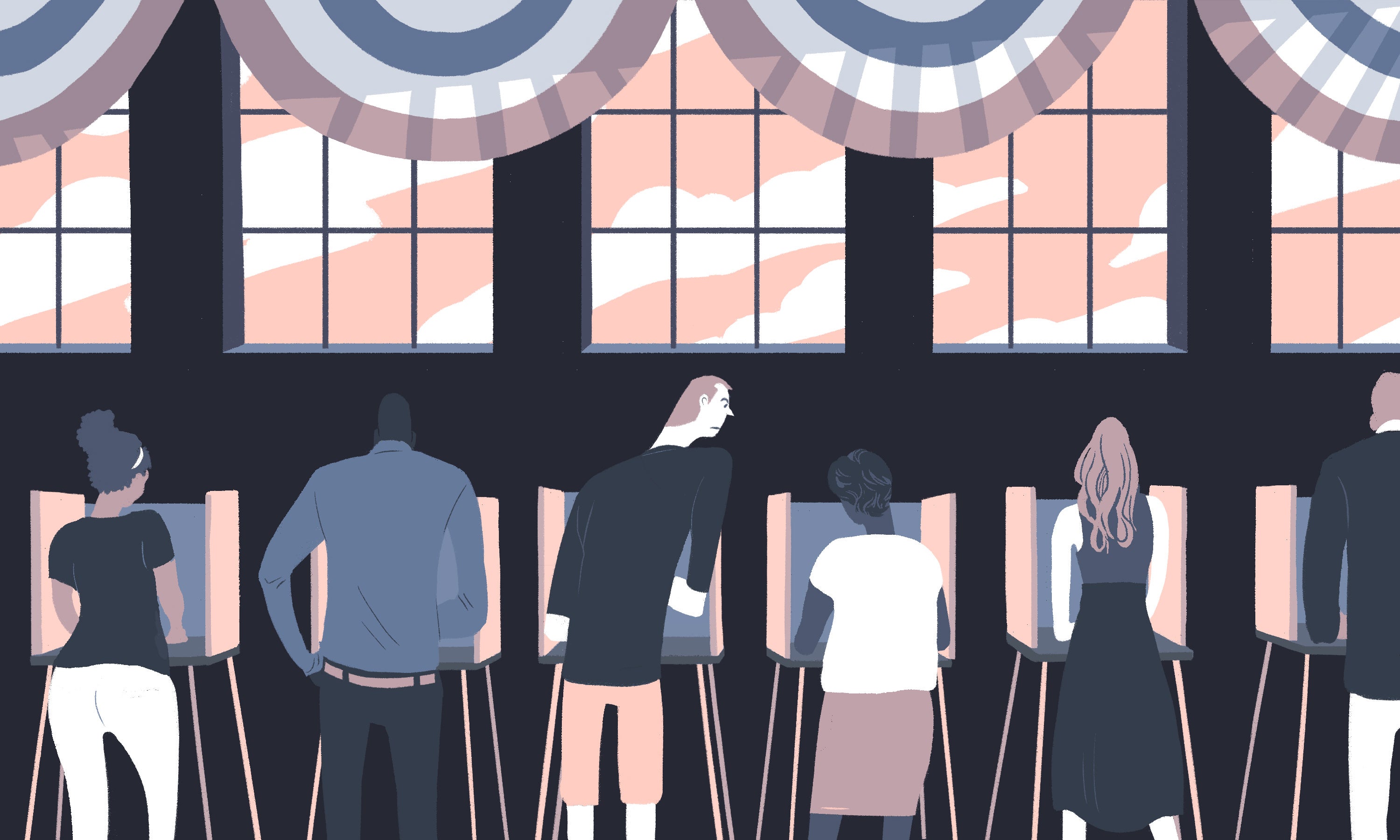 The presidential race is just one of dozens on the ballot this November. The House and Senate are...

Get a Quick Overview of Your Congressional Options

After the presidential election, which you've probably already decided on, the next section on your ballot asks for your vote on congressional candidates. This means you'll be voting members into the House of Representatives and the Senate.

One of the simplest tools to figure out which candidates match your interests is Vote Smart's Vote Easy quiz. Here, you'll answer a series of questions about your views on topics ranging from abortion to social security. As you answer each question, Vote Smart gives you a best match for both the House and Senate based on your views. When you click a candidate's profile, you can get a closer look at how they've voted (if they're already in office) or how they responded to the same questions you answered. While the Vote Smart's a little archaic in its design, this is the simplest starting point for most of us.

While Vote Smart is easy, you might want to do a little more research beyond a quiz.

Finding the right people is just part of the battle. In several states, you'll also be voting on tons of different ballot measures, amendments, and questions.

Learn About Your State Ballot Measures 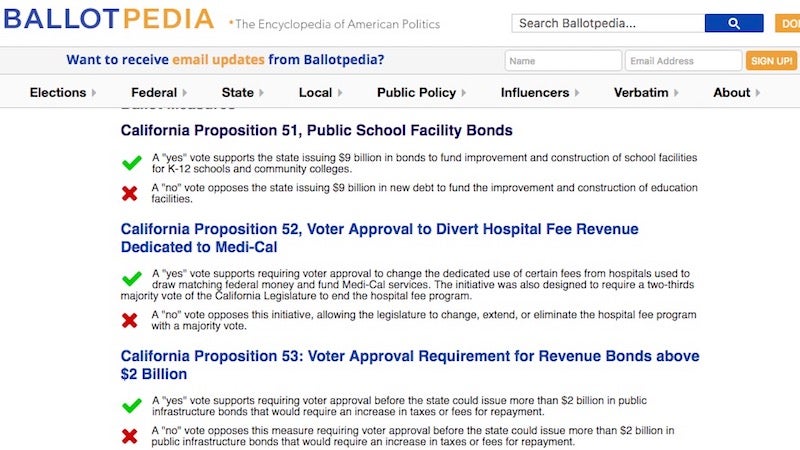 Depending on what state you live in, you might have special measures on your ballot in the form of amendments, propositions, or initiatives. While these often seem like simple Yes or No questions, there's a lot more going on than meets the eye, so it's worth researching before you cast your vote.

The best place for an overview of all your state ballot measures in one place is Ballotpedia. Just type in your address and zip code, and it displays your sample ballot. You can then click on any initiative to learn more about it.

Your ballot frames an initiative as a Yes or No vote, but it's important to read between the lines. Ballotpedia will typically give you a breakdown of the entire text of a measure, as well as arguments for and against it. Remember, when you're reading about these measures, it's not just about whether you agree with the idea of a measure, it's also about whether you agree with how the measure gets implemented. For example, marijuana legalization measures, which have been popular over the last few years, often fail not because people don't agree with the issue as a whole, but because the initiative itself is not terribly well thought-out, leaving loopholes or unclear uses of revenue, or poorly worded questions that are easy to vote against your intention on.

It's also worth pointing out that 11 states, including Washington, Delaware, and Oregon, also have gubernatorial elections this year. Many states also have races for Secretary of State, Attorney General, and other local offices. Again, Ballotpedia will give you an overview for many of these, but with smaller elections, you have to do your own independent research because it's generally light on information on smaller elections or local candidates and county or regional offices.

If you can't decide how you feel or you think there's not enough information about a ballot measure, you do not have to vote on every measure. Feel free to leave any section blank.

Your local newspaper or TV station has likely hosted debates and gone through the pros and cons of almost every ballot measure and local race in your area. For example, my local PBS station hosted several debates on ballot measures. Your mileage will vary here, but it's worth a look regardless. Ballotpedia has a link under each measure to the full text, though in most cases you'll need a firm understanding of the law and a couple cups of coffee to get through it.

Learn About Your County Initiatives and Candidates

Ballotpedia is great for statewide ballot measures but it does not do a great job of pulling up your city or county initiatives. Typically, these measures deal with local issues like affordable housing, park funding, or transportation infrastructure.

You'll need to saddle up and dig into local newspapers and community blogs for this one. You can also contact your local election authority for more information. If you're not sure how to get a hold of them, Vote Smart has a list with web sites and phone numbers. Once you do, they'll typically have more information about the candidates and initiatives.

Local newspapers will usually run a pro/con article on your local issues before the election (if they haven't already), so you should be able to find plenty of information with a quick search on your local paper's web site, or by looking for smaller sites of interest to and managed by people in your community. If the initiative is controversial, you'll also find op-eds in newspapers and on local blogs. In bigger cities, larger newspapers will also usually take a side and list their recommendation, which is worth at least considering when you make your decision.

Of course, newspapers are a dying breed, but that doesn't mean you don't have options. Vote411 often has details about local elections and your local country web site should have everything else you need, even if it's very small.

Aside from the initiatives, you might also see board member elections on your ballot. These are usually for a variety of local positions, ranging from water departments to school school districts. Thankfully, Ballotpedia also tends to pick these up in its sample ballots, so you can at least get an overview of each candidate. If it doesn't, a quick Google search should bring up all the information you need.

You'll already have to dig deep just to find any information about most of these measures, but if you want to go further, you'll usually find links to the full text of any initiative on your state election board's web site. It's a little late at this point, but you may also be able to catch debates between candidates or ballot sponsors at your local neighborhood council meeting. Worst case, consider heading to your local library—the folks there may not have an opinion or recommendation, but they may have knowledge of local issues, or be able to direct you to more resources on those issues.

What to Do About All Those Judges

Finally, there's a good chance your ballot has a bunch of judges listed on it. This is probably the most confusing part.

In many states, you can vote to remove a judge in what's called Retention elections. These happen in 21 states, including Arizona, California, Oklahoma, and South Dakota. This means that you're voting to remove a judge from office. That's it. If you see only one judge listed on your ballot, it's likely a retention election. Generally speaking, the only reason you'd bother to vote to remove a judge is if their voting record is so unpopular that it actually made the news in some form or another. Several states, including Ohio or Utah have breakdowns of each judge's performance over their career. This is a good place to start your research. The Bar Association is some counties, like King County in Washington, even do a rating system based on qualifications, so that's worth a look as well.

If you're voting between two people, that means you're voting for who will become a judge. Your best bet here is to search Google for both candidates. There's a reasonable chance a local paper, law blog, or legal magazine will have a comparison between the two that details their experience, priorities, endorsements, and education. This is another time to consider your local library, where you can read up on their judgement record on cases that may interest or matter to you, and how their decisions have influenced your community.

You're usually starting out in the weeds for a judicial election, but you can always dig deeper. Ballotpedia has a page that details many of the elections. You can also often find more information from your state's Bar Association.

With that, you'll have a brain full of ideas and opinions. It might sound like a lot of work, but I was able to plow through through the 32 ballot items on my ballot in about half an hour, so you won't have to dedicate as much brain space or time as you might think.