For New Yorkers, few coffee cups come close to the Anthora, the classic blue-and-white cup decorated with a Greek amphora urn and the words "We Are Happy to Serve You," first introduced in the '60s. It's called the Anthora, the legend goes, because that's how designer Leslie Buck pronounced "amphora" through his thick Eastern European accent. 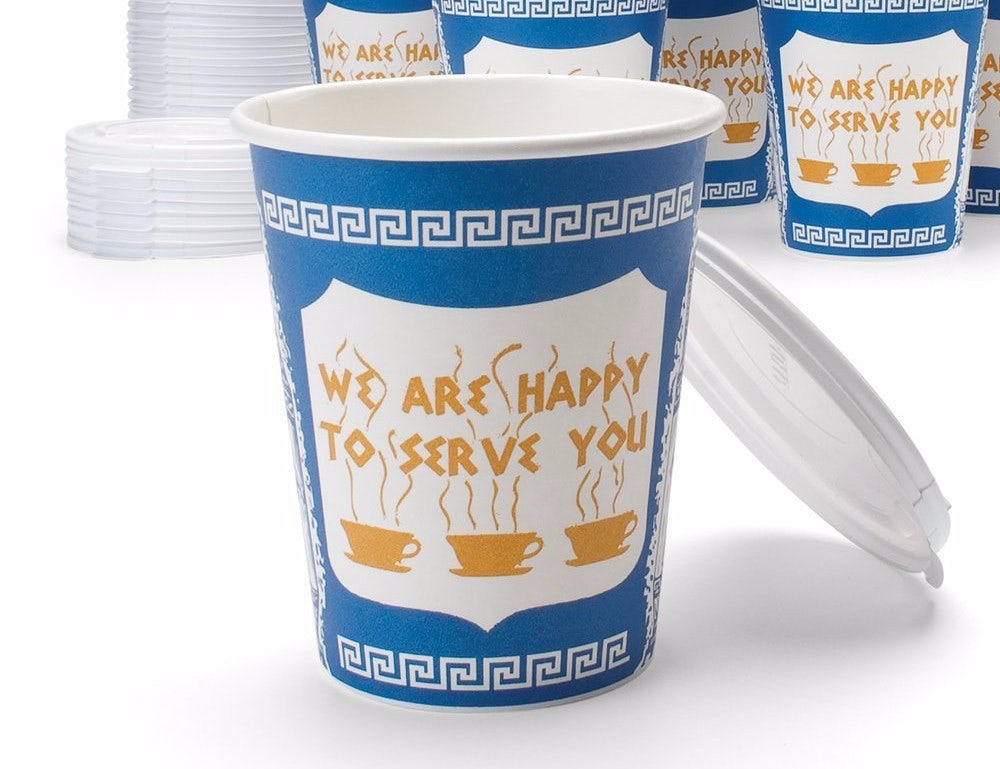 "When it comes to bodega/deli coffee, I prioritize establishments with Anthora cups," said Bill Whitley, of Brooklyn. "If I got a tattoo I'd seriously consider the Anthora design." Photographer Nick Koudis already has one such tattoo. "When I moved to California, my other New York transplants and I would talk about how much we miss them," says Heather Teysko, who currently lives in Spain but thankfully owns a ceramic Anthora she bought on Amazon.

Tragically, after Starbucks infiltrated the city in 1994, sales of the Anthora plummeted, and production halted in 2006. It restarted in December 2015, but in the nine years it was gone, a slew of knockoffs flooded the market.

Which may be why, these days, it's hard to tell a true Anthora from an imitation.

"Looks like the Anthora got a makeover!" tweeted entertainment writer Jordan Hoffman on March 28. He posted a photo of a familiar-looking blue and white cup, but there were a number of conspicuous differences: No amphora vase! A scroll in place of the three steaming coffee cups! "It's Our Pleasure to Serve You" instead of "We Are Happy to Serve You" — and, most egregiously, with regular Es instead of Sigmas!

Other unauthorized variations on the Anthora include depictions of the Parthenon, a discus-thrower, a harpist, and (my personal favorite) a woman bathing a nude man from a golden jug. Their slogans are always close, but not quite right: "We Are Pleased To Serve You;" "Service Is Our Speciality; "Happiness to Serve You."

Dart Container Company, the conglomerate that owns the Anthora as well as that other cup institution, Solo, confirmed that the original Greek-inspired design has not been updated. "The Anthora Cup design is owned and a trademark of Solo Cup Operating Corporation, and is officially registered as such," wrote the manager of corporate communications, adding that imitations infringing on the trademark are often "the subject of legal action."

In the nine years it was gone, a slew of knockoffs flooded the market

"I'm glad to hear that it's not an official change," said Hoffman when informed that his tweeted cup was a counterfeit. "I thought that the version I saw had a very lazy font. If you're going to change a classic it needs to be done right."

It's true, however, that the Anthora has become somewhat of an endangered species in a city with thousands of fancier coffee shops serving up matcha and organic cold brew in their own branded containers. Lucky for us, Redditors have taken pains to compile a thread of locations that carry them. You can also order Anthora cups in bulk online.

My all time favorite- the Anthora design cup. https://t.co/fVSJCcGGSXpic.twitter.com/7lHjgASmPf

Amazon and other sites also stock the glossy red Solo that held the first taste of grain alcohol or warm keg beer for anyone born after 1980, dentist office cone cups, these fantastic dentures cups, and tantalizing fry cups with a picture of fries on the outside (so meta). No doubt they all have their imitators, and their local groupies. For all we know the dentures cup might be the Anthora of southwestern Florida. Every city has its icons.