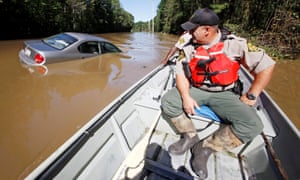 With floodwaters from Hurricane Matthew on the rise, at least one North Carolina city appeared near chaos Monday, its police station shuttered and sporadic gunfire in the air, and authorities worried that more communities could end up the same way.

The storm is gone, but it left behind a water-logged landscape where flooding was expected to persist for the rest of the week. At least three rivers were forecast to reach record levels, some not cresting until Friday. In many areas the scene resembled a repeat of Hurricane Floyd, which caused $3bn in damage and destroyed 7,000 homes as it skirted the coast in 1999.

Officials were concerned that other cities could suffer the fate of Lumberton, a community of 22,000 people about 80 miles from the ocean.

The Rev Volley Hanson worried that stress from the lack of running water and electricity might push people over the edge. Robeson County, which includes Lumberton, had North Carolina's highest violent crime rate in 2014.

"The cash is going to be running out. We've already got street vendors hawking water, Cokes and cigarettes. Cigarettes are at seven bucks a pack," Hanson said. "It's nuts here, and it's going to get worse."

The cash is going to be running out. We've already got street vendors hawking water, Cokes and cigarettes

The storm killed more than 500 people in Haiti and at least 22 in the US, nearly half of them in North Carolina. At least three people were missing.

The full extent of the disaster in North Carolina was still unclear, but it appeared that thousands of homes were damaged and more were in danger of flooding.
One silver lining may be that emergency planners now have sophisticated models that can precisely determine a river's crest and pinpoint which buildings will be flooded. But even those models have their limits. They cannot predict when a levee or a dam will fail. A levee in Lumberton appeared to fail overnight, but officials later concluded that floodwaters had flowed around it.

About 1,500 people had to be rescued early Monday. Most of them were in knee-deep water, but some fled to rooftops as the brown waters swirled around them.
Rescuers still have not made it to all the submerged cars or figured out exactly how many people are missing or dead, county emergency management director Stephanie Chavis said.

"I've been here right at 28 years," Chavis said. "This seems to be the worst one we've had in my career."

Damien Mosher and his fiance were trying to make it to their coastal home in South Carolina but were detoured to Lumberton because Interstate 95, a major artery for the east coast, was closed. Shelters turned them away because of their two dogs so they ended up in the police department parking lot, listening to occasional gunfire around them. The department's doors were locked, and most of the 75 or so officers were out helping with traffic or rescues.

The Lumber river crested 4ft above its record level Sunday in Lumberton and was forecast to remain there until Saturday.

River flooding was happening in other places, too. In the tiny town of Nichols, South Carolina, downstream from Lumberton, at least 100 people spent the night on the third floor of the town hall.

North Carolina Governor Pat McCrory pleaded with residents to heed evacuation orders and to be careful. The seven-day forecast of clear, cooler weather was good for cleanup but might lure people into a false sense of security.

"This is going to be a prolonged hurricane for us even though the skies are blue," the governor said.

Engineers had no estimate on when the interstate would reopen. Driving was difficult, if not impossible because hundreds of roads were closed, in some cases isolating entire towns. Dozens of school districts and East Carolina University canceled classes for the entire week. Nearly 1 million people in North Carolina and South Carolina were without power two days after the eye of the hurricane moved out to sea.

In addition to the 10 deaths in North Carolina, there were four in Florida and three each in Georgia and South Carolina. One death was reported in Virginia.

Authorities in coastal Georgia and South Carolina warned residents it may take days or even weeks to restore electricity and clean up all the debris. People who tried to go home but were blocked by authorities who said the damage was still too severe grew increasingly frustrated.

Maureen Miller, her family and dog finally did make it back to their coastal Georgia home. She now wishes she hadn't listened to the dire warnings to leave or drown after finding her house unscathed.

"I will never evacuate again," Miller said. "If we stayed, we'd be fine. I'm sure there are a lot of people who feel the same way."

Matthew's flooding in North Carolina was made worse by heavy rains in September. Many areas east of the interstate got at least twice their normal amount of rain in September, in part because the remnants of Tropical Storm Julia parked off the coast for several days.

That's a lot like what happened with Hurricane Floyd in 1999. Weeks of heavy rain preceded the storm.

"Floyd. That's what everybody is saying," said Blake Griswold, who was at a park watching a creek flow over its banks. "That was a 100-year flood. It's been 16 years, and we have another one."