On Friday, March 24, VICE on HBO will take you inside the exciting world of bionic technology, exploring the cutting edge ways in which humans are integrating computers into their bodies. The writer of this essay, Ian Burkhart, is one of world's foremost pioneers in this realm. Watch Ian's full story on VICE on HBO Friday at 7:30 or 11 PM.

I've always been fascinated with the promise of computers. Because of that, I make it a point to get the latest and greatest technology. Even as a kid, I was the one in the family who would set up our new electronics and computers. It's this lifelong passion that helped lead me to becoming a pioneer in bionic technology. Right now, I'm the only person on the planet who has a special computer chip implanted in my brain that can read my thoughts and send those signals through a port in my skull out to a computer, which can then send that information back to my body and make my body do stuff.

For the past three years, I've been using this groundbreaking technology, called NeuroLife, to bypass a spinal injury that left me with quadriplegia. Although I'm paralyzed from the chest down, when I'm hooked up to the computer, and the computer is connected to a special sleeve wrapped around my forearm, I can use my hands to pick up and put things down. The technology reanimates my arm and allows me to control it with my mind, similar to the the way I moved before I had my accident.

The accident happened in 2010, during my freshman year at Ohio University in Athens. A few days after my final exams, I headed out to the Outer Banks, North Carolina, for a brief vacation with my girlfriend at the time and some friends. I remember sitting behind the wheel on the nine-hour drive, thinking about all the fun we were going to have and relishing in the fact that we were going to spend a few days just kicking back and letting our hair down. When we finally arrived, we headed straight for the ocean to enjoy the waves.

I was so excited to be there that I was the first person to get into the water, even though it was pretty cold. I dove headfirst into a wave like I had done a million times before. But this time, the waves pushed me down, and the water below wasn't very deep. I hit my head on a sandbar. Immediately, I knew something was wrong because I couldn't get up out of the water. Thankfully, I wasn't by myself. My friends pulled me onto the shore.

At first, I was really optimistic. I thought that I'd be back doing whatever I wanted in about six weeks. I didn't really get a clear diagnosis until the morning after the accident. But when I did, it was pretty bleak. I was a quadriplegic: They said I could move my arms around a little bit, but I wouldn't be able to do much else. They said I would need help with everything, from getting dressed and eating to drinking or turning on the lights. "This is what it's going to be like for the rest of your life," they told me. That really hit home. But I took it as a challenge. I wanted to prove them wrong. I wanted to get as strong as I could and make my life the best that it could be in spite of my injury.

First, I had to relearn every aspect of my life to adapt to my paralysis. I did outpatient therapy with Ohio State University in Columbus because the campus was only 20 minutes from my parent's house. With support from the doctors there, I was able to start doing more for myself than initially expected. After a lot of work, I could eat on my own, I could control a wheelchair, and I could even drive a car.

But I realized that eventually the therapy that was helping me so much would have to end, due to my insurance. So I had to look for other options. I started asking my doctors, "What are some other ways for me to get therapy and continue getting better?" That led me to doing research studies that would enable me to continue therapy without having to rely on support from my insurance. These studies also exposed me to some of the most advanced technological advances in the world today. 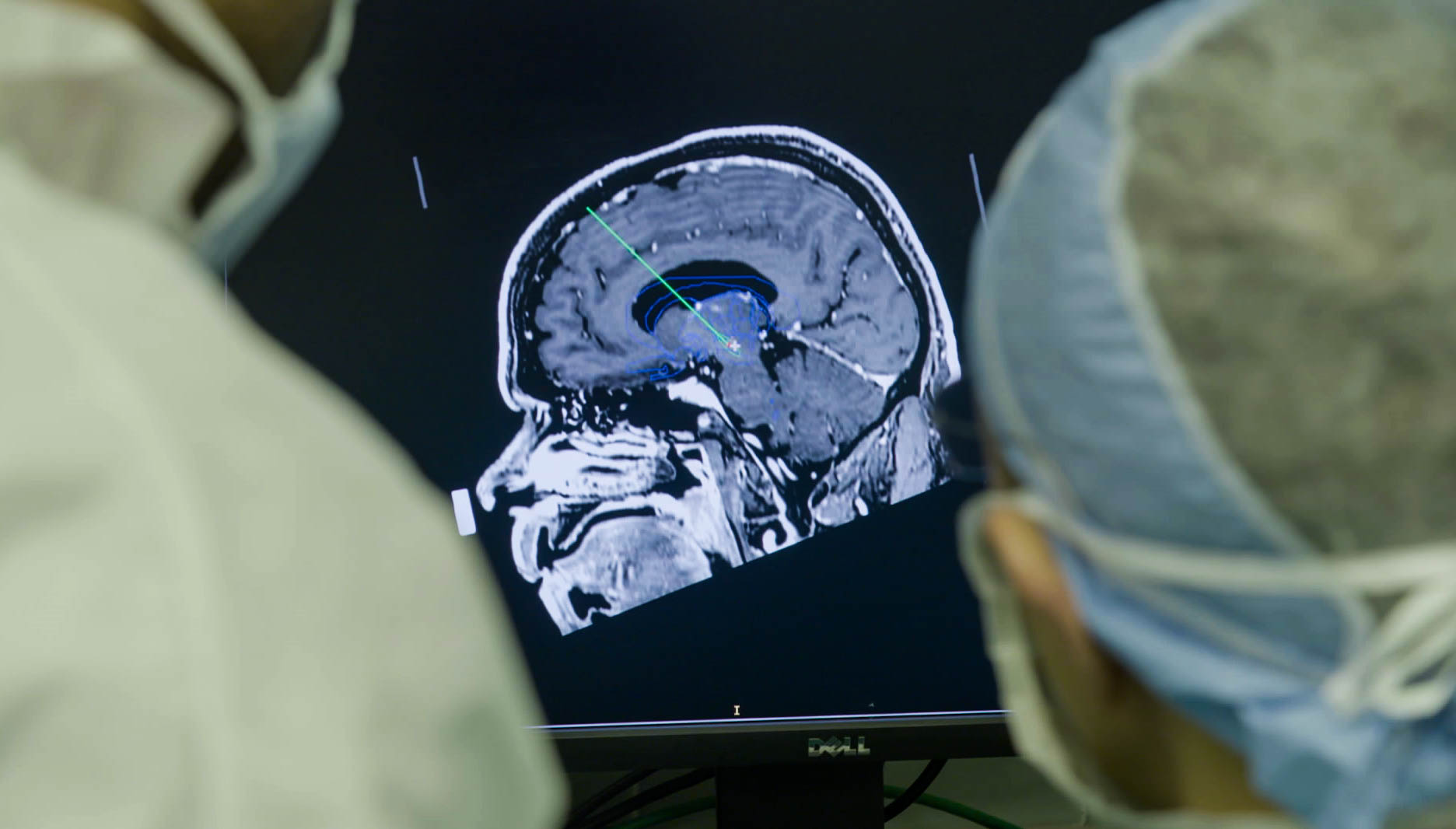 Ohio State University doctors in the midst of a deep-brain implant surgery that is similar to the one Ian went through. Photo by Andrew Cagle

When I started with the NeuroLife research project, the doctors did not tell me the whole story. At first, they told me the study was focused on just using electronic stimulators on my muscles in my forearms. The stimulators were controlled by engineers using computers. I had heard of and even used electric stimulation before in physical therapy. But the system that was created by Battelle Memorial Institute and tested on me at OSU was more advanced than anything I'd seen: It actually allowed the doctors to pick smaller muscle segments they wanted to stimulate, so I could move subtle things like an individual finger, instead of my whole wrist.

Once we were able to see that my muscles could respond to stimulation, they hit me with the "million dollar question." The doctors said the rest of the plan was to take the stimulation system and connect it with a brain implant. With the implant, if I were to think, Open my hand, the computer could stimulate my arm in the right places and make my hand open. I'd be able to control my hand independently with my own mind, despite my injury.

At that point, I was really excited because I thought, OK, I might be able to regain use of my hands again. But the catch was that I'd have to have this sensor surgically implanted into my brain. And then, at the end of the study, I'd have to go through a second surgery to have it removed, because the implant is not designed to function forever. I had to seriously ask myself if this was something practical and reasonable for me to do. The thing that really made up my mind was the fact that I had this once-in-a-lifetime opportunity to help push science and the technology further and possibly help other people out there living with paralysis.

The night before my brain surgery, they had me come into the hospital for some monitoring. I couldn't get any sleep because I was so excited about all the possibilities. I woke up the morning of the procedure and felt like a kid on Christmas. I was sedated during the surgery, so I don't remember much. But the doctors basically cut open my scalp, drilled a hole through my skull, and then placed the electrode on the surface of my brain. After the surgery, they didn't know if I would actually be able to control the system. We had to wait for everything to heal before we could actually plug my brain into the computer.

One of the weird things I had to get used to was having a port sticking out of the top of my head. It's an opening in my skin that goes down through my skull to the top of my brain, so obviously the list of potential problems is really long. Not to mention, it just felt strange. I had a hard time getting to sleep at night and putting on clothes. Just getting comfortable with that extra weight mounted on my head took a bit of time. But now it feels completely normal. 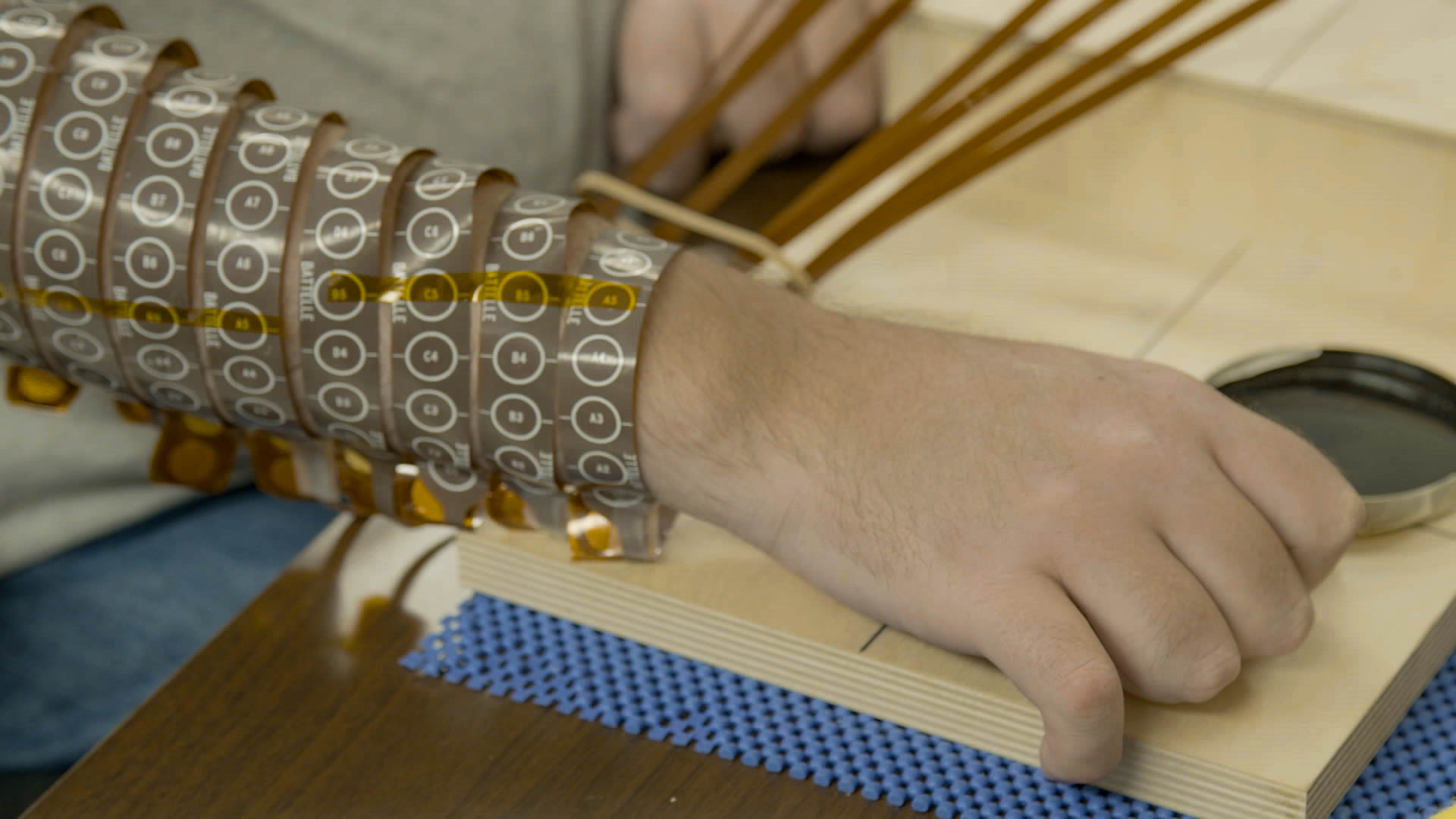 Once everything was settled and healed, we were able to plug the system in. At first, I was just controlling a virtual hand on a computer screen, not my actual hand. This helped me train and prepare for the real thing. The magic moment came when we finally connected my implant to the stimulator, creating the NeuroLife system. It allowed me to think about a movement, and then the computer would send those signals to my hand so that I could actually move. The first time I controlled my hand with my own brain through the system was mind-blowing. It reassured me that all the risk of the brain surgery was worth it and that the technology we were working on was headed in the right direction. It also motivated me to continue to work harder and harder at learning how to control my body with the system.

I've done a lot of cool stuff with this technology like play Guitar Hero. But the best moment so far was the first day I was able to pick up a bottle, pour the remains of that bottle into a smaller dish, and then pick up a stir stick and stir the contents around. It was huge for me because it was so practical, and I could see firsthand how this technology could really change the lives of paralyzed people. Unfortunately, this technology is still very much in the experimental stage. Although I'd love to have the functionality it provides in my home and everywhere else, I can only hook up to the system in a lab at OSU.

Right now, some of the biggest hurdles this technology faces before being ready for the masses are size, reliability, and convenience. One thing that could shift all of these would be to make the entire system wireless, so you could have a sensor in your brain talking to stimulators placed all over your body—not just your hands, but also your legs and feet.

I see this technology as something that you could use in your everyday life. If you do have a spinal cord injury, with this technology, you wouldn't have to rely on other people to do everything. You could live a more independent life. What we're working on with OSU and Battelle even has the potential to change the lives of people without disabilities. It could go beyond simply restoring functionality but also offering humans abilities they've never had. It's incredible to think that by being part of these studies, I've been on the cutting edge of all of these futuristic possibilities, and I can't wait to see what is yet to come.

As told to Wilbert L. Cooper