I've always hated life-hack listicles. And by that, I mean I once read one in 2012, and I didn't like it. But once you've read one, you've read them all: the same ancient photos of some phone chargers slotted into a paperclip, rehashed when it's been a low-yielding week on the content farm.

Mind you, I could probably benefit from paying some attention. With my lack of storage, my lack of most common household appliances, and my lack of any products to help me stay on top of my multiple loose phone chargers—I recognize these issues but don't have the time, imagination, or money to do anything about them.

So maybe—just maybe—following the life hackers' advice could be the answer I've been looking for all along?

1) No Idea How to Deal with Your Storage
Issues? The Answer Is Right Under You, Dummy!

I live in a garden shed. This has its upsides—relatively good talking point, the fact I'm the only person who lives in it—but also its downsides. It is tiny, and there's nowhere to put any of my stuff. 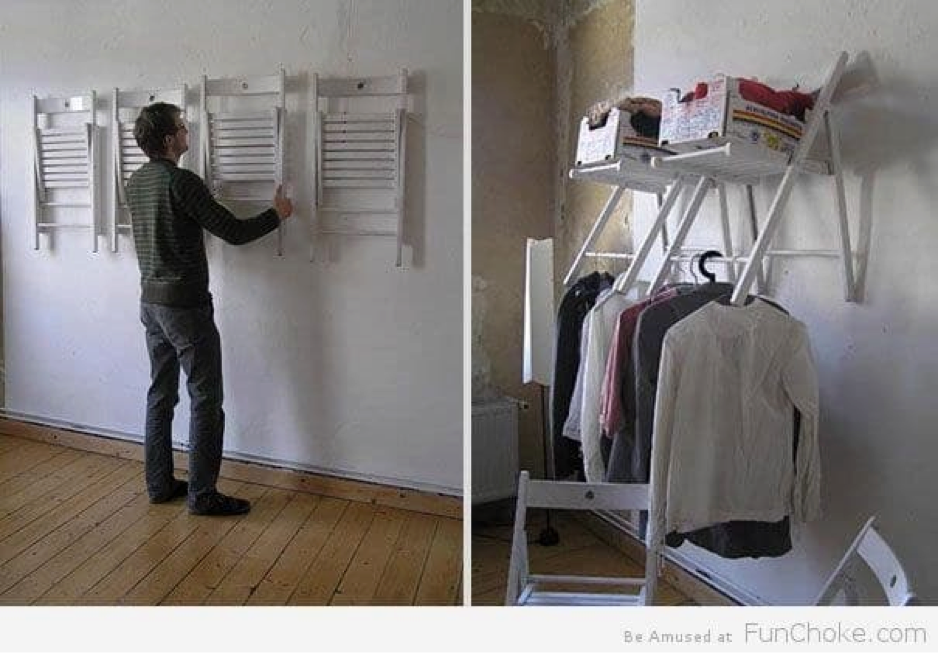 Luckily, the life hackers have a solution: Drill a chair into a wall and hang your valuables off it. 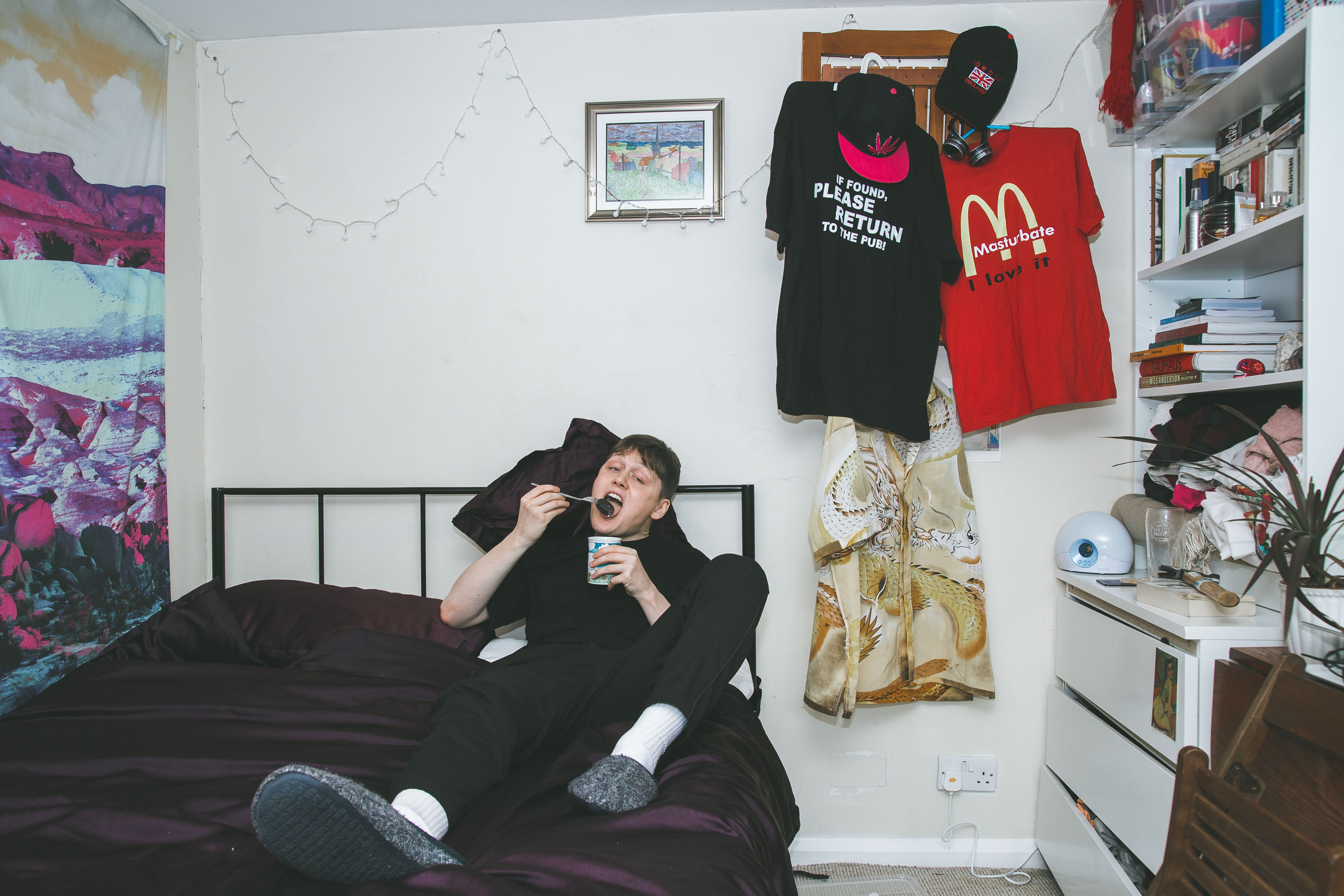 OK, so there's no shelf space like in the original photo, but at least I have something on which to hang my scarves, hats, shirts, and other light items. And, yes, I now have nowhere to sit in my own home, and this precarious arrangement can't really handle much weight, and the whole exercise was basically redundant, but I guess novice life hackers like myself have to expect a few casualties along the way.

2) Need a Crisp Shirt, but Don't Have an Iron Around? Steam, Idiot!

I do have an iron, but I hate ironing. And I'd sure like a life in which I can look sharp without singed knuckles. So I thought I'd try this: 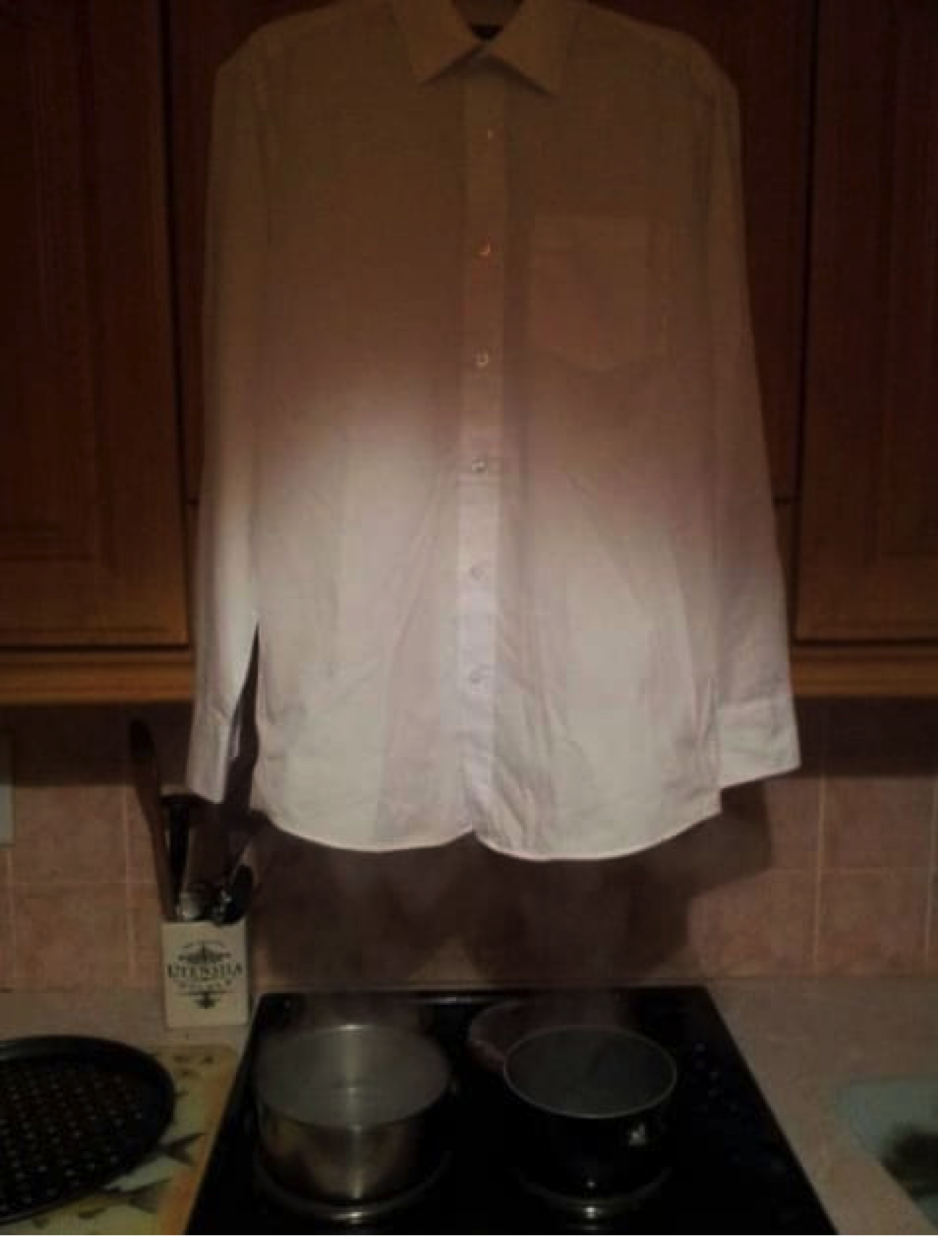 Hammer out. Pans on. The answers were right in front of me all along! 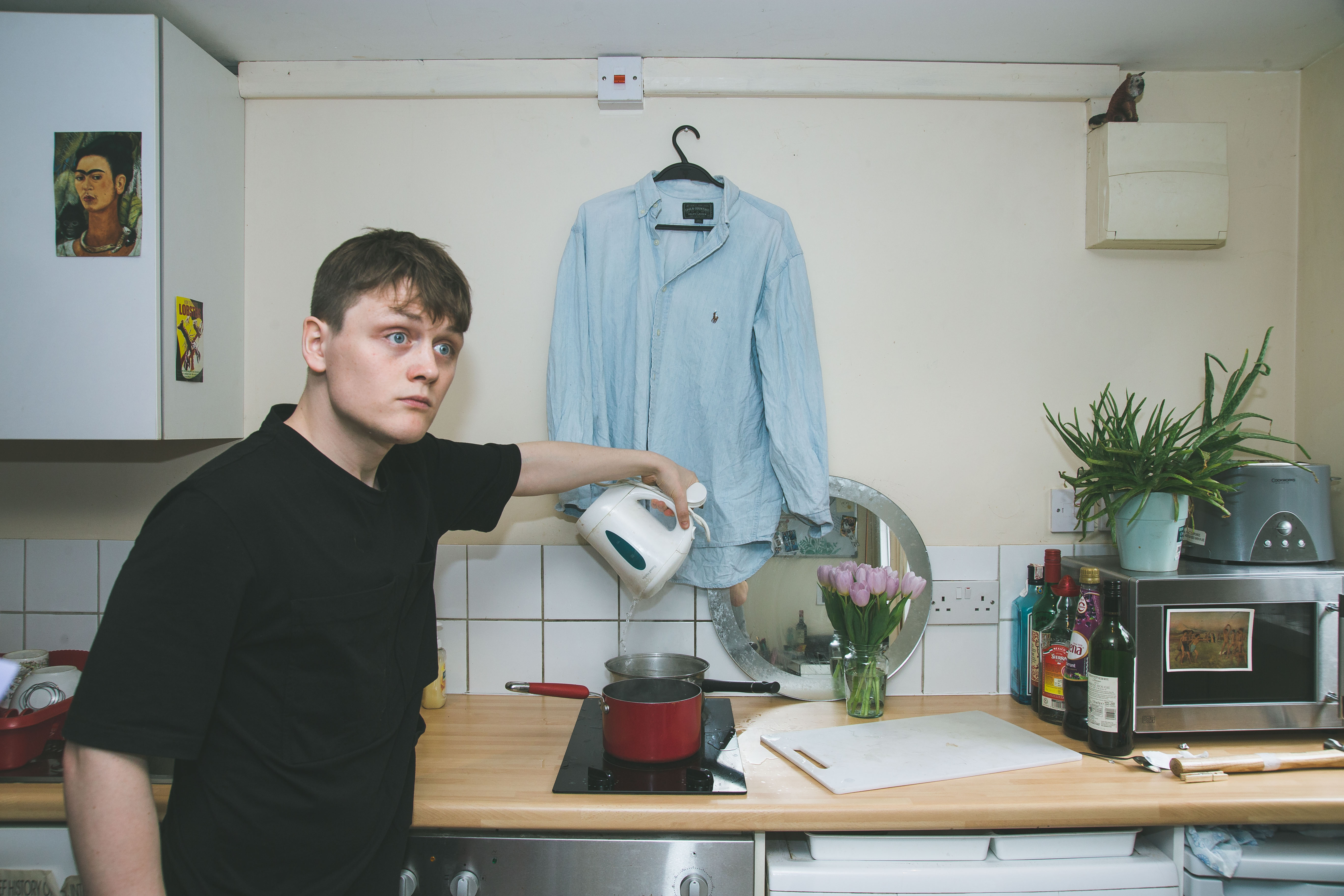 That said, after ten minutes of bubbling, this method doesn't seem to be having much impact. Feeling my shirt—which is the consistency of the inner sole of a soggy shoe on a rainy day—I decide it probably just needs a little longer, like a stew. So I leave it to steam and move on.

I often find myself screaming at my jars. Why? Because they are unlabeled, and I have no idea what's in them, and the masking tape I bought four years ago for that purpose has since lost its stick. 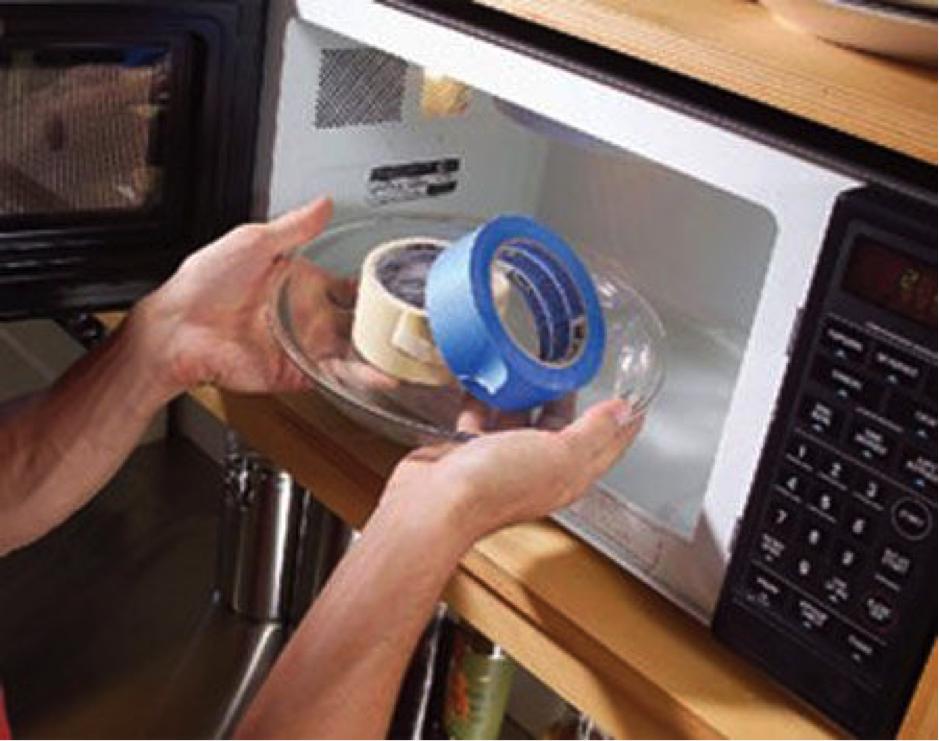 Again, the life hackers apparently have a cure: Microwave the roll of tape. While researching this article, I've come to realize that roughly 66 percent of life hacks basically consist of microwaving inedible household items, so I'm skeptical about this one. 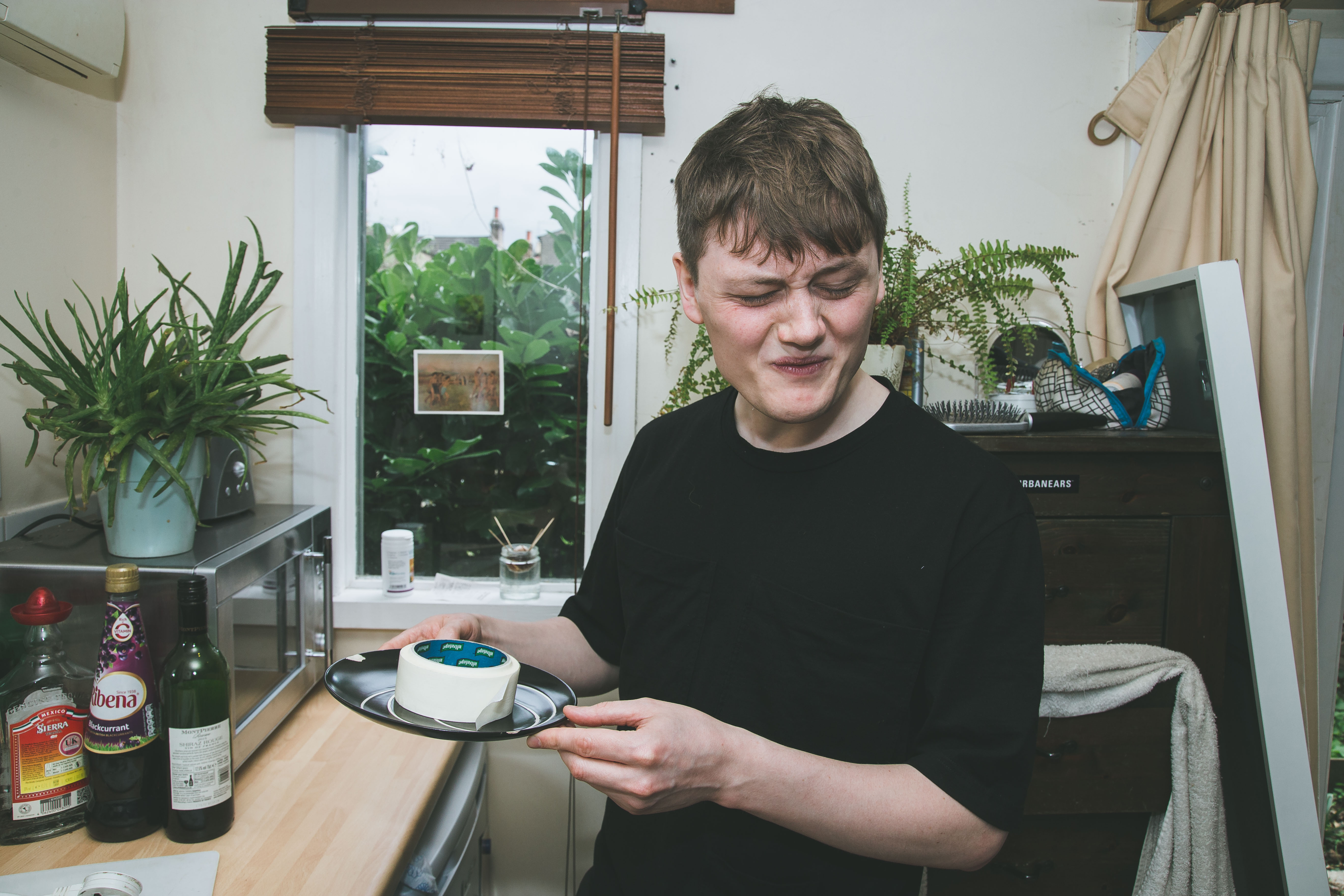 I pick the plate up, and the tape creaks. Like Jesus poking his head out of the cave, it has risen. Though it may have damaged my microwave in a way that will slowly and discreetly poison me, it did work. Thanks, hackers!

4) Sick of Stuffy Bike Rides in the Summer? Soak It Up, Dum Dum!

It's lunchtime, the sun is out, and I've got errands to run. Sounds pleasant, right? Well, not for me. I have the complexion of a button mushroom and live in south London, which means bike riding is a necessity. So today means a stuffy bike ride, with my shoes sure to be soaked through with sweat by the end of the day. That is, unless German engineering can come to the rescue. 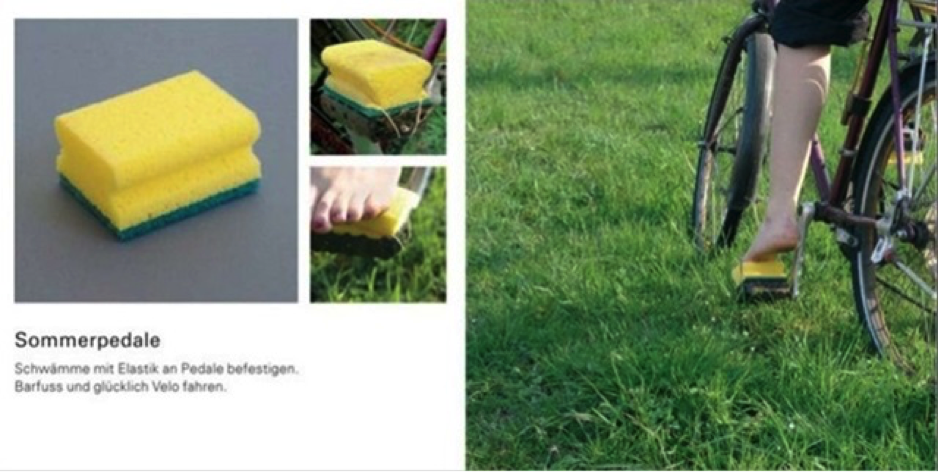 Sommerpedale! Simply grab some sponges from under the sink, string them from your toolbox, and make yourself some… spandles? 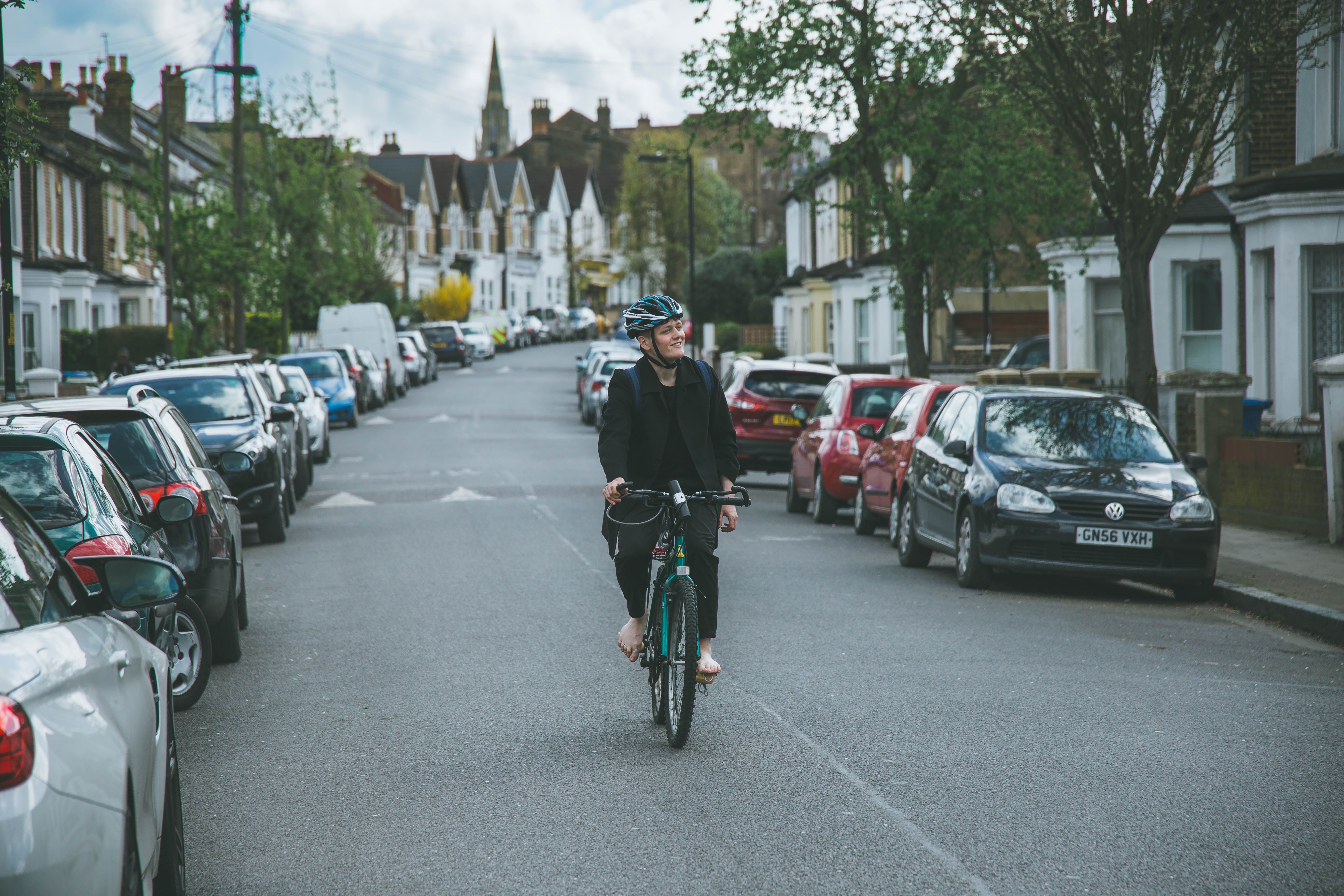 Despite my soles being turning red from residual passata, with the sun shining and a cool breeze running between my toes, I feel good. Refreshed, I begin to wonder: Why don't we ride like this all year round?

Heading to the ATM, I'm still giddy. What a revelation! But getting off my bike, I realize I've made a fatal mistake. Caught up in the wind of refreshed feet, I've left my shoes at home. But never fear: The life hackers, as ever, have a solution. Try "Caribbean queuing," leaving your shoes—or, in my case, sponges—in your place while you have a little rest. 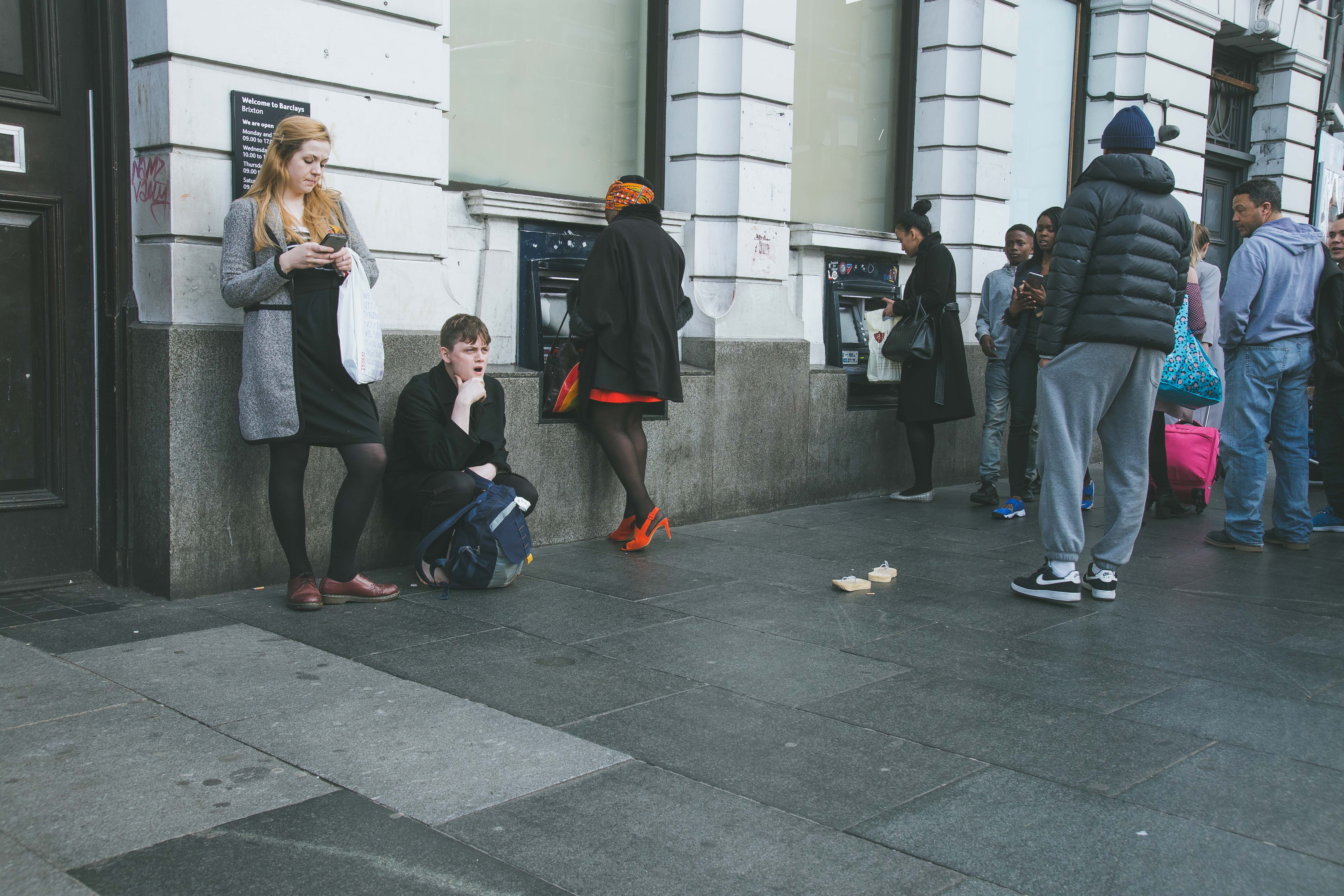 Sitting against the wall, I watch a young man jump in front of me in line. 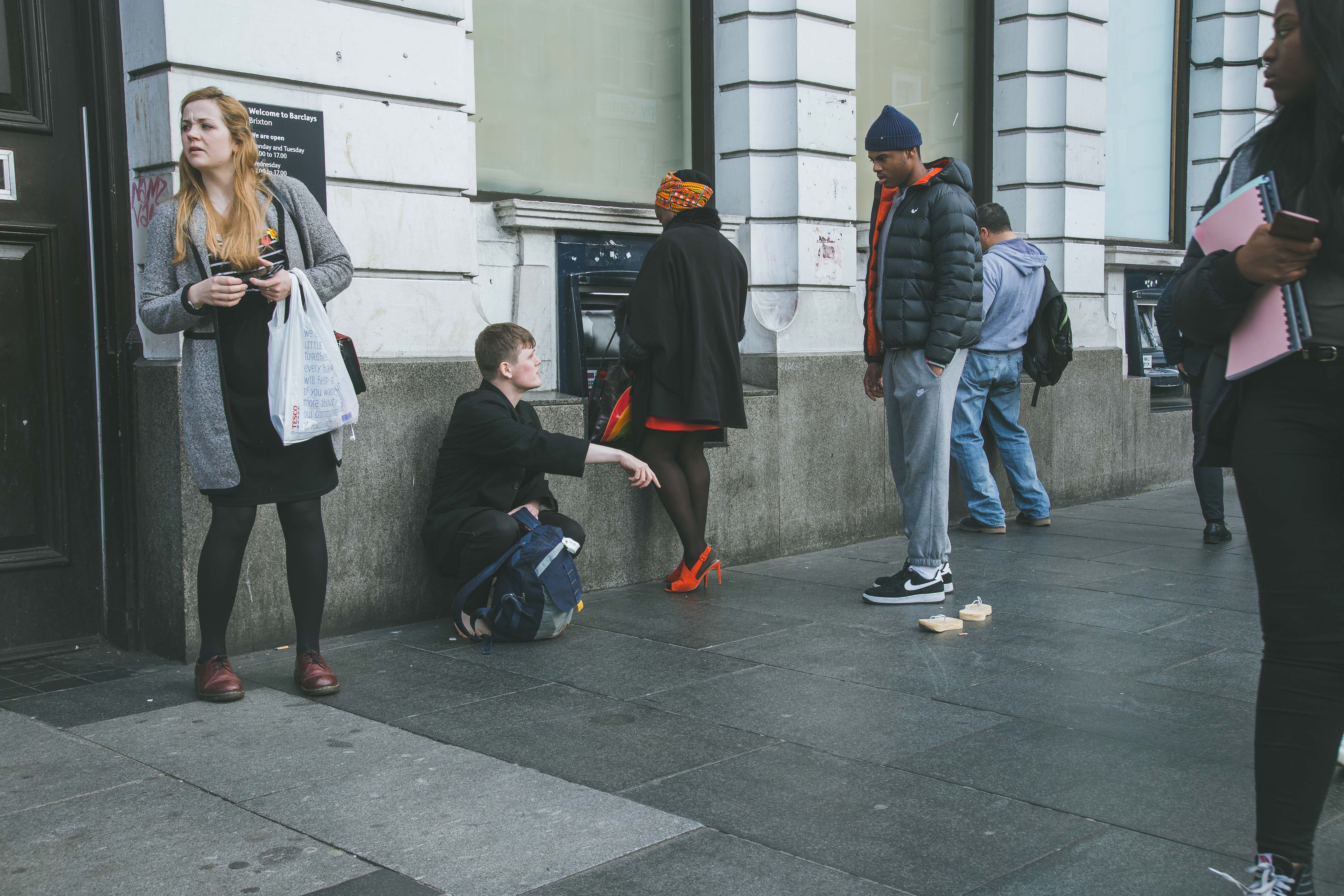 "I'm in line, look." I point, and we both stare down at the spandles. He looks back at me. Then he looks out at the world, dumbfounded. 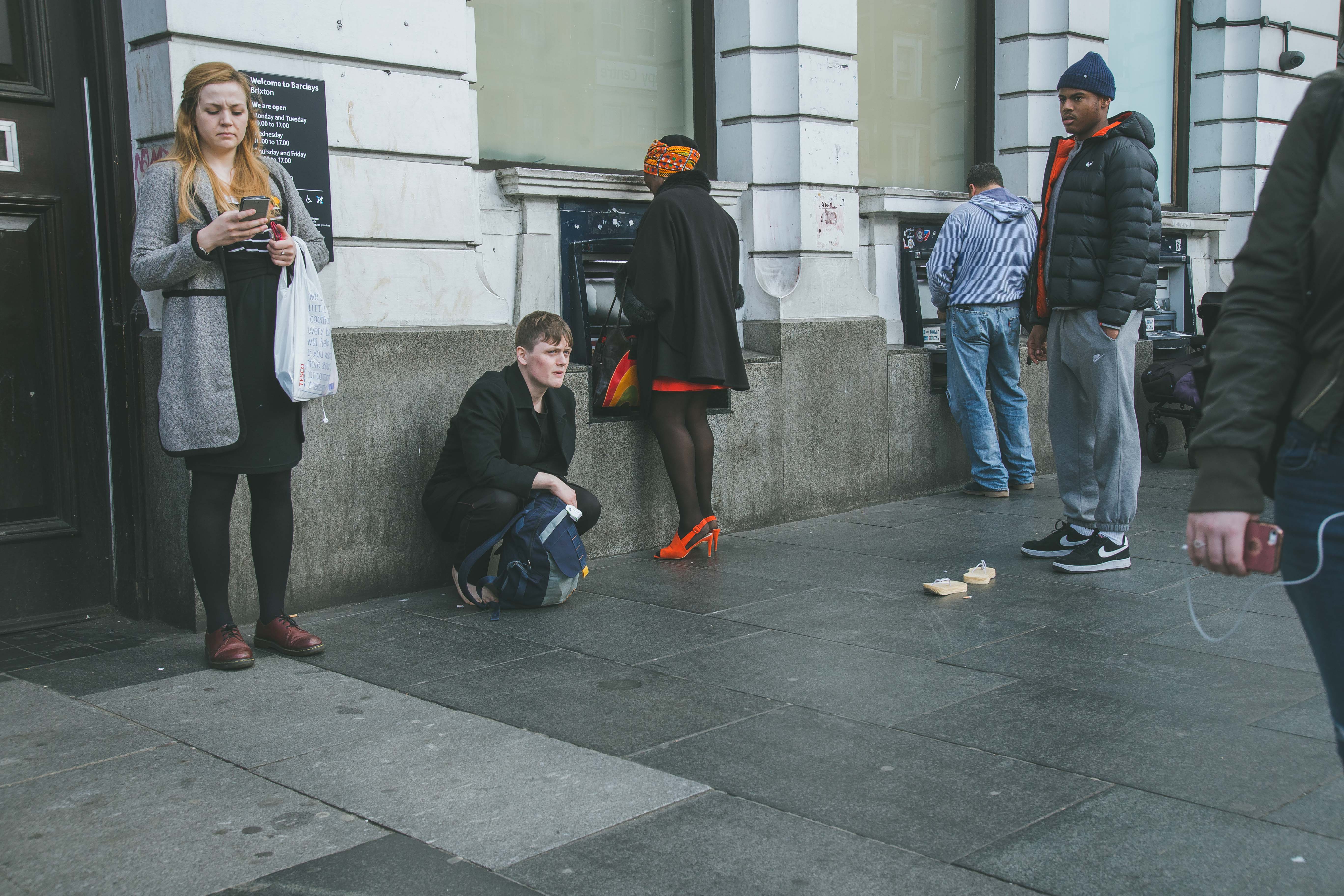 Dear God: It's worked. A man is standing in line behind a pair of sponges. A man is giving sponges with strings attached to them equivalent value as a human being standing in line. Picking up the sponges and leaving, I'm speechless. This is the biggest line revelation since Curb taught us the concept of the "chat and cut."

Last week, I purchased some top-shelf, free-range eggs from my local supermarket. I got home and discovered two of them were de-yolked. I was heartbroken. It can never happen again. Good news, then, that the internet had a tip for me: 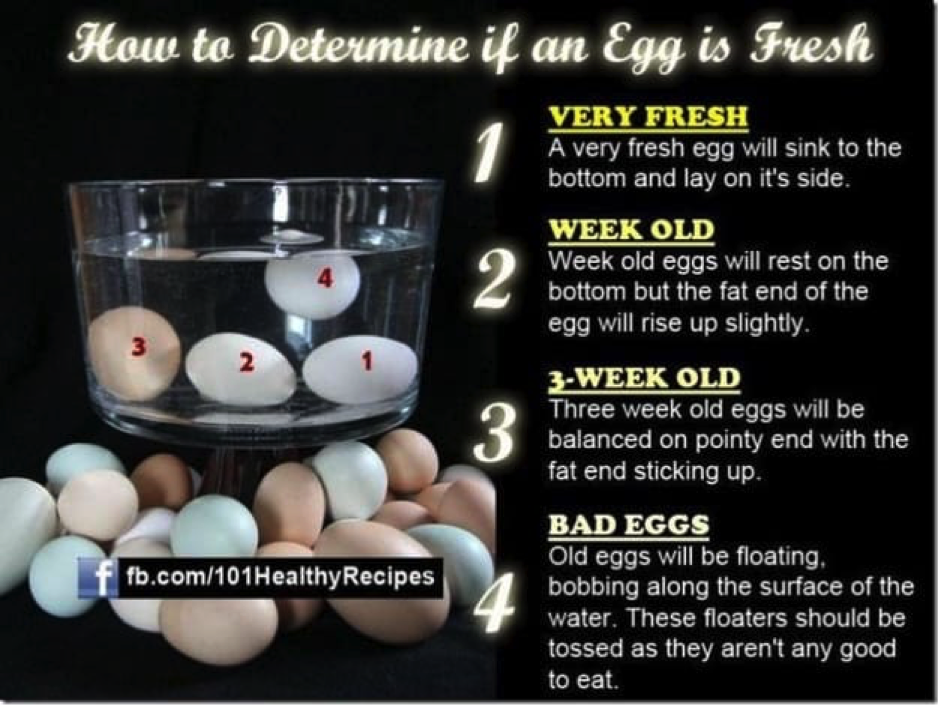 With a Tupperware box under my arm, I make my way over to that very same supermarket and head straight to the egg section. 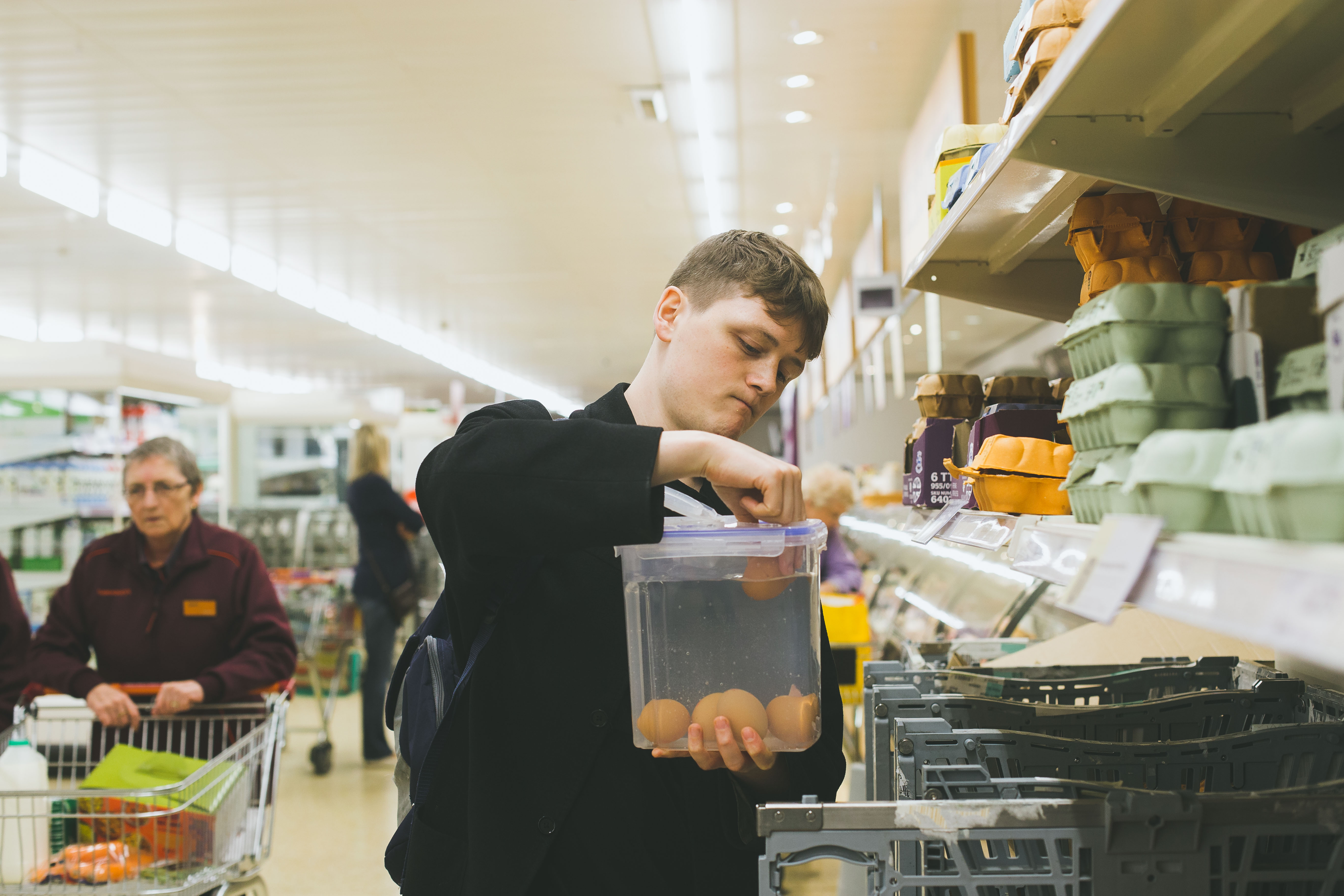 One by one, they sink to the bottom. Everything looks good, so I head to the checkout. Draining my bounty outside, people glare at me, but it's a small price to pay for a perfect set of eggs.

On a high from the spandles and eggs, I decide I'm going to celebrate by going out tonight, so I head back to my place to get ready. 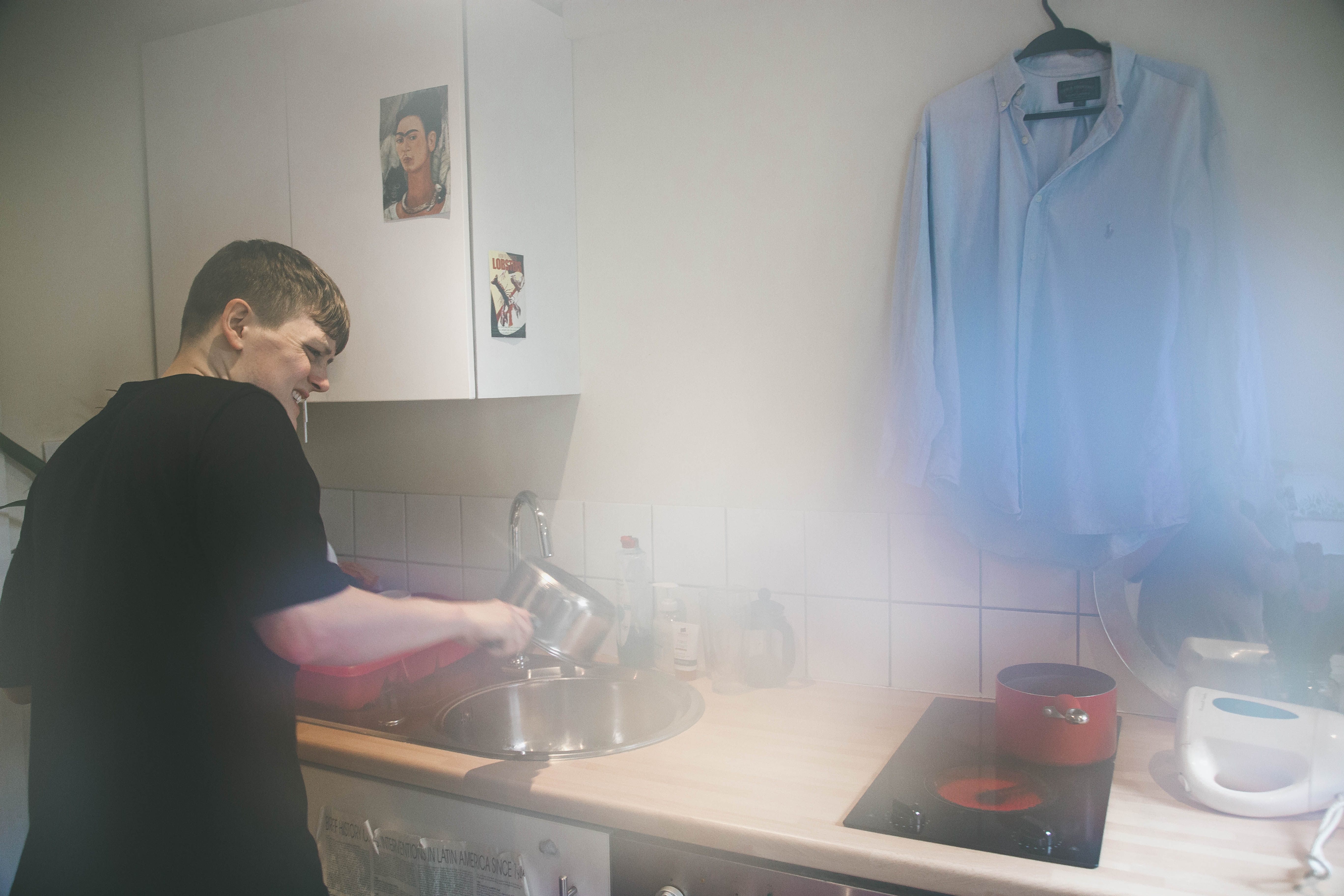 Hopping off my bike, I bound through the shed door. My smoke alarm sounds, pans clatter, and a wave of heat sears my eyes shut. It's like entering an 18th-century needle mill. Swatting away the condensation, I remember my shirt: It has literally been cooking for two and a half hours. And it's still completely creased. This damp shirt, I decide, is not going to dampen my mood. Not today. I'm going to enjoy the cool evening with a small campfire in the garden outside my shed—but another problem strikes: I have no firewood. 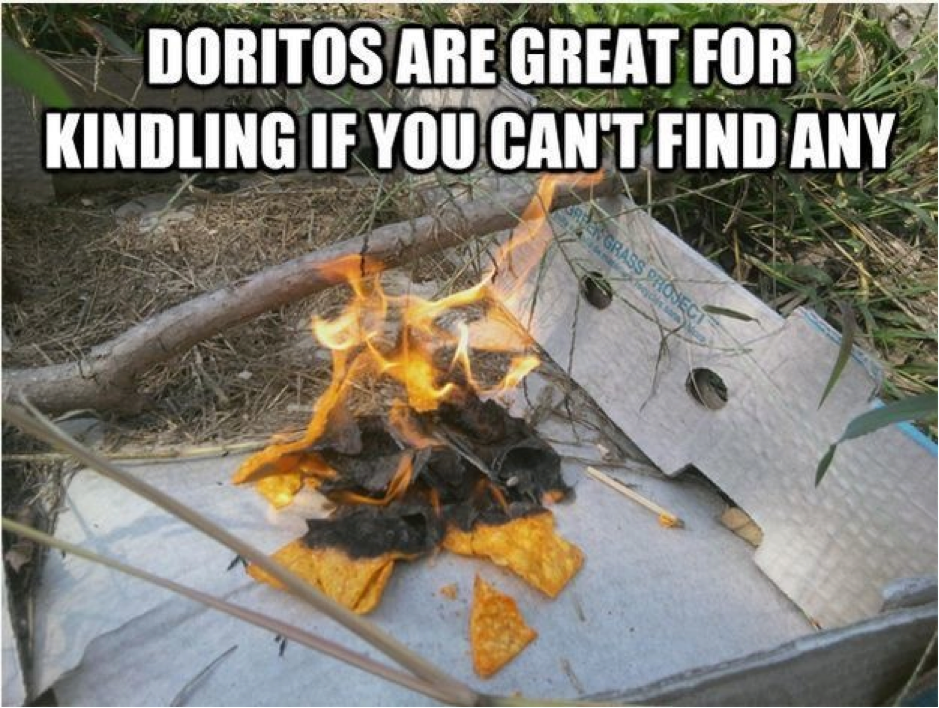 When you're grabbing Doritos to put on a fire, is it a necessity to buy the Chili Heatwave flavor? Or can I just get straight-up Cool Ranch Original? Logic suggests the former, but I prefer the taste and aroma of the latter. Either way, I go for Tangy Cheese. Not for its steady 4-4-2 deal but because its bland flavor has disappointed so many that it deserves to burn. 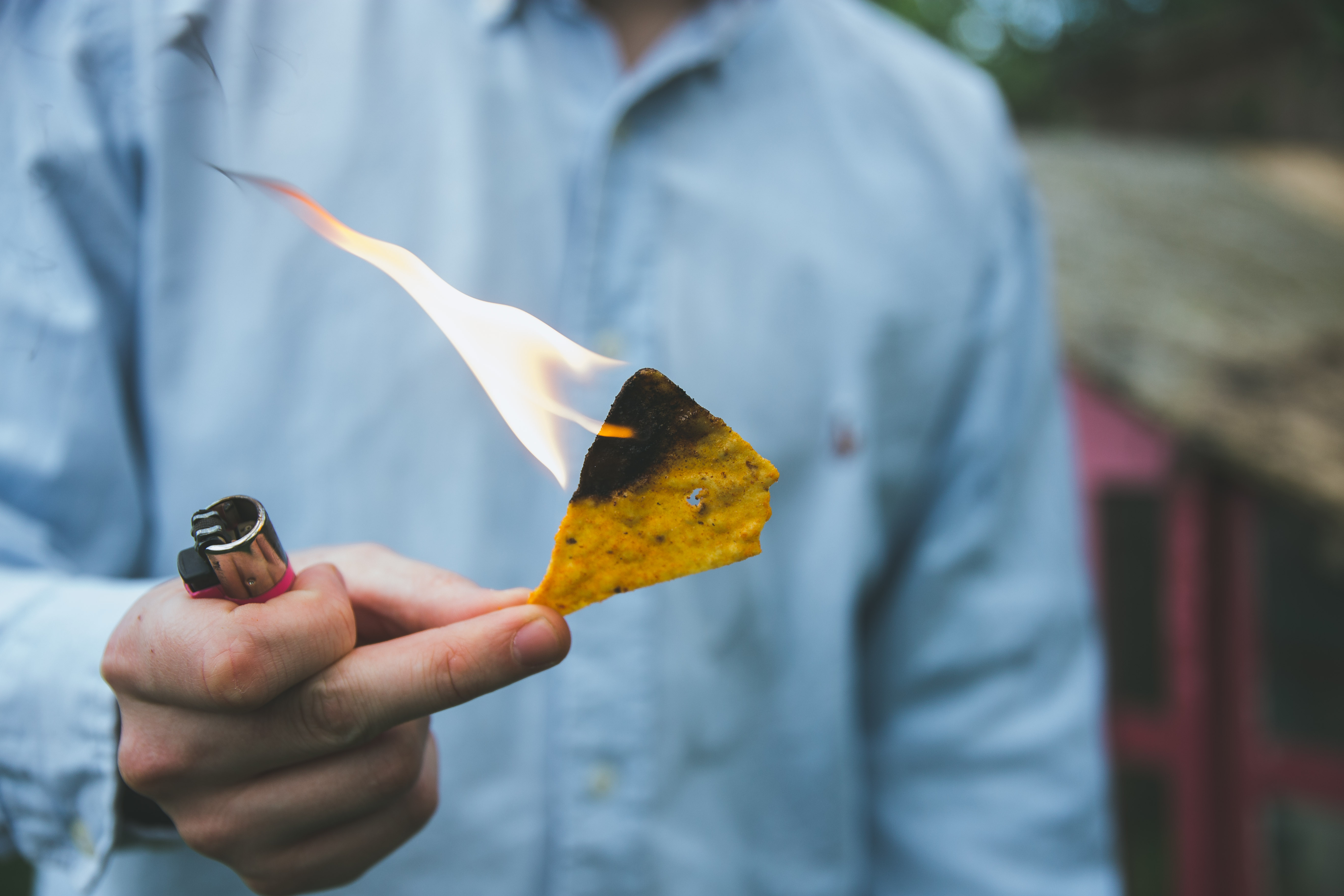 And up it goes. 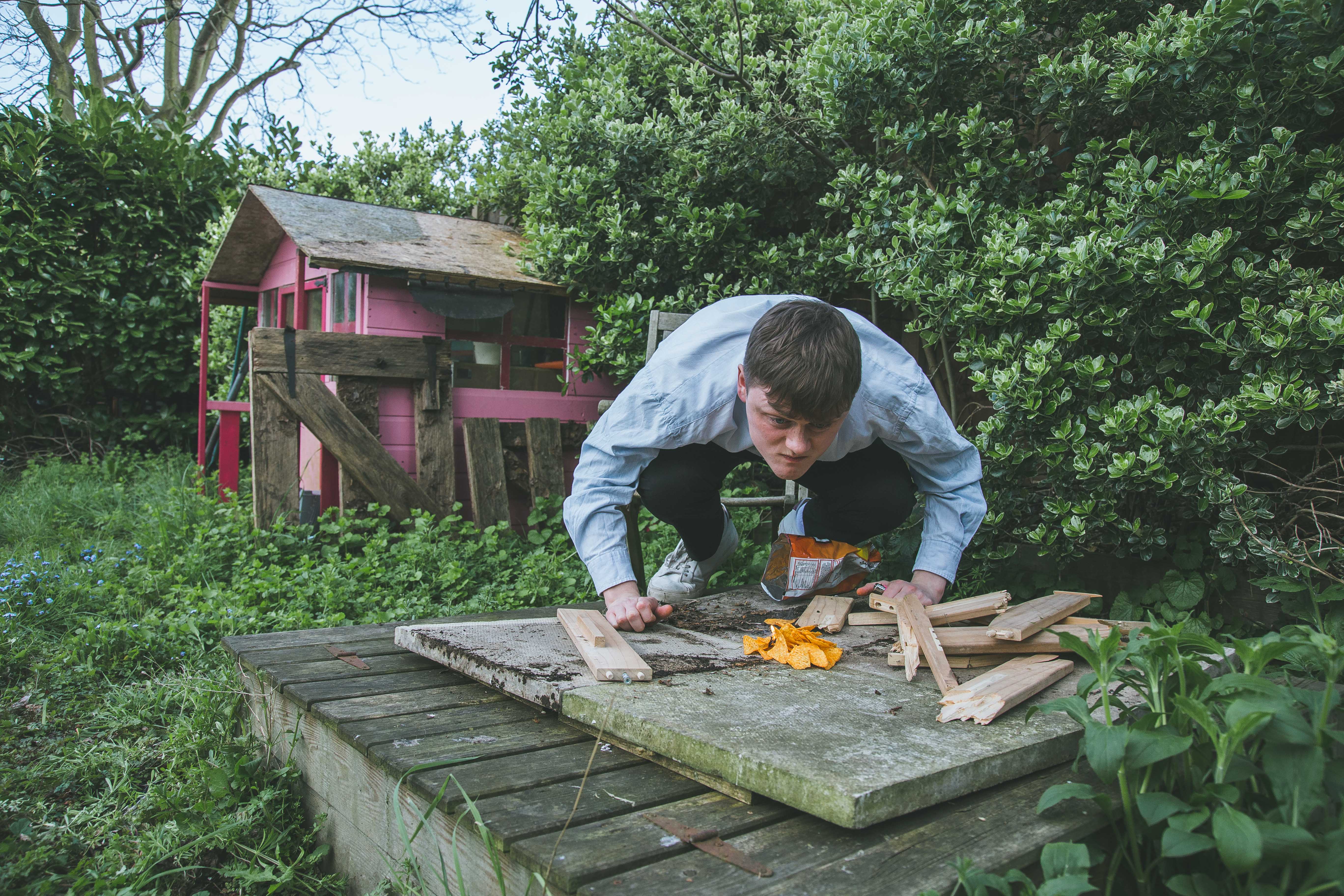 It's sensational, this hack—the easiest fire I've ever built. You know what this evening needs now?

8) Never Bother with a Corkscrew Again, You Absolute Fool! 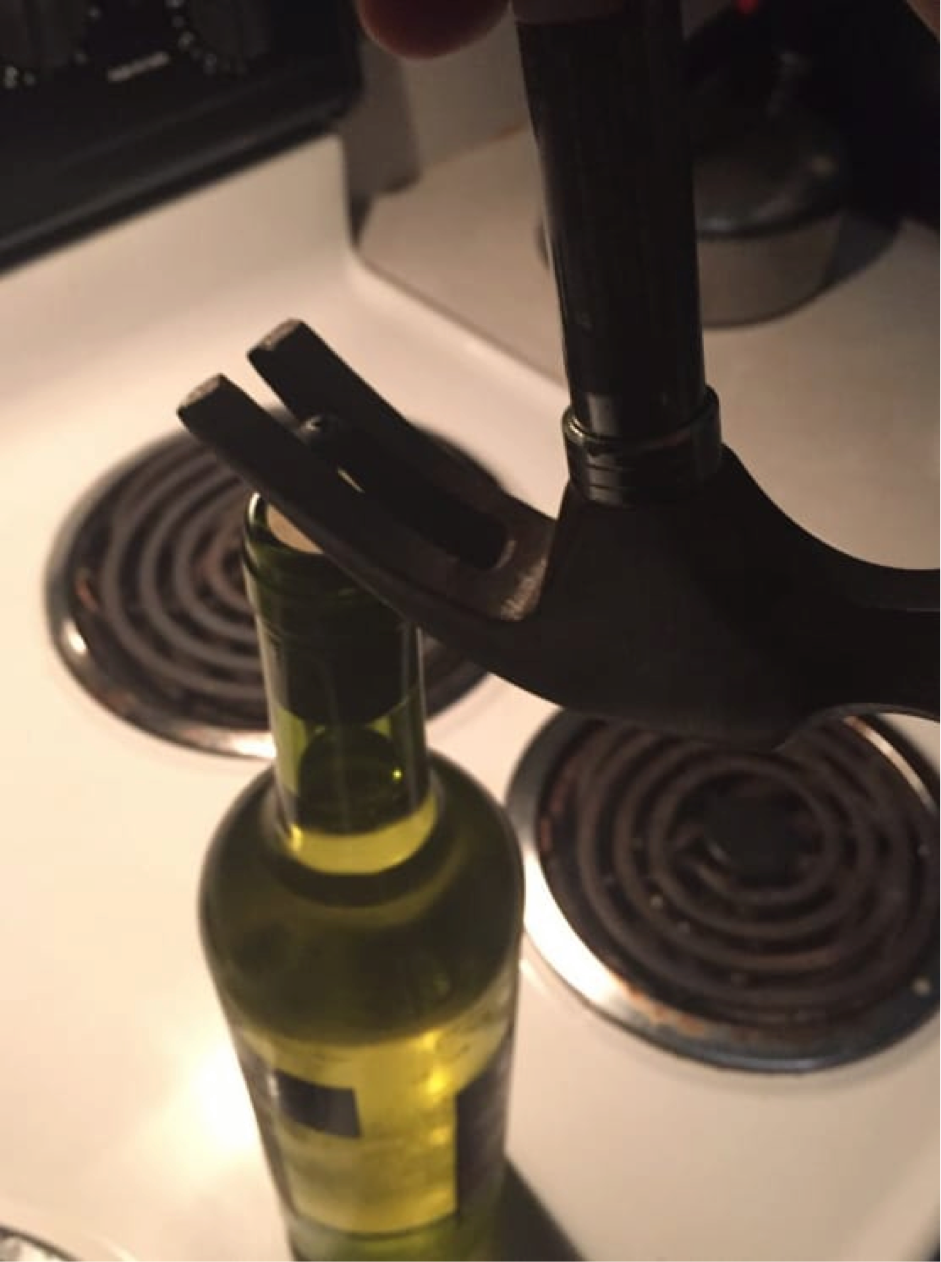 Though—like most humans—I own a corkscrew, by the looks of the internet, opening a bottle of wine is something people seem to love to hack. And this way looks the most assured. So I get my hammer—something I'm beginning to realize is all you really need in your home—and a screw and bottle. 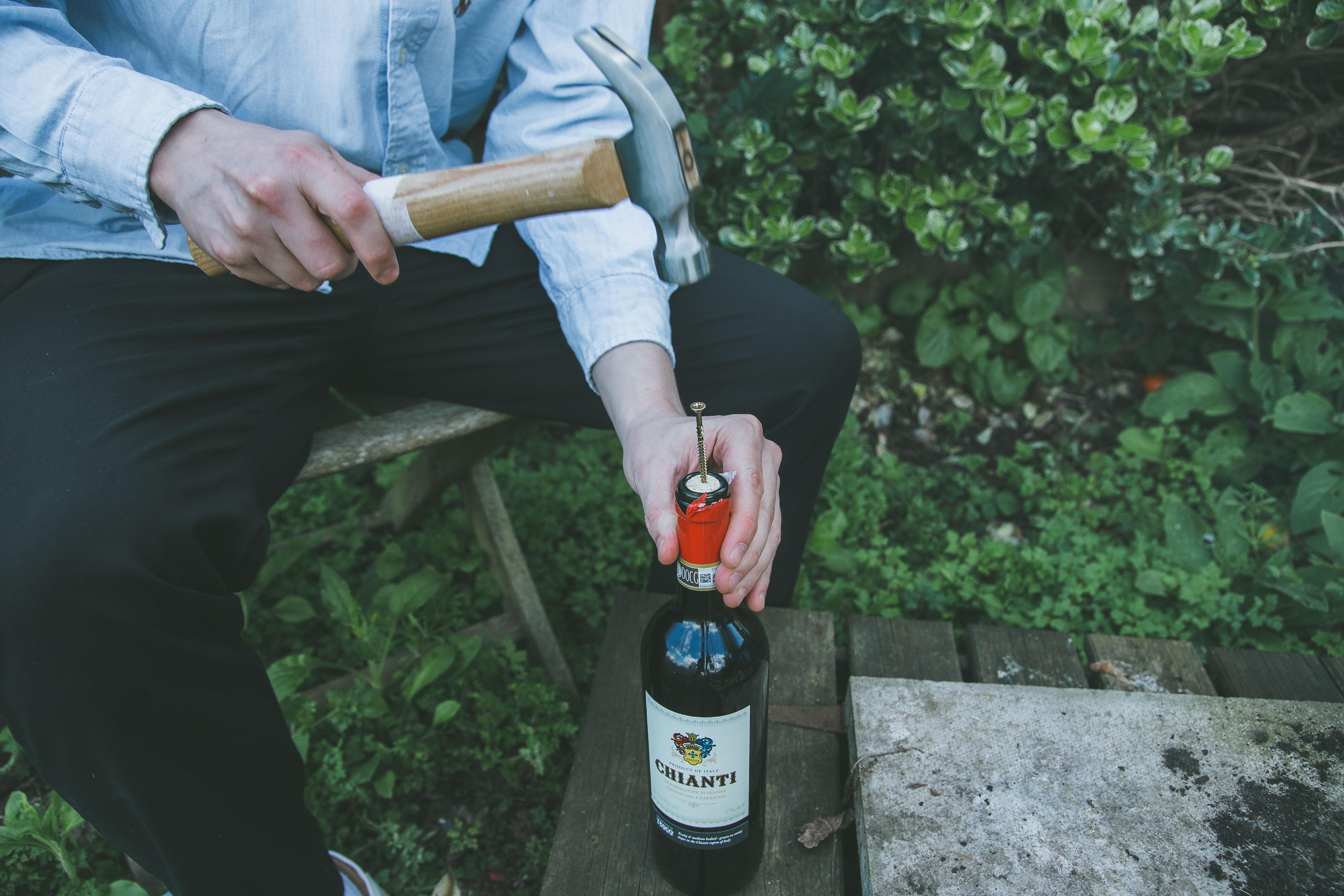 I hammer it down and start pulling. It's tough, but I'm getting there. Eventually, a wriggle, an explosion, and then… boom. 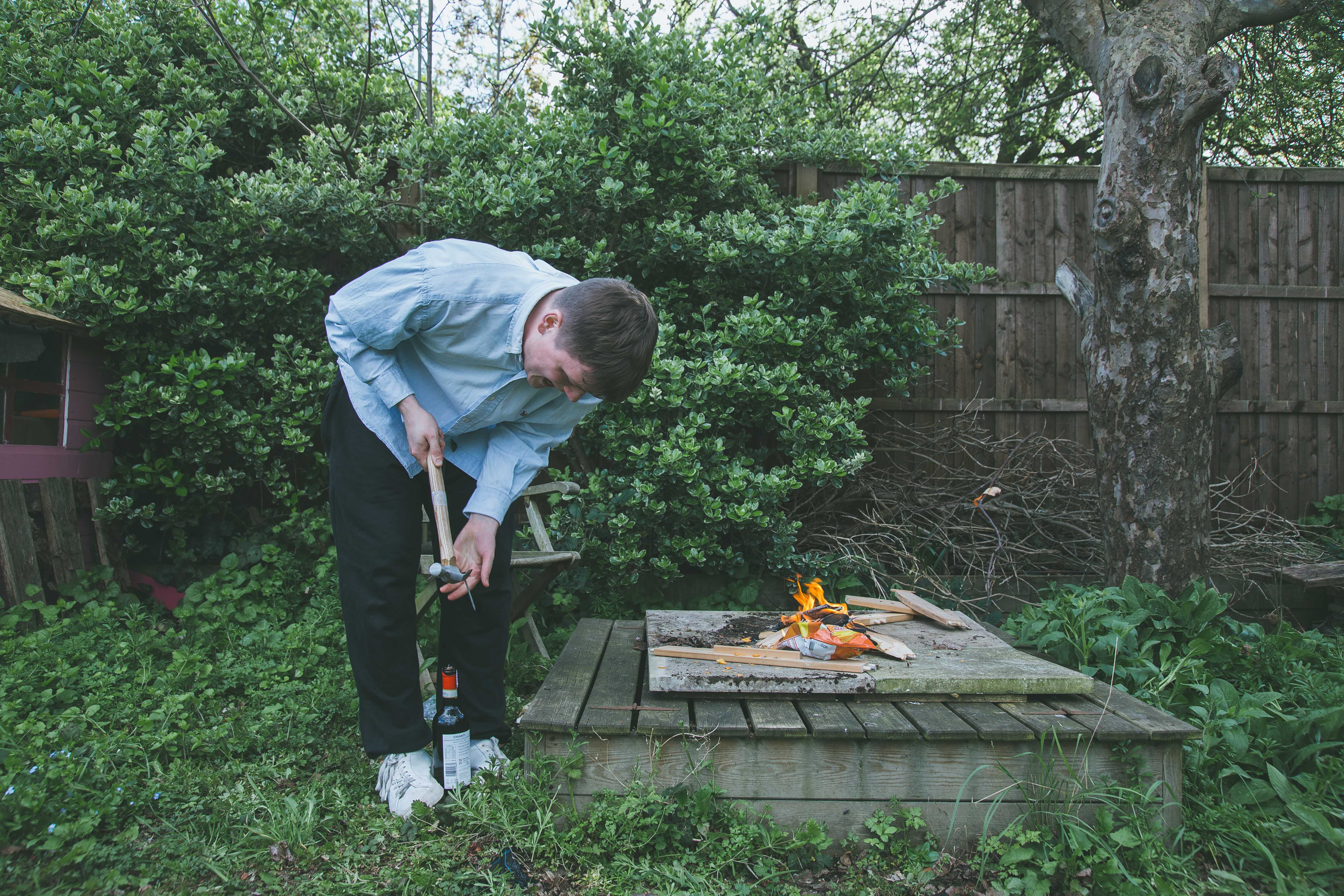 The cork has split. So I hammer it in and try again. The same thing happens. Ten, 20, 30 minutes pass. My face slowly becomes more reddened by the excruciating Dorito heat. I try again, only for another excruciating failure. Tossing the hammer to the floor, I give up. All hope seems lost. And then I hear it.

One of the builders next door—one of the very men I've been tweeting passive aggressively about for the past month—spots me in my hour of need and calls out: "The screw needs to go deeper." Of course! 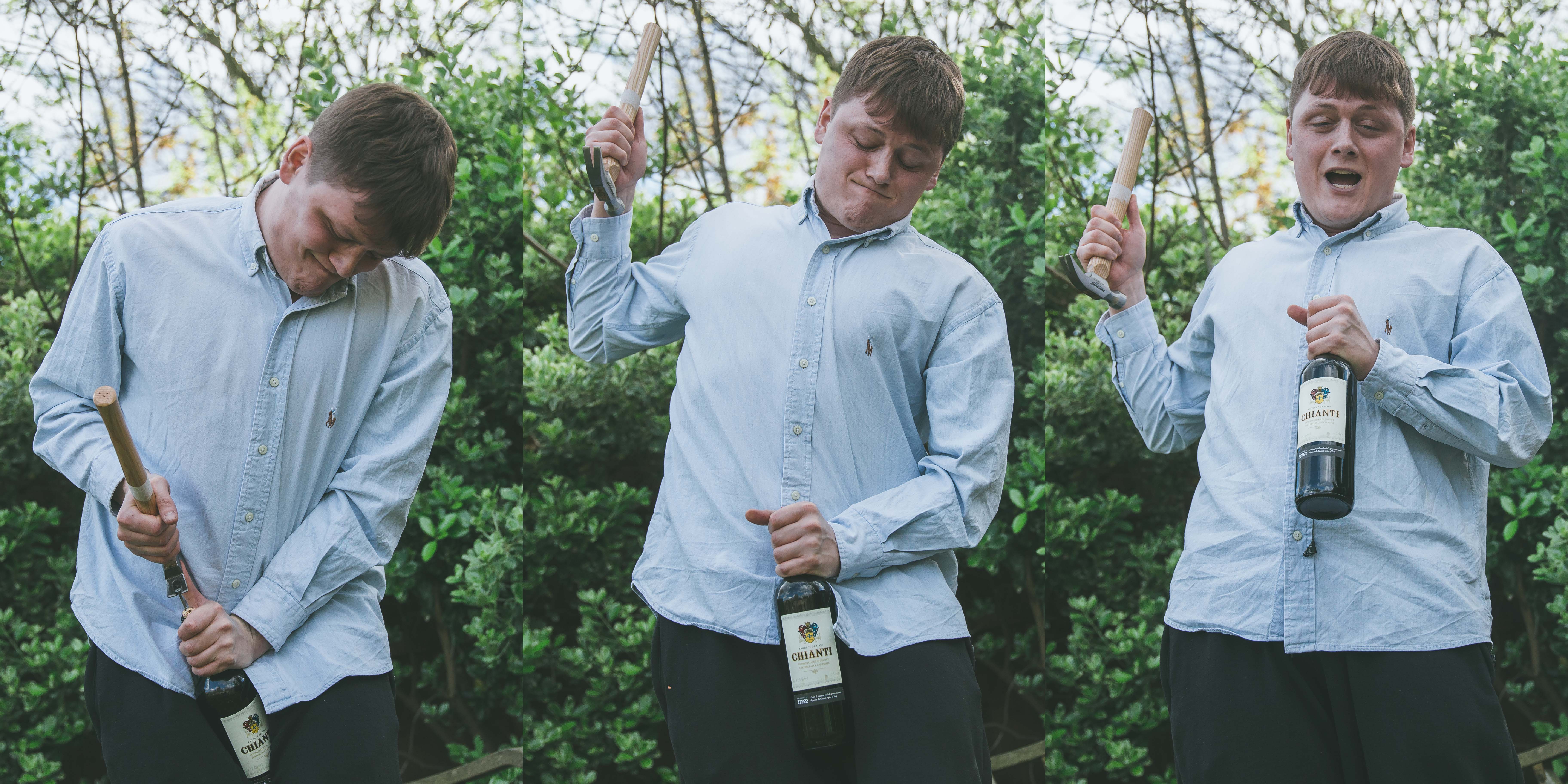 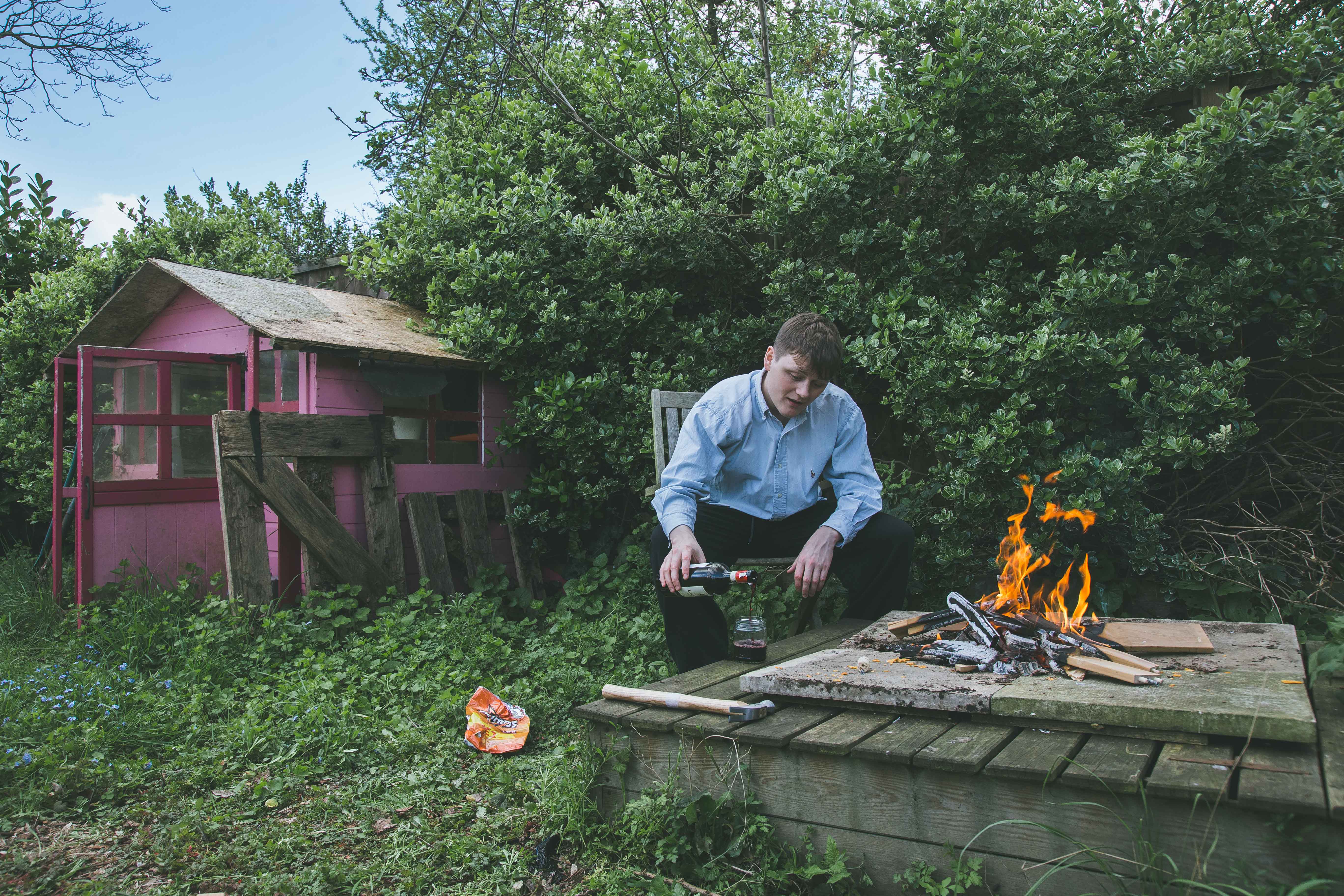 Glory. It may have taken 40 minutes and required the help of another man, but I got there in the end.

Time to get hammered. 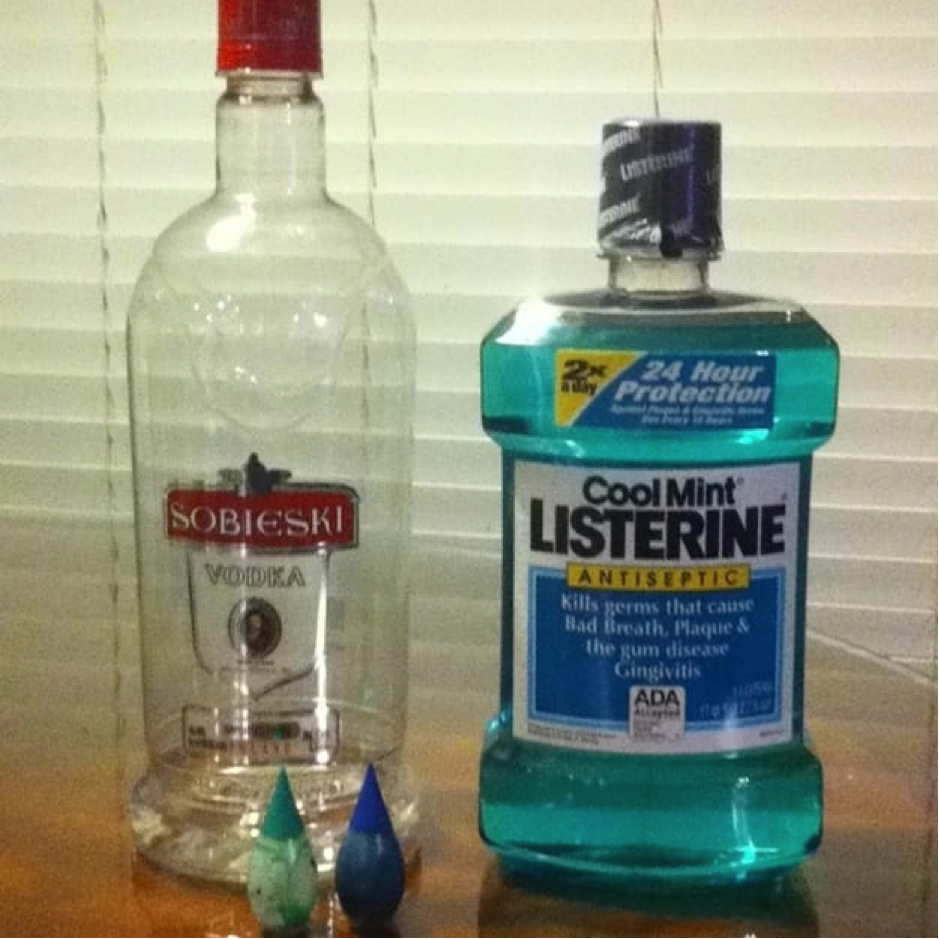 I'm the kind of guy to order an Uber from the pub to Domino's after four $6 pints on a Wednesday night, so any saving tips are welcome, and this one makes complete sense to me. 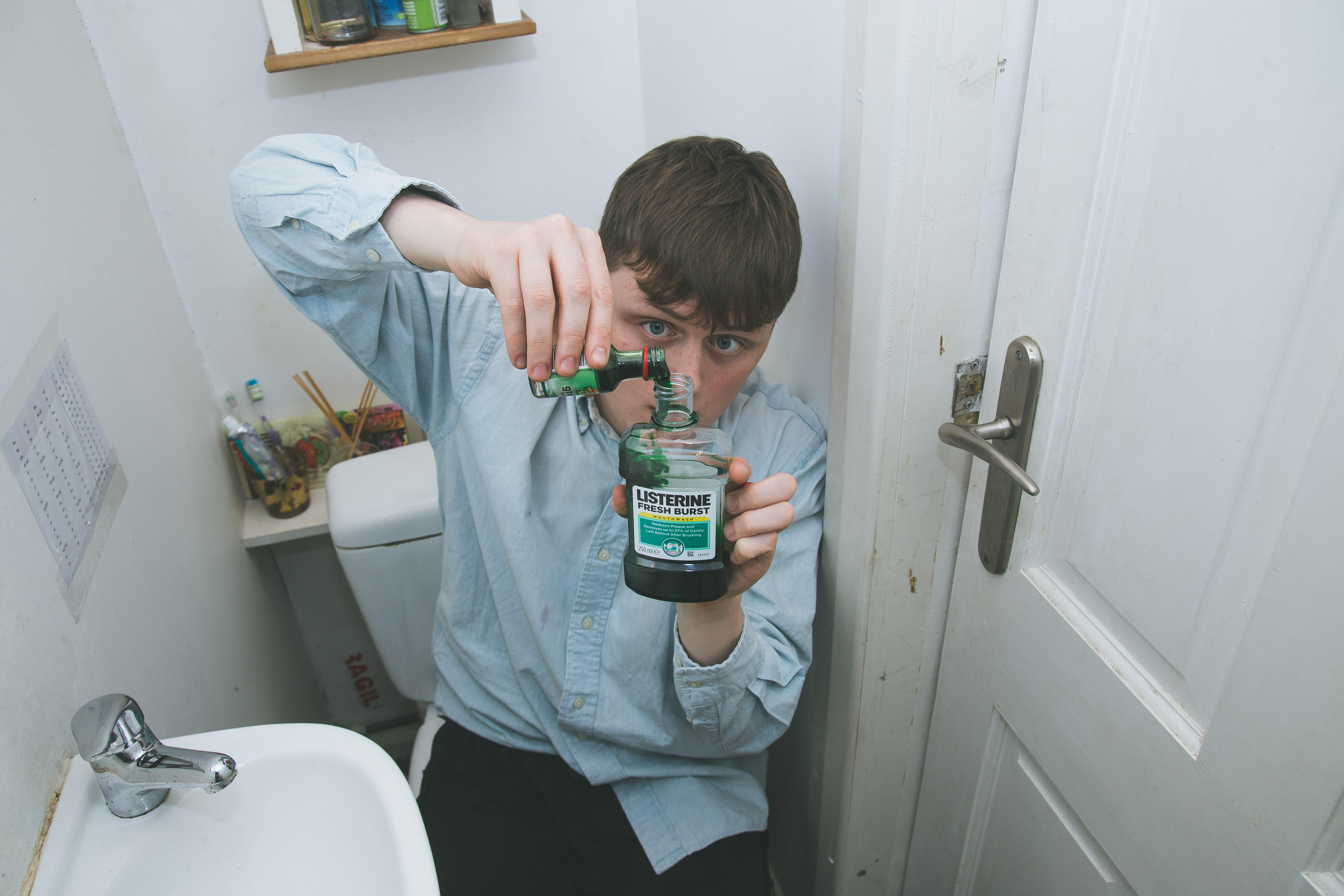 Packing my bag, I head out into Brixton. And dare I say it, reader, but considering my successful bag search and entry, this seems to be another one that works. 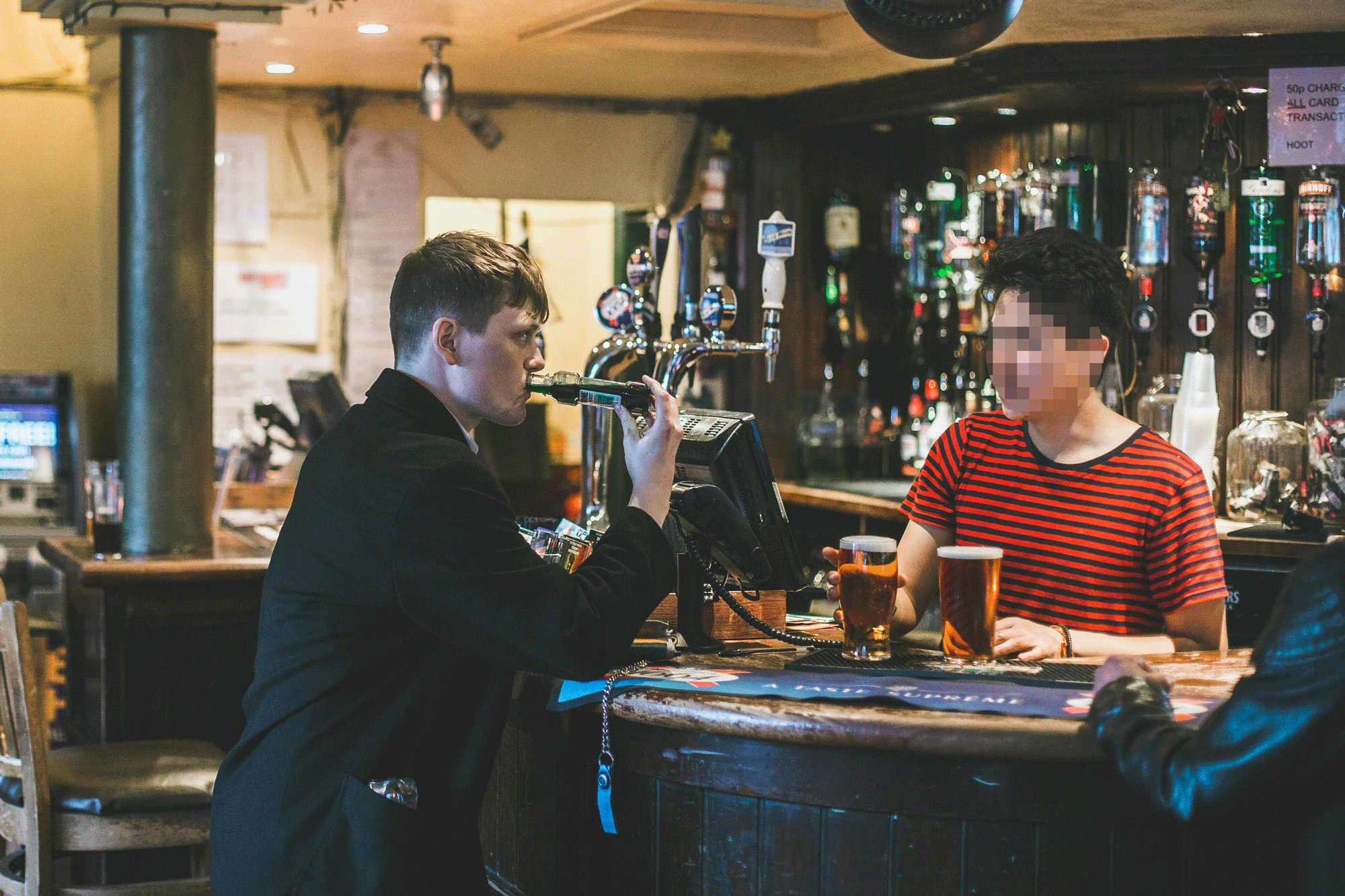 I'm standing in the middle of bar that once refused me entry because I had a soccer scarf in my bag, swigging tequila. 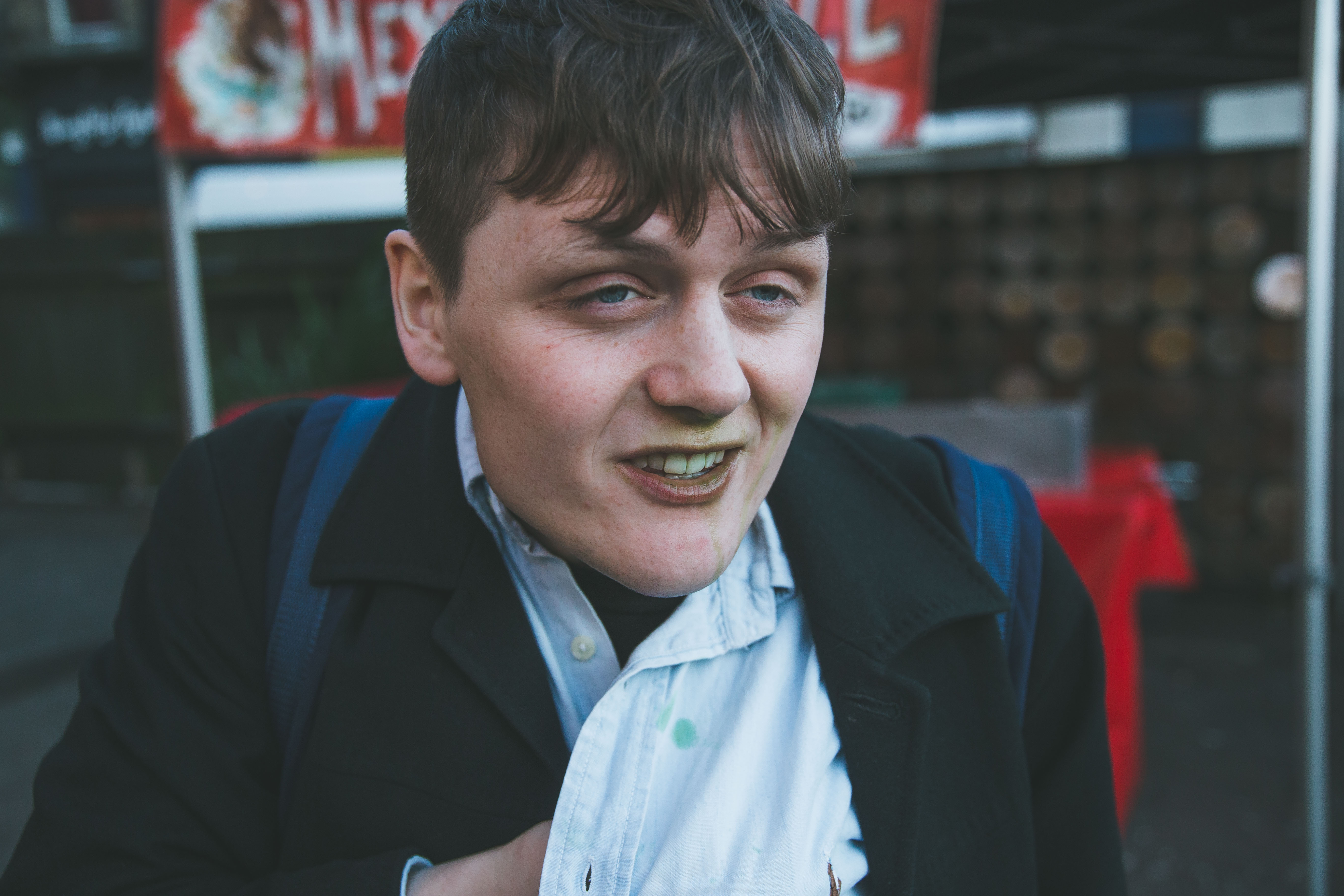 Beginning to feel the warm embrace of Central America, it's time for the final hack.

10) Clean Out a Suntan-Lotion Bottle, so Your Stuff Never Gets Stolen, Pinhead! 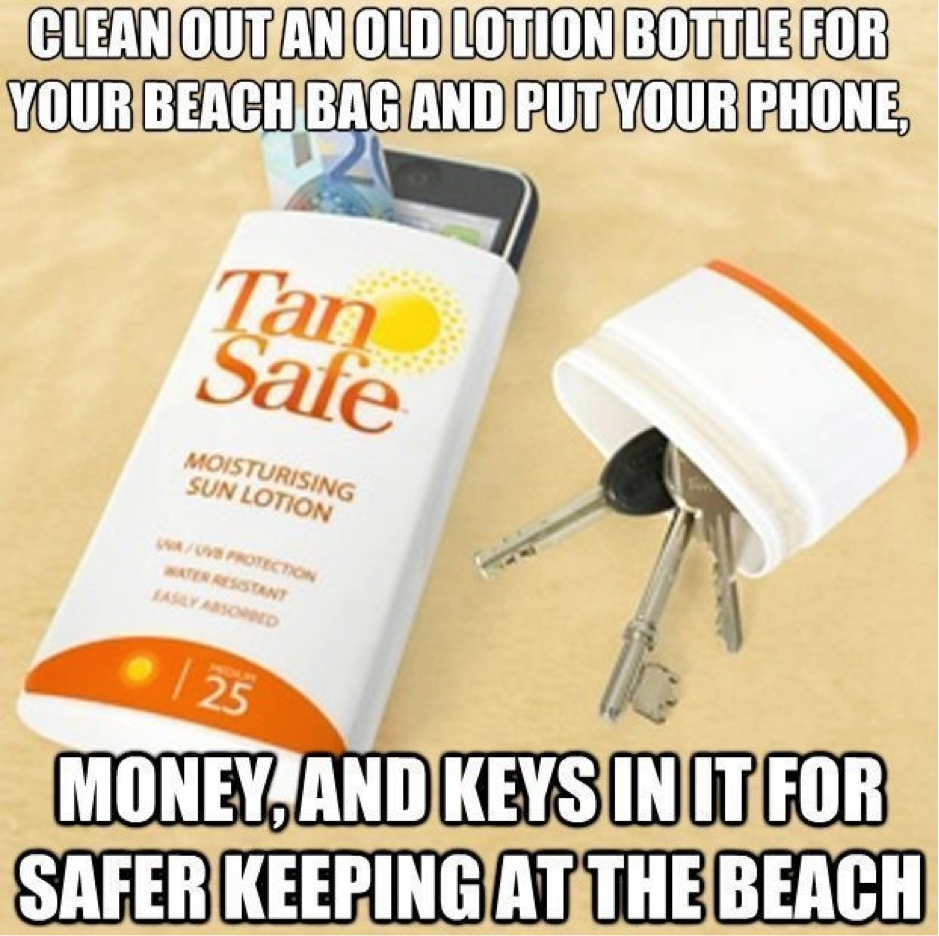 Over the past 12 months, I've lost two wallets and had two phones mugged. I've also lost one bike helmet, four sets of headphones, a metro card, three bags of clothes, and multiple other bits and bobs while out drinking. So, naturally, I was drawn to this one. 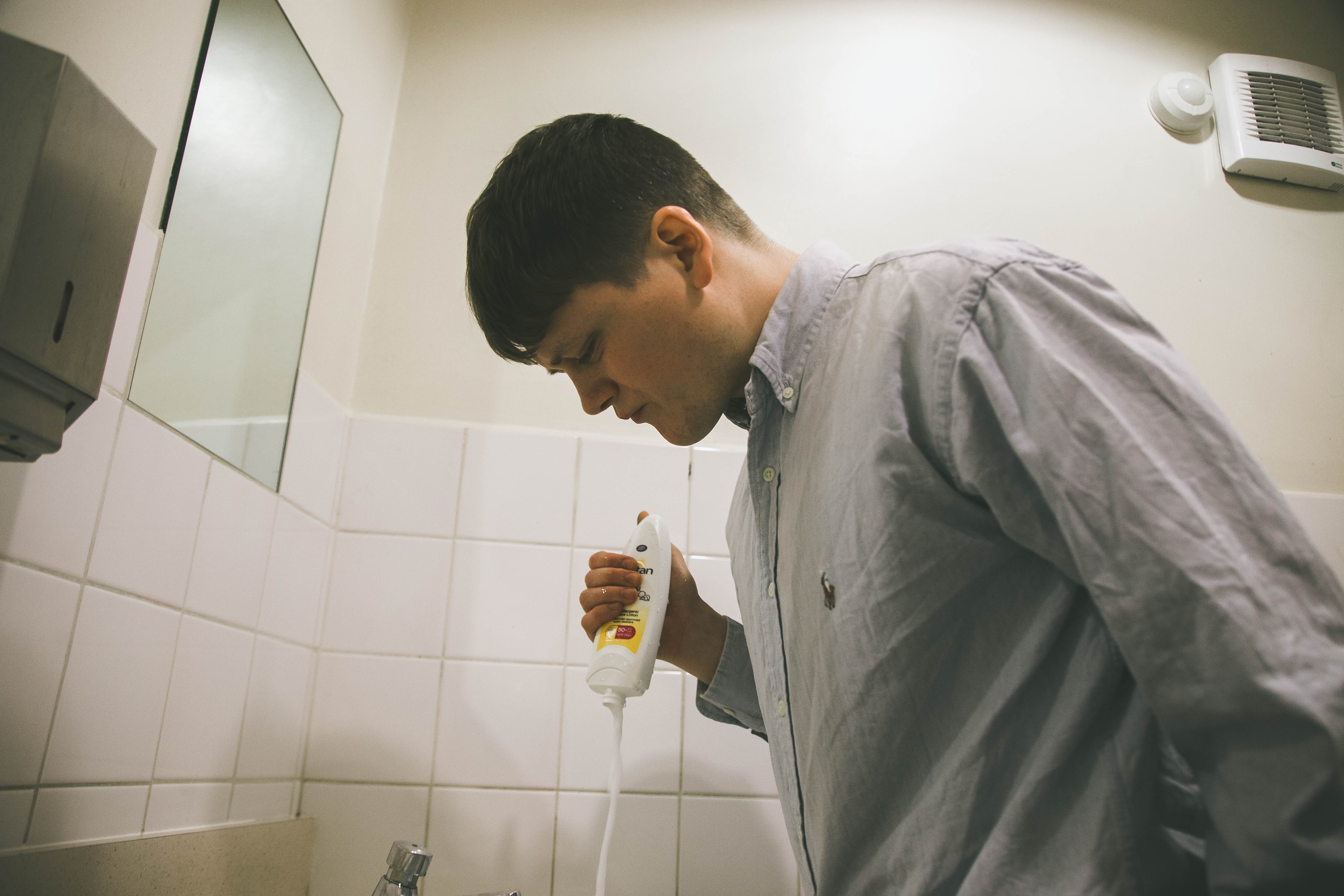 I'm in the toilet, decanting a sun-cream bottle and making my very own time capsule containing a passport photo, $24.89, a spare bike key, some tobacco, an open train ticket to Redditch—a neighboring small town in England—and my phone number, to call if found.

Now I just need to plant it. 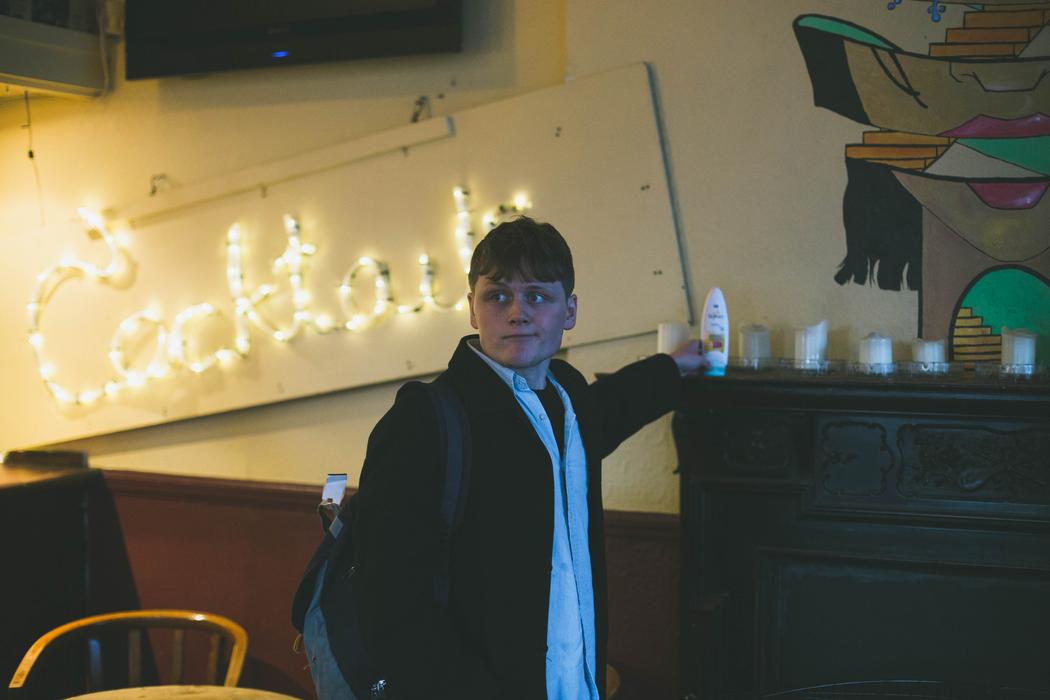 Hours pass, and I work my way through the entire bottle of mouthwash. I make friends. I discuss current affairs in the bathroom. My photographer Theo leaves. A man from Essex pretends to be Norwegian, completely fooling me. We laugh. I'm invited back to a party and—after leaving at closing time—head over to retrieve my capsule. 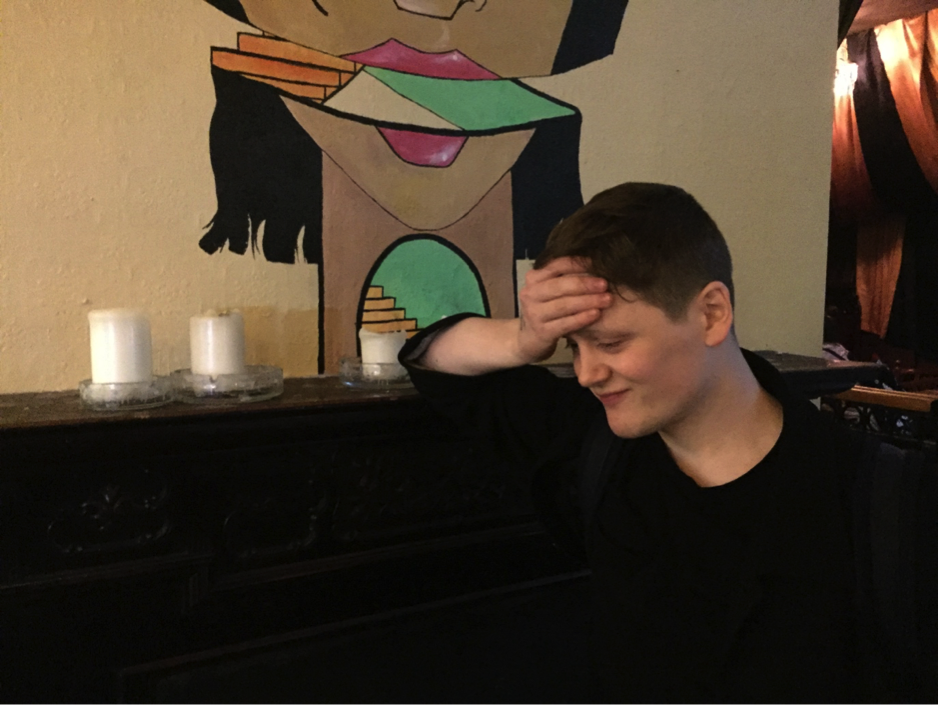