The YouTube video shows girls convulsing in hospital beds, on the floors of their schools, losing control of their bodies, unable to walk or talk.

The young women have allegedly just been given shots of the HPV vaccine to prevent cervical cancer. Instead of a life-saving treatment, they're left crippled, "chemically lobotomized."

A voice over the disturbing footage screams: "I am not a slave. You cannot force me to inject my kid with this poison. This is sick!"

That voice belongs to Owen Shroyer, a reporter for Infowars, the right-wing, conspiracy-theory laden "news" site. He's anchoring a classic Infowars health segment, featuring a passionate rant against mainstream medicine. In this case, the subject is a favorite on Infowars: "vaccines and the damages they do to our youth." 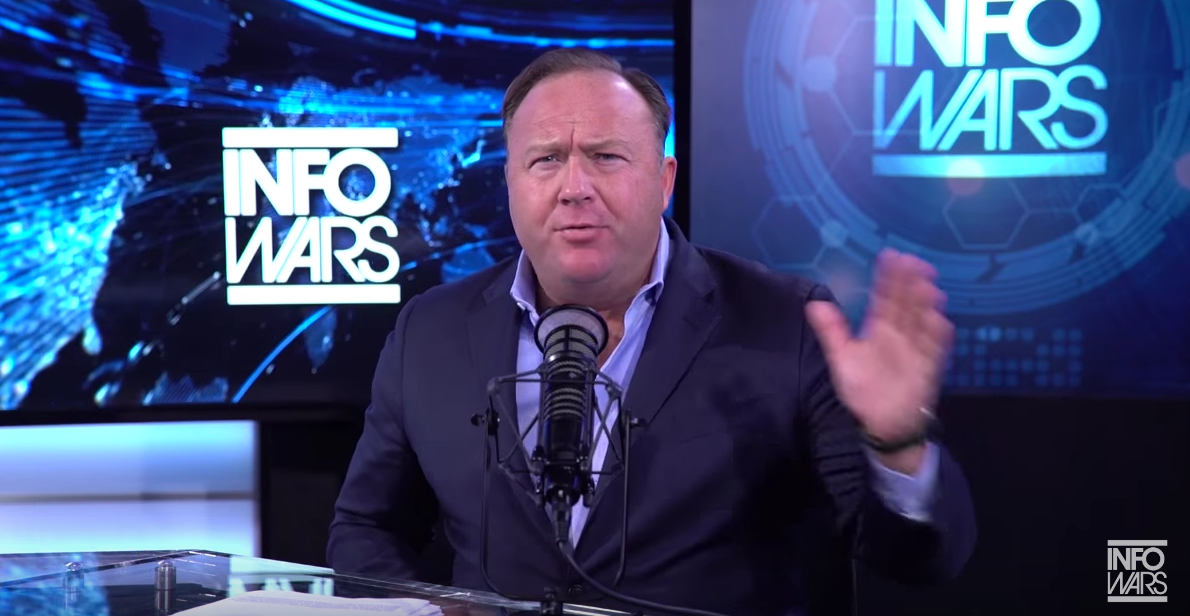 When Shroyer appears onscreen again, his face is flushed and twisted in rage. "You know what? I'm sorry — but F you! Okay?" he says, squinting at the camera. "F you if you're going to sit here and watch a video of young girls literally convulsing because of a vaccine that you say is safe and effective. F you! You're disgusting."

If you know anything about the HPV vaccine or vaccine safety, it's easy to dismiss this video as fringe lunacy. But Infowars is no longer a peripheral media player. The website now reaches more than 6 million unique US users each month. The YouTube channel has more than 2 million followers — about as many as Vox.

I watched more than six hours of the show, and came away steeped in a dark view of the world. On Infowars, truth is provisional, science means nothing, and you can't trust anyone — especially not your doctor, researchers, or experts of any kind. This is a parallel information universe, with deep suspicions of the establishment and government agencies and a deep appreciation for the populist president, Donald Trump.

As a medical reporter, I've written a lot about shady peddlers of health misinformation; Infowars felt like familiar terrain. Exaggerated claims, cherry-picked studies reported out of context, and the promise of treatments and foods that will either kill or cure are more the rule than the exception in this corner of journalism.

But Infowars made Dr. Oz and the Food Babe seem benevolent. The show goes so much further than simply misleading people about their personal health choices and a range of other subjects. Jones and Infowars are part of a political movement aimed at undermining and delegitimizing the institutions that are fundamental to democracy — especially science. They also have connections that run all the way up to the White House.

Alex Jones is an ally and champion of President Donald Trump, who told Jones in a 2015 interview, "you have an amazing reputation." Trump may disparage institutions like the New York Times and Washington Post on Twitter and Fox News, but he shares Infowars articles and videos.

It doesn't seem to bother the president that Jones has a long history of spreading conspiracy theories through his various media channels. Jones launched his first radio show in 1996, and the day after 9/11, went on the air calling the tragedy "an inside job."

A theme he returns to again and again is that the US government is actually controlled by an international faction called the "New World Order." The globalists — big banks, billionaires, mainstream media, pharmaceutical companies — are actively conspiring against the interests of regular Americans.

Jones has said Oprah Winfrey is trying to reduce the African population by half, Sesame Street's new autistic Muppet was designed to normalize an increasingly common disease that's caused by vaccines, and that the Atlantic magazine and other leftie periodicals are hinting at an imminent decapitation of President Trump.

In this world, Andrew Wakefield, the discredited doctor who falsified data to suggest vaccines are linked to autism, is a "pioneer" and "trail blazer" who just wants to help keep people healthy. By contrast, Bill Gates is running a mass eugenics effort through his charitable work, and the HIV epidemic was actually created by the American government (which has incidentally been part of a Russian disinformation campaign about the US government).

Jones often talks about the child pedophile rings that elites are helping to organize, and his suggestion that Hillary Clinton was running one out of a pizza restaurant in Washington, DC was the reason a man walked into that shop with a gun last year, threatening to kill people in what has become known as Pizzagate.

Inciting violence is one problem with the show. Less obvious but equally worrying is that, over the years, scientific experts and doctors have been popular targets, and empiricism and rationalism are under constant attack.

An imagined "fungal epidemic" and miracle supplements to stop it

According to Infowars, vaccines are just one part of a "serious attack on our health." It's also happening with fluoridation of the water supply, GMOs in our food, the chemicals in the environment, and the medications prescribed by doctors.

More recently, Infowars has aired segments about another health problem you've probably never heard of: "a rarely discussed fungus epidemic [that] is spreading throughout America." It's a useful example of how the site spreads misinformation and denigrates science.

Instead of actual researchers, the fungus segments feature Infowars associate Dr. Edward Group. Group is not a doctor, but a naturopath who also frequently alleges that researchers and mainstream medicine are colluding with government in a mass conspiracy to poison people. He's said FDA officials raided his office because he was on to a promising cure for cancer. (I reached out to Group to interview him for this story. He declined the request.)

To establish this fungus epidemic, Group draws on science — or the feeling of science. He talks about all the research he's done, and refers to citations from stacks of papers in front of him to support the idea that fungus and yeast overgrowth is causing everything from brain tumors to brain fog, skin conditions, itching, difficulty with your vision, anxiety, fatigue, and the obesity epidemic.

"It really is a problem most people are not familiar with," Group says on the show. The scientific community is deliberately hiding this fungus from view. "As a matter a fact, most doctors and hospitals really do not take the time to check people for fungal infections."

Not to worry: Group and Jones have the solution.

They are peddling supplements called Myco-ZX to fight an epidemic they've invented. Group claims the pills cleanse the body and boost the immune system "to fight fungal overgrowth." These fungus-fighters are one of numerous health products hawked on the show. 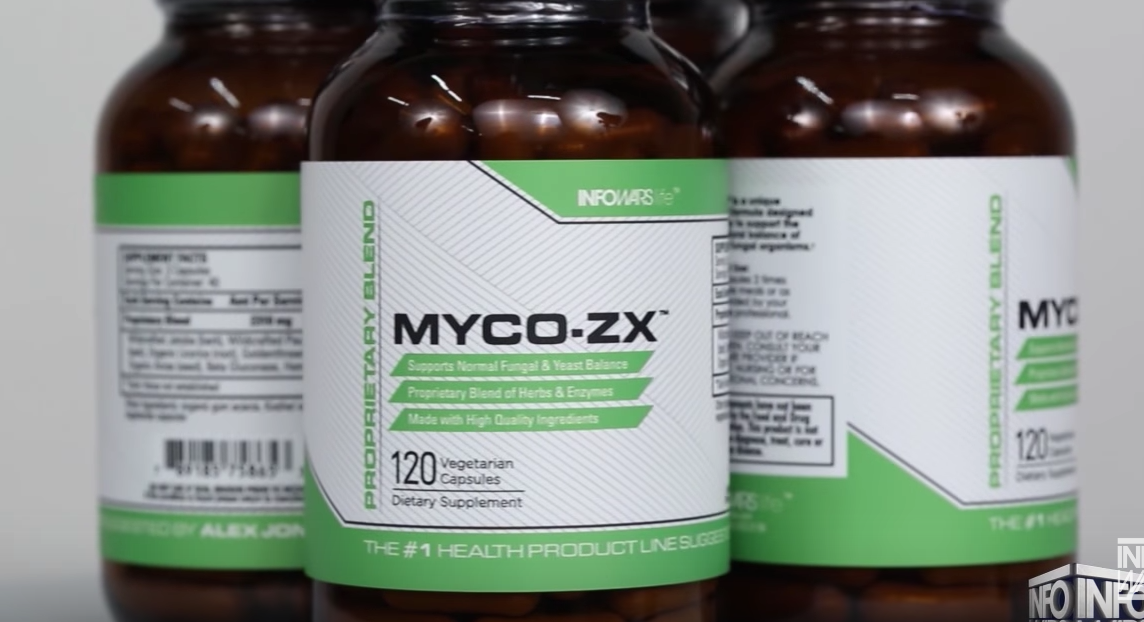 Myco-ZX, a supplement to cure a fungus epidemic Infowars invented.

Watching these segments, I felt confused, disturbed. I understood why people might believe Jones and Group. It's hard to falsify many of the health claims they make. They also draw on real uncertainty and problems in science — medical studies are often funded by the drug industry; the industry has done shady things — to undermine the entire research enterprise.

The health care system has also failed many people. Doctors make mistakes and leave patients jaded and credulous of their expertise. Medicine has come so far over the past century, but it often falls short of patients' expectations. It's not difficult to see why the quick fixes and simple solutions Jones offers — the "game-changing" pills to fight the fungus that's really causing all your health woes — might resonate with millions of Americans.

There's also the current political climate to consider. "An environment in which people are distrustful of institutions can be fertile ground on which to promote conspiracy theories," said Brendan Nyhan, a professor at Dartmouth College who researches misperceptions about politics and health care. With Infowars, Jones is tilling that soil.

Why Alex Jones is more dangerous than Dr. Oz or other quacks

Exaggerating scientific uncertainty to sow doubt and confusion is nothing new. We saw this during the tobacco wars. We see this in the ongoing "debate" about climate change (which scientists agree is not actually a debate). "Fake news" isn't novel either, nor is medical misinformation on the internet.

What's different about Infowars is the concerted effort to undermine institutions and politicize topics that have mostly been neutral — like immunizations for children.

Dr. Oz may have brought anti-vaccine campaigners on air or spread magical thinking about health, but he didn't wrap it up in identity politics. Jones and his associates do, making a rejection of the medical establishment and science part of what it means to be on the populist right.

"If to be skeptical of vaccines means to be a good conservative [there's a problem]," said Alan Levinovitz, a professor of philosophy and religion who has been studying pseudoscience. "This misinformation is dangerous when it gets tied up with political ideology."

It's concerning in part because of the right wing media's growing influence over the GOP. Infowars frequently calls on Trump to enact policy based on conspiracy theories. "Sign an executive order to take fluoride out of the water!" Group said once. And while the administration doesn't seem to be entertaining that particular idea, it's conceivable that the show could have some influence over the shaping of vaccine or abortion policy — with deadly effects.

Science as an institution has, for hundreds of years, been viewed as the best method for producing knowledge. Until recently, science has also been relatively sacred across administrations, across partisan lines, said Dietram Scheufele, a professor of science communication at the University of Wisconsin Madison. "Once we start eroding [science], we get into dangerous territory," he added. "Think about how important science is for national security, how important it is for business. The very laptops this stuff is being written on wouldn't be possible if not for the science that's under attack."

This war on science playing out in the right-wind media is poised to damage one of our most valuable institutions — a key driver of the economy, a source of our military strength and leadership in medical and technological innovation. In the Infowars universe, though, science is the enemy — part of the globalist elite movement that's poisoning people, keeping them down. Anyone who cares about evidence and science: Ignore this seething movement at your peril.