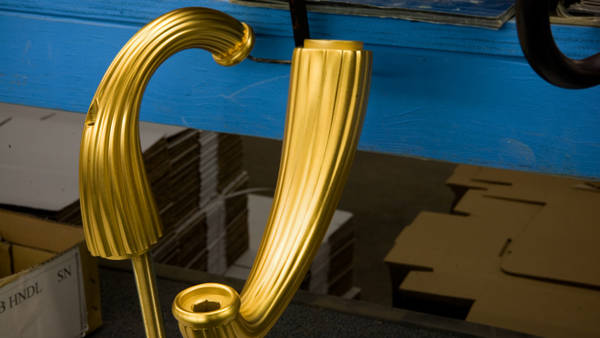 Viktor Sitnikov assembled a faucet at the Watermark Design factory in East New York on Thursday.

“Every last piece is pressure-tested before it goes out the door to China,” said Jack Abel, the engineer who built the factory. “Or anywhere else.”

Yes, he did say China.

Mr. Abel’s company, Watermark Designs in Brooklyn, is standing history on its head: it is making plumbing parts and shipping them to China.

After generations of manufacturers in New York and across the United States folded because they were unable to compete with imports, Watermark, with its only factory in the East New York section of Brooklyn, has managed to crack the code. Instead of trying to make Watermark’s products cheaper, Mr. Abel has prospered by first making them more expensive — offering custom-made fixtures unique to each building — and then figuring out how to do that at lower cost. The company has supplied thousands of fixtures to six new luxury hotels and condominiums being built in Shanghai, Macau and Hong Kong.

“The days of mass producing in New York City are gone,” Mr. Abel said. “If you were producing nuts and bolts by the tens of thousands 50 years ago, you’re not going to do it today. But creativity, or uniqueness or design is definitely something that can flourish in New York.”

Just as they have in many parts of the country, exports have taken up the slack for the business that Watermark lost during the economic downturn that began in 2008. The New York metropolitan area led the nation last year in exports, rising to $105 billion, its highest ever, from $85 billion in 2010, according to a report released last week by the International Trade Administration, a branch of the United States Department of Commerce that supports companies doing business overseas.

Fencing and flooring for dance clubs, stadiums, and big tents are being made in the Bronx by Signature Fencing and Flooring and shipped to South Africa, Japan, Britain and India. From Medford, on Long Island, Enecon, which makes corrosion-resistant coatings for industrial equipment, ships to 65 countries.

Manufacturing jobs in New York have declined by about 80 percent from a high of 1.1 million jobs in 1947, all but shutting down what had been a heavily trod avenue into the middle class for immigrants and people without advanced educations.

Mr. Abel, who was born in Israel, grew up in the Bronx and studied engineering at the City College of New York and Columbia University, started his business in 1976 in a small metal plating company that his father ran from a 2,000-square-foot storefront in Sunset Park, Brooklyn. For a number of years, it did well and grew by refinishing inexpensive parts and selling them through neighborhood bath stores and the early home improvement centers. Mr. Abel moved into supplying high-end fixtures just as the city was entering a period of luxury construction.

It was a strong strategy, made possible, Mr. Abel said, by his son Avi, who joined the business after graduating from the State University of New York at Binghamton (now Binghamton University) and among other things, overhauled its design capabilities. Around 2006, Watermark bought a three-dimensional printer for $60,000. It works like an ink jet printer, except that it squirts molten plastic to build a form, instead of ink onto paper.

Robert Brenner, 26, a design engineer for the company, showed a plastic prototype of a handle made to an architect’s specifications. “This took three to four hours,” he said.

After the prototype is approved, Watermark tunes its lathes and milling machines to make the actual parts. In such a world, cheap labor is a dwindling advantage. “I can get the best equipment,” Mr. Abel said. “I can’t get someone to operate it — machinists, machine programmers, people with knowledge how to operate sophisticated equipment, they’re not there.”

Nearly 40 years after starting in the storefront, the company employs 45 people in 55,000 square feet. Most of the workers have been with the company for 10 years or more. Besides high-tech equipment, the company now has something else that wasn’t available years ago — Brooklyn chic.

“My son says we should stand on a box and shout it loud: ‘This is made not only in the U.S.A., but in Brooklyn,’ ” Mr. Abel said, “It’s what Paris had been. We have become a design mecca.”