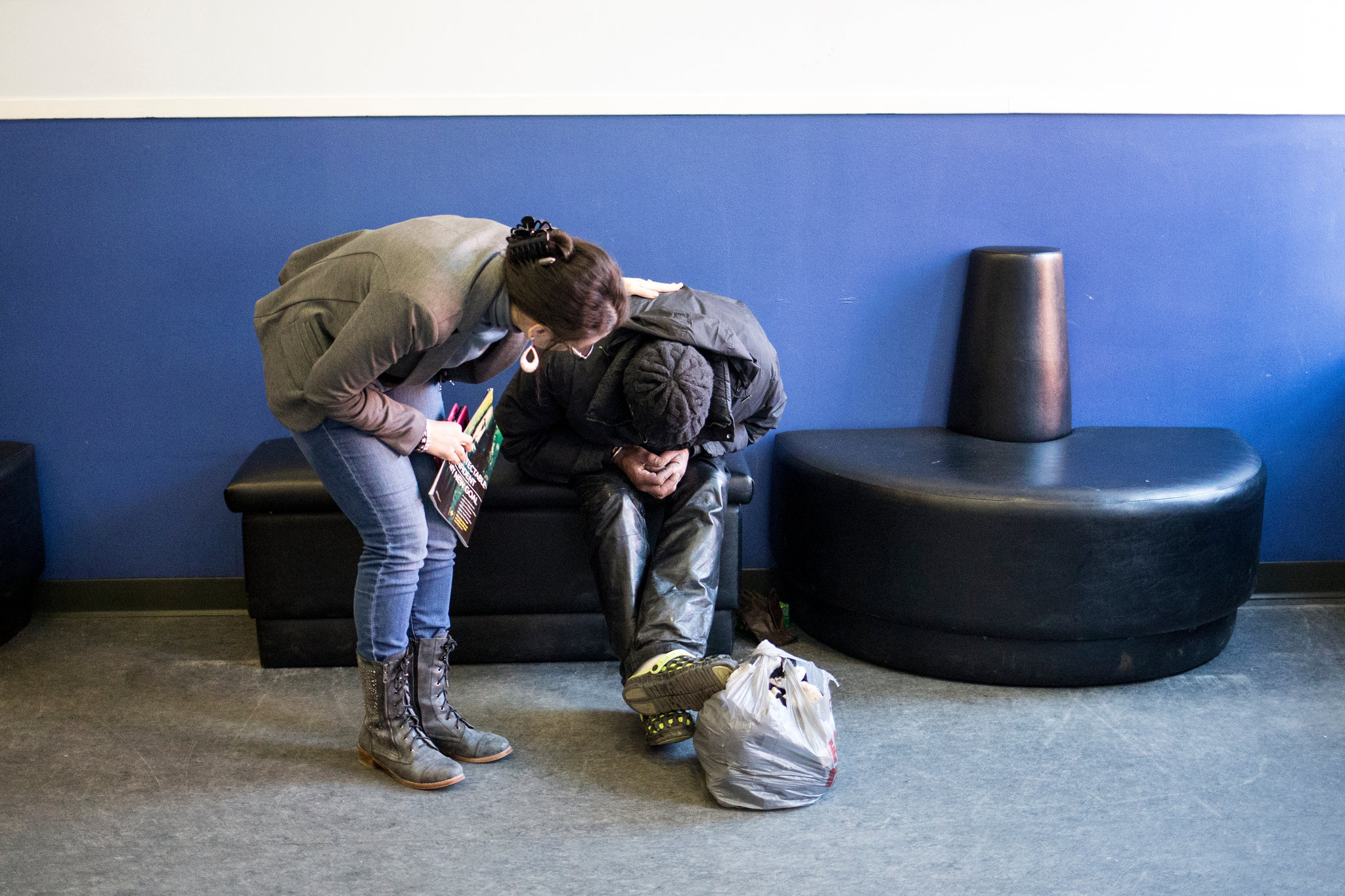 Jasmine Ramirez, left, a care manager at Boom!, a drug-treatment center in the Mott Haven section of the Bronx, talking recently to a participant in the lobby.

During the 1970s and '80s, Sojourner McCauley, who grew up in the Melrose Houses in the South Bronx, was known as a "garbage head." Garbage heads were catholic in their drug tastes, getting high on whatever was around. Until she stopped at the insistence of her children 30 years ago, Ms. McCauley, who is now the coordinator of community services at Boom, a drug-treatment center in Mott Haven, had multiple addictions, she said recently, including a dependence on heroin, whose devastating movement through the Bronx she has observed for decades, never noticing a time it was absent.

If the South Bronx were a state (its population of more than a half-million makes it roughly equivalent to Wyoming's) it would have the second-highest rate of drug overdose deaths — 34 per 100,000 people — in the country, after West Virginia. The majority of these deaths are due to heroin, which during the past several months has arrived in New York, as it has in many other places around the country, laced with fentanyl, a painkiller typically used to treat late-stage cancer patients, and 50 to 100 times more potent than morphine.

Most of what is getting here, said Dr. Mary T. Bassett, New York City's health commissioner, seems to come from China; since July, nearly half of all fatal drug overdoses in the city have involved fentanyl.

News memes take hold easily in the national consciousness, and the emphasis on the opioid crisis as a plague of the white rural and Rust Belt underclass has obscured the toll the problem has taken in major cities and among the urban poor. Last year, there were more than 1,300 overdose deaths in New York City; such fatalities have been on the rise since 2010. More than 80 percent involved painkillers or heroin. In Philadelphia, whose population is less than a quarter of New York's, 900 people died of drug overdoses in 2016, a 30 percent increase over the previous 12 months. In the Overtown section of Miami, a largely poor minority neighborhood, emergency workers dispensed Narcan, an emergency treatment for opioid overdose, 1,700 times during the first nine months of 2016, more than double the rate of the preceding year. 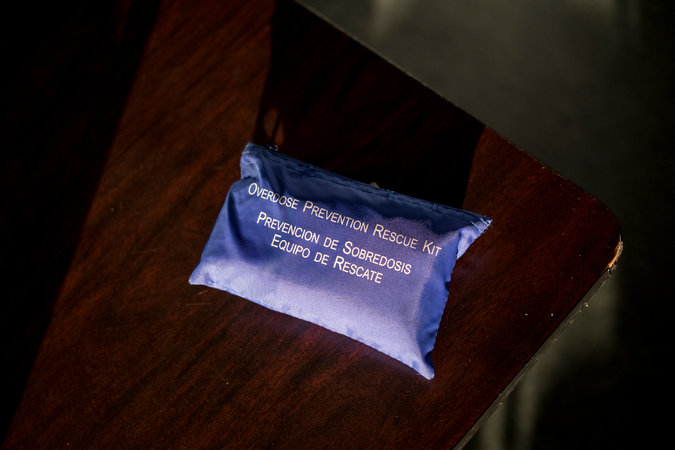 An overdose prevention kit at the center.

In the Bronx, among people like Ms. McCauley who work with addicts, there is an aversion to the notion that the crisis has only recently emerged. At Boom, staff members I met with last week talked about the persistent presence of heroin in the area, a problem generally ignored by the larger world.

"When people talk about this epidemic as something new, it's not," José M. Davila, Boom's president and chairman, told me. "The opioid epidemic has been rampant here for a long time."

The problem did not grow dormant after the 1970s — when the blight of heroin in the Bronx commanded a great deal of attention — and then resurface. An article in The New York Times in February 1991 with the headline, "At the Fast-Turning Hub of the Heroin Trade," gives a sense of how little has been upended. It pointed out the dangerous popularity of a new brand of heroin tainted with fentanyl that had become a killer.

What we are seeing today is a protracted living history, the residual effects of previous traumas as a generation of men and women who grew up with addicted parents now find themselves, in middle age, similarly in the thrall of heroin. 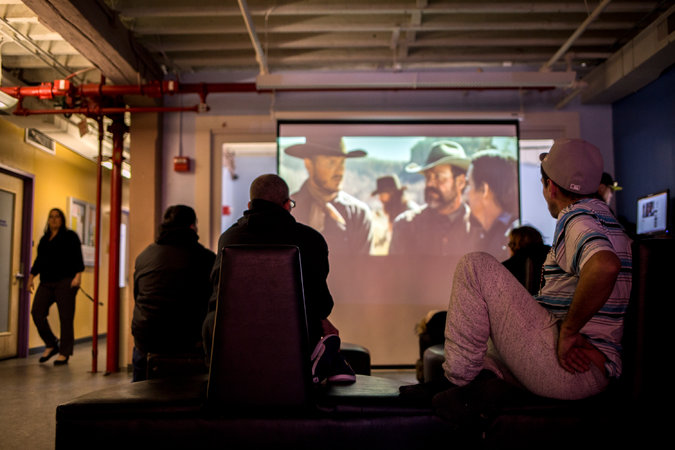 Clients at the drug treatment center watching a film.

Boom operates according to the principles of harm reduction; it does not aim to push everyone who walks in the door toward recovery. Instead, it offers an array of health services, including a needle exchange program and counseling about managing addiction, if handling life more effectively while using drugs is all the client can foresee. (Last year, when a spate of young women came through the door at about the same time, all pregnant, the first thing that caseworkers did was give them a baby shower.)

On the afternoon I visited, some clients were seated together watching a "Bourne" movie; nearly all were men in their 40s and 50s. In that sense, the opioid crisis in the Bronx looks as it does elsewhere in the country; a sizable number of the addicted are men who never reaped the benefits of the economy that bestowed so many riches on the well-educated over the last 20-plus years. The difference is that nearly all of the men in the room watching Matt Damon were black or Latino and had not found their way to their particular addictions through prescription painkillers, which have been the route, to a great extent, for whites. Studies show that doctors have historically prescribed fewer pain medications to blacks than whites — the result, the theory goes, of an implicit bias about the propensity to develop a habit.

And yet the Bronx had the highest number of overdose deaths of any borough in 2016. Although overdose rates actually decreased for whites in the borough last year, they went up for both blacks and Latinos, who accounted for the vast number of deaths.

This comes at a time, of course, when proposed cuts to drug treatment tied to the fate of the Affordable Care Act could mean a virtual obliteration of services for the poor, a situation Dr. Bassett sees as "catastrophic."

The last presidential election revealed a vast rural and urban divide in the country, and yet the opioid crisis has emerged as a ground of shared misery. The attack on it offers some hope for bipartisan healing. Can that hope be fulfilled?

A version of this article appears in print on March 26, 2017, on Page MB1 of the New York edition with the headline: It Never Left.