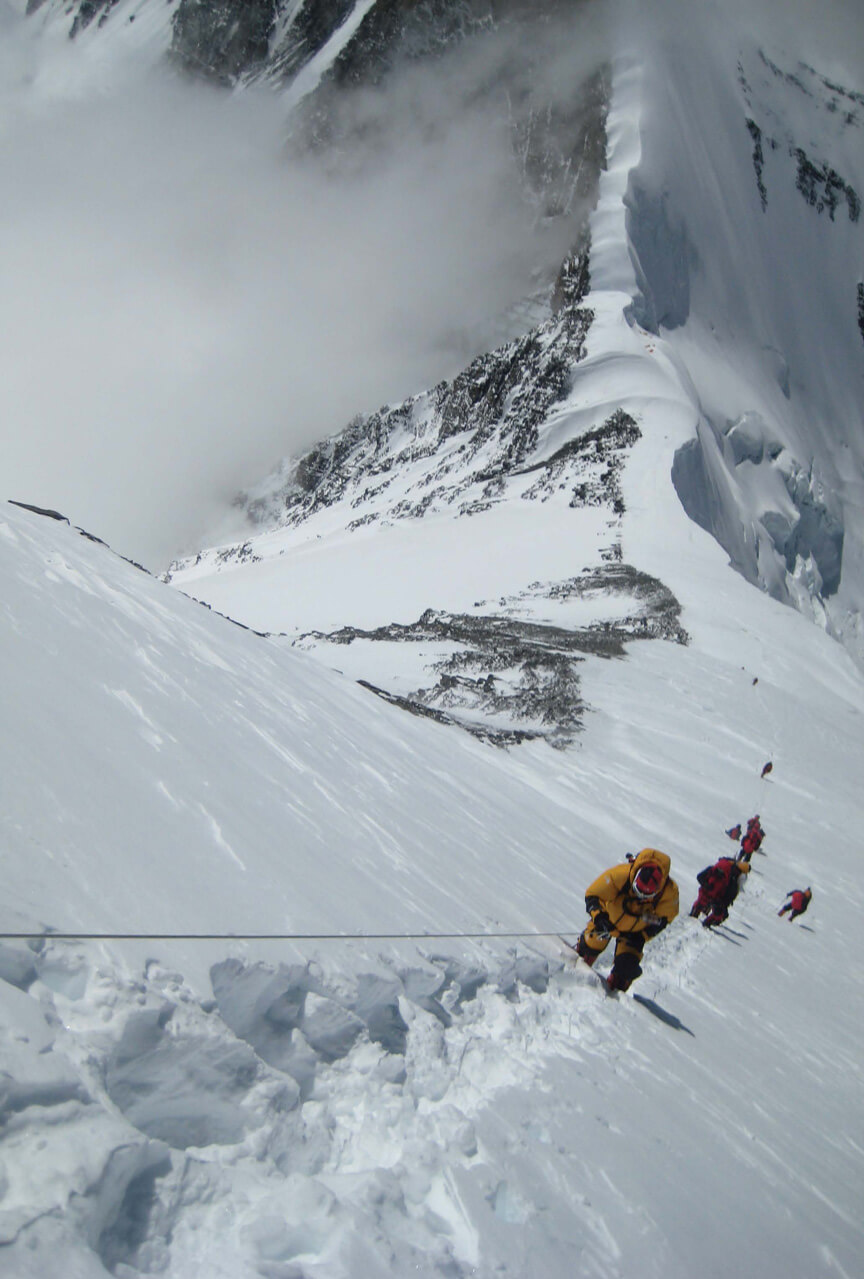 There's an image that's been seared into my mind for a few years now. It's the face of a man I barely knew but considered a friend nonetheless. I can still see him in the night when I close my eyes. He doesn't smile. He doesn't scream. He just looks at me from beneath a layer of frost-covered flesh. When he visits me, I don't sleep. He remains as I left him, seated near the top of the world, trapped in the Death Zone.

Before I tell the story of that friend and his small place in the larger narrative of my life, let me explain that it's because of that man that I now have a different definition than most people of what is commonly referred to as the Death Zone.

In order to understand what I'm trying to say, you have to believe that I have never climbed a mountain in order to stroke my ego or to say that I did it. On some level, I climb for the same reason an otherwise fully functioning man steps outside his office to fill his lungs with the smoke he knows could one day kill him. I climb because I'm weak. And I can't not climb.

And so I dragged myself back. To that place high in the sky where man was not built to survive. There, on the North Col, that frozen ridge that divides your world from mine, I found myself caught in yet another snowstorm in the dark of night. A year had passed since I lost my crampon in the snow and forced myself to turn around, exactly one year since I was last here with Elia and Richard. And though neither of them was with me now, I had been drawn back. Haunted by my own defeat.

Standing motionless in a cloud 8,300 metres above Tibet, setting out from Camp 3, an oxygen mask pressed to my face, I took a deep breath of compressed gas and wondered how many more steps it would take before I'd poke my head above the storm and begin seeing stars. I was just a few hours shy of the Earth's summit and feeling deceptively strong. My blood was turning to sludge; my brain and lungs were slowly swelling as my heart pounded against my chest. I was dying, but I felt inspired. Optimistic even. I was three hundred metres into the Death Zone, yet still hours away from my goal.

Lhakpa, the Nepalese Sherpa with whom I'd climbed many times, stood in the falling snow lit up by my headlamp. We'd been climbing for thirteen days. We'd crossed into Tibet to follow in my own footsteps and then push beyond the place where I'd acknowledged defeat. There was no fame to be had this time, no media interest in my ascent. It was just us and the mountain and the ghost of the previous year.

But now we were stuck in a traffic jam of climbers. We were like statues slowly disappearing under the snow. The only difference between our bodies and the frozen corpses on the mountainside were the flickers of light coming from our foreheads.

A nudge on the rope from the South African at my back encouraged me to take one more step closer to the peak, but the traffic jam ahead still left me with nowhere to go. It was just before dawn on May 24, 2010. We'd begun this final ascent shortly after midnight, when the thunder and lightning below stopped terrorizing our climb. We'd crossed into the Death Zone eighteen hours earlier. I still felt strong, but I knew that as we stood in line, unable to move, the chances of joining George Mallory up here for eternity increased with every minute. Frustrated, energized, and giving in to a momentary fit of summit fever, I unhooked from the rope connecting us with the other climbers and followed Lhakpa as he found his way around the stationary bodies standing in the snow. Free from the lineup, we trudged up the mountain, our crampons clinging to the ice beneath the snow under our feet as we passed the First Step, a wall of boulders marked by the body of an unidentified climber known only for the green of his boots. Then we got to the arduous Second Step, where Mallory was likely forced to turn around in defeat. Up the ladder we climbed and onwards into the fog until we reached the Third Step—a ten-metre cliff wall just 138 metres from the top.

That's when I saw him: my friend and countryman Frank Ziebarth, sitting at the base of the last true obstacle on our way to the summit. The night had turned into a grey morning, and he was resting in the falling snow. He was sitting barely an arm's length from the path to the top. The orange of his jacket was getting quickly covered up with white. He'd managed to summit without oxygen, but it had nearly killed him. He'd barely begun his descent when he had to sit down to catch his breath.

I avoided looking directly at him. There was nothing I or anyone could do to help him now. I stared into the rock wall beside him and whispered down to him, "I'll be back, Frank." Then I lifted my arms above me, grabbed hold of the cliff wall, and continued for the top.

Lhakpa was already above the wall, waiting for me to join him. With our crampons digging into the mountain's side, we took turns leading each other until we found ourselves with nothing left to climb. It was 9 a.m. and we were standing on the barren tabletop marked by Buddhist prayer flags and sobbing men kneeling in the snow. I stuck my ice axe next to Everest's peak, pulled off my mask and gasped for whatever oxygen my lungs could pull from the air.

At 8,848 metres above the sea, every breath I drew outside my mask was slowly suffocating me. But I didn't think of that. I was too busy taking in the beauty of the moment. I'd been fantasizing about getting back to this place ever since I'd left it. Now I was one of a select group of people to summit Everest from both its southern and northern face. I looked down on the world and wept at the thought that no other human on Earth stood higher in the sky. I pulled out my satellite phone, called Annie, and texted Alexandra and the girls in Montreal. It was the middle of the night where they were. I was full of joy the moment I heard Annie's voice on the phone.

I sat down in the snow and stared into the clouds that spread out over the Tibetan plateau under my feet. Then I spoke to the mountain.

Then I looked to my right, to the very place where, five years earlier, I'd strapped the khata with Sean's ashes to a Chinese tripod. I looked for it, but it was nowhere to be found. Perhaps it had been swept off the mountain by the winter jet stream and its hurricane-force wind or buried under a fresh layer of ice and snow.

Seated above the world, the lack of oxygen slowly distorting my mind into a state of ecstasy, I wanted to stay here for as long as possible. I knew I was in danger, that hypoxia would soon render me delusional. I'd been up here for over two hours, and with every passing minute at the summit, my body grew weaker and my chances of surviving the descent got worse. If I didn't get moving, I'd soon become nothing more than a preserved corpse frozen to the summit. While a steady flow of climbers approached me from both the north and south, I got up, took one last look at the peak of our world, and said, "I'll see you again." Then I reattached my mask, filled my lungs with some much-needed oxygen, nodded at Lhakpa, and started back down. When we got to the top of the Third Step, I turned my back to the clouds, squeezed the toes of my boots into the mountain, and climbed down to the base of the wall. Frank was still there, exactly where I'd left him hours earlier. I looked at Lhakpa, told him to carry on without me, and then sat down by my friend's side.

Frank had been sitting there for just over a year. He'd climbed to the top without oxygen, but he'd been so focused on that goal, he'd refused help from everyone else on the mountain, even as it became clear to those around him that he wasn't going to make it. When he sat down to catch his breath at the base of the wall, he slipped into a coma and died. His death was a result of high-altitude cerebral edema. But it was entirely self-imposed. He'd succumbed to the one danger that scared me the most, the one you can't see: the danger from within.

Frank's face was masked by a twenty-centimetre layer of fresh snow. A year earlier, just before his death, he'd told me how he planned to stand on the summit with a banner above his head, asking his girlfriend to marry him. Now I'd been asked by that same girlfriend to remove his corpse from the well-worn path to the summit. She didn't like the fact that people stopped to look at him on their way up the mountain.

I looked at the orange of his jacket, barely visible now beneath the snow. Then I found myself speaking to him from behind my mask.

"Why'd you do it?" I asked. "Why'd you sit down? You killed yourself. Christina asked me to move you. She misses you. I'm sorry. I don't want to do this. But I have to. I told her I would." Exhausted and with little time and oxygen left, I put my arms around his body and tried to move him. I couldn't. His body had frozen to the mountainside. I tried the only other thing I could think of. I started searching for the banner and his camera so that I could bring them home to his girlfriend so she could see what he saw before he died. Rummaging through a dead man's pockets, I found nothing but an extra pair of gloves. When I began looking around his collar, a layer of snow fell to his chest, and suddenly I was staring at the face of the man I once knew.

My mind froze and I began gasping inside my mask. I don't know how long I stood there staring at him. Soon, I was reaching for whatever snow I could find, packing it back into place. But there was no covering up what I'd just seen.

Turning away from my friend, I stumbled down the mountain until, finally, I looked over my shoulder and found his body had disappeared into the cloud.

Six years on, his frost-covered face remains exactly where it's been ever since that day: trapped inside my head. If only it were alone in there, I might not be writing this today.

Excerpted from The Escapist: Cheating Death on the World's Highest Mountain by Gabriel Filippi with Brett Popplewell © 2016. Published by HarperCollins Publishers. All rights reserved.

Gabriel Filippi is the second Canadian to climb both faces of Everest. He is from Lac-Mégantic, Quebec.

Brett Popplewell (@b_popps) is co-author of The Escapist, which will be released this fall.

Get the Walrus Weekly newsletter

On raising a black boy in the US

Insights into the human condition from a not-so-trivial pursuit

Visiting Twitter Canada's HQ, and asking: Can this platform be saved?

Why Canada wins at immigration