In the mid 17th-century John Comenius published what many consider to be the first picture book dedicated to the education of young children, Orbis Sensualium Pictus - or The World of Things Obvious to the Senses drawn in Pictures, as it was rendered in English. Charles McNamara explores how, contrary to Comenius' assertions, the book can be seen to be as much about the invisible world as the visible. 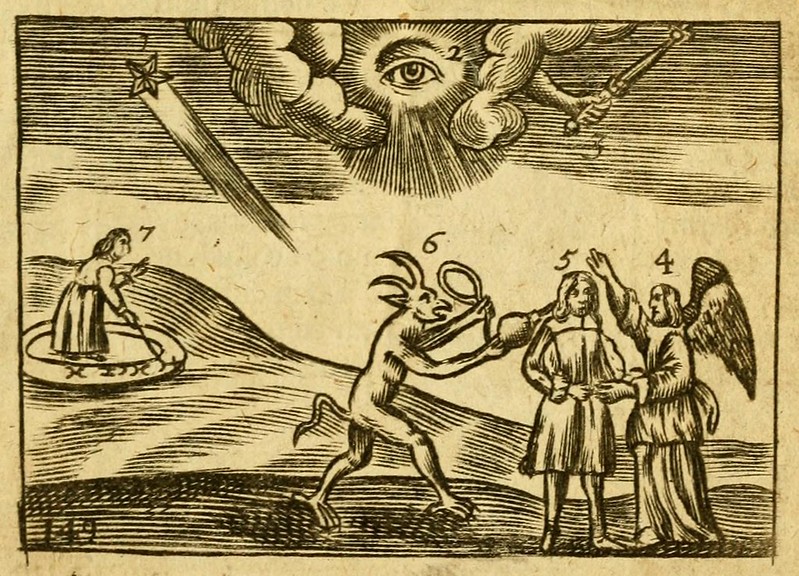 Illustration for "God's Providence", from the 1705 English edition of Orbis Sensualium Pictus - Source.

John Comenius' Orbis Sensualium Pictus (The World of Things Obvious to the Senses drawn in Pictures) is, according to the Encyclopaedia Britannica, "the first children's picture book." Originally published in 1658 in Latin and German, the Orbis — with its 150 pictures showing everyday activities like brewing beer, tending gardens, and slaughtering animals — is immediately familiar as an ancestor of today's children's literature. This approach centered on the visual was a breakthrough in education for the young, as was the decision to teach the vernacular in addition to Latin. Unlike treatises on education and grammatical handbooks, it is aimed directly at the young and attempts to engage on their level.

The Orbis was hugely popular. At one point it was the most used textbook in Europe for elementary education, and according to one account it was translated into "most European and some of the Oriental languages." Its author John Comenius, a Czech by birth, was also well-known throughout Europe and worked in several countries as a school reformer. His portrait was painted by Rembrandt, and according to an 1887 edition of the Orbis, Comenius was even "once solicited to become President of Harvard College." (Although he never came to Harvard, one can still find his name engraved on the western frieze of Teachers College at Columbia University.) Even if he is less celebrated today by name, his innovative ideas about education are still influential. In his Didactica Magna, for example, he advocates for equal educational opportunities for all: boys and girls, rich and poor, urban and rural. 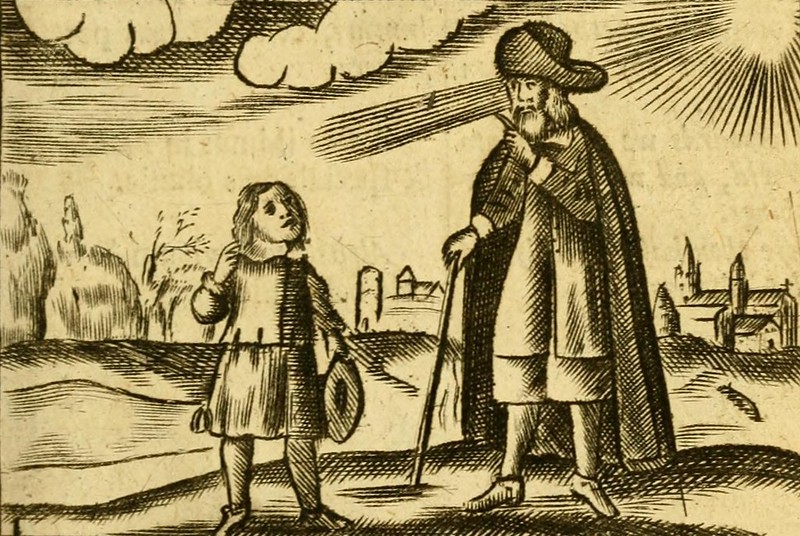 opening illustration of Master and Child, from the 1705 English edition of Orbis Sensualium Pictus - Source.

Despite his progressive aims and lasting educational influence, Comenius does not come off as a thoroughly modern schoolmaster. When we turn to the first page of the Orbis, we find an opening sentence that would seem peculiar in today's children's books: "Come, boy, learn to be wise." We see above the text a teacher and student in dialogue, the former holding up his finger and sporting a cane and large hat, the latter listening in an emotional state somewhere between awe and anxiety. The student asks, "What doth this mean, to be wise?" His teacher answers, "To understand rightly, to do rightly, and to speak out rightly all that are necessary."

The first chapter of the Orbis looks to the third of these goals in what reads like an early version of "Old MacDonald Had a Farm." Children learn how "to speak out rightly" by imitating animal noises. These two pages are a trove of Latin onomatopoetic verbs and peculiar renderings of animal sounds: cats cry out "nau nau" instead of "meow meow," and we learn that "the Duck quacketh" (anas tetrinnit), "the Hare squeaketh" (lapus vagit), and "the Crow crieth" (cornix cornicatur). This introduction to animal noises is familiar territory for modern educational toys, as any trip to Toys R' Us confirms. The teacher explains that first the student must learn "the plain sounds...which living creatures know how to make, and thy tongue knoweth how to imitate." After mastering these noises, the student and teacher "will go into the World, and we will view all things." 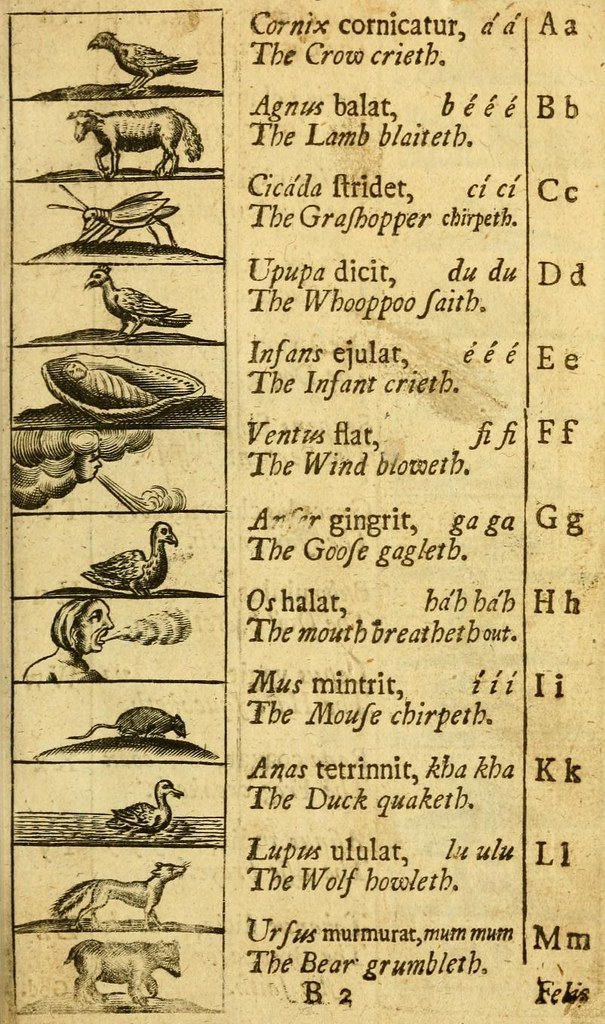 Illustration for the sounds, from the 1705 English edition of Orbis Sensualium Pictus - Source.

But after learning how to quack and how to squeak, the children do not "go into the World," and they do not actually view anything either. Instead, the Orbis abruptly shifts to the philosophical and the invisible, perhaps hoping that a firm grasp of ducks and mice is sufficient for understanding the divine. Chapter 2 presents children with a crash course in theological metaphysics, where they learn that God is "in his Essence Spiritual, and One. In his personality, Three." They learn that He is "A Light inaccessible; and yet all in all. Every where and no where." Even if the Orbis is devoted to showing the world visually, its discussion of God is abstract and opaque. And the illustration for this chapter is nothing like the bearded old man we see on the ceiling of the Sistine Chapel. It is instead a complex diagram, faceless and geometric. So much for the goal of showing "The World of Things Obvious to the Senses." 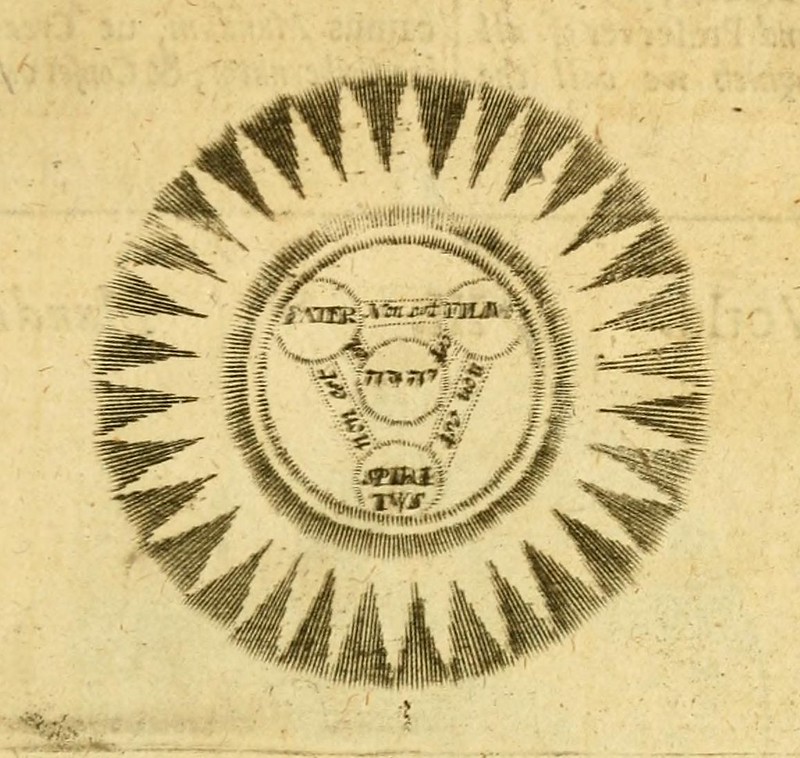 Illustration of "God", from the 1705 English edition of Orbis Sensualium Pictus - Source.

Comenius reveals the rationale for this lesson at its end, where he calls God "the Creator, so the Governor and Preserver of all things, which we call the World (Mundum)." Only after introducing God can the author describe His creations: "The World" (Mundus), "The Heaven" (Caelum), the four elements, plants, and animals. In fact, the Orbis loosely mimics the order of creation found at the beginning of Genesis. Comenius expands upon the sparse Biblical narrative with colorful examples of fauna. We learn about a staggering variety of exotic animals: there are six chapters on birds ("Water-Fowl" (Aves Aquaticae), "Ravenous Birds" (Aves Rapaces), among others) and a chapter on "Flying Vermin" (Insecta Volantia), including mentions of the "Gad-Bee" (Oestrum) and the "Glow-worm" (Cicindela). 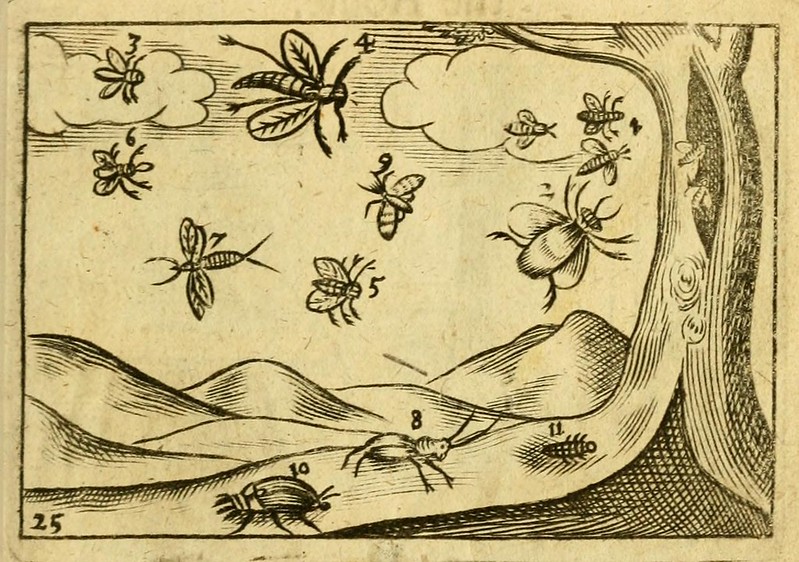 Illustration for "Flying Vermin", from the 1705 English edition of Orbis Sensualium Pictus - Source.

After thirty-five chapters on theology, elements, plants, and animals, Comenius finally introduces man. He again opts for the Biblical account and addresses Adam and Eve before more immediate topics like "The Outward Parts of a Man," where we learn that women have "two Dugs, with Nipples" and that below the stomach we find "the Groyn and the privities." The anatomical terminology is vast, including words for each finger and for a number of bones in the body. But amid instruction on the corporeal and familiar, Comenius again injects the abstract and invisible into his picture book with Chapter 43, a discussion of "The Soul of Man." A dotted outline of a human, opening his arms as if to welcome the students' gaze, stands at the top of the page. Despite this illustration, Comenius' discussion of the soul is not dumbed down for children. He lays out the categories of souls for his young students: the "Vegetative" soul of plants, the "Sensitive" soul of animals, and the "Rational" soul of man. 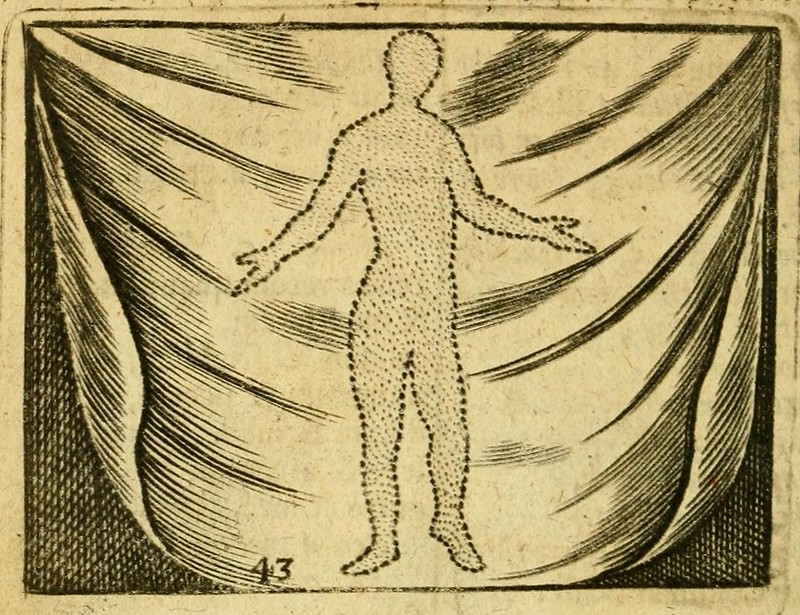 Illustration for "The Soul", from the 1705 English edition of Orbis Sensualium Pictus - Source.

Other chapters address more mundane topics. Comenius discusses deformed people ("the blubber-lipped" and "the steeple-crowned" among others) and a variety of basic commercial practices including but not limited to honey-making, beer-brewing, bread-baking, shoe-cobbling, and box-making. The later chapters of the book concentrate on the activities of learned elites, fitting for our student who has passed from the earliest stages of imitating animal noises through lessons on the human soul. Comenius includes chapters on music, philosophy, astronomy, and a number of virtues like temperance and fortitude. And a student who has progressed so far in his studies perhaps has earned a little free time, so the Orbis introduces him to tennis, dice games, and fencing. 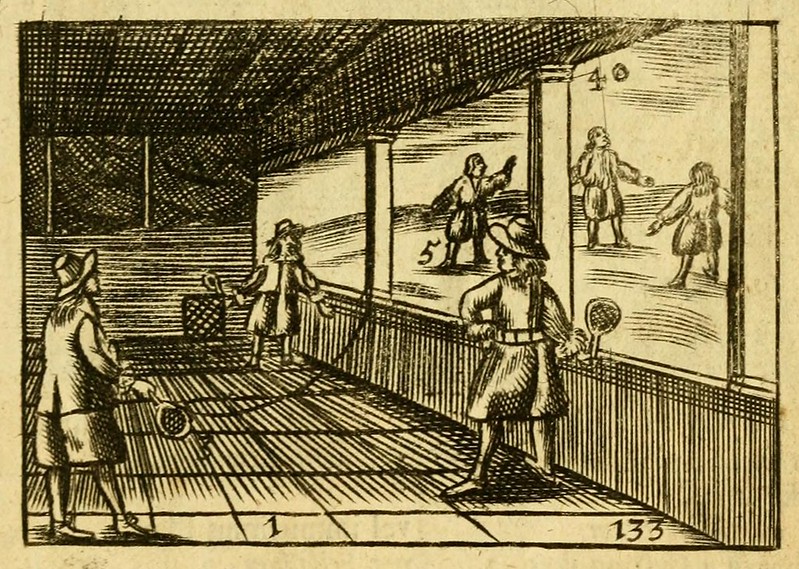 Illustration for "Tennis", from the 1705 English edition of Orbis Sensualium Pictus - Source.

To parallel his first chapter on God and the Trinity, Comenius concludes the Orbis with an extensive discussion of theology and religion, beginning in Chapter 144. Comenius' allegiances are clear: he devotes one page of text to "Gentilism," about one page to Judaism, but over two full pages to Christianity. (He also includes a half-page on "Mahometism.") Appropriately, Comenius' final topic is The Last Judgment, where "the last day...shall raise up the Dead with the sound of a Trumpet" and when "the Godly & Elect, shall enter into life eternal into the place of Bliss." It seems that as much as the student must learn how God created the world, he must also learn how God will end it. 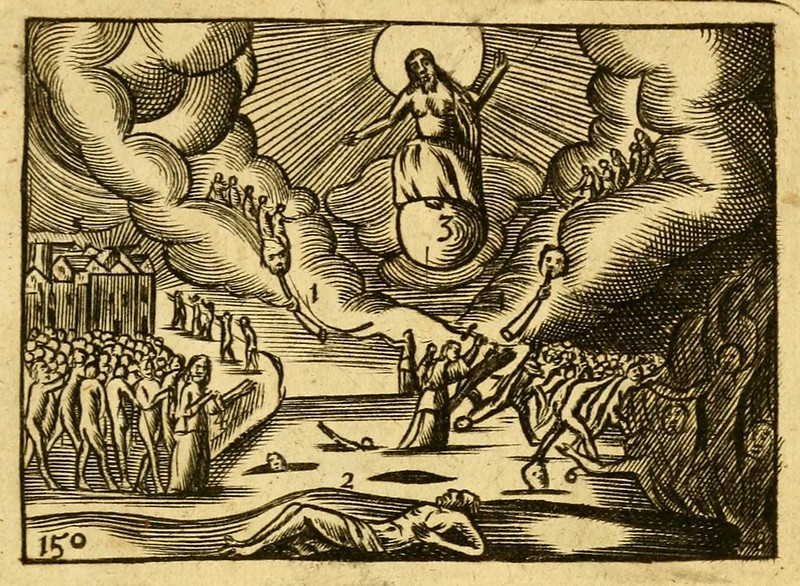 The final page, mirroring the first, again shows the teacher speaking and the young student listening attentively. But in his second appearance, the student says nothing: we might say Comenius' lesson was not a matter of dialogue and discussion but of assiduous memorization. The teacher, too, seems to have changed his approach. He tells the student, "thou hast seen in short, all things that can be shewed," but he recommends that the student also "read other good Books diligently" so that he may become "learned, wise, and godly."

Perhaps, then, Comenius' project was a clever ruse all along. Recognizing that his students would never learn theology from looking at trees and birds, he wrote the Orbis, his own "good Book" where children could learn their metaphysics and Biblical basics. Even if the first page of the book urges the student to become "wise" and promises to "shew thee all," the final page concedes that such wisdom does not come from mere sights and sounds. Comenius, in fact, finishes the book with an admonition not to go out into the world at all. A student should instead learn to "fear God, and call upon him, that he may bestow upon thee the Spirit of Wisdom."

Charles McNamara is a PhD candidate in the Department of Classics at Columbia University. His main research traces the history of certainty, both in its ancient origins and in its early modern applications to the legal thought. In addition to his work at Columbia, he also teaches in Rome with the Paideia Institute, a non-profit educational organization dedicated to promoting the study and appreciation of the classical humanities. More information can be found at his website: http://charlesmcnamara.com