BJP President Rajnath Singh: "This is a people's victory"

Votes counted so far suggest the BJP is on course for the most resounding victory by any party for 30 years, trouncing the outgoing Congress Party.

After a decade of rule by Congress, the BJP is expected to steer India sharply to the right.

The new prime minister will be Narendra Modi, chief minister of the western state of Gujarat, who is seen as a no-nonsense, can-do leader who stands for development and muscular nationalism, says the BBC's Soutik Biswas.

He campaigned on promises he would revive the country's slowing economic growth.

But many Indians still have profound concerns over Mr Modi because of claims he did little to stop the 2002 communal riots in Gujarat, in which at least 1,000 people died, most of them Muslims – allegations he has always denied and over which he was never charged.

The election result will be a crushing blow to the Congress party, which is led by the Nehru-Gandhi family and has dominated Indian politics since independence.

It reflects voter anger with Congress, which has been mired in serious corruption scandals and whose leadership has been considered ineffective in recent years, analysts say.

The 63-year-old Mr Modi celebrated with a visit to his elderly mother in Gandhinagar, the state capital of Gujarat, after tweeting: "India has won. Good times ahead."

Latest election results showed the BJP is on course to win 279 seats, surpassing the 272 seats needed to secure a majority in the lower house of parliament.

With their allies, the party could achieve more than 300 seats. 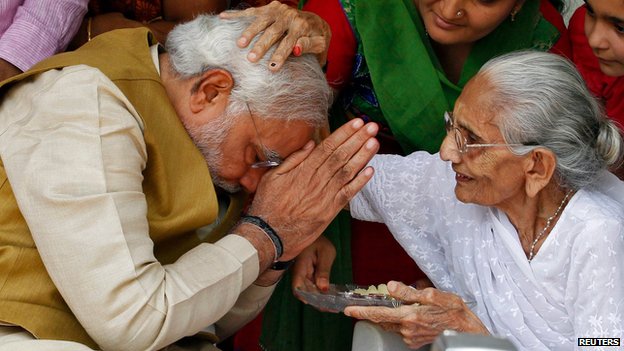 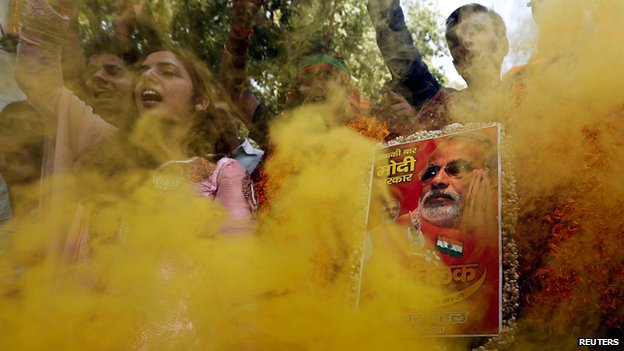 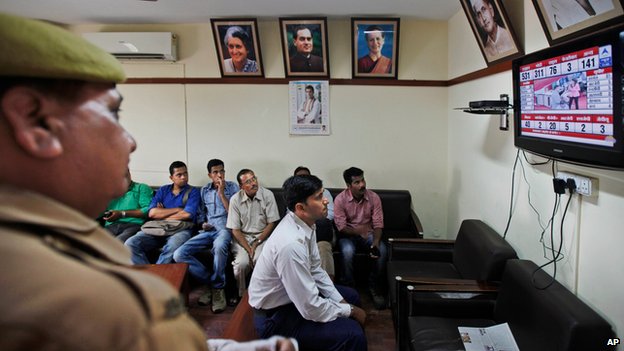 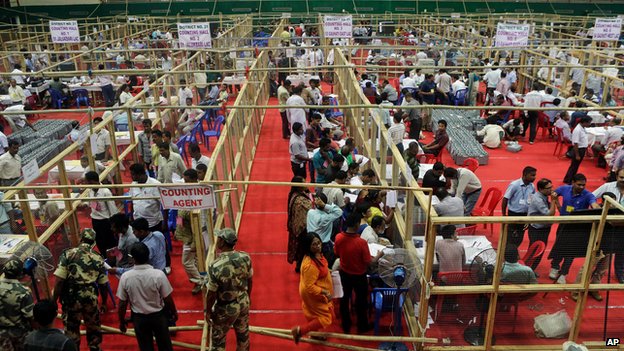 More than 500 million votes are being counted, with the official results expected later on Friday

"The people of this country have given us a great responsibility," said BJP president Rajnath Singh at a news conference.

He said the resounding victory proved the BJP had "crossed the geographical, political and social boundaries" in its appeal to voters.

Meanwhile, the Congress party – which has been in power for the past decade – is leading in fewer than 50 seats.

The scene at the BJP headquarters resembles a carnival.

The entire building is decorated with the party flag; there are giant posters of Narendra Modi and large TV screens displaying the vote count.

Brass bands struck up patriotic tunes, party supporters are dancing in the street and firecrackers are going off at a frenetic pace.

There is also unprecedented security, with hundreds of policemen and the entire road closed to traffic.

Accepting defeat, the Congress Party spokesman, Shakil Ahmed, said: "We are accepting the people's verdict in all humility.

"Trends of the counting are certainly not in our favour. The trends point out that the country has decided to vote against us," he was quoted by news agency AP as saying.

Even before the Congress party's announcement, there were scenes of jubilation outside the BJP's headquarters in Delhi. Firecrackers exploded and people handed out sweets.

The mood was much more sombre at the Congress party's headquarters.

More than 500 million people voted in what is the world's biggest exercise in democracy.

Voter turnout in the mammoth nine-phase general election was a record 66.38%, beating the previous 1984 poll record.

Divya Arya reports: "All indications point towards a very bad show for the Congress"