BROWNSVILLE, Tex. — For more than a year, the old Walmart along the Mexican border here has been a mystery to those driving by on the highway. In place of the supercenter's trademark logo hangs a curious sign: "Casa Padre."

But behind the sliding doors is a bustling city unto itself, equipped with classrooms, recreation centers and medical examination rooms. Casa Padre now houses more than 1,400 immigrant boys, dozens of them forcibly separated from their parents at the border by a new Trump administration "zero-tolerance" policy.

On Wednesday, for the first time since that policy was announced, and amid intense national interest after a U.S. senator was turned away, federal authorities allowed a small group of reporters to tour the secretive shelter, the largest of its kind in the nation.

Inside, in what used to be a McDonald's, shelter employees served scores of mostly teenage boys chicken, vegetables and plastic fruit cups. In the former loading docks, children watched the animated movie "Moana," dubbed in Spanish. Where once there was a garage, six young people played basketball.

"They used to do oil changes in here," said Martin Hinojosa, director of compliance for Southwest Key Programs, the nonprofit that runs Casa Padre under a federal contract. 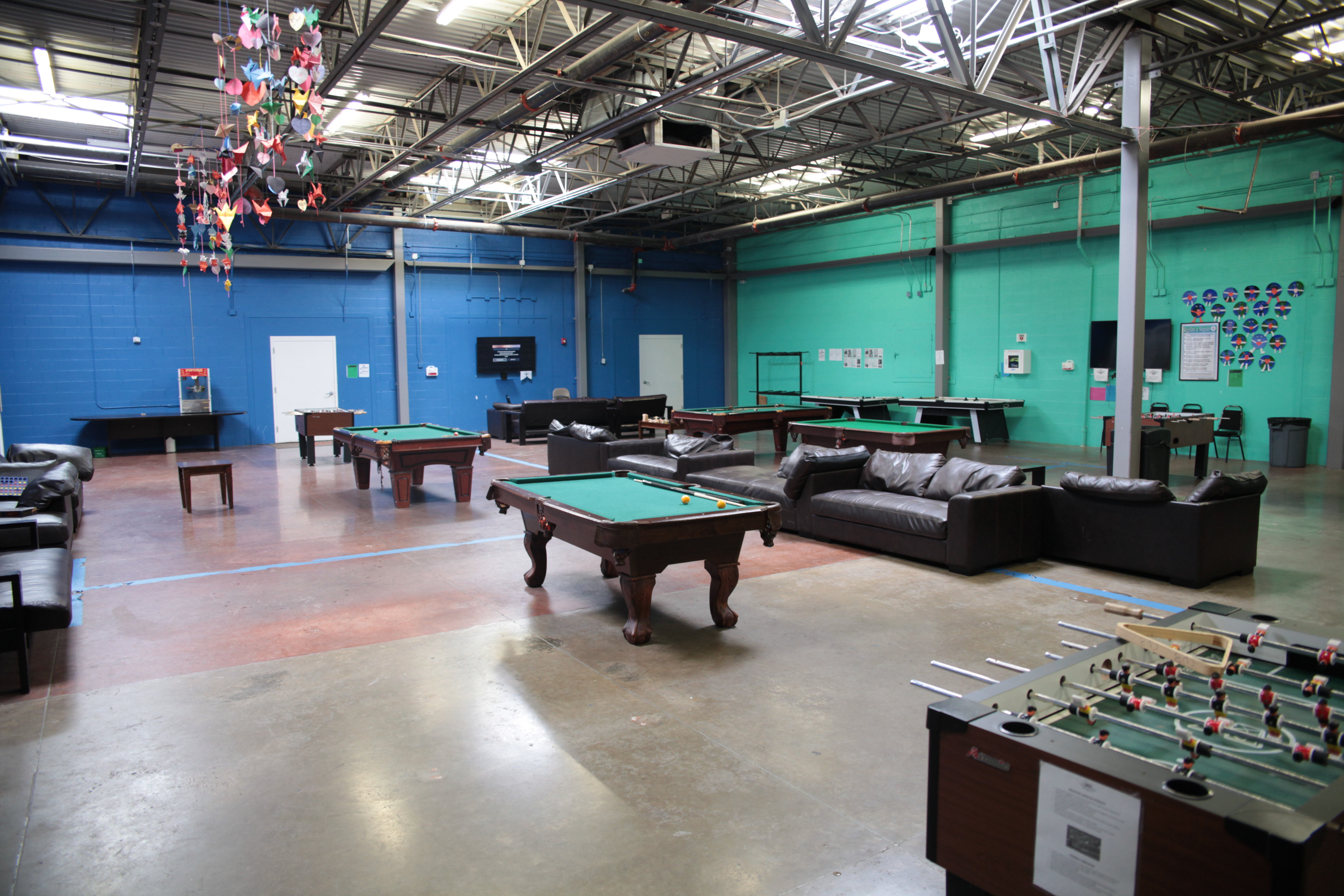 Children can play pool and foosball in a rec room at Casa Padre. (U.S. Department of Health and Human Services)

Texas-based Southwest Key has grown quickly in recent years, fueled by surges of young Central Americans seeking refuge in the north. The organization now houses 5,129 immigrant children in three states — approaching half the approximately 11,200 currently in federal custody — in facilities that are being strained to capacity, according to Juan Sanchez, the founder and chief executive.

The policy of criminally prosecuting all who cross the border illegally is creating a new category of residents at these holding centers, young boys and girls who are grappling with the trauma of being unexpectedly separated from their mothers and fathers. To accommodate them, Sanchez said, Southwest Key is retrofitting some facilities with smaller bathrooms, smaller sinks, smaller everything.

"We're trying to do the best that we can taking care of these children. Our goal ultimately is to reunite kids with their families," he said. "We're not a detention center. ... What we operate are shelters that take care of kids. It's a big, big difference."

He estimated that 10 percent of residents at Southwest Key facilities are children who were separated from their families. At Casa Padre, which is licensed to house only older children, ages 10 to 17, the proportion is closer to 5 percent, he said.

Advocates worry that Casa Padre doesn't have the number of employees or the experience to help children in such difficult circumstances, as opposed to the larger population of immigrants who crossed the border as unaccompanied minors.

Each day, the federal government sends Casa Padre a list of children detained at the border to be placed in the shelter, said Jaime Garcia, program director for Southwest Key. They arrive in white vans, half a dozen at a time. After they are fed, clothed and showered, the boys spend up to 72 hours in "intake" as they are vaccinated and checked for tuberculosis, sexually transmitted disease and other maladies. 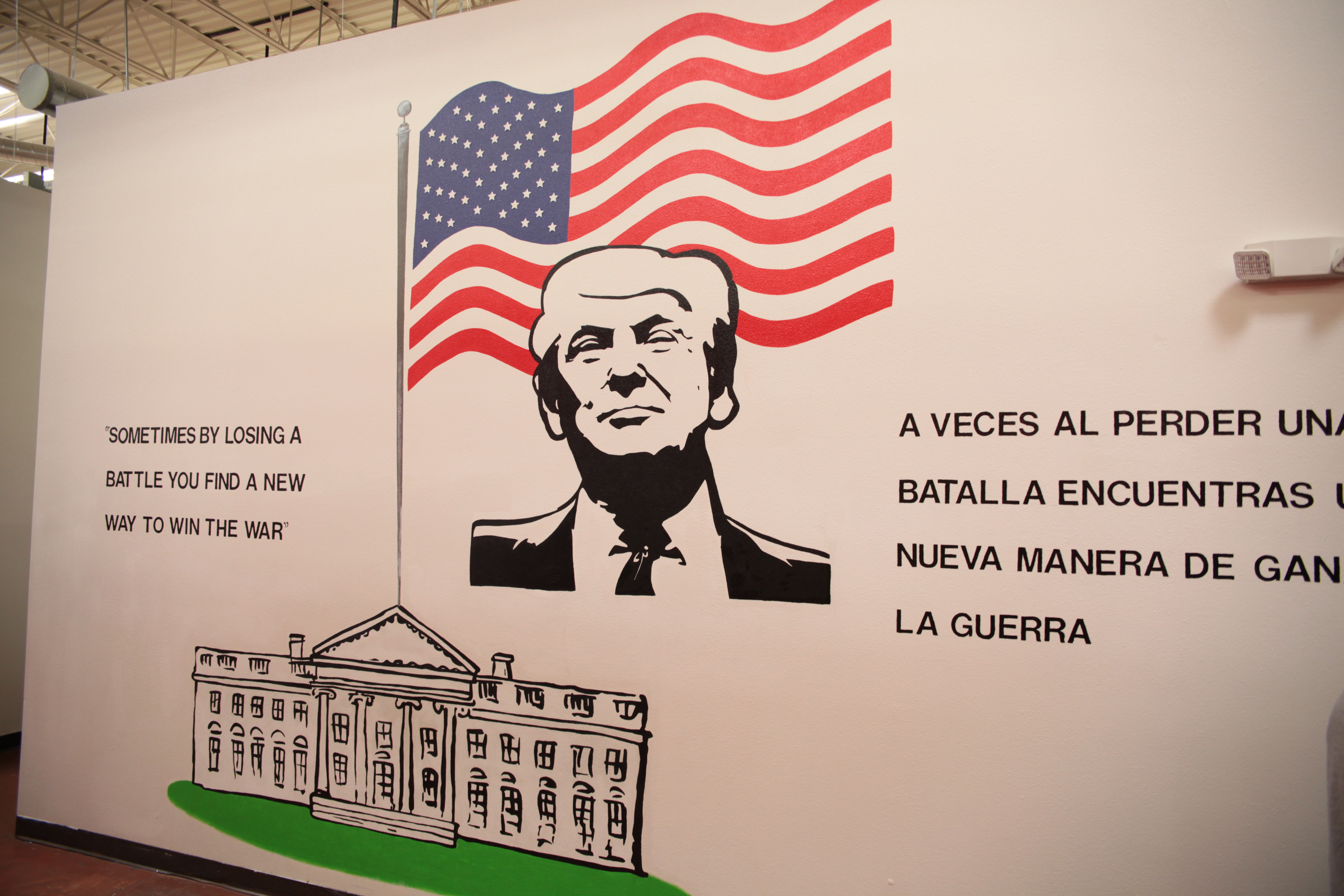 A mural of President Trump, the first in a series of presidential murals a visitor encounters, features a quote from a tweet he posted in 2014. (U.S. Department of Health and Human Services) 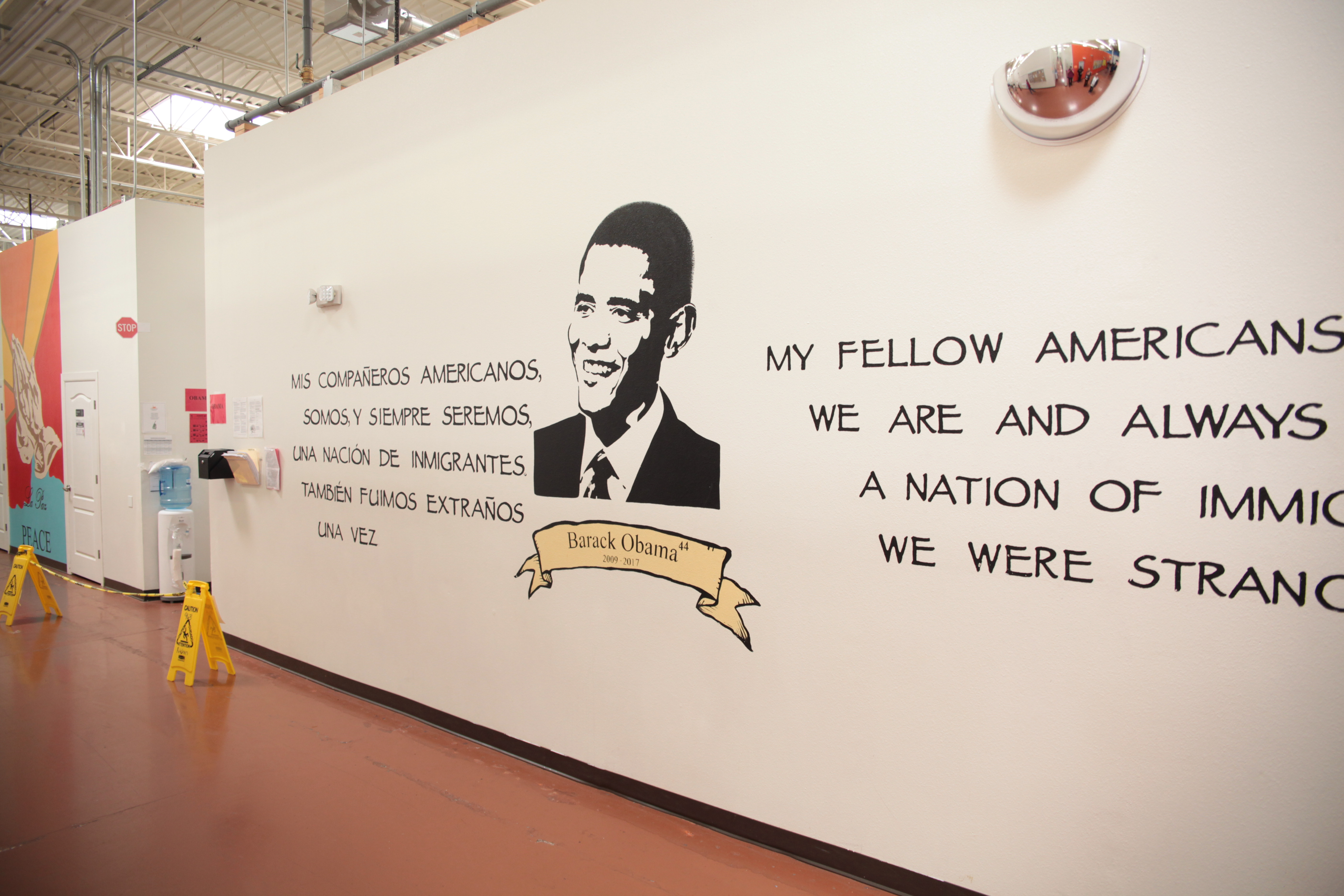 The mural of former president Barack Obama features a line from a speech in which he announced protections for some undocumented immigrants. (U.S. Department of Health and Human Services)

Once they are medically cleared, they join the throng of boys in the shelter, where they stay for an average of 49 days, according to Southwest Key officials. The number of children at Casa Padre is constantly rising: On Wednesday, it was 1,469.

They line up in hallways featuring murals of U.S. presidents and inspirational quotes. Donald Trump's image is the first a visitor encounters, drawn in black and white against the backdrop of an American flag. "Sometimes by losing a battle you find a new way to win the war," read the quote, a line he tweeted two years before becoming president.

There is also a mural of former president Barack Obama. "My fellow Americans, we are and always will be a nation of immigrants. We were strangers once, too," reads Obama's quote, taken from a 2014 speech in which he announced protections for some undocumented immigrants.

The bedrooms at Casa Padre are doorless, with walls reaching only halfway to a 20-foot-high industrial ceiling that serves as a constant reminder of the building's past.

It used to be four beds to a room. But as the shelter fills to capacity, a fifth bed — a cot — has been added to each. Atop one boy's pillow lay a teddy bear, a bow around its neck and a smile on its upward turned face.

Yellow lines on the ground mark the area boys must line up. In the cafeteria, a mural tells kids to speak quietly, ask before getting up and not share food. Next to their beds are lists of each boy's belongings: two T-shirts, three pairs of socks, three pairs of underwear, one polo, a pair of jeans. Lights go out at 9 p.m. and come back on at 6 a.m.

There are so many children that they attend school in two shifts: one in the morning, the other in the afternoon. They sit in small, numbered classrooms with yellow walls covered in posters of planets. On Wednesday, through tiny windows they waved to the reporters outside.

"You might want to smile," Southwest Key executive Alexia Rodriguez told the journalists at one point. "The kids feel a little like animals in a cage, being looked at."

They spend two hours outside each day, including one hour of physical exercise and one hour of free time, which many kids spend playing on dusty soccer fields, Southwest Key officials said.

The boys are allowed to make two phone calls a week. Southwest Key officials said it sometimes takes days — or weeks — for children to reach their parents.

The unusually high number of unaccompanied immigrant children crossing the southern border in recent years has been good for Southwest Key's business. The organization has received more than $1.1 billion to shelter unaccompanied minors since 2014, including $310 million in the current fiscal year, federal spending records show. 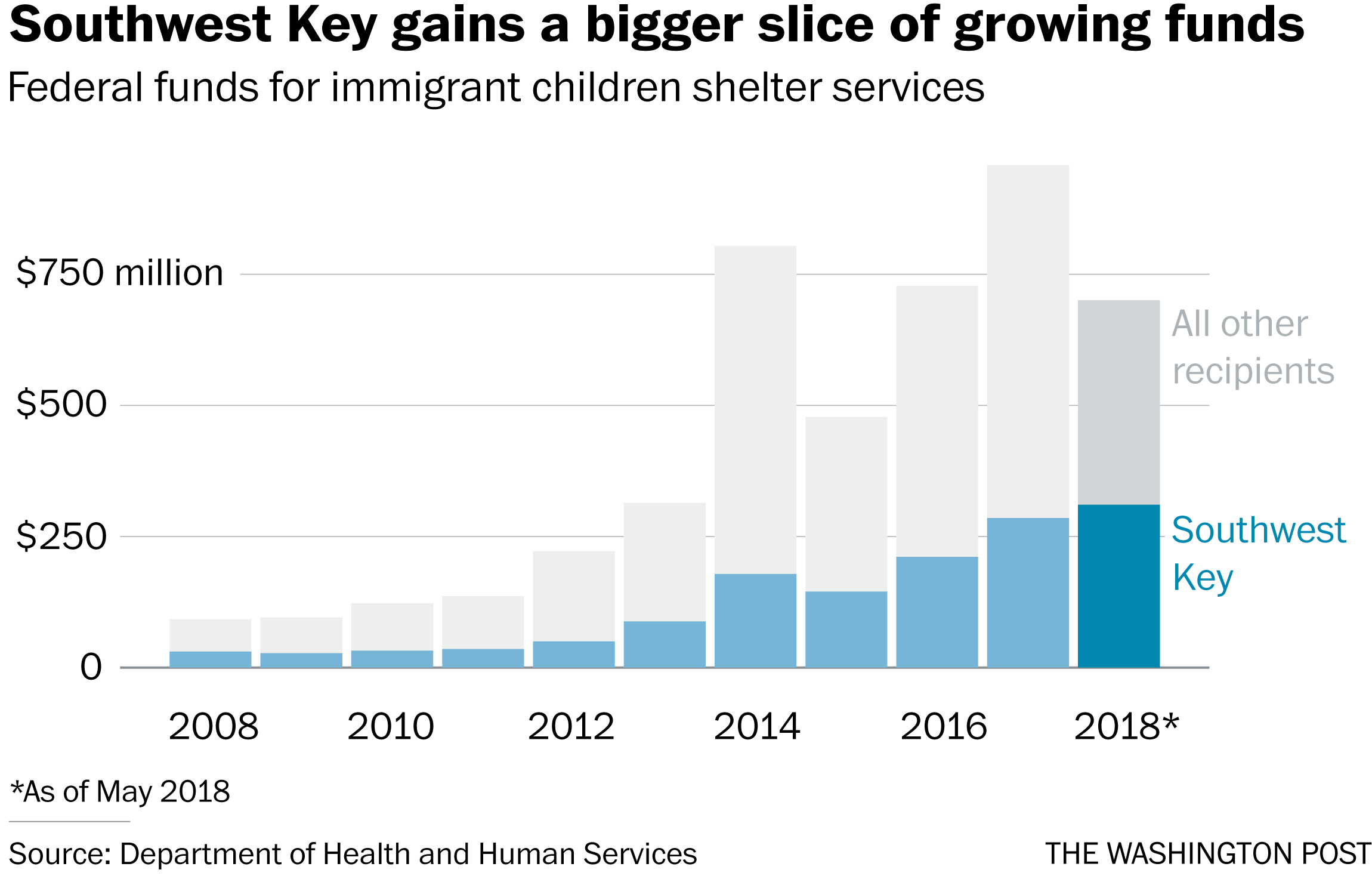 Business briefly slumped a year ago, when the spring surge of unaccompanied teen immigrants failed to materialize. Southwest Key laid off nearly 1,000 employees, according to media reports at the time.

But the flood of teens soon resumed, and then the Trump administration began separating families, shunting adults into jails and their children into shelters. The number of children in federal custody spiked by more than 20 percent between April and May of this year. Casa Padre doubled its population over that period, from 542 to 1006, according to a monthly census by the Texas Health and Human Services Commission, the agency that licenses such shelters. 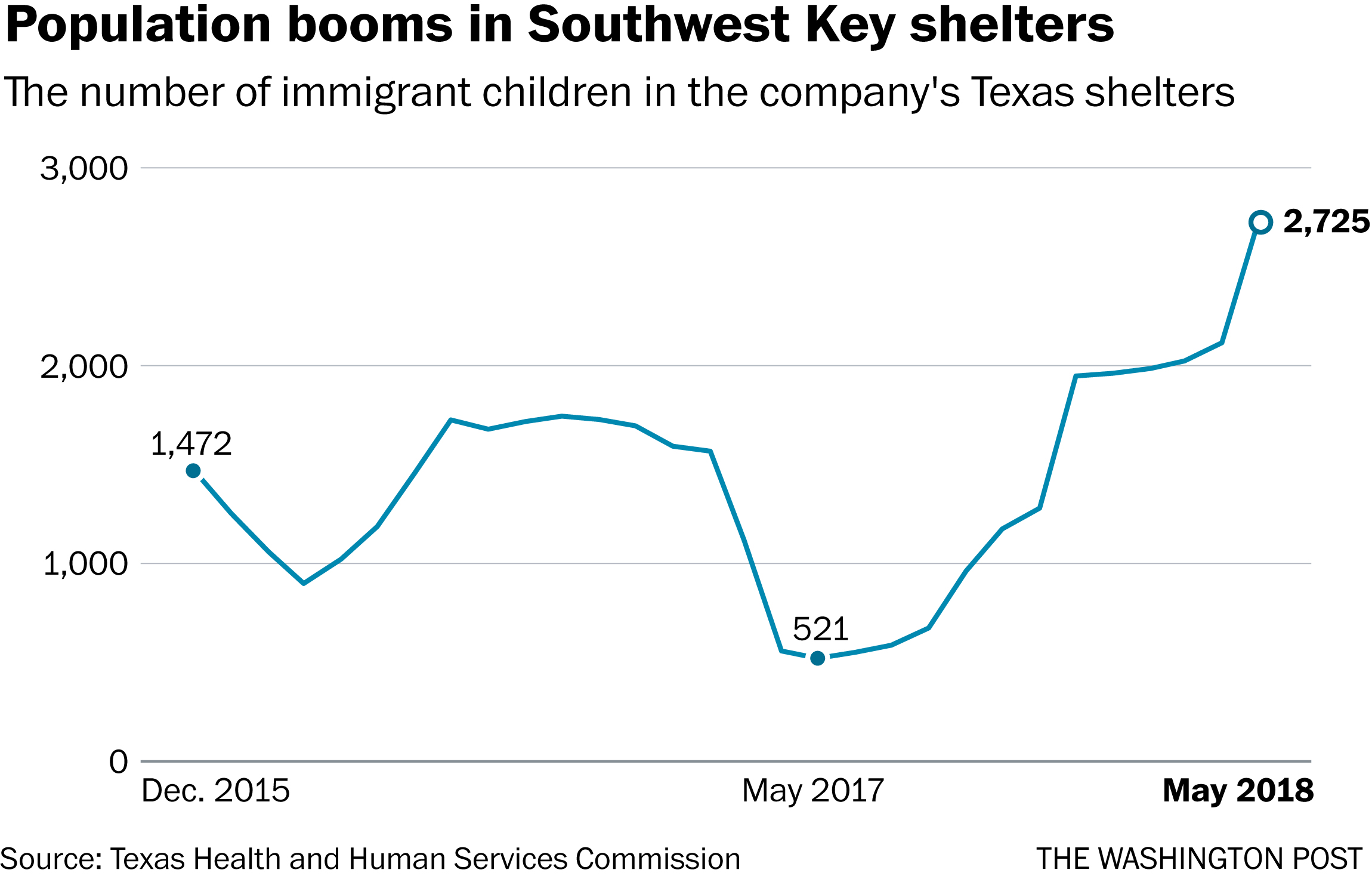 As of late May, the agency permitted Casa Padre to house 1,186 people. By the beginning of this week, it had granted the shelter permission to house 1,483. On Tuesday, the agency agreed to allow up to 1,514, a spokesman said.

So, just one year after the mass layoff, Southwest Key is racing to keep up with a new boom. The organization has hired about 700 employees in the past two weeks, and is aiming to hire another 150 as soon as possible, Sanchez said. More than 200 jobs are available at Casa Padre alone, according to Southwest Key's website.

Sanchez, a native of Brownsville, founded Southwest Key in 1987 with a focus on juvenile justice programs. In the late 1990s, he said, the organization won a federal contract to operate a shelter at the border for immigrants, many fleeing El Salvador.

Now, two decades later, Southwest Key operates 26 shelters for immigrant youth in Texas, Arizona and California. The growth has been accompanied by increased compensation for executives.

Sanchez said the change reflected a retirement contribution rather than a salary increase — recognition of previous years spent working for a low salary and no benefits.

"We had nothing," he said of the early years at Southwest Key. "No benefits, no 401(k), no insurance. We just go out there keeping kids out of prisons and jails."

His wife, Jennifer Sanchez, is a vice president of the organization. Her compensation totaled $280,819 in 2015, IRS filings show.

Federal officials declined a request to interview children and employees at Casa Padre. But a Washington Post reporter recently interviewed a teenager who spent about three months in Casa Padre, from February until early May of this year.

Jairom, 17, had fled an abusive home in Honduras and traveled through Mexico for a month, mostly by train, before he was detained crossing the Rio Grande. His family asked that only his first name be used.

Casa Padre wasn't perfect, he said. The two dirt soccer fields behind the big-box store weren't enough space for all the boys who wanted to play. And the food was terrible.

"They gave us a bit of bread, a nasty egg and some beans and an apple and some milk," he said, describing breakfast. "Everyone complained about the food."

But after a month sleeping in the open and surviving on coconuts, it was a relief to have three meals a day and a mattress of his own.