On the Model 3 body line on a Tuesday afternoon in early June, everything is still. Tesla Inc. is just coming off a week of downtime during which workers added a new production line, improved ventilation after a fire in the paint shop, and overhauled machines across the factory. But even after the changes, there are kinks to work out.

Suddenly, dozens of robots snap into frenzied action, picking up door panels, welding window pillars, taking measurements, and on and on. This robotic dance is a visceral representation of what Tesla chief executive Elon Musk has dubbed "Alien Dreadnought," a code name for the factory that evokes an early 20th century warship, but with extraterrestrials.

The stakes couldn't be higher for Tesla, which is sprinting to produce the Model 3 in quantities great enough to turn a profit. But so far, the plant's choreography has been choppy. The flow at the factory in Fremont, California, is constantly interrupted while robots and humans are trained, retrained, or swapped out. If Tesla can't make this dance work, it will be remembered as a lesson in the dangers of irrational exuberance for automation. Success, on the other hand, could transform the car industry. 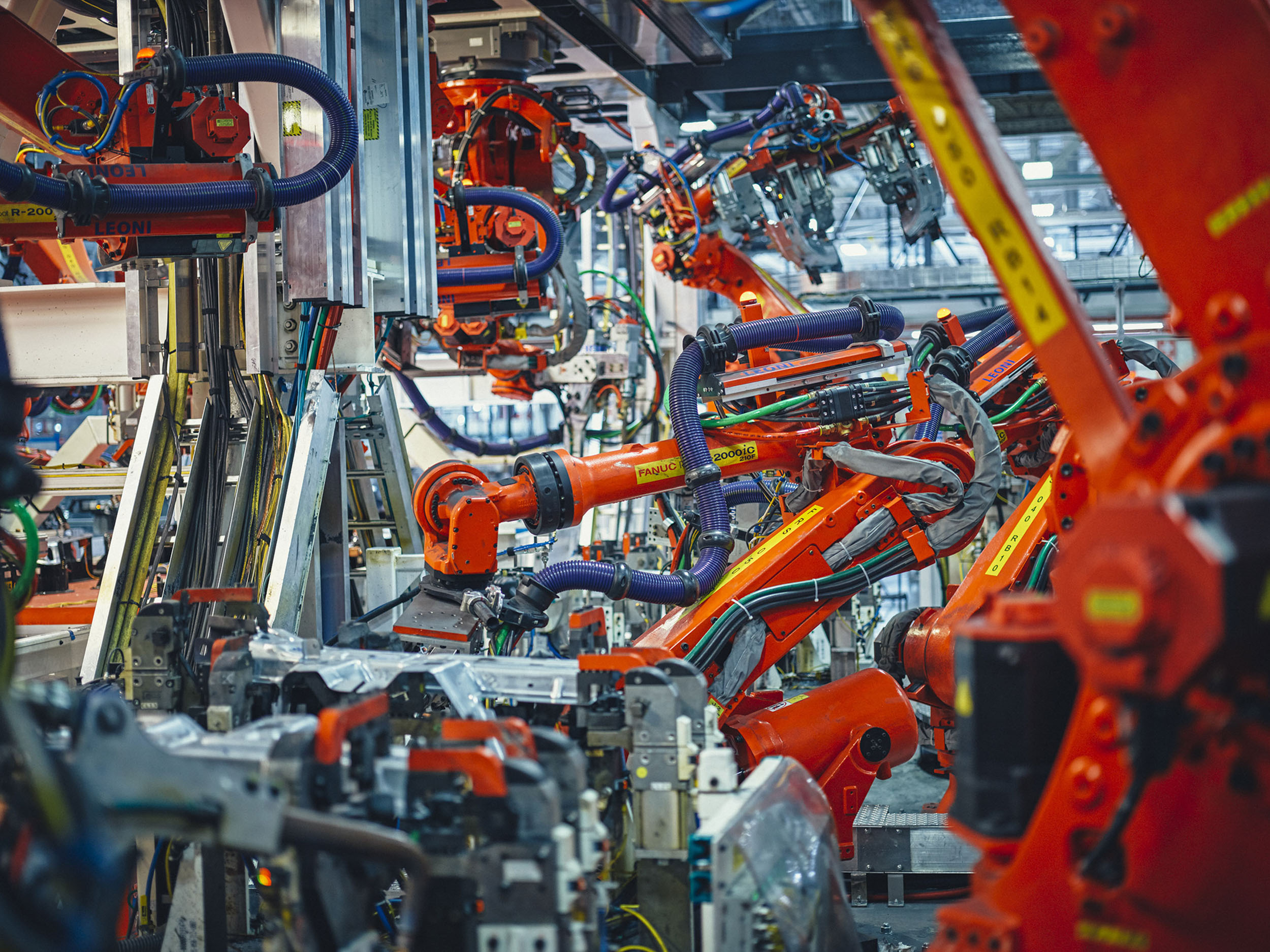 Tesla has consistently missed its production targets since deliveries of the Model 3 began last July. The first major snag was at Tesla's Gigafactory in Reno, Nevada, where software defects caused robots to fail, meaning that thousands of cells had to be pieced together by hand. Production has steadily improved since then, and Musk told shareholders on Tuesday that the company is on track to meet its goal of 5,000 cars a week by the end of June.

Tesla says there isn't any single problem slowing production down now. Instead, the heavy reliance on automation and new production methods have created a galaxy of smaller problems that must each be addressed individually. Musk's claim is that once the process is tuned, the company will set a new standard for speed, precision, and scalability in manufacturing. 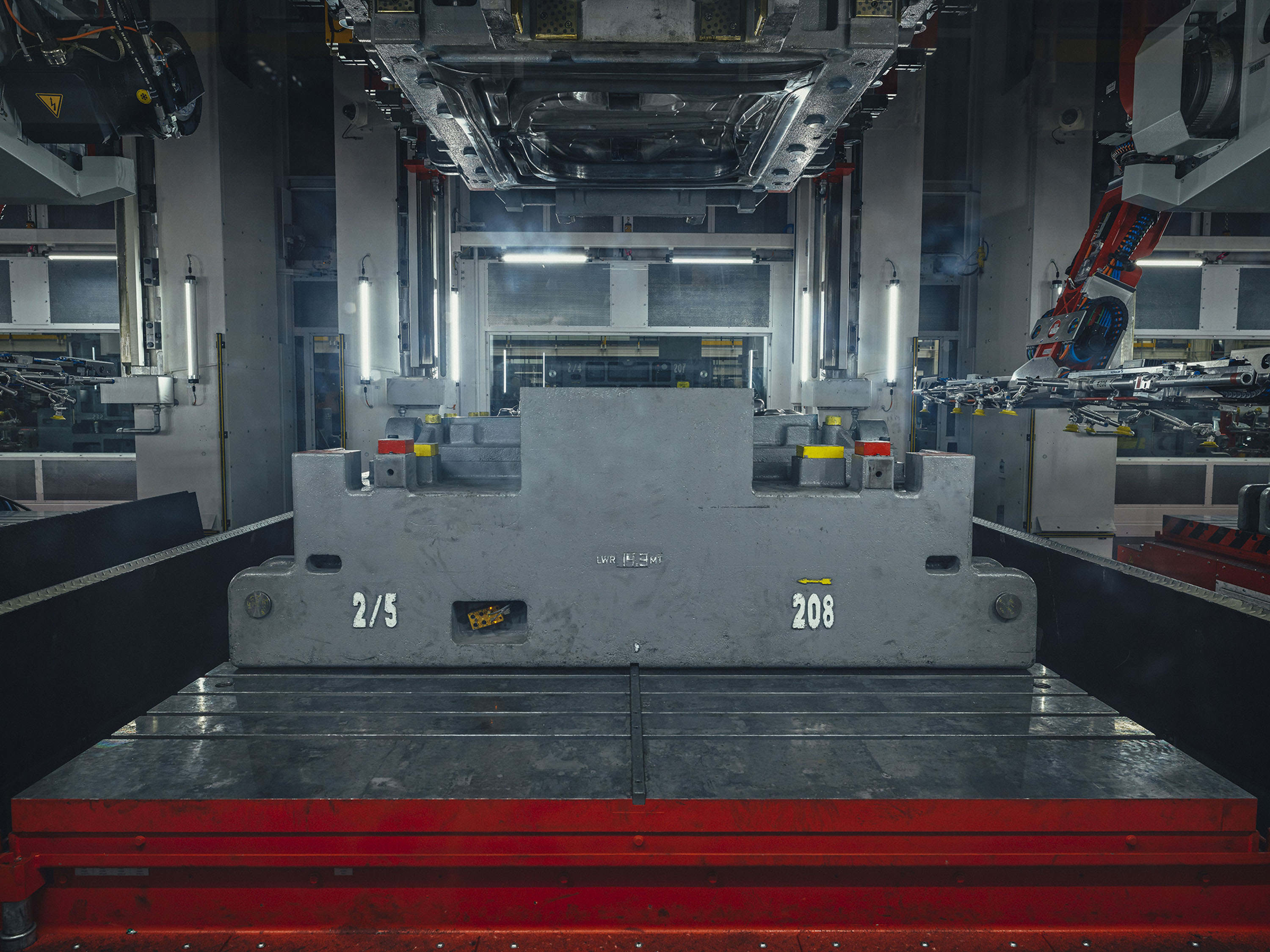 Tesla gets a stamping upgrade.

Stamping Tesla uses a high-end Schuler servo stamping press to turn giant rolls of steel into Model 3 body parts. There are only 35 such presses in auto manufacturing worldwide, and Tesla says it is the first in the U.S. The equipment has allowed Tesla to crank out unique parts, like the Model 3 front fender, which engineers say has greater depth in a single piece of stamped steel than any other fender in production.

Stamping was a production bottleneck on Tesla's previous two cars—the Model S sedan and Model X SUV—and Musk didn't want a repeat. The high-volume servo press is a manufacturing splurge—one of many that Tesla hopes to recoup through high volumes and flexibility for its designers. 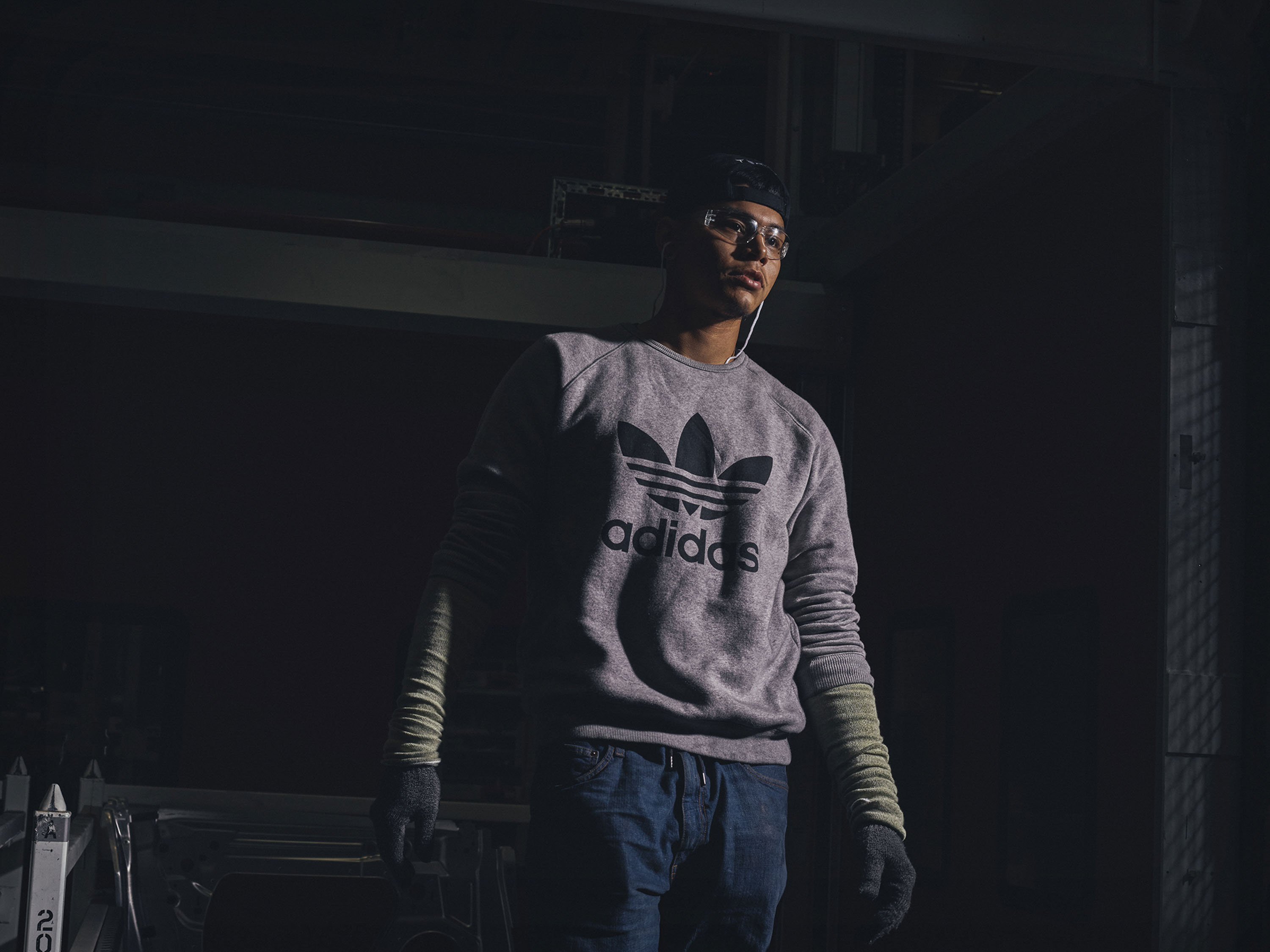 Adrian Bernmudez is a production associate in Model 3 stamping. 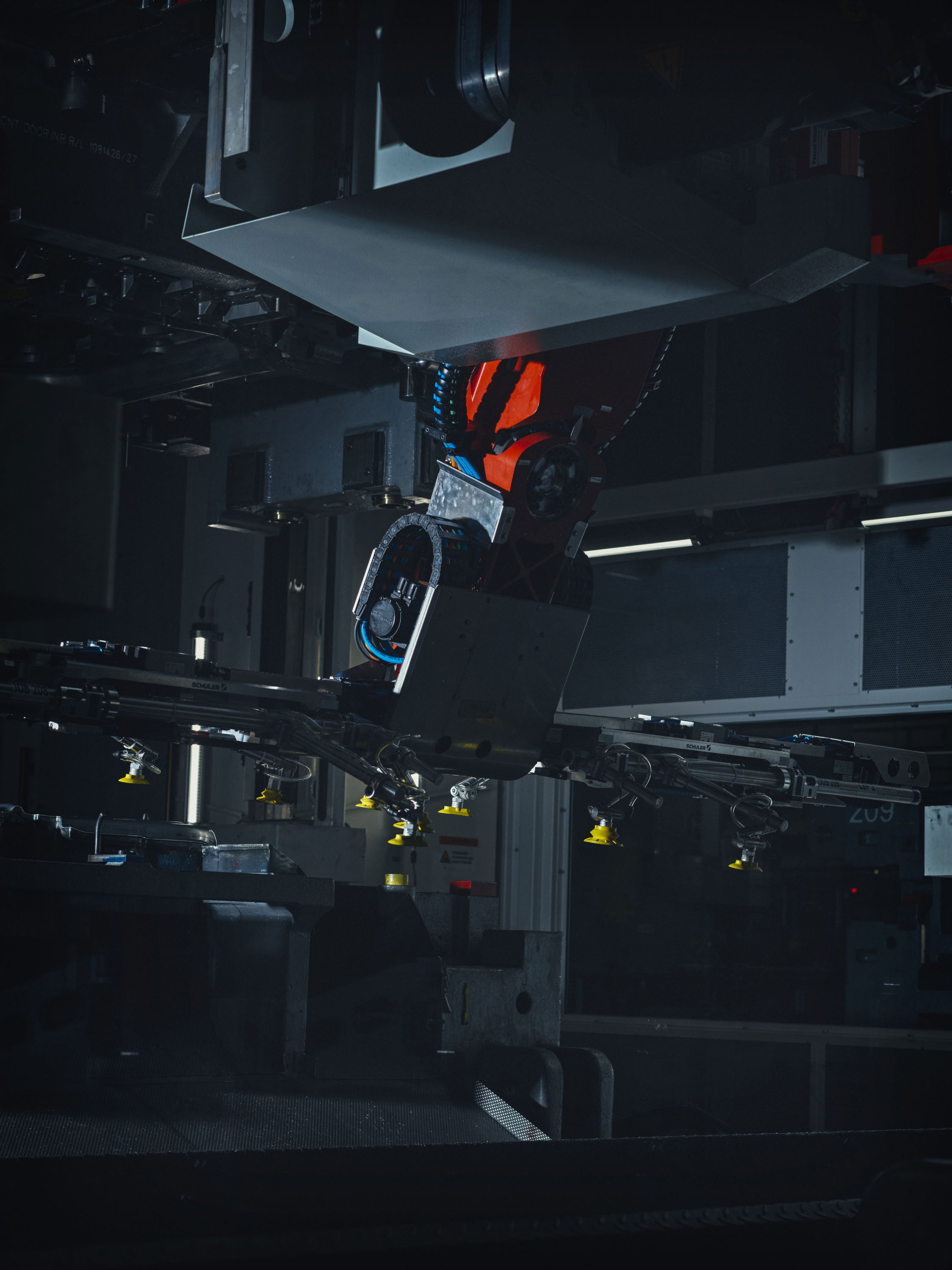 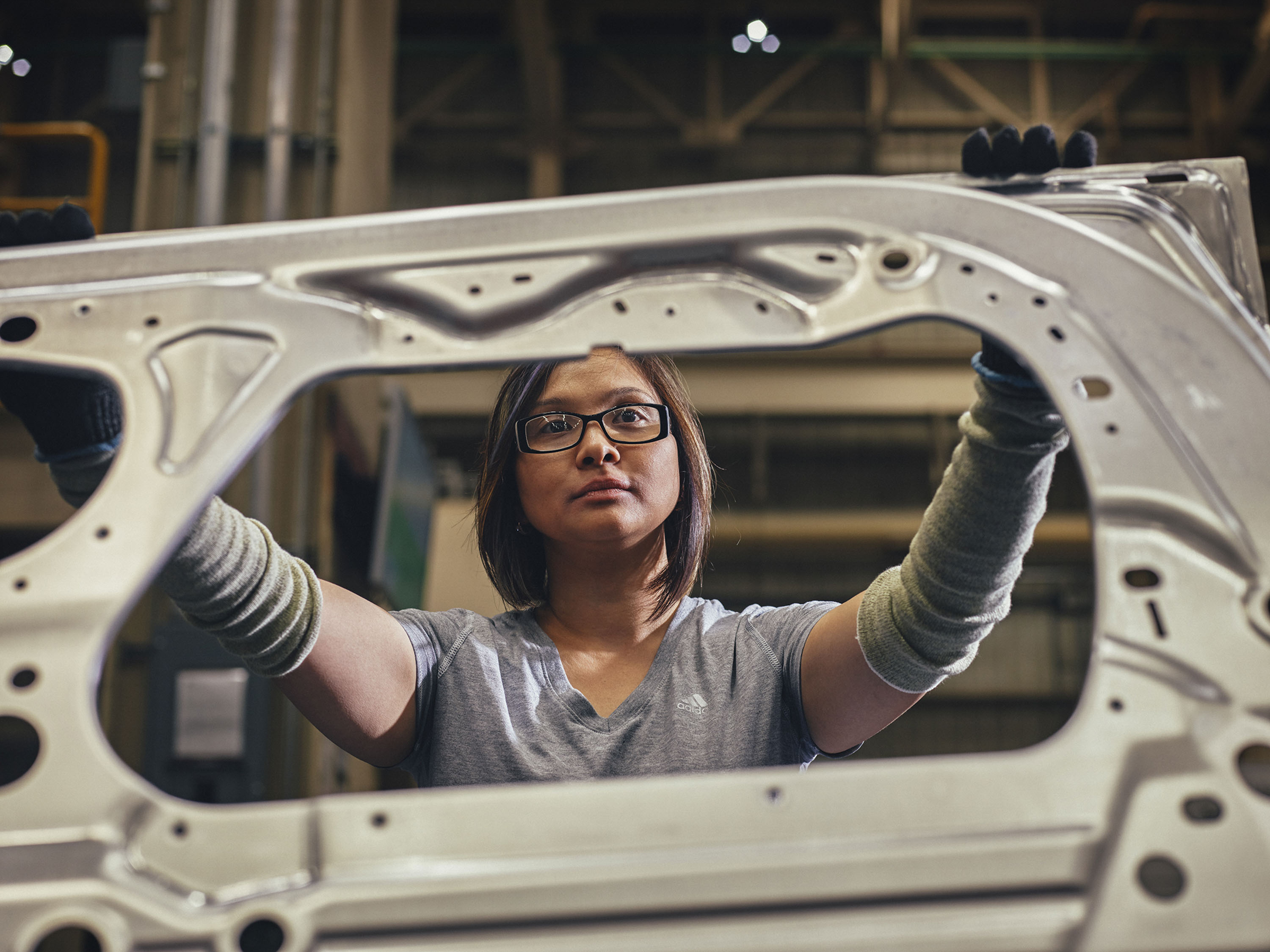 Assembly Putting together the pieces of the car's body is an area that all automakers automate to varying degrees. However even state-of-the-art factories tend to rely on people to transport parts and load them onto the machines. Car parts are packed together for storage and shipping, and picking them back up is difficult without human fingers.

This is one area that Tesla may have gone too far, too fast. In April, Musk acknowledged that he had to rip out a complex conveyor system for parts and replace it with workers. Various robots throughout the line met a similar fate or had to be reprogrammed. Even so, Tesla says the Model 3 body line is now 95 percent automated, including the transfer, loading, and welding of parts. 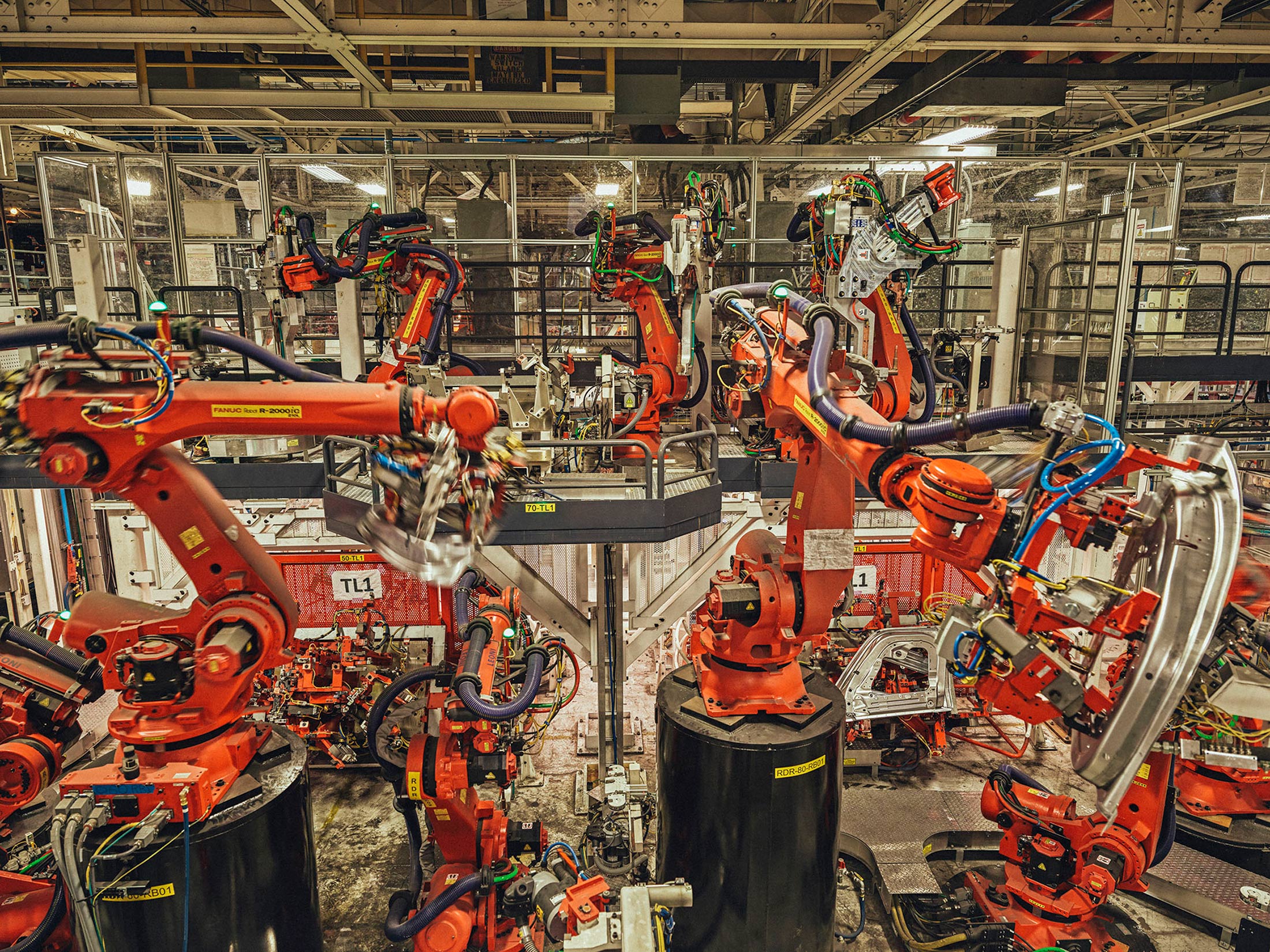 Glass walls keep humans away from the action. 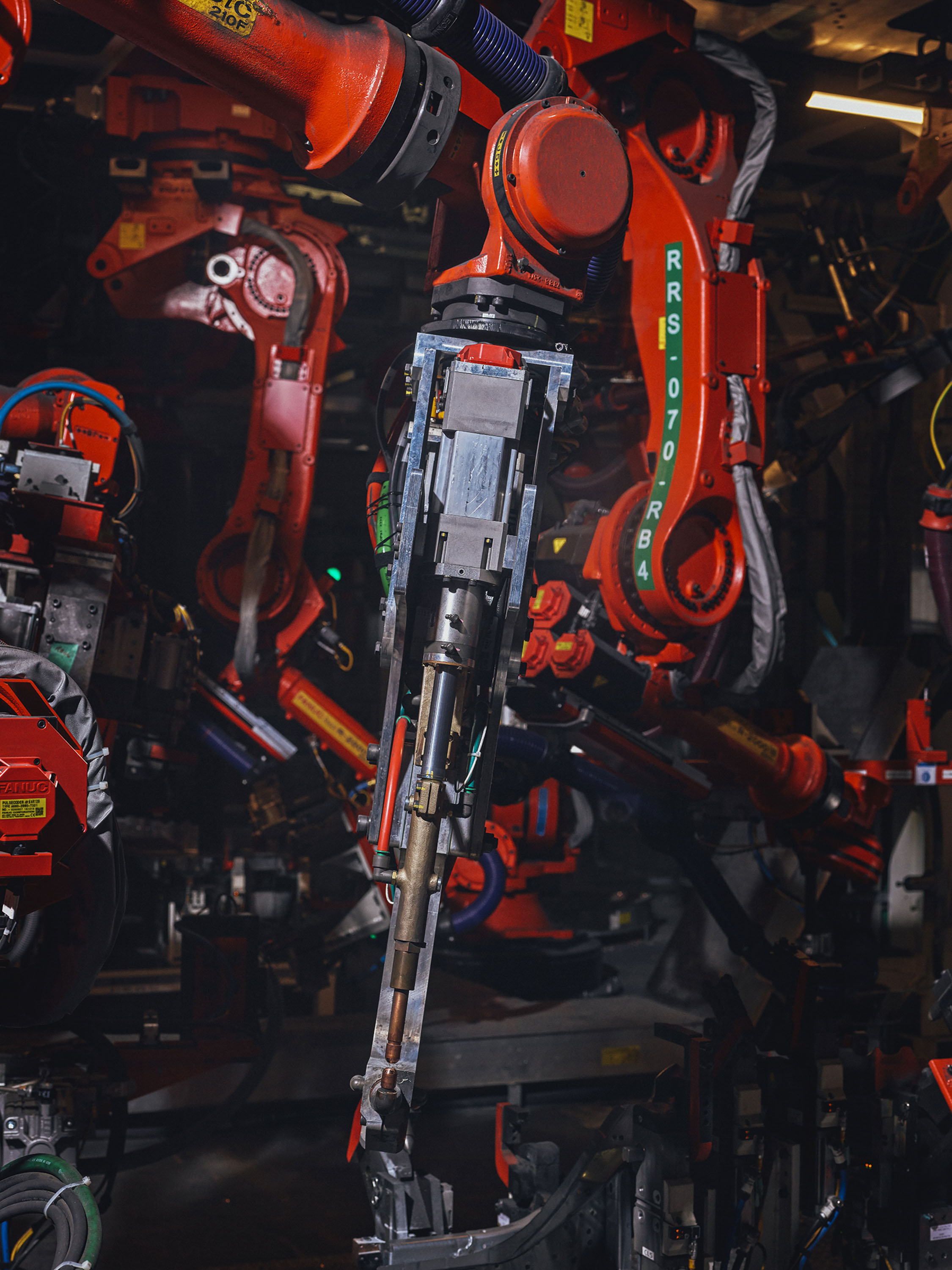 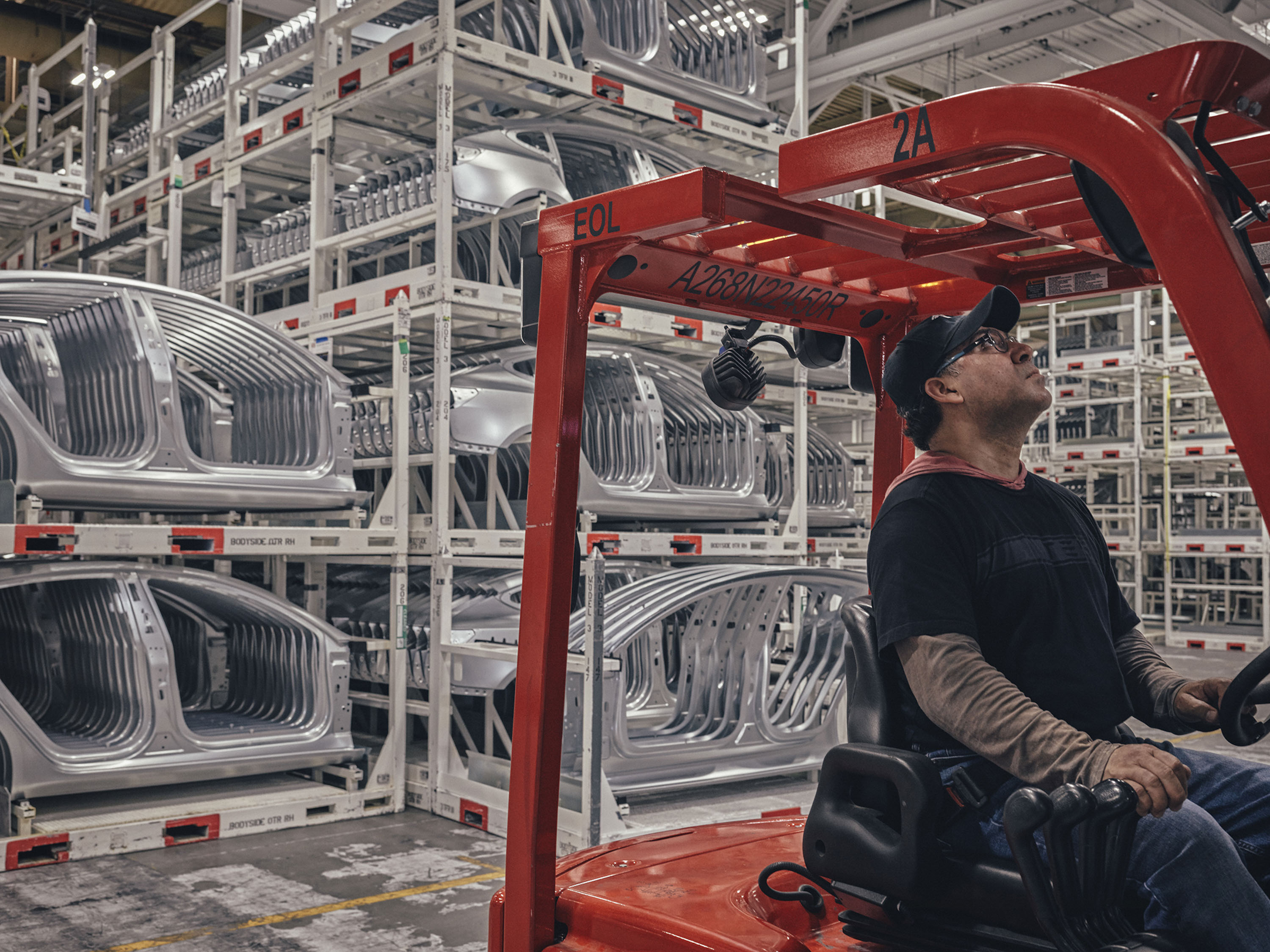 Seat Factory Car manufacturers hate seats. They're tedious to make and require different skills and materials than the rest of the car. It's easier to outsource, and no major manufacturer does it all themselves. But relying on suppliers got Tesla into trouble with the Model X, when its engineers designed an extremely difficult-to-make "monopost" seat and an impossible-to-hit timeline. Problems with suppliers set production back by months, and Musk decided he wasn't going to put up with it again.

In just a few years, Tesla built its own seat factory to handle all of its seat production. These are the first images published from the new factory, which Tesla says already has more capacity than it needs for its 2018 production goals—with plenty of space for additional expansion. 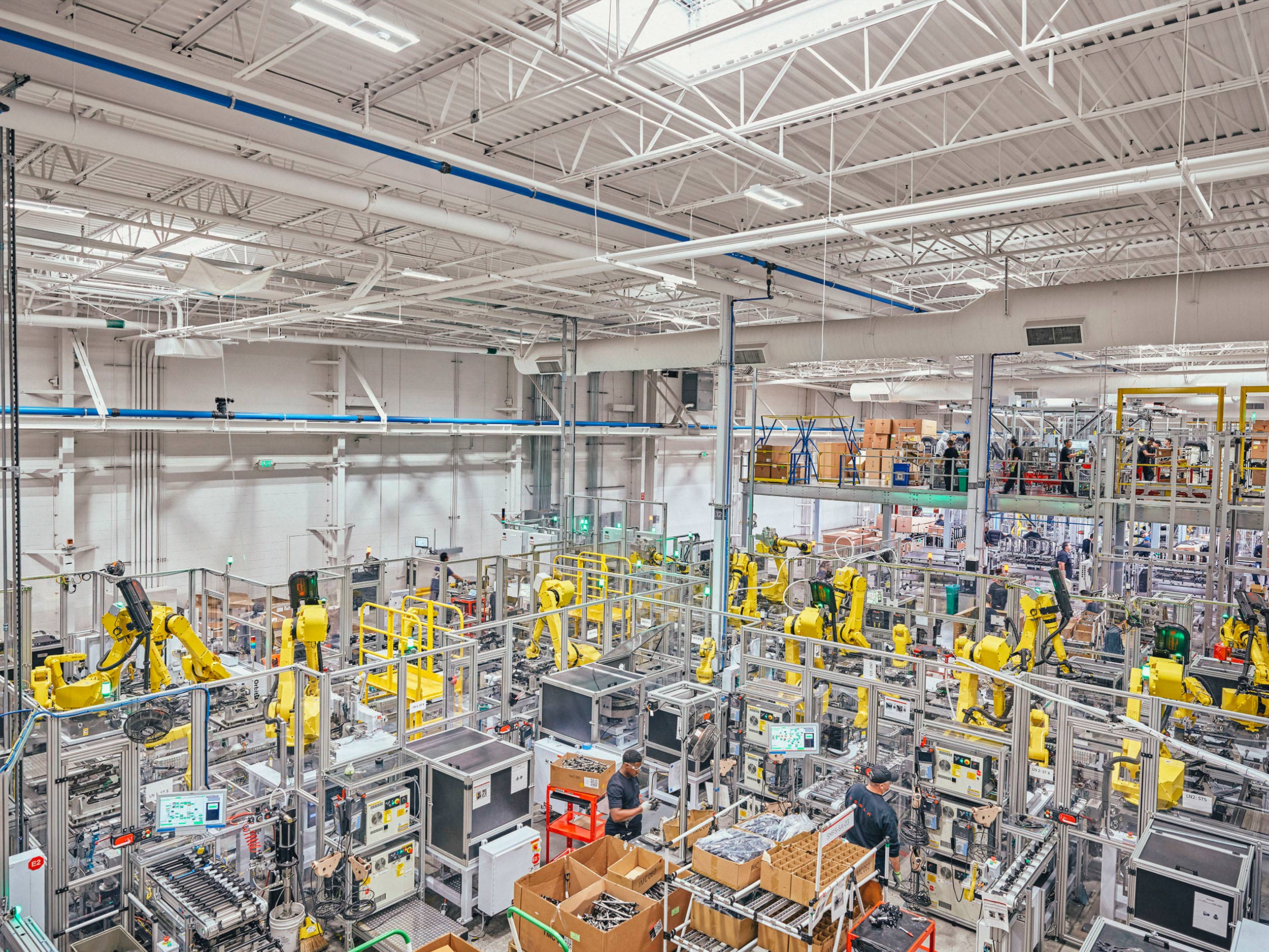 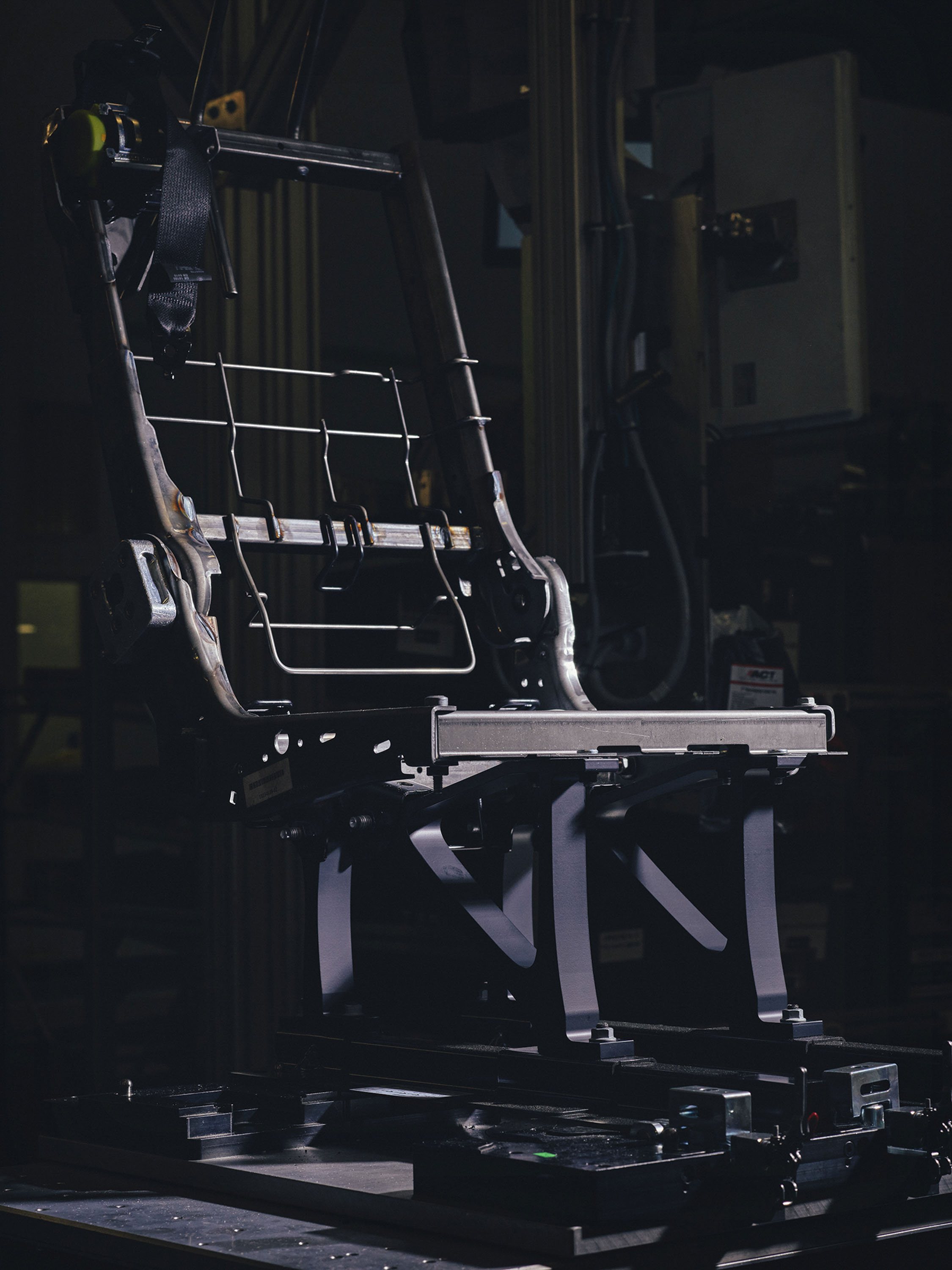 Tesla says Elon Musk personally helped design the extruded aluminum base of the Model X seat above. With the seatbelt housed entirely within the backrest, the base must be able to absorb tremendous force. 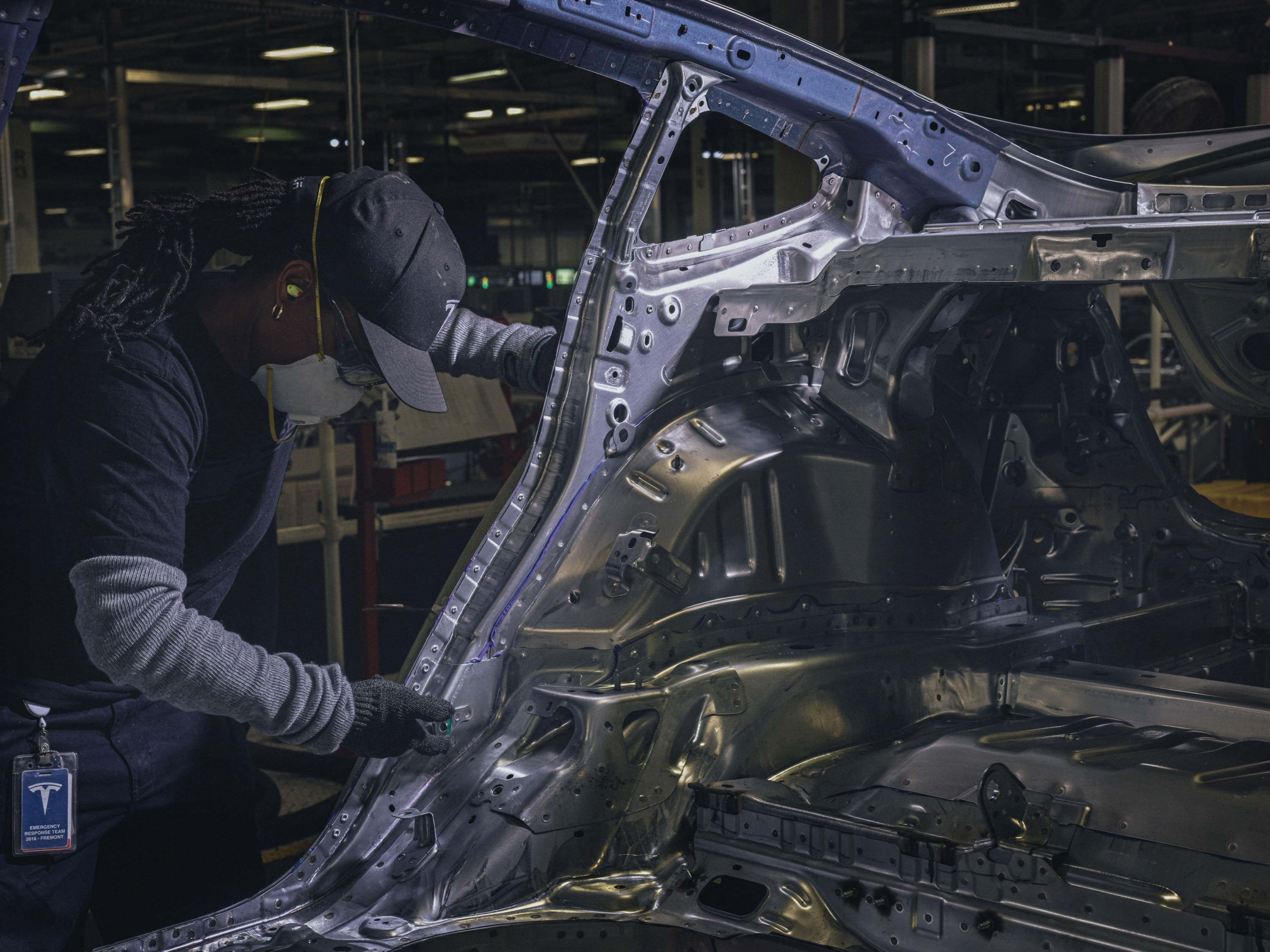 Quality Control Tesla says it has 47 robots deployed in scanning stations throughout the body line. They measure 1,900 points in every Model 3 to match them to design specs—with a precision of 0.15 millimeters. Torque measurements are also automatically recorded for every bolt that's fastened. During the final test drives on the track, sound recorders measure squeaks, rattles and wind and road noise that a test driver might miss. All of this data is stored with each car's unique Vehicle Identification Number, or VIN, so service centers can trace any issue back to a root cause in the factory. The idea is that Tesla will be able to improve its cars, even after they're in a customer's driveway. 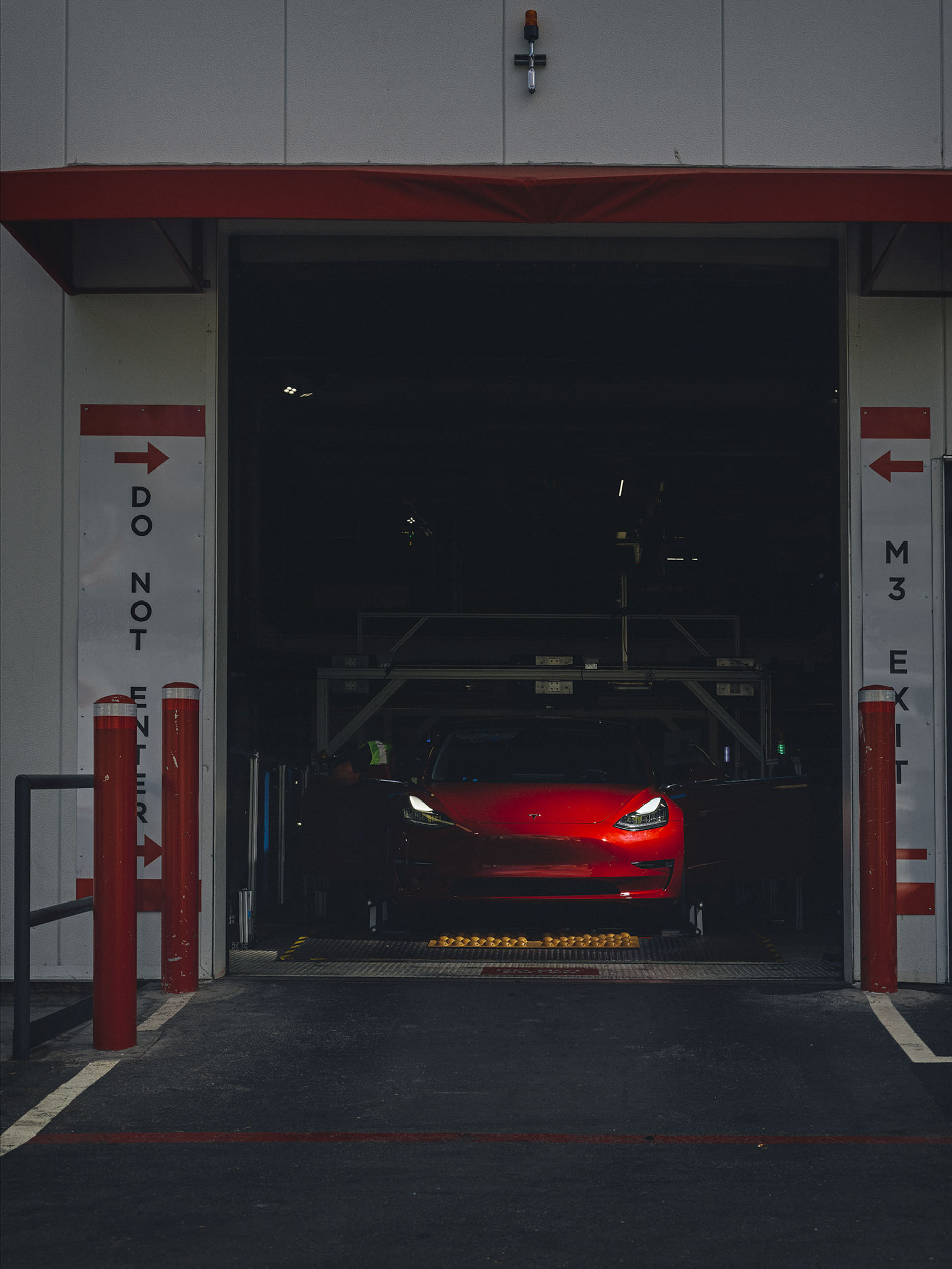 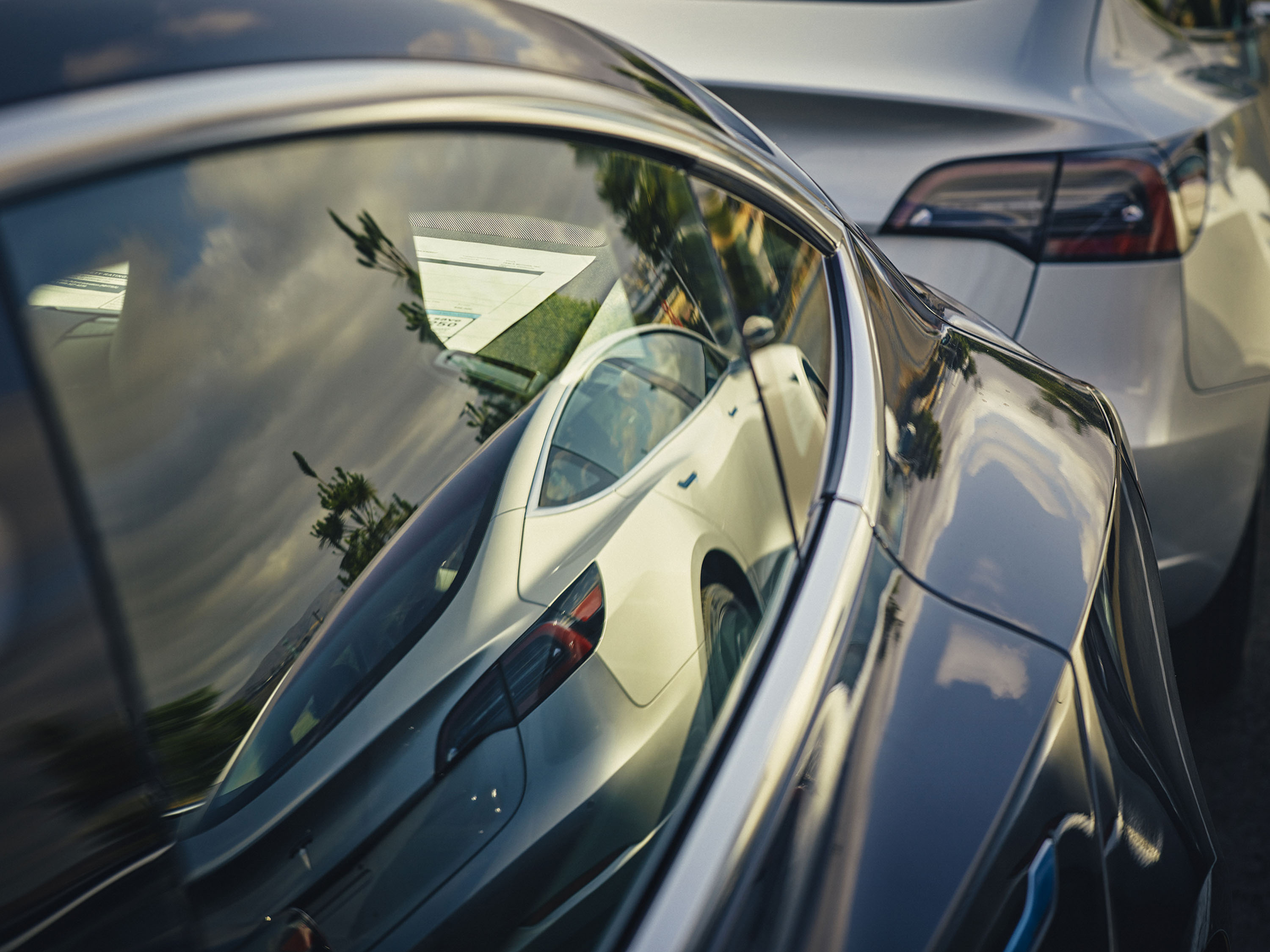