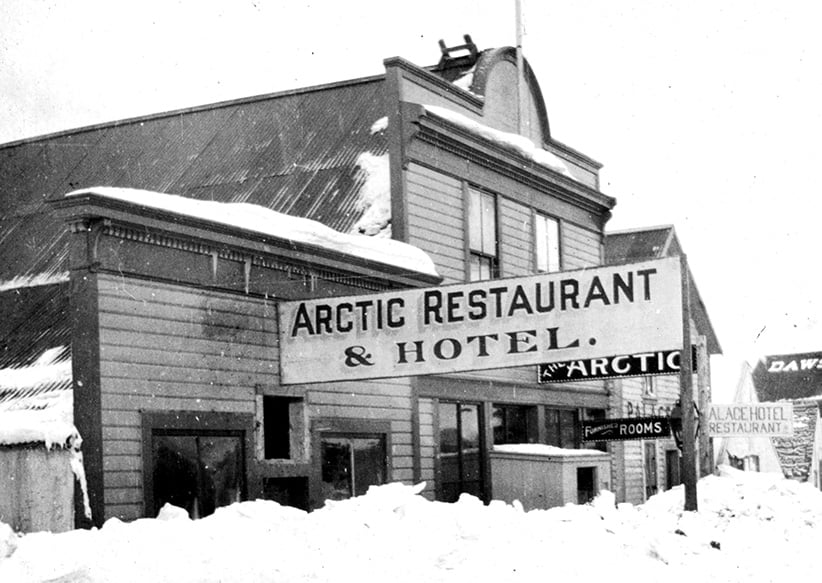 Donald Trump's grandfather opened this hotel during the Yukon gold rush, boasting 'every delicacy in the market' and 'private rooms for ladies'

Just off the shores of Lake Bennett, enjoy the best swan and caribou meat you'll ﬁnd anywhere in these mountains, and probably better than anywhere in Canada, believe me. Many people from many tents are saying the whiskey is very, very, classy. And the ladies—they'll make your head spin, and many other things. Those other tents and hotels serve horsemeat, and it's disgusting. If you want luxury as badly as you want gold, there is only one place, and only one name.

OK, this sort of language wasn't in recorded Klondike Gold Rush texts from 1898, at least not from the proprietor of the New Arctic Restaurant and Hotel. But his grandson, Donald Trump, might not have been positioned to dazzle and sometimes terrify America with his boastful sales pitches were it not for Fred Trump and his plucky immigrant's story, his tasty meals and other delicacies of the flesh, and the small fortune he made in the northern wilds of this country that now has a health care system the Republican presidential candidate says is ruinous, a country that eagerly welcomes the Syrian refugees he calls terror's Trojan Horse.

Whether Donald Trump wins or loses with his presidential bid, a monument of sorts to his paternal grandfather's three lucrative years in Yukon and the Canadian North will open along Lake Bennett next year—although that fabled surname won't appear anywhere near it, in five-metre-high letters or otherwise.

Before explaining that, let's go back to a time long before Trump Winery's bottles were chilled at finer Trump Hotels the world over, to a place where Trumps themselves were in the messy business of cultivating, picking and crushing grapes. Friedrich Trump was born in 1869 in Kallstadt, Germany, in the heart of a western winemaking region. Friedrich was no standout among his five siblings—he was too frail to work the family vineyard, says Gwenda Blair, the chief biographer of Trump and these boughs of his family tree. Friedrich's father died when he was eight. His mother sent Friedrich, at 14, to become a barber's apprentice. A couple of years later, as the military draft loomed and there wasn't much hair to cut in his village, the 16-year-old Friedrich cobbled together enough deutschmarks to buy passage on a steamship to New York City. 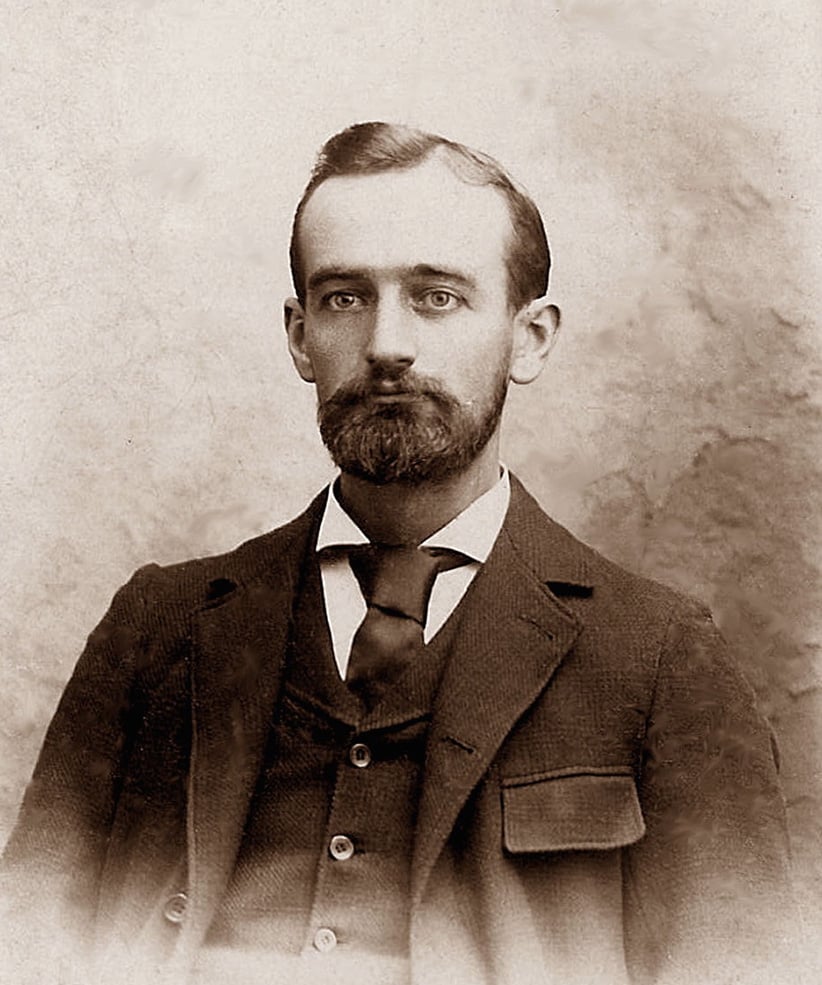 The land of opportunity seized him quickly; Friedrich got hired by a barbershop within hours of arriving in Manhattan. Six years on, he grew weary of the living-wage work. In 1891, Donald Trump's grandfather would be first in the chain to dream and reach for something bigger.

Friedrich left his New York enclave of fellow Germans and took his savings across the land to Seattle, a booming resource and port city. He hung his shingle as Fred Trump at the Dairy Restaurant he'd opened in Seattle's red-light district. In keeping with the local custom, the Dairy's predecessor eatery advertised "private rooms for ladies"—1891-speak for prostitution—and it's likely Trump didn't end the practice, Blair writes in Trumps: Three Generations that Built an Empire. Shortly, his interest turned to gold; namely, the town of Monte Cristo, which was showing promise for gold and silver deposits, some 110 km east of Seattle. He invested in some land there, but also stuck with plying his hospitality trade for the men doing all the digging.

Related: It may feel grim for Trump. But it ain't over.

In the summer of 1897, a ship of grubby and suddenly wealthy prospectors arrived with news of a big gold strike in Canada's remote northern reaches, near Dawson in the Yukon territory. By then, Trump was already on the hunt for those riches, showing some flashes of his family's later business savvy—and at the same time his grandson's blundering streak. Fred Trump had sent two miners north to lay claims, and before the gold-rush headlines hit Seattle's newspapers, they'd already staked a $15 claim in the Trump name on Hunker Creek, not far from the first strike at Bonanza Creek. A day later, Trump's associates profited by flipping the land for $400, Blair writes. Flipping was common in the gold rush days.

"It was uncertain whether they were two cents' worth, let alone two million," Yukon historian Michael Gates says. Had they held it, these Washington-state miners and Trump could have made vastly more than they did. Hunker Creek claims panned out—yep, that's where the phrase comes from—as one of the most productive creeks in the gold rush.

It's unclear whether word of that blown opportunity reached Trump the restaurateur. He was already saving money from his restaurant till to trek north himself. In early 1898, he sailed up the Pacific Coast with gear for the long hike through Yukon, though he "had no plans to mine himself," Blair writes. 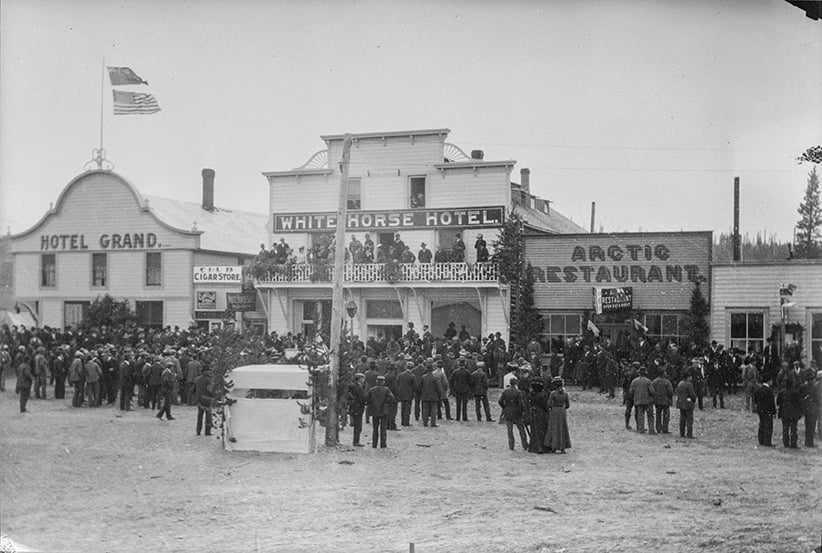 Before the train, the gold rush routes were through the Alaska and Canadian mountains. White Pass, which Trump is believed to have taken, was dubbed Dead Horse Trail, the ground a "vile slush" of animal parts, the pass walls "stained dark red from the blood," Blair writes. Pairing up with a fellow traveller named Ernest Levin, Trump set up a tent restaurant along the route, likely serving up flash-frozen horsemeat, according to The Trumps. Then in May 1898, the German-American and his partner escaped the pass and reached the new town of Bennett, a collection of tents and men building Dawson-bound boats and awaiting the ice breakup. Trump and Levin bought lumber to erect a two-storey building on Main Street. The New Arctic would feed the thousands of travellers and stranded folks alike, boasting an array of fine and non-equine meats, "Every delicacy in the market," "Fresh oysters in every style," and yes, private rooms for ladies.

"Mining the miners was the smart thing to do," Blair tells Maclean's. "Where was the money to be made? It was to be made out of the guys doing the hard work, not out of the ground." Prospectors were lucky to strike any gold, and luckier to escape the Arctic with any wealth; one of the other famed names to rise from the Klondike rush was Alexander Pantages, who started with a theatre in Dawson and would later launch a network that included Pantages theatres in Toronto and Winnipeg. The Guggenheims would find post-rush bounty with a company that dredged Klondike rivers, but already had family riches that the Trumps had yet to amass.

In Bennett came a warning about Trump and women, more than a century before Donald's brags about groping women would echo through a presidential campaign. A letter-writer in the Yukon Sun said single men would find at the New Arctic the best food in Bennett, but he warned "respectable women" away from staying there, "as they are liable to hear that which would be repugnant to their feelings and uttered, too, by the depraved of their own sex," Blair's book records. Donald Trump, for his part, told the New York Times that reports of prostitution at his granddad's restaurant are "totally false," though he was born 28 years after the Yukon entrepreneur's death.

Related: Why would any woman vote for Donald Trump? Here's why.

The Klondike rush had begun its decline by the time New Arctic began in Bennett, but a train close to completion all the way from the port at Skagway, Alaska, to Whitehorse would outright kill Bennett and its businesses. Trump and Levin set their restaurant's frame on a raft toward Whitehorse so it could open in time for the White Pass & Yukon Route's opening in summer 1900. With a wood-framed tent and a false façade, the Arctic Restaurant opened up across Front Street from the terminal. In this fledgling city, there was competition: the Hotel Grand and White Horse Hotel on the same block dwarfed the Trump eatery. Rivals advertised fine hotels and cigars, or stabling for dogs and horses; the Arctic was more vague and braggadocious, offering itself as the "newest, neatest and best-equipped north of Vancouver," states Trump's ad in the Whitehorse Star.

Prospectors were struggling up north, but business remained brisk, even if winter was dreadful and dreadfully slow. "We have come to stay," a February 1901 restaurant ad proclaimed. (Wrong!) That spring, Trump left town just as a new crackdown came on liquor and other vices. He sailed home to Germany with a nest egg of roughly $500,000 in current value, found a wife and then returned to New York, where his son would launch his family into land development.

This was a Trump who knew when to quit. The 1901 Canadian census counted 27,000 Yukon residents, more than Vancouver had at the time. A decade later, the territorial population plunged by two-thirds. In new hands, the restaurant burned down in the great Whitehorse fire of 1905; it was rebuilt but didn't last long. On its site now is the low-slung Horwood Mall, full of Bernie Sanders-friendly local boutiques like Baked Café, Cultured Cheese and Climate Clothing. Trump history has little to no imprint on Whitehorse, save southerners' mainly recent interest. "There are a lot of people who gain a piece of the action in the Yukon, make money and either never live there or only come very brieﬂy and go on to make lives elsewhere," says Whitehorse historian Linda Johnson.

Related: Donald Trump is still standing, but his wounds are fatal

It's a different story down in Bennett. All that remains from the gold rush town is the vacant church. But that's changing, as the nearby Carcross-Tagish First Nation and Parks Canada combine to create a high-end "glamping" experience with tent-style cabins and a recreated restaurant for those shelling out $1,600 for four nights to stay at Chilkoot Trail Village. "At the heart of the village is a replica of the famous Arctic Restaurant & Hotel, that was 'the place to be' at Bennett City during the stampede to the Klondike Gold Rush in 1898," states the attraction's draft website by Nature Tours Yukon, which will market the frontier-inspired experience.

The promoters are treating the family link to the controversial politician as an awkward historical fact rather than a marketing ploy. "For us, it's more of a campfire tall story," says Nature Tours president Joost Van Der Putten.

Would that change if Trump wins, and this becomes part of presidential family lore? "Probably not, and you never can tell the way things work out," Van Der Putten says. "In marketing and sales, you have to seize opportunity as it comes; that is something Mr. Trump is teaching us."

Due to the 1918 flu pandemic that felled Fred Trump, Donald never got to hear Klondike tales from his grandfather, or learn about the hard work trudging through Yukon mountains or running an anything-goes restaurant. Fred Trump's grandson isn't one to tolerate a kitchen's heat or an Arctic deep freeze. But the bold and whatever-it-takes-to-prosper steps? Those seem to be inherited traits.