The Iranian military claims to have successfully duplicated the RQ-170 Sentinel drone that was captured in Iran in 2011, and it has put the drone on display alongside the original. The home-built version, Islamic Revolutionary Guard officers claim, could be used to attack US Navy ships in the Persian Gulf. But outside observers believe the copy is about as capable of that as the mock-up of a US aircraft carrier Iran built, allegedly for a movie set.

On May 11, Iranian television broadcast a report from an exhibition by the Islamic Revolutionary Guard Corps Aerospace Force in Tehran, where Ayatollah Ali Khamenei was shown the two unmanned aircraft by military officers. "Our engineers succeeded in breaking the drone's secrets and copying them," an officer said in the video broadcast. "It will soon take a test flight." 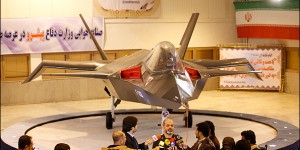 The RQ-170, built by Lockheed Martin, is a turbofan-powered unmanned aircraft flown by the 30th Reconnaissance Squadron, part of the Air Force's 432nd Wing (the Air Force's drone command). The aircraft first gained notoriety as the secretive "beast of Kandahar" during operations in Afghanistan in 2007. The Air Force is believed to have purchased 20 Sentinels.

Little is known about their operational role, though their "flying-wing" airframe appears to have been designed for stealthy reconnaissance and surveillance missions. It's believed that the aircraft captured in 2011 by the Iranians was being used to conduct surveillance of nuclear facilities.

The Iranians claimed that they were able to jam the Air Force's data link to the drone and take control of it, bringing it down for an almost soft landing. They also claimed that the drone was recovered nearly intact and that the Revolutionary Guard was able to download data from its onboard systems. While the US government disputed those claims, later reports indicated that it was within the realm of possibility that the Iranians had managed to take over control of the drone.

Just what sort of "secrets" the RQ-170 surrendered to the Iranians is not clear. But aviation industry analysts who saw the footage of the Iranian clone of the RQ-170 have said it appears to be a fake—nothing more than a cheap fiberglass mockup put together for propaganda purposes, similar to the mockup of a stealth fighter the Iranians displayed last year. (Footage of that plane "flying" appeared to actually be of a small radio-controlled model.)

"It seems their fiberglass work has improved a lot," an industry source familiar with the RQ-170 told US Naval Institute News. "It also seems that if it were a functional copy, versus a detailed replica, it wouldn't necessarily have the exact same landing gear, tires, etc. They would probably just use whatever extra F-5 parts or general aviation parts they had lying around."