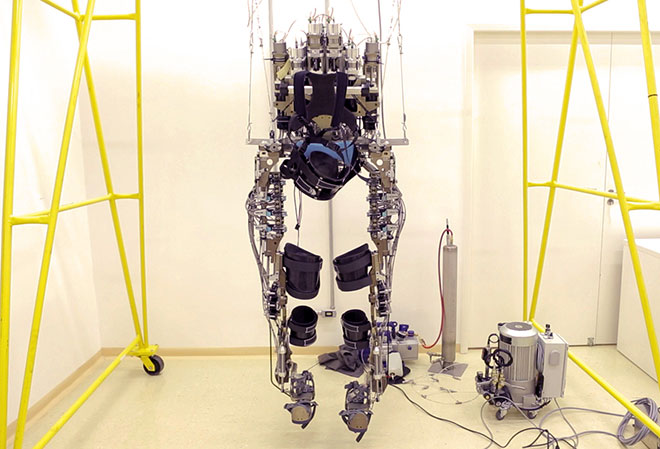 If you tune in to the opening ceremony of the World Cup in São Paulo on June 12, you might see something truly spectacular. If things go according to plan, a paralyzed young adult will walk onto the field and kick a soccer ball, assisted by a robotic exoskeleton operated by the person's brain.

The man behind this bold plan is Miguel Nicolelis, a Brazilian-born neuroscientist based at Duke University. Nicolelis is a leading researcher in the field of brain-machine interfaces, devices that tap electrical signals from the brain to operate computers or prosthetic limbs for people paralyzed by accidents or neurodegenerative disease. He sees the World Cup demo as a milestone for Brazilian science and a step toward making wheelchairs obsolete. He has compared it to putting a man on the moon.

Not everyone shares that view. Some researchers have raised scientific and ethical questions, including whether the technology is as advanced as Nicolelis claims, and whether the demo risks exploiting the participant or raising false hopes by promising too much, too soon.

"There's a lot of people betting that it's really nothing amazing, and it's really just grandstanding," said Daniel Ferris, a neuroscientist and biomedical engineer at the University of Michigan. Ferris says he'll reserve judgment until he sees it.

But even for experts, the science behind the demo will be difficult to evaluate simply by watching it on TV.

For brain-machine interface researchers, the impressiveness of the demo depends largely on the degree to which the exoskeleton is controlled by the person's brain. If the brain merely sends stop/go signals that prompt the robot to execute a programmed set of movements, that's roughly in line with the current state of the science. Several exoskeletons that can allow a paralyzed person to walk (slowly) already are commercially available, and researchers have had some (modest) success starting and stopping them with signals from the brain. At the other extreme, if the person walks gracefully at a normal speed and can make adjustments on the fly–like if the ball moved just as they were about to kick it–that would be a phenomenal advance.

When I visited his lab last year, Nicolelis was planning to use electrodes surgically implanted in the volunteer's brain to record the signals of individual neurons in brain regions that control movement and use these to control the exoskeleton. However, his team now plans to use non-invasive EEG electrodes placed on the scalp instead. 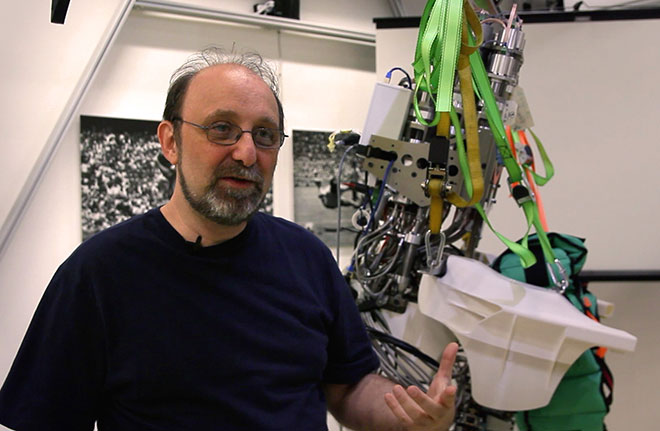 There's been a long-running debate in the field about which approach is better, and at least until recently Nicolelis came down strongly on the surgically implanted electrode side. Based on more than a decade of research in his lab, he argued that recording the activity of hundreds or even thousands of neurons individually provides richer information that can be harnessed to create more naturalistic movements. EEG, by contrast, picks up combined signals from millions of neurons across a much broader swath of the brain. (Scientists sometimes illustrate the difference with an orchestral analogy: Implanted electrodes are like recording a symphony with a mic on just a few individual instruments, EEG is more like recording the whole group with a single mic, but from outside the concert hall.)

Neither approach is perfect, and a major challenge facing brain-machine interface researchers is how to get enough information out of either type of signals to operate the sophisticated robotic devices engineers can now build. The neuroscience hasn't yet caught up to the robotics.

Looming deadlines and the difficulty of organizing surgical implants forced Nicolelis's team to switch to the less invasive EEG strategy, Alan Rudolph, vice president for research at Colorado State University and manager of the project, recently told MIT Technology Review.  "We are well aware of the limitations of EEG, but we decided to show what could be done," he said. (Both Rudolph and Nicolelis declined to be interviewed for this article, citing time pressure, and in Nicolelis's case an article I wrote last year that included concerns other researchers had raised about the project).

Even with EEG, there is potential for big improvements over current systems. One of the most developed exoskeletons is a Japanese device called HAL (Hybrid Assistive Limb), which is intended for people with only partial paralysis or extreme muscle weakness. "It has tiny sensors that are instrumented all over the exoskeleton, so it measures how your legs are pushing against the device," Ferris said. Force sensors in the feet detect when a person leans forward, triggering the exoskeleton to move, sort of like a Segway. "You don't have very much control."

A few systems are designed to help people with complete paralysis. One of these, an exoskeleton made by Rex Bionics, has been tested with people wearing an EEG cap to control its movements. It's remarkable, but slow (as you can see in this video). "It moves at a pace you'd get incredibly frustrated with," Ferris said. "It takes several minutes to walk a few meters."

If he had to guess, Ferris says no more than 30 such exoskeletons are in regular use by people with full paralysis. Regular use means they might use it for an hour or two at a time, he says. "You're not going to see them wearing it every day, all day long."

A big question is whether the planned World Cup demo will surpass what's been done previously. The new exoskeleton was developed by roboticist Gordon Cheng of the Technical University of Munich, and a team of more than 100 scientists and engineers are working furiously to get it ready in time. (The video above shows a bit of what it can do–click the captions setting for English subtitles). They tested the first patient just two weeks ago, on April 30, according to an update (and awesome photo) on the project's Facebook page. Hundreds, if not thousands of people have posted encouraging messages, and hopes that the research will benefit their loved ones.

"Results are much better than expected," Nicolelis said in a recent post on the Brazilian government's World Cup website. "We didn't expect to be so far advanced from a clinical point of view, nor having such interesting results in neuroscience terms, the way we've had in the last few months."

But there's more than just science going on here. In Brazil, much has been made–both pro and con–of the social message sent by the demo.

"The main message is that science and technology can be agents of social transformation in the whole world, that they can be used to alleviate the suffering and the limitations of millions of people," Nicolelis told the BBC last week. He has also said he sees it as an opportunity to give back to his native country, which he left at age 27 to study in the U.S., and to elevate the position of Brazilian science in the eyes of the world. 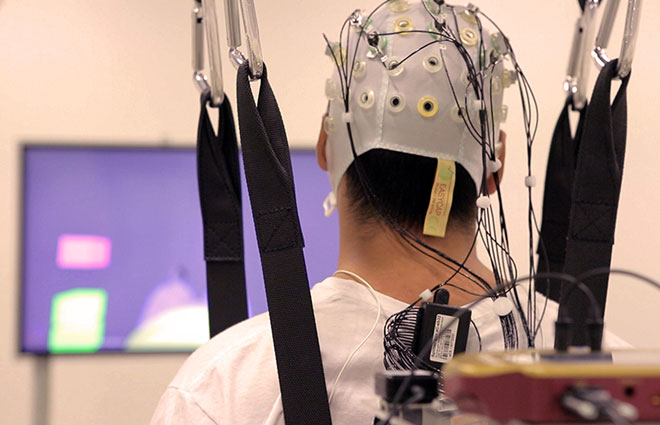 Yet the World Cup preparations have occurred against a backdrop of growing unrest as Brazilians have been angered to see the government spend billions to build giant stadiums in cities where many people don't have adequate sanitation, safe drinking water, and other basic services. The government contributed $15 million to the exoskeleton research project.

All of this rankles neuroscientist Edward Tehovnik of the Universidade Federal do Rio Grande do Norte in Natal, Brazil, who criticizes the demo on both scientific and social grounds. "Every day on my way to work I pass this mega stadium. It's beautiful… like something from another planet," he said. "And then I look over and I see garbage on the streets, I see potholes everywhere, I see houses collapsing, I see poverty." Tehovnik says he wishes the money for the stadium and the exoskeleton demo had been used to build a hospital or a school, or something else that would benefit people in the long run. "For me, this represents an unfortunate thing, and this kid kicking the ball is an extension of all that."

Tehovnik is one of the few scientists willing to speak critically about Nicolelis' plan on the record. He has a tumultuous history with Nicolelis, who hired him in 2010 to work at a new neuroscience research institute Nicolelis founded in Natal, then fired him in 2012 after a falling out.

Other scientists have misgivings too, but they're reluctant to voice them publicly. "This is a very complex topic where personal pride, jealousy, money and expected fame clash," said one prominent neuroscientist, who agreed to comment only on the condition of anonymity. Ten scientists, including several prominent brain-machine interface researchers, declined to comment on the record or did not respond to interview requests for this article. Some of those who did respond cited fears of jeopardizing future grant applications or publications in a competitive field where scientific disagreements sometimes turn personal.

"I think there is a 50-50 distribution of the pro and contra issues," the neuroscientist said of the World Cup demo, "but we all feel that distinguishing visionaries from charlatans can be told only two decades after such debates."

In the meantime, here's what to watch for if you tune in to see the demo in a few weeks. The speed and fluidity of the movements is a good gauge, Ferris says. (Watch the Rex Bionics video for a reality check–given the current state of the art, there's virtually no chance we'll see a paralyzed person bend it like Beckham).

Another important factor, he says, is the person's level of disability. "Is this someone with a partial spinal cord injury who could maybe walk a little on their own, but now they're walking with the exoskeleton around them?" That would make it very difficult to know how much the exoskeleton is contributing. It will also be nearly impossible to tell how much of the control is coming from the person's brain, Ferris says. "You're going to have to rely on what they claim."