José, 5, a child who was separated from his father at the United States border, keeps drawings of his family.

When he landed in Michigan in late May, all the weary little boy carried was a trash bag stuffed with dirty clothes from his dayslong trek across Mexico, and two small pieces of paper — one a stick-figure drawing of his family from Honduras, the other a sketch of his father, who had been arrested and led away after they arrived at the United States border in El Paso.

An American government escort handed over the 5-year-old child, identified on his travel documents as José, to the American woman whose family was entrusted with caring for him. He refused to take her hand. He did not cry. He was silent on the ride "home."

The first few nights, he cried himself to sleep. Then it turned into "just moaning and moaning," said Janice, his foster mother. He recently slept through the night for the first time, though he still insists on tucking the family pictures under his pillow.

José's separation from his father is part of the Trump administration's latest and most widely debated border enforcement policy. Last month, Attorney General Jeff Sessions announced that the government would criminally prosecute everyone who crosses the border illegally, a directive that is already leading to the breakup of hundreds of migrant families and channeling children into shelters and foster homes across the country.

The goal, according to administration officials, is to discourage Central American families from making the perilous journey to the United States' southwest border, where they have been arriving in swelling numbers this year to claim asylum.

Kirstjen Nielsen, the homeland security secretary, emphasized that separating families was not the aim but merely the effect of a decision to step up prosecutions of those who cross the border illegally. "We do not have a policy to separate children from their parents. Our policy is, if you break the law we will prosecute you," she told the Senate Homeland Security and Governmental Affairs Committee on May 15.

She said the Trump administration is doing a better job than its predecessors in assuring that migrant children are placed with sponsors who are carefully screened. "We can make sure that the children go to people who are actually family members and who are not traffickers and who won't abuse them," she said.

Whether the policy will succeed as a deterrent remains an open question. What is clear is that it is creating heartbreak and trauma for those subjected to it, with parents and children often unaware of one another's whereabouts.

Before the so-called zero-tolerance policy was officially announced on May 7, the Trump administration already had begun prosecuting some parents and sending their children to government shelters. KIND, an organization that provides minors with legal counsel, says it is aware of at least six children left behind after their parents were deported, including a 2-year-old girl.

In several letters to the Department of Homeland Security, the American Academy of Pediatrics has urged an end to parent-child separation, which researchers have said can cause lifelong trauma in children. When the policy was unveiled, the academy's president, Dr. Colleen Kraft, said she was dismayed at its "sweeping cruelty."

José's last name and that of his foster family, as well as where they live, are not being published in order to protect their privacy.

Since his arrival in Michigan, family members said, a day has not gone by when the boy has failed to ask in Spanish, "When will I see my papa?"

They tell him the truth. They do not know. No one knows.

José's father is in detention, and parent and child until this week had not spoken since they were taken into the custody of United States authorities. 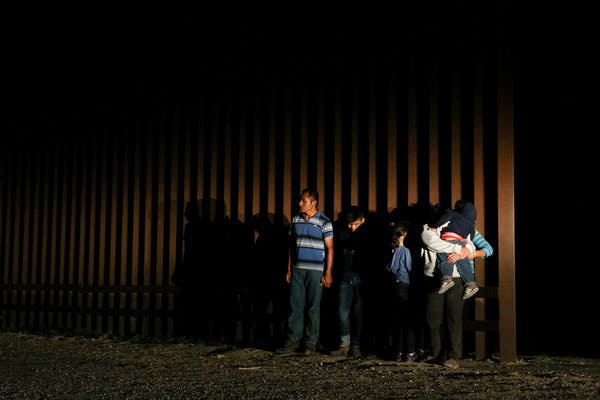 Immigrants near McAllen, Tex., in April. Last month, Attorney General Jeff Sessions announced that the government would criminally prosecute everyone who crosses the border illegally.CreditLoren Elliott/Reuters

"I am watching history happen before my eyes. It's horrendous," said Janice, 53.

Janice, her husband, Chris, and their two teenage daughters have firsthand experience with underage migrants. They are among a number of families who have in recent years provided a temporary home, called transitional foster care, to minors seeking refuge in the United States, usually after fleeing violence and economic uncertainty in Honduras, El Salvador or Guatemala.

In the last two years, 12 children, including two sets of siblings, have occupied the room upstairs with its soothing white-and-light-blue walls and twin beds with colorful bedding. All had arrived in the United States alone and remained in the family's care for a few weeks or months until a long-term sponsor already in the country, often a relative, was identified and cleared by the authorities to receive them.

"They had access to their parents on a daily basis," Janice said. "They talked to them on the phone. We have done video chats with Mom and Dad and siblings with every placement — except now."

José is the first child they have hosted who crossed the border with a parent, rather than alone, then was forcibly separated and left with no ability to contact them. On his flight to Michigan were two other Central American boys in similar circumstances who were placed with families in the area.

The majority of youths apprehended at the border over the past several years have been housed in government shelters and most of them are teenagers who came alone, often expecting to join family members already in the United States. About 11,000 children are currently in these facilities, which are at 95 percent capacity, according to Kenneth Wolfe, a spokesman for the Department of Health and Human Services. The department has reserved an additional 1,218 beds in various places for migrant children, including some at military bases, he said.

On May 10, three days after Mr. Sessions announced the zero-tolerance policy, the government issued a call for proposals from "shelter care providers, including group homes and transitional foster care" in anticipation of a surge in children separated from their parents who would require housing.

In response, Bethany Christian Services, which is coordinating foster placements for about 100 migrant children in Michigan and Maryland, including José's, is planning to expand to several other states. Families receive a stipend of about $400 a month to defray the costs of taking care of a child.

"We don't want to have to ramp up," said Chris Palusky, president of Bethany. "We would prefer these kids stay with their families; they should not be separated. But being in a loving foster home is better than being on a military base."

Among other children recently fostered by Bethany families is an 18-month-old girl separated from her father, who has been detained. The child cries frequently, especially when she changes settings, such as leaving her foster family's home to attend a doctor's appointment.

A 3-year-old boy taken from his mother at the border was inconsolable during his flight to Michigan and cried incessantly on arrival at his new home last month, she said. He recently has begun to bond with his foster mother, from whom he is now reluctant to be apart. "He seems fearful of losing yet another attachment," Ms. Abbott said.

The airport was deserted when José landed in Michigan on May 23 at around 12:30 a.m., and it was close to 2 a.m. by the time Janice drove up to the house with him in the back seat of her van.

"He seemed very tired and confused, but was compliant," Janice recalled.

At first, José was sad and withdrawn. He did not initiate any interaction with the family, but followed directions from Janice, who speaks basic Spanish, to do things such as wash his hands and come to dinner.

"He kept up a little wall," Janice said.

He refused to shed the clothes he had arrived in, an oversize yellow T-shirt, navy blue sweatpants and a gray fleece pullover likely given to him by the authorities who processed him in Texas.

"For two days, he didn't shower, he didn't change his clothes. I literally had to peel the socks off his feet. They were so old and smelly," Janice said. "I realized that he didn't want anyone to take anything away from him."

A drawing of José's father. Since the child's arrival in Michigan, his foster family said, a day has not gone by when he has failed to ask in Spanish, "When will I see my papa?"

The one thing that animated him was discussing his "photos," as he called the family drawings.

He introduced "mi familia," pointing to the figures of his parents, brother and younger sister. Staring intensely at the sketch of his father, with a slight mustache and a cap, he repeated his name out loud again and again.

It was "just me and him" on the trip from Honduras, he told Janice one night as he lay in bed shuffling the pictures, taking turns looking at one and then the other.

"He holds onto the two pictures for dear life," Janice said, through tears. "It's heart-wrenching."

Janice does not blame José's parents for putting him through the ordeal.

In early May, she traveled to Central America to see for herself the conditions on the ground, and returned convinced that gang-fueled violence, extortion and recruitment of children were compelling parents to make the arduous journey over land with their children to the United States. "I have nothing but sorrow and compassion for the families," she said.

When sirens pierced the quiet of the night last week, José's eyes widened with fear. "La violencia, la violencia," he said. The family assured him that it was not violence; it was fire trucks.

In recent days, the boy began attending a multi-age kindergarten at Bethany with about a dozen other migrant children.

A natural athlete, he started playing soccer and catch with Chris and Janelle, the couple's 14-year-old younger daughter. His papa taught him "fútbol," he told them.

By the beginning of week two with the family, he cracked some smiles and even allowed himself a few giggles.

"It's incredibly conflicting for me as a parent to watch this little boy begin to just have fun and experience joy in simple pleasures," Janice said. "His dad doesn't get to see him being joyful. It's as if these moments with his son have been stolen from him. I am no substitute."

For sure, the boy's family always seems to be on his mind.

At bedtime Thursday, he announced: "I am going with my papa on Saturday."

To which Janice responded, "You know, mi amor, I don't think it will be Saturday. First we have to get more information about where your dad is so that we can call him, and then we'll see."

He listened, and then asked her to remain in the room. "I don't want to be alone," he said.

Earlier this week, José spoke with his parents for the first time since their lives had diverged. The phone calls were separate: His father remains in detention, and his mother is in Honduras.

The call went smoothly, according to the case manager.

But it changed everything. Somehow, it had sunk in that there was no way of knowing when he would see his family. "It triggered all the separation trauma again," said Janice.

She tried to offer him his toys, but he erupted in anger, screaming and crying at the kitchen table for almost an hour.

"It was really hard to watch. The look on his face was anguish," said Janice, her voice breaking.

When his fury subsided, the boy collapsed on the kitchen floor, still sobbing. "Mama, Papa," he said, over and over.

Nearby lay the family pictures, which he had flung on the floor.

An earlier version of this article said that José had not spoken to his family since he and his father were separated at the border. But he was able to speak to his parents for the first time this week.