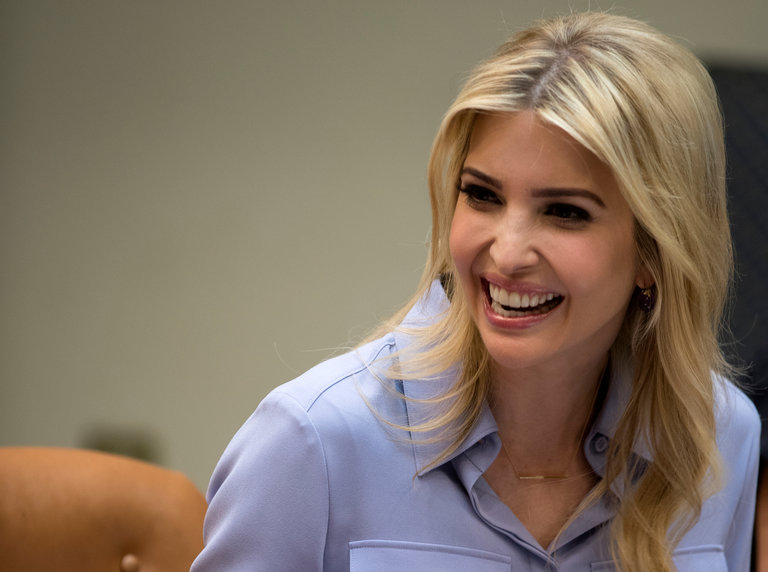 Ivanka Trump during a meeting with female small-business owners at the White House on Monday.

Ivanka Trump, the elder daughter of President Trump, is becoming an official government employee, joining her husband, Jared Kushner, in serving as an unpaid adviser to her father in the White House.

The announcement on Wednesday amounts to the formal recognition of the value Mr. Trump places on the judgment and loyalty of both his daughter and his son-in-law. While relying on family members for advice is hardly unusual for a president, giving them a formal role has few precedents.

Ms. Trump, 35, will be an assistant to the president; Mr. Kushner, 36, has the title of senior adviser.

When questions were raised about whether Mr. Kushner's appointment violated federal anti-nepotism laws, the Justice Department wrote a memo in January concluding that the rules did not apply to the White House.

Ms. Trump said last week that she planned on serving as an informal adviser to her father, and she already has an office in the West Wing — upstairs from her husband's. She was also in the process of receiving government-issued security clearance and communications devices. But that plan had prompted criticism from ethics experts, who had said it would allow her to avoid financial disclosure rules.

They had argued that Ms. Trump's use of those resources had made her a federal employee in all but name, and they had called on the administration to officially acknowledge her as a staff member.

"I have heard the concerns some have with my advising the president in my personal capacity while voluntarily complying with all ethics rules, and I will instead serve as an unpaid employee in the White House Office, subject to all of the same rules as other federal employees," Ms. Trump said in a statement on Wednesday.

"Throughout this process I have been working closely and in good faith with the White House counsel and my personal counsel to address the unprecedented nature of my role," she said.

Ms. Trump's lawyer, Jamie S. Gorelick, said that "she will file the financial disclosure forms required of federal employees and be bound by the same ethics rules that she had planned to comply with voluntarily."

Ms. Trump stepped down from her namesake branding and licensing business when her husband joined the administration.

Questions about conflicts of interest related to those businesses have trailed Ms. Trump since her father won the presidency. In December, The New York Times reported that she had joined her father's meeting with Prime Minister Shinzo Abe of Japan even as her company was finalizing a deal with an apparel company whose largest shareholder was a Japanese government-owned bank. (The deal was later called off.)

To minimize future conflicts of interest, The Times reported last week, Ms. Trump had transferred her brand's assets into a trust overseen by her brother-in-law, Josh Kushner, and sister-in-law, Nicole Meyer. And she enlisted the help of Ms. Gorelick, a prominent Democrat who had served as deputy attorney general under President Bill Clinton.

Under the terms of the trust, Ms. Gorelick will review all new deals for Ms. Trump's brand, and flag any potential conflicts of interest to Ms. Trump, who can exercise veto power or recuse herself from White House business.

Ms. Trump had previously separated her personal and business social media accounts, and handed over day-to-day operations of her business to the brand's president, Abigail Klem.

Critics have accused Ms. Trump of using her position in the White House to promote her brand, whose hashtag, #womenwhowork, meshes with her carefully developed image as an advocate for women in the Oval Office. (Photos of Ms. Trump posing next to the Canadian prime minister, Justin Trudeau, or sitting in on meetings with business leaders have replaced pictures of her shoes and handbags in her Instagram feed.) Those criticisms are likely to intensify as Ms. Trump cements her official role in her father's inner circle.

Mr. Kushner has sold some of his assets, including his stake in the Manhattan skyscraper 666 Fifth Avenue, to a family trust of which he is not a beneficiary, according to Ms. Gorelick. And she said Mr. Kushner does not have any involvement with the Kushner Companies, his family's real estate development firm.

People close to Ms. Trump said her official title would not mean a discernible shift from the unofficial influence she has exercised with her father.

Hope Hicks, a White House spokeswoman, referred to Ms. Trump as "first daughter" and said her service as an unpaid employee "affords her increased opportunities to lead initiatives driving real policy benefits for the American public that would not have been available to her previously."

During the presidential campaign, Ms. Trump was an advocate for a federal maternity leave policy as well as for affordable child care. Since her father's election, she has coordinated a women's economic council meeting that involved Mr. Trudeau, whom she later accompanied, along with his wife, to a Broadway play. And Ms. Trump will meet with Chancellor Angela Merkel of Germany, with whom her father held a tense Oval Office visit and news conference two weeks ago.

While Ms. Trump's portfolio appears fairly circumscribed, Mr. Kushner has broadened his. He is Mr. Trump's point man with some foreign governments and in working for Middle East peace, and he is at the helm of a new White House Office of American Innovation, which seeks to bring private sector concepts into the West Wing to streamline a bureaucracy whose upper echelons Mr. Trump has so far left largely vacant.

In the past, both Ms. Trump and Mr. Kushner leaned Democratic in their politics, forged in the corridors of liberal power in Manhattan, where they lived until January. They held a fund-raiser for Senator Cory Booker, Democrat of New Jersey, and both asked Mr. Trump not to rescind an executive order by Mr. Obama offering legal protections to gays.

While Ms. Trump may be the first child in modern history to become an employee of the White House, presidential children have wielded enormous power and influence throughout American history, according to Doug Wead, the author of "All the Presidents' Children," who also served as a special assistant to former President George Bush.

Ms. Trump's role may be new, but "you can't have more power than Anna Roosevelt had," he said, referring to the daughter of Franklin D. Roosevelt who served as a private assistant to her father. Mr. Wead also pointed to Jack Ford, Chip Carter and George W. Bush as more recent examples of presidential children who had their father's ear.

"The power of a child of a president is very unique," he said. "It's a power that Bannon doesn't have, that Reince Priebus doesn't have," he said, referring to Mr. Trump's chief of staff.

In a telephone interview, Mr. Eisen was more critical of Ms. Trump's role. He described it as "a lot of nepotism."

A version of this article appears in print on March 30, 2017, on Page A19 of the New York edition with the headline: Ivanka Trump, in Shift of Plans, Will Become a Federal Employee.