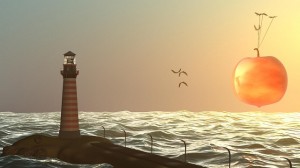 Children's literature is about the wonder of discovering new worlds, the power of imagination, and the all the little triumphs and defeats that make up a life.

It's also an excellent place to find hypothetical questions that test the laws of physics.

These are the questions posed in "James' Giant Peach Transport Across the Atlantic", a paper published last fall in the Journal of Physics Special Topics.

The paper was written and researched by four physics master's students from the University of Leicester in the UK — Emily Watkinson, Daniel Staab, Maria-Theresia Walach, and Zach Rogerson. Based on the events in Roald Dahl's James and the Giant Peach, the four set out to discover whether the book's fictional account of an adventure could stand up to serious scientific inquiry.

Turns out, it can. Mostly.

The team's analysis relied on two sets of equations — one to test the buoyancy of the peach and another to determine whether the 501 seagulls could produce enough lift force to overcome the weight of the peach and get it airborne.

In order for something to float, it needs to be less dense than the liquid it's meant to float on. Say you have the same amount — the same volume — of water and of rubber. That rubber will only float if it weighs less than the water, volume-to-volume. That's true whether you're talking about a rubber duckie or a giant peach. Or, for that matter, a boat. And this is where Roald Dahl made a very smart plot choice.

Turns out, the flesh of a peach is actually more dense than seawater. Technically, it should sink. But Dahl took advantage of the same trick that allows steel boats to float even though the metal they're made of is more dense than water — you just hollow out the inside. That's because air is less dense than water, and a boat is just a shell of steel surrounding a pocket of air. Taken together, air and steel are a lot less dense than just the steel by itself. So the boat floats. And, as the Leicester team found, so does the peach — provided that, for a peach with a radius of 6 meters, the flesh was no thicker than 1.24 meters.

Next, the team turned their attention to the skies. Could 501 seagulls really airlift a peach that large? The answer: No. To make it work, James would have needed approximately 2,425,907 seagulls. (Assuming we're talking about Common Gulls. Different birds, different numbers.)

That's because of lift force — a calculation that compares the pressure over and under each bird's wings with the area of those wings and the density of the air. (You might also know it as Bernoulli's Principle) To get off the ground, just by themselves, each seagull has to have a lift force greater than their own weight. Subtract the weight from the lift force and what you have left over is the amount of lift each bird can put towards carrying other things. The sad fact is, 501 Common Gulls don't have enough leftover lift force to get that peach to rise. Two and a half million gulls, though? That'll do just fine.

What's the point of all this? That's the really interesting part.

You're right in thinking that the plausibility of fictional scenarios isn't exactly a great problem of our time. But nobody ever said it was. That wasn't the point of this paper, or any of the other eight papers Watkinson, Staab, Walach, and Rogerson published last year.

Instead, this was about teaching them how to be better scientists.

The Journal of Physics Special Topics is, itself, a pretty special journal. It's written, edited, peer reviewed, and published by students of physics professor Mervyn Roy. Throughout the course of a semester, teams of students come up with problems they can use physics to solve. They get a week to research and write each two-page paper. Then they hand those papers off to their peers, who put them through a rigorous peer review process — critiquing the physics, demanding edits in grammar and style, and sending the students back over and over until they've polished up something that is worthy of publication.

It's a microcosm of the way academic publishing is done in the real world and it gives the students a chance to learn through trial and error both how to write a paper AND how to peer review one. That's important. Remember the story I wrote here a couple years ago, explaining how the peer review process works? One of the big critiques that scientists have of that system is that nobody is really taught how to peer review. You're just kind of tossed into it. Some people figure out how to do it well. Others … not so much. The Journal of Physics Special Topics is an attempt to solve that problem by having physicists learn peer review before they actually have to do it for real.

They also learn how to handle the social fallout of peer review. "There were some awkward moments. One of my housemates was in a different group and when I was writing reviews of what he'd written it was sometimes a bit difficult," Daniel Staab told me.

The research also forced the team to learn how to research subjects far outside their own specific field. For instance, the density of peach flesh. As you learned earlier in this article, knowing that number is a pretty important part of knowing whether a giant peach would float or sink. But it's also not a number that your average physics student in England has easy access to. At one point, Staab said, they thought they might actually have to do their own study, opening and analyzing a bunch of peaches. But in the end, they found a reference — a 1948 paper by researchers at the Georgia Institute of Technology.

So, in the end, we learn the physics of giant peaches, students learn how to be better scientists, and it's pretty much a happy ending for everybody. Except, you know, magic and wonder and suspended disbelief. But Emily Watkinson isn't too worried about that.

"When we were writing this paper, some people wondered whether it would take away from the magic of the story," she said. "But, for me, Roald Dahl keeps the magic. We just wanted to see whether you could actually implement his ideas, because if you could it would be even more fascinating."

Read all the papers from the fall 2012 edition of the Journal of Physics Special Topics — including papers on the physics of "Breaking Bad", Spiderman, lightsabers, and Katrina and the Waves' 1983 song "Walking on Sunshine".