Add this one to the growing pile of evidence that the world is slowly transitioning into a sci-fi dystopia: a billionaire entrepreneur with a side-line building space rockets has been showing off piloting a 13-foot-tall robot.

Amazon CEO and fifth richest person in the world Jeff Bezos got behind the wheel (well, dual joysticks) of the bot at the retailing giant's annual robotics conference. He tweeted out the picture above earlier this morning, saying: "I just got to pilot an awesome (and huge) robot thanks to Hankook Mirae Technology." Other conference attendees videoed the event, and Bezos can be seen waving around the robot's arms and asking: "Why do I feel so much like Sigourney Weaver?" Reports that Bezos then told the crowd to "bow down before your new king and master, Metal Jeff" are unsubstantiated.

Bezos was showing the robot off at MARS — an annual invite-only conference run by Amazon and dedicated to machine learning, home automation, robotics and space exploration. The robot is the Method-2, and first came to public attention last December when videos and pictures of the bot circulated online. It's built by a South Korean company named Hankook Mirae, and if it looks like it stepped straight out of a Hollywood blockbuster (it bears a striking resemblance to the bipedal robots in Avatar) that's because one of its designers, Vitaly Bulgarov, is a concept artist who's worked on films like Ghost In The Shell and Transformers 4: Age of Extinction.

This fact and a few others have led some to suggest that the Method-2 is actually an elaborate hoax. (This article from Live Science last December lays out the case.) Certainly we've only seen the bot move its arms and take a few shaky steps, but as this footage shows, the thing itself is very real. What's likely is that the Method-2's mobility is very limited. You can see support chains attached to the bot's shoulders in the video above (presumably in case it topples over); and although its arms are whizzing around incredibly quickly for their size, there's no indication they have any strength. From what we've seen of the Method-2 so far, it's basically a very impressive puppet.

Not that this is stopping Bezos having fun. And who knows, maybe some of Silicon Valley's other impulsive tech billionaires will get in on the giant robot act too. Just think, in 50 years; time we could be hiding in our underground bunkers, sucking down our daily Soylent rations, and watching in 4K VR as cybernetic Jeff Bezos battles Elon Musk's evil clone in a robo-suit equipped with tactical nukes. It's quite possibly the future we deserve. 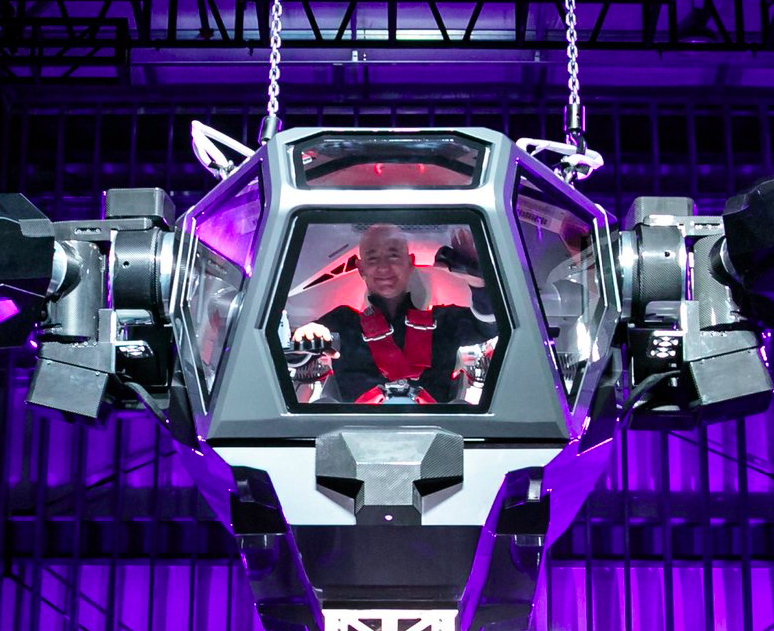