Welcome to "Only the Worst." In this new column, actors talk specifically and exclusively about the most notoriously bad film on their resume.

In 2003, before Bee Movie and our current definition of the word meme, Warner Bros. released a family-friendly proto-meme of a film called Kangaroo Jack. Starring Jerry O'Connell and Anthony Anderson, the movie follows two lifelong buddies as they flee from the New York mob into the Australian outback. The film also stars Christopher Walken and Michael Shannon, as well as a CGI kangaroo that sings "Rapper's Delight" for some reason.

I spoke with O'Connell, a beloved actor likely more used to fielding questions about his seminal classics like Jerry Maguire or Stand by Me, about his time working on the project that Nathan Rabin of the A.V. Club described as "some of the longest 90 minutes ever committed to film."

This interview has been edited for clarity and length.

VICE: When was the last time someone talked to you about Kangaroo Jack.
Jerry O'Connell: It came up yesterday, actually. Young people always come up to me. If they're 20 years old, they come up and it's always about Kangaroo Jack. They probably had a DVD of it. I have children now and I know how they can watch one particular movie ad infinitum. I was at the gym and this guy was sorta hovering. I saw he was making eye contact and could tell he was not hitting on me. I stood up and took my earbuds out and he pointed at me and said "Kangaroo Jack." 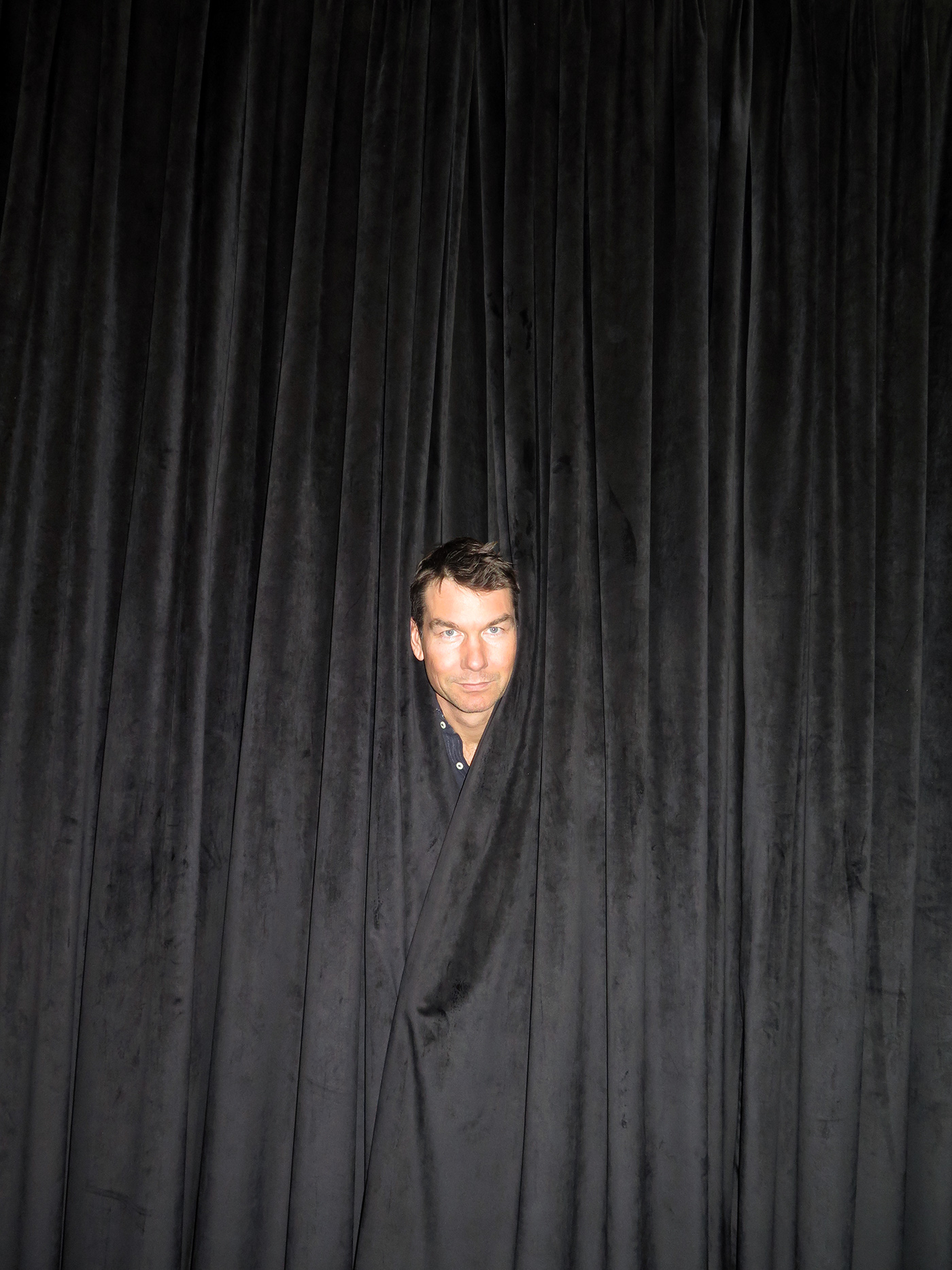 How did you get involved with this project?
It started as a pretty dark spec script [titled Down and Under] about two shitty mafiosos who have to go to the outback. A lot of cursing, a lot of sex, and it was really funny.

Jerry Bruckheimer came on board and, as someone who knows how to make an earning in this business, said "we need to make this a little cleaner."

At what point, if ever, did you have a sense that the project had gone off the rails.
So we made the film, they immediately tested it, and it didn't do well. I thought what a bummer, this was supposed to be my big Bruckheimer-starring film. Story of my life. Back to the drawing board. I guess the fat kid from Stand by Me will have to figure out another way to make it.

And then, a while later, someone called me up and said "I guess they're gonna make this into a kids movie and really heavily animate the kangaroo."

In entertainment, everything changes and you can't hold onto your ideas of what something is because hundreds of other people are working on it. If you read a script and think this is how this is going to be, it's never going to be that way. So, you come in and do your job and then someone else will do theirs.

I remember my representation was like "you didn't get into this to be in a kid's movie" and being all concerned but, to be honest, I didn't really care. I'm still very good friends with Mr. Bruckheimer and some of the producers on it and I didn't see any of them sweating it at all. But Jerry also told me to never read reviews on it so I don't know how it was regarded by the world.

It has an eight percent on Rotten Tomatoes.
Eight?! As opposed to Logan, which got 93 percent? Yikes. What's the general consensus?

Critics seemed to think that it was muddled and there was too much sex and violence for a kids' movies and not enough for a compelling PG-13 caper.
That's interesting. I remember thinking there were a lot of boobs jokes. I guess we were the Deadpool of kids' movies. I suppose we paved the way for Deadpool, which paved the way for Logan. Oh man, please make sure to indicate that I'm joking there.

Did you ever get shit from anyone or feel any negative career impact for being in the movie?
Nah. I don't think most people even know about it, honestly. I've been on stage for UCB's "Asssscat" a few times and nobody's gone there. I think when people have "the fat kid from Stand by Me" card to use, it trumps any Kangaroo Jack stuff.

Speaking of Stand By Me, what do you think your character, Verne Tessio, would think of Kangaroo Jack?
Oh, he'd love it. He wouldn't see any of the inherent flaws you and I do. He'd have the DVD and watch all the extras and eventually come up to me in a 24 Hour Fitness and point at me and say "Kangaroo Jack!"

How long were you on location and what did you get into when not working?
We were there six months and we partied a lot. I was 28. Anthony and I went out every night together. There was a casino in town. I gambled a ton. Actually won a decent amount of money. I don't know what the statute of limitations is but I don't recall if I claimed all my winnings when I came back to America.

Did you bring anything else back from Australia with you?
I did bring back a didgeridoo. Just to let you know how dumb and American I must've looked back then. Imagine me carrying that thing through the airport. I may have also gotten a rainmaker.

What was it like working with Michael Shannon before the world became aware of his talents.
I was able to recognize Michael Shannon's immense talent immediately. I've been a Shannon fan since day one. It was interesting seeing him interact with Christopher Walken because Walken intimidated me, but he did not intimidate Shannon. They'd just go toe-to-toe and you could just tell he was destined for greatness.

There's a recurring theme in the movie where your character, Charlie, has his manhood questioned and is compared to a woman for being a hairdresser or complaining. You also hug Anthony Anderson in a scene and it's stated that you're having a "non-gay moment." As someone who famously bucked gender norms and took a break from Hollywood to be a stay-at-home dad, how do you feel about this movie's take on masculinity in hindsight?
More than anything, that stuff just makes it sound so dated. You repeating those lines back to me, I'm a little shook. I'm ashamed to say that, at the time, I didn't recall thinking those were offensive lines. But, it was fifteen years ago.

Jesus. Did we say anything else offensive?

There's a scene where Anthony Anderson's character claims he struck out a bunch of Taiwanese teens in the Little League World Series and, after that, the "people of Asia" called him "Sun Luc Dong" which he claims translates to "big black man pretending to be 12" but is just gibberish.
Oh, man. I wish I could tell you I tried to protest this stuff but I really just showed up and did my lines as they were written, trying to sell them as inoffensively as possible. I was not one to question these things.

Also, as the father of daughters, I'm going to watch this film with them and hopefully it'll have an educational purpose about what the world used to be like.

There are definitely some teachable moments about consent like when your character jumps in the water with a woman, disregarding her pleas for privacy while she's bathing.
Wow. That's right. Again, different time… but still. I remember there also being a boob-grabbing joke where I go in and squeeze them right when I see Estella Warren and comment on how real her boobs feel.

You probably get a pass on that one because your character thought she was a mirage and not a person with agency.
I remember feeling so awkward touching her breasts in that scene, asking her if I should fake touch them, even referring to them as "her bosom." Unlike that chauvinistic dialogue you just called back to and any other lines that may have offended the Asian community, I was never fully comfortable with inappropriate touching, let alone someone's breasts. I know we did a lot of bad thing in KJ, but I do remember bending over backwards to make sure Estella was cool with the whole grope scene.

Speaking of uncomfortable scenes, In one, apropos of nothing, your character starts beatboxing. Did you just have that skill on deck and they wanted to fit it in the movie somehow?
I'm from NY so I grew up with the older stuff. I'm a De La Soul and Tribe and east coast rap guy so I've always been a fan. And we had all these driving scenes and the cameras would just keep rolling and Anthony and I would just do these raps and they decided to keep them in. I think when they landed on the kid-friendly rapping kangaroo thing they decided to put that in as a way to tie it together somehow.

Can you still beatbox?