As the biggest state fair in the nation, the annual event — founded way back in 1886 — draws an estimated 2.5 million visitors for carnival rides, livestock shows, live music, and an auto show, but the biggest attraction is undoubtedly the food. Every year, the fair's vendors up the ante with a successively more outlandish lineup of (mostly deep-fried) novelty foods: Previous years' standouts have included deep-fried baked potatoes, chicken-fried lobster with Champagne gravy, funnel cake beer, and fried sriracha balls, just to name a few of the oddball offerings.

Here to help us wade through the vast sea of fryer oil and things-on-a-stick is Chef Tesar, sampling eight foods that are brand new to the fair this year. Each item will be scored on a scale from one to five corn dogs: the elusive five corn dog rating means it's on par with the pinnacle of all fair foods, while a measly one corn dog means save your tickets for the Tilt-a-Whirl. 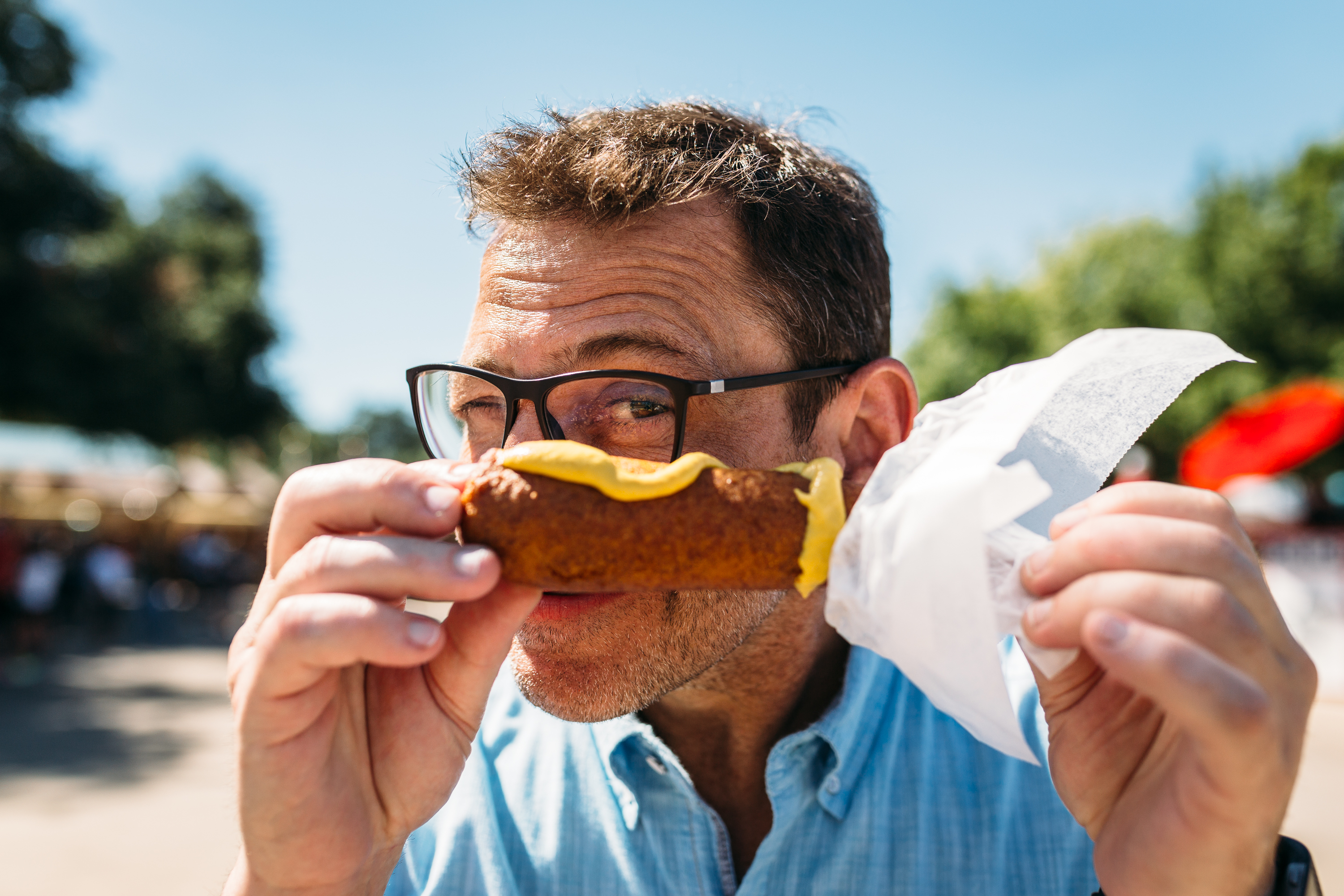 First, an important note: All foods were sampled fresh out of the fryer. A few minutes under the heat lamps can turn even the crispiest deep-fried foods into a soggy, greasy mess — so using charm, flattery, and/or bribery to convince concession stand workers to freshly fry one to order highly advised.

And now, onto the deep-fried extravaganza:

With approximately 8,000 orders sold during the first two weeks of the fair, these deep-fried orbs are shaping up to be one of 2016's biggest sellers. Essentially just shredded smoked brisket that's been breaded and deep-fried, the fritters are impaled with mini plastic pipettes full of barbecue sauce, allowing fairgoers to inject them with said sauce before eating. Creator Glen Kusak says he smokes the brisket himself rather than outsourcing it, which is fairly impressive in its own right when feeding crowds of this size.

For Tesar, they perfectly encapsulate the deep-fried spirit of the fair. "We're at the State Fair — there's nothing better than fried barbecue," he proclaims. "Where's Aaron Franklin when you need him?" He has only one suggestion, which he admits is hyper-critical given the setting: "If the breading could be just one to two millimeters thinner, it'd be an even better experience. But when you're churning out thousands a day, good luck."

As a self-proclaimed "clam chowder snob" hailing from the East Coast, asking Tesar to sample a fried version at the fair was admittedly a bit of a setup. But creator Allan Weiss — who was also the driving force behind the fried guacamole that took the 2013 State Fair by storm — takes his chowder seriously, sourcing it from Maryland rather than making it himself.

Served on a bed of fried clam strips with a side of sriracha ranch, Tesar is impressed by the ingenuity: "It's a little commercial, but it's definitely real clam chowder. They really thought outside of the box, frying soup — and that's a gutsy move, taking on such an iconic dish," he muses. "You could elevate this too, it'd be delicious. That was fun to eat, I could knock that back with a glass of chardonnay."

Though it sounds like a physical impossibility — tossing a mixture of gelatin and water into boiling oil should almost certainly result in serious injuries to humans and/or their kitchen — this weird-sounding concoction has been well-received, snagging the coveted trophy for "Best Taste" at the annual Big Tex Choice Awards that precede the fair. Its inventors aren't spilling the beans on the "proprietary secret" that makes Jello deep-fryable, but did say it was the result of plenty of trial and error and a happy accident or two.

In this case, however, Tesar couldn't disagree more with the judges who came before him: "I'm sorry, but there's nothing redeeming about this at all. It's like a really bad doughnut. If you're on a diet and you're worried about eating too much fried food at the State Fair, just order the fried Jello first. You'll be fine."

Finally, something that's not deep-fried: It's a cup — filled with sugary soda, naturally — that you can eat. (Why you would actually want to is anyone's guess.) Billing itself as the "first and only edible disposable cup," this strange product made by a startup called Loliware promises to be "100% all natural, non-GMO, gelatin-free, gluten-free, plastic-free, BPA-free, non-toxic, and FDA approved" — whew — and also appeared on entrepreneur competition show Shark Tank, where local billionaire and Dallas Mavericks owner Mark Cuban ponied up a few hundred thousand dollars to invest in it.

Tesar appreciates the innovation, but likely won't be plonking down any of his own cash to invest: "It's a work in progress. It's interesting from the imagination standpoint, but it still lacks a lot in execution. I would love to see someone like Grant Achatz or Ferran Adriá take this on and refine the idea," he muses. "The cup itself was stable but it didn't eat very well. If you took Twizzlers and left them in the trunk of your car for three years, that's what the cup tastes like. Maybe Mark Cuban should fund a little more research on this."

Sounding not unlike something created with Eater's State Fair food generator, this one is essentially just an amalgam of several fair food buzzwords: Deep-fried! On a stick! Bacon! Burger! Slider!

Texans love their tacos perhaps even more fiercely than residents of the other 49 states, but merely serving a taco wouldn't befit the fair. Instead, this taco shell is artfully "hand-woven" out of bacon strips before being stuffed with ground beef, shredded cheese, tomatoes, lettuce, and, yes, more bacon. The bacon trend that reached a fever pitch in the early aughts may be dead, but it's still alive and well at the State Fair of Texas.

"It's a little bacon overkill, a little cliché, but the bacon really does mirror a taco shell, and it has real taco flavor," Tesar says. "Way better than Taco Bell. This is the best thing I've had since the barbecue balls — it's really fun to eat."

Sounding like a late-night Jack in the Box drive-thru spectacle that only a stoner could love, this odd concoction involves a mozzarella stick that's wrapped with bacon and crusted with Doritos before being plunged into the deep-fryer.

Weirdly, a combination that sounds like it'd be an assault on the tastebuds turns out mostly flavorless. "I don't know how you take all these ingredients and make it taste so ambiguous," Tesar wonders. "It's like the Doritos and the bacon somehow just cancelled each other out. It's amazing. You don't get Dorito flavor until like 15 minutes after you eat it. This is ambiguity on a stick."

What, pray tell, is a "Funyun ding"? This creation combines the crunchy onion-flavored snack food with pulled pork, pepper jack cheese, pineapple, and bacon, and then, naturally, throws it all into the deep-fryer. Slices of mercifully un-fried pineapple are served on the side, though we didn't see anyone actually eating them. (Conveniently, these are sold at the same booth as milkshakes that have an entire slice of pie blended into them.)

"Ridiculously unctuous and crazy," Tesar proclaims. "This is one of those things that tastes really good, but you just know it's really bad for you. It's decadent. This is probably the most balanced culinary experience I've had at the fair." In fact, he liked it so much, he suspected it may have been spiked with something: "What is this sprinkled on top of the sauce? Is that molly?" (It's not.)

After the fried Jello debacle, it seemed only fair to go for dessert round two — and as a born-and-raised New Yorker, getting Tesar to eat a deep-fried version of an iconic Italian-American dessert just made sense. Instead of being stuffed into a cannoli shell, ricotta studded with citrus zest and mini chocolate chips is battered and deep-fried, then assaulted with powdered sugar and chocolate sauce.

Tesar approves: "They've taken the creativity of the State Fair and turned it into this fried sphere, but it actually still has the essence of a cannoli. It's not Arthur Avenue, but as State Fair desserts go, this is excellent."

And so this concludes another year at the State Fair of Texas. What will they deep-fry next year — Skittles? Ranch dressing? A literal kitchen sink? In the meantime, Tesar's probably headed for a juice cleanse. 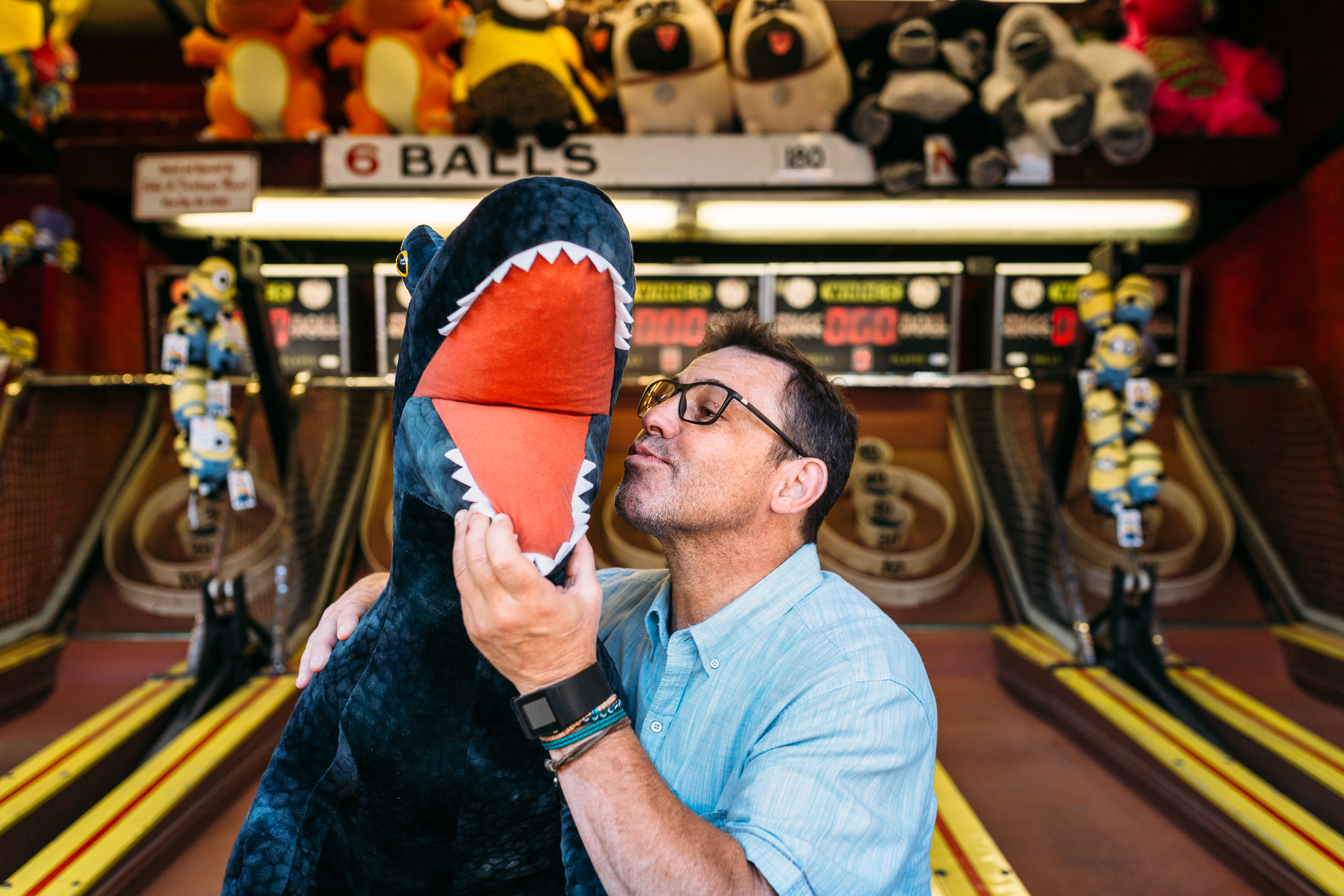