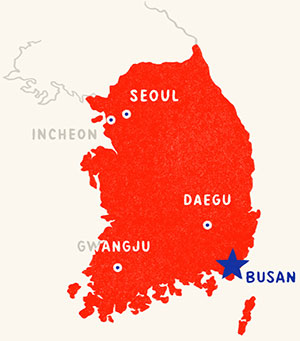 THE SEASIDE METROPOLIS of Busan is home to the Lotte Giants, a team famous for its zealous fans. On a sticky July evening, thousands of them file into Sajik Stadium, a concrete bowl surrounded by high-rises. After surveying the field, I decide to skip the Camping Zone (an outfield seating area with tents) and the Exciting Zone (along the first-base line) and sit in a section dense with fans wearing headbands with a little seagull — Lotte's mascot — fastened like antennae. When the game begins, they're quietly munching on dried squid and sliced pig feet. Aside from the snacks and signs, the scene feels similar to an MLB outing.

Then, halfway through the first inning, everything changes.

As the home team prepares to bat, four women wearing luminescent makeup and denim microshorts strut onto a raised platform. They look like K-pop stars. A small, spry man wearing a Lotte uniform — the "cheermaster," I later learn — hops out in front. As someone bangs on a traditional drum, he lifts a bullhorn and starts bouncing, clapping his hands wildly. When the Giants' leadoff hitter, Son Ah-seop, emerges from the dugout, loudspeakers start blaring music, and everyone around me rises, performing the same dance and chant: 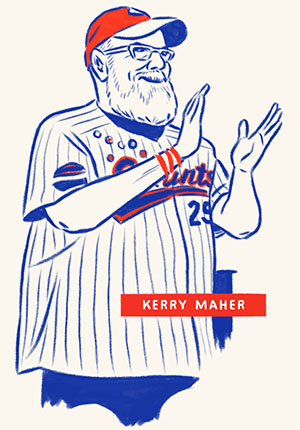 Throughout the game, the fans perform a variety of coordinated moves: tomahawk chops, gentle thrusts, wax-on, wax-off hand motions. Several of them follow the lead of a burly, bearded American wearing a Giants jersey. His name is Kerry Maher, and he's attended every Giants home game since moving here a few years ago to teach at a rural university, becoming something of a local celebrity. "They call me Lotte Grandfather," he says. "Now everywhere I go, I'm stopped."

The entertainment is relentless. After high school girls perform in a dance competition called "Giants Idol," the LED stadium lights abruptly shut off and everyone raises a cellphone, forming a flickering mass. Later, a silent army of workers distributes thousands of orange plastic bags, which the fans inflate into balloons and tie to their heads like billowing hats; from above, the crowd must look like an ocean of buoys. At the end of the game, everyone unties the bags and uses them to clean up trash.

A few years ago, my translator says, a drunk fan climbed the foul pole at Sajik Stadium and refused to come down. The team no longer allows liquor to be brought in, but the fan base still feels rowdier, and younger, than the typical MLB crowd. The seats are packed with 20-somethings, many of whom are women; my section stands for the entire game, screaming and dancing until the end. "I tell everyone: 'MLB is like opera, and KBO is like rock 'n' roll,'" Maher says.

Early in the game, LMFAO's "Shots" comes on, the designated song for Choi Jun-seok, a slugger whose girth puts Bartolo Colon's to shame. As the crowd dances (Choi's routine involves finger guns), he steps to the plate and lifts his bat above his head, then slaps a routine grounder up the third-base line.

He flips his bat.

After Choi is thrown out and lumbers back to the dugout, I watch to see if he's embarrassed — he isn't — then glance at the fans sitting around me. Did anyone just see that? No one reacts.

A few at-bats go by. Then, in the third inning, it happens again: Kim Ho-ryeong, an outfielder on the visiting Kia Tigers, flies out to center field … and flips his bat. Na Ji-wan, a slugger on the Tigers, smacks a two-run homer … and flips his bat. His teammate, Kim Joo-chan, flips his bat after a double. As the game progresses, the bats keep flying, sailing toward the on-deck circles like footballs spiraling out of a Jugs machine. The pitchers barely blink.

THE NEXT DAY, I arrive at the stadium a few hours before the rematch and spot an American lingering in the dugout. Josh Lindblom, one of the Giants' pitchers (teams are allowed to roster three foreigners), is a lanky, affable 29-year-old from Indiana. A second-round draft pick by the Dodgers in 2008, he bounced around the majors for a few seasons before landing in Korea last year.

Lindblom and I sit in a stairwell just outside the locker room, shouting over the wails of a Korean girls choir. I ask about the flips. "The first year — I don't think I was pitching — I saw somebody do it and I was like: 'What was that?'" he says. "Somebody told us it might happen. 'Don't freak out. Don't get mad. It's just what they do.'" Lindblom says he doesn't know why Korean hitters flip so often, or why some do it and others don't. "I don't even notice it anymore," he says. "It happens so much, I'm like, whatever."

Over the course of two days, I interview players on both the Giants and Tigers, many of whom, I'm told, rarely speak to the foreign media. The Tigers' bench coach, Cho Gye-hyun, is a former pitcher in the KBO. He tells me bat flips have never bothered him because he believes players don't do them on purpose. "It's natural," he says. "They don't have time to think about bat flips; they're thinking about hitting the ball."

When I mention I've seen KBO players wait a few seconds before flipping their bats — pimping their hits, in American parlance — Cho scrunches his nose. "It's a habit," he says. "It grows in them from elementary school."

While some hitters take batting practice (notably, no one flips his bat), I camp out in the dugout and wait. Eventually, Kim Joo-chan, who at 35 is one of the Tigers' oldest players, grabs a water bottle and sits down. I tell him that I've seen clips of his celebrations, and Kim shrugs impassively. "It's just spur-of-the-moment," he says. "I'm not aware that I'm doing a flip." He tells me to interview his teammate Lee Bum-ho.

A few minutes later, Lee, who has a round face and a warm smile, plops onto the bench. When I bring up bat flips, his grin disappears. "I don't realize that I'm doing it," Lee says. He pauses for a moment, searching for an explanation. "Asian players — we have to put our full strength into the swing." He pantomimes a vicious hit, his wrists contorting as he pretends to release an imaginary bat after contact. "That's why the bat flips come out." (A month later, Kurtz will tweet a video of Lee flipping a bat after a walk and inadvertently hitting the umpire.)

I ask Lee if he flips his bat to impress his dancing, chanting fans, and he shakes his head. "I don't pay attention," he says. "I don't know why." He tells me he isn't the best flipper in the league. That's Choi Jun-seok, the slugger for the hometown Giants. "Choi is the person who throws it the farthest. He uses his whole body."

And so I find myself face-to-face with Choi, who is sweating profusely after taking a few practice swings in the boiling heat. Up close, I can see he's wearing a small hoop in one ear. As he mops his face with a towel, I lob a few questions: Do you do anything special for your fans?

What does it feel like when you flip your bat?

"I'm not doing it on purpose, so I don't have any feeling."

Are you aware that people overseas enjoy your flips?

After a few minutes, my translator thanks Choi for the interview. We all bow.

Before the game begins, I leave the stadium and meet up with Ryan Sadowski, a Lotte scout from Los Angeles who pitched for three years in Korea after a stint with the San Francisco Giants. Over a boiling pot of chicken, Sadowski tells me he enjoys the jubilance of Korean baseball. Players don't just revel in their hits, he explains, they also celebrate after defensive plays. "It's just a totally different culture," he says. "I found that as a player I didn't allow myself to enjoy my success the way I should have because it's the game of baseball. You're not supposed to show that you enjoy your success. I think it's something I learned here, that I would take to younger kids in the States." I tell him about my interviews thus far, describing how the players insist that the flips aren't intentional and that they take no joy in them, despite visual evidence to the contrary. Sadowski doesn't seem surprised.

"If they were to admit it … they won't admit it to American reporters," he says.