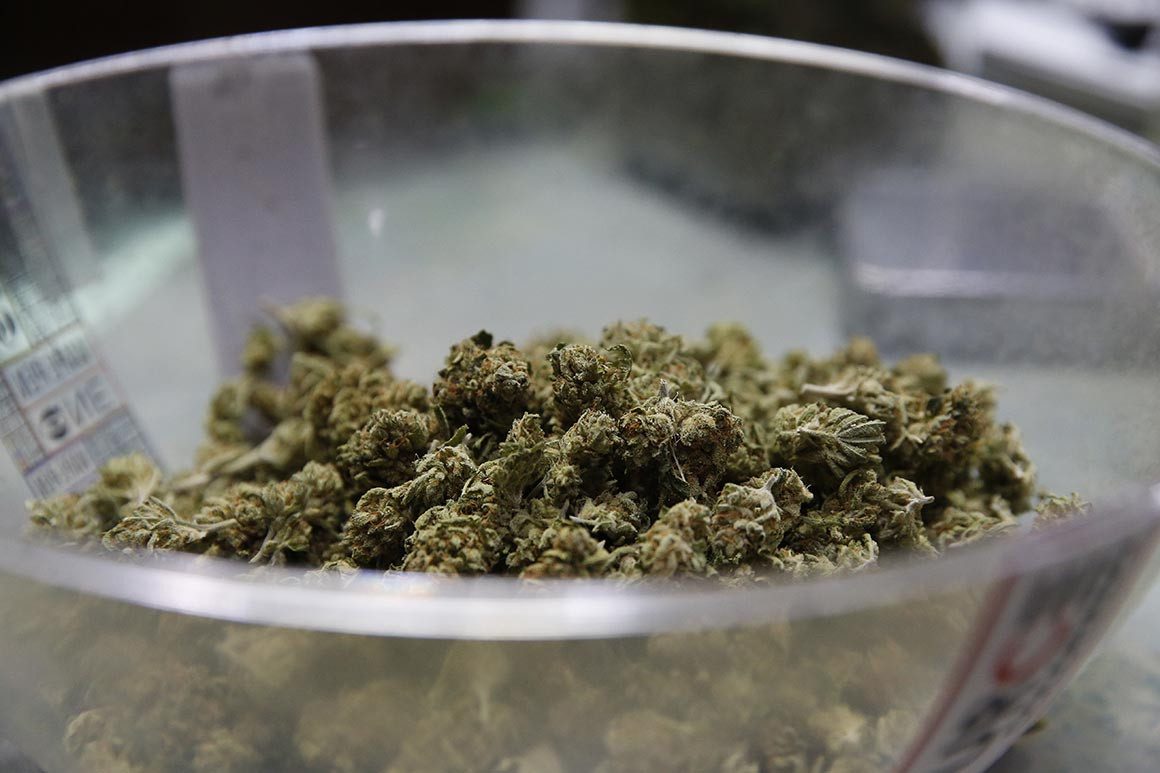 Americans can legally buy high quality marijuana in most states, but when scientists want to study pot in a lab, they're basically stuck with schwag.

A little-known research facility at the University of Mississippi is the only place in the country that is authorized to grow and test marijuana for medical research purposes. But this effort is stymied by a slow process for certifying scientists, a lack of funding and according to pot experts, an inferior product compared to what the booming cannabis sector has rolled out in recent years.

"It's brown, muddy garbage," said Peter Grinspoon, a physician and board member of Doctors for Cannabis Regulation, describing the Mississippi stock.

Meanwhile, 33 states now allow medical marijuana, including 10 states and the District of Columbia, which have taken further steps to decriminalize or legalize pot for recreational use. This major disconnect between the federal government's oversight of marijuana and the blossoming of a robust consumer market for cannabis products has real world consequences: Legitimate medical research into the impact of cannabis on everything from anxiety to Parkinson's disease is not only slowed down — scientists don't even have a product that matches real-world use.

The DEA insists it supports medical marijuana research, but it has resisted calls to reclassify the plant so it's not lumped in with addictive drugs like heroin and ecstasy. When the DEA did in 2016 take steps to expand the supply for scientists, then-Attorney General Jeff Sessions withheld final approval. Several bipartisan bills aimed at expanding research were introduced in the outgoing Congress, but none made it through.

And now researchers and lawmakers say advocates' campaign to fully legalize marijuana is outpacing the drive for better science.

"It's almost a catch-22," said Staci Gruber, a Harvard neurologist studying cannabis-based medicines as a treatment for anxiety. "These products are widely available to the public. But as clinical researchers, we can't administer one drop in a clinical trial."

The sweeping Agriculture Improvement Act of 2018, H.R. 2 (115), — better known as the Farm Bill, and signed into law by President Donald Trump on Thursday — legalizes hemp production and with it, potential sales of cannabidiol or CBD, a component of marijuana and hemp plants that has no psychoactive properties to get people high. It's said to have anti-inflammatory and calming benefits, but questions about medical effectiveness remain.

CBD is one of more than 100 cannabinoids in marijuana plants, which remain illegal under federal law even though so many states have liberalized the rules. The other key one identified as having healing properties is THC, which does get people high. Some preliminary studies suggest both of these marijuana components, and possibly many others, can help with ailments ranging from multiple sclerosis and Crohn's disease to anxiety and post-traumatic stress disorder.

The initial signals have bred hope that much more could be in store: an alternative to opioids for pain, treatments for autistic children and even cancer therapy. But the evidence is still thin — even though more and more people are using marijuana as medicine for all sorts of ailments and conditions.

Outside of the government-sanctioned pot farm, the DEA has approved one importer to ship marijuana for a single study. As a range of smokable, edible, infused and ever-more-potent pot products hit the consumer market, Mississippi's stash looks increasingly limited.

And it's not easy for medical researchers to access even that maligned marijuana. They have to get FDA approval for their proposed study, and undergo DEA checks for required safeguards, like having a limited-access room with a top-notch storage safe for the drug.

Only eight researchers cleared that bar in 2010. The number has increased modestly since then, to 20 researchers in 2017 according to the National Institute on Drug Abuse, which manages the Mississippi contract.

Even then, meeting the DEA laboratory requirements is costly and gaining approvals for new studies — including for researchers who have previously been verified — can take up to a year, Johns Hopkins psychiatrist Ryan Vandrey wrote in aletter to senators calling for change.

But the states' focus is shifting to full legalization in ways that make it harder to stick to the research agenda. In fact, some legal pot advocates say research bills are a stall tactic by the federal government. Focusing on medical barriers — and not rescheduling the drug or doing a more comprehensive criminal justice reform than the recently passed First Step Act, H.R. 5682 (115), — could slow marijuana's state-grown momentum.

Pot advocates want a Congress flush with new House Democrats to "go for the jugular on this issue," as Michael Collins, director of national affairs for the Drug Policy Alliance, put it.

But some lawmakers want to keep the science on the table — including Sen. Brian Schatz (D-Hawaii), who also back broader legalization measures.

"The most important next step is to allow the FDA to properly measure and study the efficacy of marijuana," Schatz told POLITICO. "There is an abundance of anecdotal evidence and even some clinical evidence that this is worth pursuing."

Schatz is the co-sponsor of the MEDS Act, S. 1803 (115), a bill introduced in 2017 to lower research barriers like cumbersome, sometimes redundant requirements between DEA and FDA. Retiring Republican Sen. Orrin Hatch (R-Utah) had been the lead co-sponsor of that bill, but Schatz said other Republicans such as Cory Gardner (R.-Colo.) and Thom Tillis (R-N.C.) are also co-sponsors so it has bipartisan backing.

The sanctioning of CBD products through the farm bill may turn up the pressure on medical claims. Concerned by the vast health claims being made around CBD and other cannabis-derived products, the FDA is convening a public meeting soon, Commissioner Scott Gottlieb said in a statement when that bill was signed.

FDA is ready to look at marketing rules and how the agency can make legal pathways more efficient for CBD and cannabis-derived products like GW Pharma's Epidiolex — the first FDA-approved cannabis-based drug, which treats a specific form of epilepsy — to come to market, Gottlieb said.

More cannabis-based drugs could being coming down the pipeline. While pharmaceutical companies did not see a ton of incentive in marijuana research in the past because it's already readily available to people, GW Pharma is followed by companies like Zynerba Pharmaceuticals, developing a topical cannabis gel — and pharma giants like Novartis, which recently inked a worldwide partnership on marijuana distribution.

"I am certainly not in favor of legalizing marijuana, of rescheduling it, but I do want to make sure we do research so that policy decisions are evidence-based," Adams said.

That stance puts Adams and other regulators at an impasse with many researchers. Marijuana's Schedule I classification — the highest-risk category for drugs with "no currently accepted medical use and a high potential for abuse," like heroin and LSD — makes buying, storing and studying the drug extraordinarily difficult. It also means that even when the FDA approved a cannabis therapy — like that epilepsy drug — the DEA has a say in whether it can be sold and shipped.

"We're not suggesting that everybody should have unlimited access to everything all the time," said Gruber, the Harvard neurologist studying cannabis and anxiety. "But it seems rather incomprehensible that we don't have the ability to access these things."

Anti-legalization advocates have floated another idea: create a special breakout section of Schedule I drugs, just for marijuana research.

That could be a bridge between staunch pot conservatives who shared former Attorney General Session's hostility and those who favor more lenient restrictions or full legalization, said Kevin Sabet, a former adviser to the White House Office of National Drug Policy, whose group Smart Approaches to Marijuana opposes full legalization.

That's exactly what pro-pot advocates are worried about.

"What they're doing is stalling for time," Drug Policy Alliance's Collins said. "The momentum is behind our movement and I think they are trying to grab on to any life raft that will save them from being swept under."