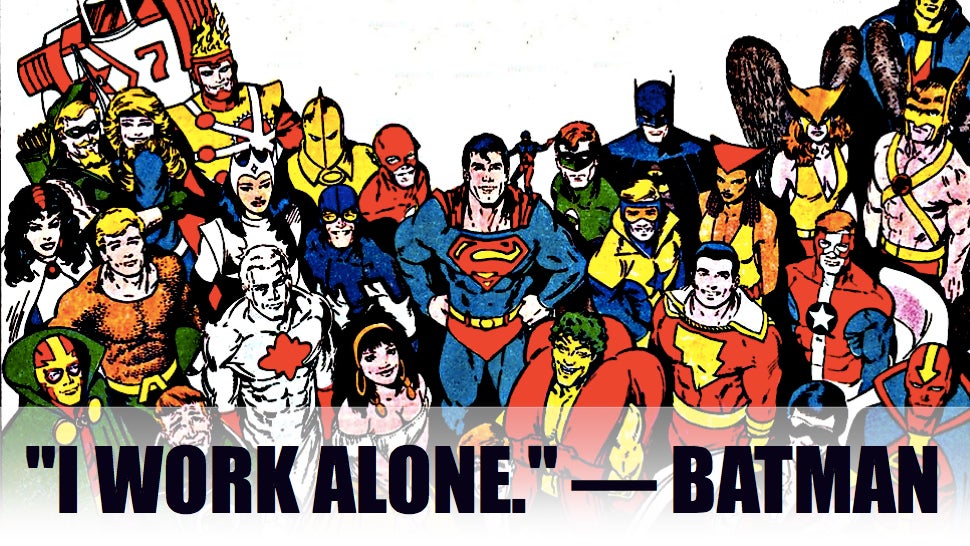 Everybody loves a cool loner. A lone wolf. A man or woman who doesn't play well with others, and who spouts off phrases like "I work alone" and "Other people just slow me down." But for some reason, those cool loners just can't quit joining teams. Here are the "loners" who can't seem to do anything on their own. Like, ever.

Batman sort of defines the "cool loner" archetype, and "I work alone" is his catchphrase. (Except in Batman and Robin, when he tells his two sidekicks, "This is why Superman works alone.") Batman is a gritty creature of the night, who sees other crime-fighters as liabilities, and he lurks in the shadows by himself.

Except for all the teams he's frequently on.

Group Affiliations: Justice League, Batman and the Outsiders, Superman/Batman, the Batman Family, Batman Incorporated, and a zillion "Brave and the Bold" teamups.

Seeing as how Logan is the best at what he does, who needs anyone else? Wolverine is also known for being somewhat of a wild man. He thrives in the solitude of the natural world. And, like Batman, Wolverine has lost almost everyone that he loves. No wonder this guy is such a loner. Yet, of this group, he's joined more teams than anyone else.

Faith came into the violent world of slaying from an abusive and traumatic background. And Slayers are supposed to be solo monster-killers in any case. But Faith really works it. Buffy even says to Faith in "Bad Girls," "You've got your tough loner act down pretty well." But at the same time, Faith gloms onto first Buffy, then the Mayor, then the Angel gang, as her new friends. And later, she actually challenges Buffy's leadership of the Slayer Gang.

Riddick is a predator, a convict, and the last of his kind. He keeps to himself, and doesn't seem to trust anybody. Riddick is used to dangerous situations, and sees other people as dead weight. At least that's what he would have us believe. But sometime he reaches out and helps when he can. While he doesn't exactly join a group of superheroes, he does begrudgingly help others, forming his own groups along the way.

Group affliliations: The survivors in Pitch Black, including Jack and Imam, The Necromongers, and the group of survivors in Riddick. He was also a part of a security force and a soldier.

After the woman he loved "died," Avon could never trust anybody again. Every other word out of his mouth is about how trust is a mistake and other people are a waste of time. Except that even when he has the chance to abandon Blake's crew, he doesn't. And later, he actually becomes their leader, sort of. Kind of.

Grifter was left disillusioned by the corrupt people at I.O. His mind was messed with and he was forced to do things he never imagined he would ever do. No wonder this guy was such a loner. He was betrayed and forced to make some hard calls (Like killing his Team 7 teammate). His powers were given to him and in turn made him go crazy. Forced to go into hiding he fell in love kheribum warrior Zealot and given sanity through the Coda. He was then an on-again-off-again member (and leader for a bit) of the Wild C.A.T.S. Which repeatedly put him at odds with his own moral codes.

This whole team, individually and together, deserves mention. They're called a "non-team" and they constantly mention in every issue that they don't belong together and have no reason to team up. Ever. It's always with the most extreme reluctance that the arrogant Namor, the mercurial Dr. Strange, wandering behemoth The Hulk, and the lonesome spacer-farer Silver Surfer join forces over and over and over. Plus when they're not in the Defenders, you'll frequently find these people in the Avengers and other teams.

Group affiliations: see most of the Marvel Universe

When we first meet Garak, he seems to be nothing but a simple tailor. We later find out that he is an exiled spy and ex-member of the Obsidian Order. He is tough and to-the-point about his opinions and especially when it comes to guarding his past. Garak is a true loner on DS9, as he keeps to himself and keeps his loyalties a secret. It is only after he forms a bond with the crew that he throws himself headlong into helping the Federation.

Group Affiliations: The Obsidian Order, the Crew of DS9

Frank Castle lost his entire family to gangsters. He then lit a blaze of fury, taking no (or very few) prisoners in his war on crime. This put him at odds with all the lawful-goods out there, which really means nothing to him. Like Riddick, Castle sees others as just getting in the way, especially when they try to force their own sense of right and wrong on his mission. Like many of the people on this list, his code is number one, and if anybody gets in the way, tough.

Rorschach doesn't give a shit about anything but his own set of moral parameters. However he was willing to meet up and possibly join the Crimebusters, as well as fight crime along side heroes in The Watchmen universe.

Other honorable mentions — Moon Knight, Mad Max, Everyone in the Sin City Universe, and a pretty fair amount of anything Rob Liefeld ever created.

I work alone for the most part, so who did I miss? I guess I'm saying, I'd like to join some kind of team. Let me know in the comments!