There was a point in time, before colonization, when the San Francisco Bay Area was dominated by a people with a way of life and philosophy that did not revolve around technology or technological improvement.

Five hundred years ago, this swath of northern California was populated by the Ohlone peoples, about 10,000 of whom lived in the stretch of land that we call the San Francisco Bay Area. So rich in plant and animal life was this region that the Ohlone were able to survive without farming or animal domestication; indeed, western explorers, when they eventually arrived, were amazed at the quantity of wild animal life.

The Ohlone lived off acorns from all the different varieties of oaks, blackberries and gooseberries, chia, shellfish and the roots of many plants. They hunted squirrels, rabbits, elk, bear, whale, otter and seal. They did not "farm" in the western sense of the word, though they had a complex knowledge of how to use controlled burns to cultivate plant and animal food sources.

Though they are called Ohlone now, at the time they did not think of themselves as a contiguous group: There were at least eight different languages between their small tribelets, each one spoken by about a thousand people. One might walk 20 miles and be unable to understand the local tongue. Their laissez-faire social relationships were alien to the hierarchy-obsessed Spanish missionaries, who commented that 'in their pagan state no superiority of any kind was recognized'.

Likewise, the Ohlone lived in a communal society - which vaguely resembled a gift economy - that shocked the missionaries. "They give away all they have… [and] whoever reached their dwelling is at once offered the food they possess," one missionary said. There was no obvious form of government. Status and competition were not important to the Ohlone; generosity and family were. This led early missionaries, who were subject to powerful European governments, to conclude that the Ohlone lived in "anarchy". 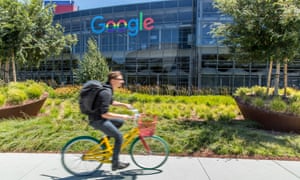 'There was a point in time, before colonization, when the Bay Area was dominated by a people with a way of life and philosophy that did not revolve around technology or technological improvement.' Photograph: JasonDoiy/Getty Images

The Ohlone peoples had a very different relationship with animals than the Europeans. Predators like foxes, bobcats, mountain lions and coyote were plentiful, yet coexisted peacefully with the Ohlone. "Animals seem to have lost their fear and become familiar with man," said Frederick William Beechey, an English captain. It has been suggested that as the European colonizers openly hunted and killed easy game over several generations, animals adapted to the presence of gun-toting hunters and learned to keep their distance. "We take it entirely for granted that animals are naturally secretive and afraid of our presence," wrote historian Malcolm Margolin, "but for [the Ohlone] who lived here before us, that was simply not the case."

In the late 18th century, the newly-arrived Spanish quickly set up missions in California, and began forcibly taking Ohlone subjects into the missions - ostensibly to convert them. Yet the Ohlone were held against their will and forced to labor for the Spanish, who separated men and women, lashing and hitting them when they refused to act as the missionaries pleased. One firsthand account describes the Spanish missions as indistinguishable from slave plantations.

In addition to violence against the Ohlone, the missionaries brought measles and other diseases with them, which killed many Ohlone independently. Various epidemics in the 1790s killed hundreds at Mission San Francisco and Mission Santa Clara. And over the course of the 19th century, the native population of California dropped from an estimated 310,000 to 100,000. This mirrors what was happening in the rest of North America: there were an estimated 10 million American Indians living "north of Mexico" when Columbus arrived, a number that eventually fell to less than one million.

As the Spanish established their Missions, they also imposed their technological ideals on the land. By 1777, Mission Santa Clara (in present-day Santa Clara, California, now home to the Intel Corporation) had a farming and livestock operation that included pigs, chickens, goats, roosters, corn and wheat, mostly nonnative species. Despite re-shaping the landscape to their technological whims, the missionaries were surprised at how the Ohlone continued to "nourish themselves" on acorns, trout, and other wild harvests. The Spanish did not understand why the Ohlone did not have reverence for their "superior" systems.

"For one who has not seen it, it is impossible to form an idea of the attachment of these poor creatures for the forest," wrote Basque missionary Fermín Francisco de Lasuén. "[Outside the Mission] they are without a roof, without shade, without food, without medicine, and without any help. Here they have all of these things to their heart's content. Here the number who die is much less than there. They see all this, and yet they yearn for the forest." It was unfathomable to missionaries like Lasuén that the Ohlone might prefer a world without the rigid hierarchies and controlling attitude towards nature that the Europeans possessed. 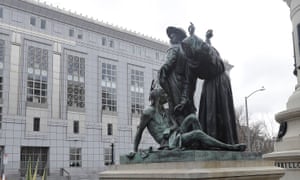 A statue depicts a Native American at the feet of a Spanish cowboy and Catholic missionary in San Francisco. Missionaries brought measles and other diseases, which killed many Ohlone. Photograph: Jeff Chiu/AP

The differences between the Ohlone and the Spanish ways of life reveal the contradictions inherent to our present-day idea of "technology". To borrow the Silicon Valley business-speak of today, who possessed more advanced technology? The Ohlone or the Spanish? Who was more innovative? The deep knowledge of the maintenance of the landscape, and the communal lifestyles enjoyed by the Ohlone, meant that the Bay Area remained in a relatively stable ecological state for a thousand years. The incursion of the colonizers disrupted this; they imposed their technological whims and their agricultural logic on the landscape and enslaved and exploited the Ohlone. You can no longer survive in the Bay Area on acorns and wild trout and blackberries, as the Ohlone did; much of the plant and animal life has been extirpated to make way for Western civilization.

Hence, the notion that the Spanish were more "advanced", technologically-speaking, is arguable. As I write this in 2018, I am reminded of a recent news story about a newly-released consumer product called the "Juicero." The Juicero is a $400 so-called "juicer" whose parent company is backed by $120m in investment capital, including money from Google. It is a wifi-enabled juicer that connects to the internet to inform you of your juice's origin as you drink.

Despite being termed a "juicer", it doesn't really juice anything; you can't drop a carrot, apple, or orange inside it. It can only make juice by wringing out proprietary, pre-sealed packages shipped by the company to consumers. A mini-scandal erupted after a Bloomberg reporter discovered that one could use one's hands to wring juice out of the proprietary juice packs, and fill a glass with juice much faster than the machine can.

Shortly thereafter, the company ran out of money and shut down. 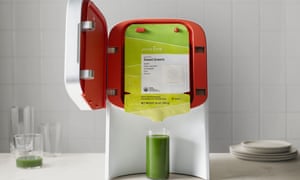 Despite being termed a "juicer", the Juicero doesn't really juice anything; you can't drop a carrot, apple, or orange inside it. Photograph: PR company handout

Human hands are not generally thought of as particularly high-tech. But in this case, they were, from a technological standpoint, superior to the $400 Juicero.

The Juicero saga attests to the fact that sometimes technology doesn't make us more advanced, or intelligent, or make our lives better or faster at all. Sometimes it merely makes us dependent on new, more resource-intensive systems, while casting aside those that are incompatible with so-called economic logic.

While the overall number of Spanish missionaries in California had been small, American settlers began arriving in droves in the 1840s.

The American settlers were cruel and genocidal towards the remaining Native Americans, perhaps more so than the Spanish or Mexicans. As one historian wrote, the American incursion into California marked "one of the last human hunts of civilization, and the basest and most brutal of them all". There are still some alive today who personally knew those involved in the slow-moving genocide of the Ohlone and other native groups.

My grandfather, still living, who grew up in the Bay Area in the 1920s, recalls as a child hearing adult men talking about heading out to the woods to hunt (read: murder) American Indians. It is not as distant an era as we might think.

So it went that over the course of a century, the indigenous Ohlone peoples - and other American Indians of California - were killed and displaced as the Spanish, Mexicans, and later Americans, rebuilt California into an edifice of Western society.