Thousands of municipalities all over Japan have their own mascots, typically designed to reflect local produce, wildlife, or landmarks. In many cases, they create a bizarre hybrid of all three. Chris Carlier

Like local sports teams or favorite regional dishes, these weird, lovable characters are now an indelible part of the identities of a generation who cannot imagine their hometowns without them.

In April, the mayor of Mizumaki posed for pictures beside a rotund figure with a giant garlic clove for a head. This was the unveiling of Mizumaro, the town's new mascot and the latest of many gotōchi-chara ("regional characters"). Mizumaro showcases a local point of pride, in this case the peculiarly large garlic cloves grown in this part of southwest Japan. Even though Mizumaki has a population of less than 30,000, the local government decided the town ought to have its own mascot. After all, it is less strange for a Japanese town to have a garlic-headed mascot than to have no mascot at all.

Thousands of municipalities all over Japan have their own mascots, typically designed to reflect local produce, wildlife, or landmarks. In many cases, they create a bizarre hybrid of all three. Cartoon images of these characters enliven posters and street signs, while roly-poly costumed incarnations waddle around summer festivals or hand out prizes in schools. They promote tourism, generate revenue from memorabilia sales, and are a source of regional pride. 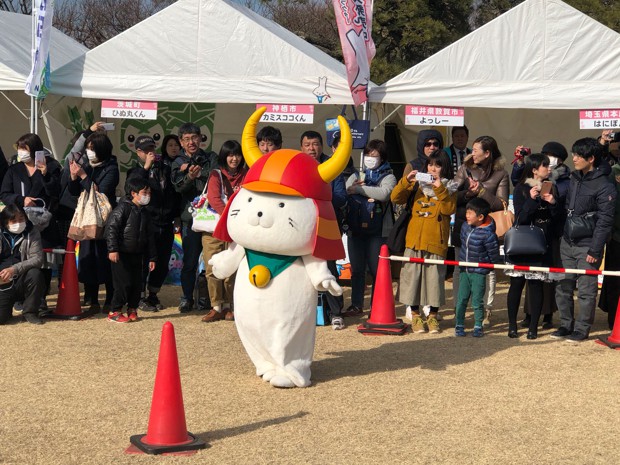 Hikonyan proved to be a cash cow for its city, raising billions of yen from merchandise and tourism since its creation in 2007. Soon, other cities wanted to do the same. (Chris Carlier)

The craze for gotōchi-chara began in 2007, when a samurai cat named Hikonyan was introduced to celebrate the 400th anniversary of the founding of Hikone Castle. The character, a fluffy white feline in a horned helmet, soon gained national attention, attracting flocks of tourists to the city of Hikone hoping for a selfie with the superstar cat who made daily appearances on the castle grounds. Hikonyan proved to be a cash cow for the city, raising billions of yen from merchandise and tourism. Soon, other cities wanted to do the same.

Kumamon, a cuddly black bear-like creature from Kumamoto Prefecture, has achieved even greater stardom since. Created in 2010 to coincide with the introduction of a new bullet train, the character has become as ubiquitous as Mickey Mouse in Japan. Part of that success comes from the decision to let anyone use Kumamon's likeness for free. As a result, Kumamon's face now appears not only on trains, but also dozens of products easily found in any store or online. The superstar mascot's publicity stunts are rarely out of the news; he is seen shaking hands with a governor one day, and bungee-jumping the next. He has even become well-known overseas, especially in China. When a deadly, magnitude 7 earthquake struck Kumamoto in 2016, "Pray for Kumamoto" messages on social media were often accompanied by images of Kumamon. After the disaster, the beloved bear-monster made appearances at events all over Japan in a campaign to raise money for the reconstruction, solidifying his status as a national treasure. 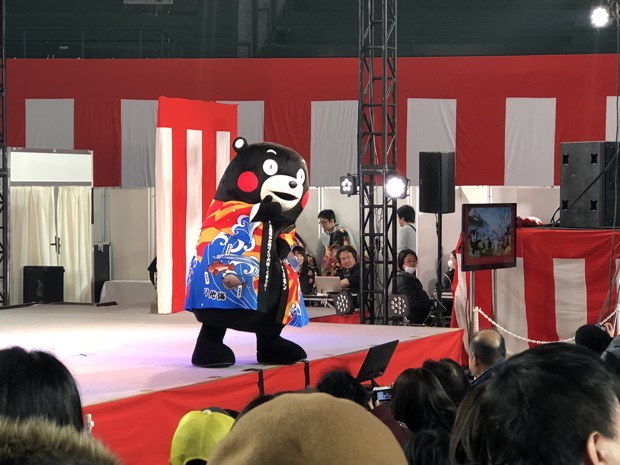 Created in 2010 to coincide with the introduction of a new bullet train, Kumamon has become as ubiquitous as Mickey Mouse in Japan. (Chris Carlier)

Every prefecture, city, and village wants a Kumamon of their own. By 2015 there were 1,727 characters entered into the Yuru-chara Grand Prix, an annual mascot popularity contest. Many of these gotōchi-chara originate from designs submitted to contests by members of the public. Garlic-headed Mizumaro beat out 1,078 other submissions to become the mascot of Mizumaki. Some of the most charming characters are based on the doodles of children. An 8-year-old drew the mascot for the popular ski resort village of Hakuba, a winged white horse with a human face. The character's lengthy name, Victoire Cheval Blanc Murao III, was also picked from public suggestions. Asking the public to choose mascots themselves is not without its risks. When Hokuto, a city in northern Japan, held an online mascot election in 2013, pranksters got a googly-eyed lump of sushi named Zuuushiiihokkiiii voted in. Now, citizens of Hokuto are confronted daily with images of the goofy, spindly legged creature.

With legions of other gotōchi-chara to compete with for attention, mascots have to be inventive in order to stand out. Oji, a city in southern Japan, upgraded its beloved white dog mascot, Yukimaru, last year by building a new model of the pooch around a quadcopter. Now Yukimaru, based on the pet of a 7th century prince, flies like a drone over the streets of Oji and delights the tourists.

The crime rate is so low in Japan that even police funds can be spent on fuzzy mascot costumes. The city of Gifu alone has 10 police mascots.

Other tech-savvy characters have their own regularly updated Facebook and Instagram accounts and make money by selling sets of stickers on the popular SNS app, Line. Chiitan, an accident-prone otter with a tortoise for a hat, has amassed over 400,000 Twitter followers in less than a year by posting daily videos of hilarious pratfalls which invariably end with her long-suffering tortoise toppling from her head.

Municipalities do not limit themselves to one mascot. Larger cities often have dozens, one for each ward or district, and others for various areas of public infrastructure—schools, fire services, hospitals, sewers, or taxes. The crime rate is so low in Japan that even police funds can be spent on fuzzy mascot costumes. The city of Gifu alone has 10 police mascots, including a heron-headed reformed criminal named Warusagi-kun, and Damesarencon, a giant lotus root who warns against fraud. Even such forbidding institutions as prisons have mascots, in order to make their community presence less intimidating to local children. Wakayama Women's Prison, for example, is home to a six-foot-tall mandarin orange named Waka-P (an abbreviation of the prison's name). 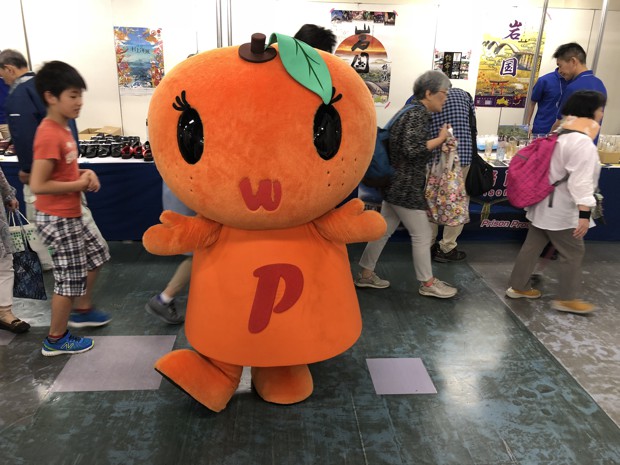 Wakayama Women's Prison is home to a six-foot-tall mandarin orange named Waka-P (an abbreviation of the prison's name). (Chris Carlier)

There are so many civic mascots that politicians have expressed concern they are a waste of government funds. In 2015, the governor of Osaka complained that he could not recognize most of his prefecture's 92 mascots, and ordered a cull which resulted in more than twenty characters getting the chop. Since then, Osaka has focused on promoting their main mascot, a shrike named Mozuyan. Last year, Mozuyan was expected to achieve some ambitious goals, namely being recognized by 75 percent of Osaka residents polled, and getting two million Twitter hits a month. Despite his best efforts, Mozuyan failed to meet those quotas, and now the axe hangs over his head.

When faced with a similar surplus mascot problem in 2014, Rumoi Subprefecture in Hokkaido decided that the area's 10 mascots would be melded together to make one giant robot named Ororon 8, much like the classic '80s cartoon, Voltron.

Perhaps the greatest threat to these government-sanctioned mascots is the rise of their unauthorized rivals. These colorful characters are independently created and performed by enterprising locals who make money on shows and merchandise. Unrestricted by government regulations, the footloose mascots can be more daring in their designs and behavior, and often make their inoffensive official counterparts seem dull by comparison. 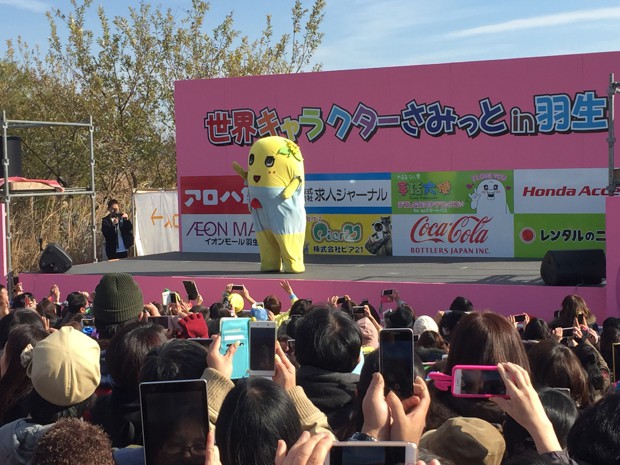 Funassyi's creator pushed ahead with the character on his own after Funabashi City rejected the genderless yellow pear fairy. Within months, it became a megastar while Funabashi's official mascot languishes in obscurity. (Chris Carlier)

When the officials of Funabashi, a city on the outskirts of Tokyo, declined to take on a genderless yellow pear fairy named Funassyi as their mascot in 2012, they could never have guessed that Japan's next mascot megastar had just slipped through their fingers. Funassyi's creator pushed ahead with the character on his own, and within months the anarchic pear, known for its acrobatic jumps and raucous singing, was winning over audiences on television. Funassyi released its first single in 2013 and its first album in 2014, followed by the opening of the first of several Funassyiland stores and the broadcast of an animated television series in 2015. By 2016, Funassyi's all-mascot heavy metal band, Charamel, was headlining the pear's own music festival. Twelve thousand fans poured into Tokyo's legendary arena, Budokan, to attend "Nassyifest." Meanwhile, Funabashi City's choice for official mascot, a bespectacled clerk named Funaemon, languishes in obscurity.

Another pear, Nashi-Bou, is the official mascot for the city of Shiroi. To the chagrin of city officials, a creative resident took it upon himself to design and build an entirely unsolicited arch-nemesis for Nashi-Bou, a pear-eating fungus monster named Byakushin Daimaou. Whenever the beloved pear mascot schedules a public appearance in Shiroi, there's a risk that the hairy purple beast will also show up and ambush him.

Every major town or city in Japan has introduced a mascot. Some were quickly forgotten, while others continue to grow in popularity. Regardless, gotōchi-chara is now a part of life. A generation of children have grown up seeing the faces of their local gotōchi-chara grin from the pencil cases and bento boxes they take to school each day. Like local sports teams or favorite regional dishes, these weird, lovable characters are now an indelible part of the identities of a generation who cannot imagine their hometowns without them.