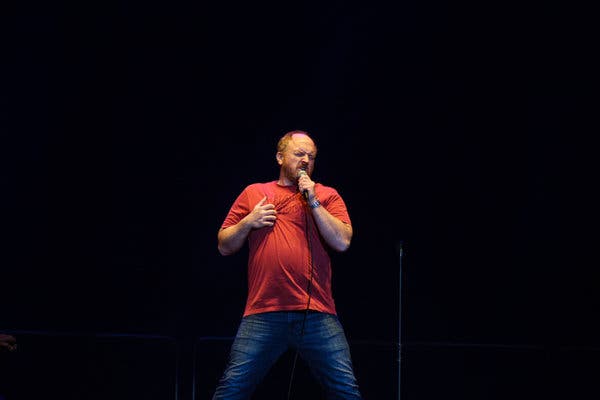 It was surely an uncommon sight late on a Monday night outside the Comedy Cellar, one of New York's most popular venues for stand up comedy: protesters.

There was Jennifer Boudinot, 37, holding a cardboard sign that read, "When you support Louis C.K., you tell women your laughter is more important than their sexual assaults and loss of their careers." Another woman, Lana McCrea, 27, showed up soon after with her own sign: "Does this sign make you uncomfortable, Louie?"

They were both here because of another sign. Outside the Comedy Cellar, listed to perform two sets on Monday, was Louis C.K., the onetime king of stand-up who admitted to sexual misconduct with multiple women almost exactly one year ago.

"Frankly, I was furious," Ms. Boudinot said in an interview. "Every female comedian he has harmed deserves a place on the Comedy Cellar stage one hundred times before he should be allowed back on the stage," she added.

Louis C.K. had been making surprise appearances at the venue sporadically since the end of August after having disappeared from the public eye, setting off a debate about whether his comeback attempt was tone deaf. Many club owners in New York, with an eye on ticket sales, said they would welcome him back. Noam Dworman, the owner of the Comedy Cellar, in Greenwich Village, has been supportive of Louis C.K.'s return, saying it was not his role to block a performer that many might find objectionable. Louis C.K.'s appearances at the Comedy Cellar have been increasing in frequency; he performed on Sunday night as well.

The appearances on Monday marked a new step in Louis C.K.'s comeback: It was the first time the Comedy Cellar advertised that he would be onstage, creating a buzz outside the club, as several pedestrians who saw the sign exclaimed loudly their desire to see him. Some immediately tried to get standby tickets, since the show was sold out. Ticketholders entering the venue were visibly uncomfortable as Ms. Boudinot and Ms. McCrea pleaded with them to walk out during his set.

Louis C.K. performed at the 9:30 show and again at the 11:30 show, which continued into early Tuesday morning. He was one of the last comedians to perform at the late show. The crowd greeted him warmly, and the vast majority stayed to watch, while a handful filtered out. As in his previous appearances, the references to his scandal were brief.

"So what kind of year have you guys had?" Louis C.K. said, starting off his set. "They tell you that when you get in trouble you find out who your real friends are. It's black people, it turns out. They'll stick by you."

He went on to say that he didn't read much about himself on the internet and that he was there to jest.

"I need to make jokes because I need an income," Louis C.K. said. He told the crowd that he lost $35 million "in an hour" as a result of the original report on his misconduct.

"Hard things, you survive them or you don't," Louis C.K. said. "I think even hell you can survive. Hell is not that bad. I've been there." 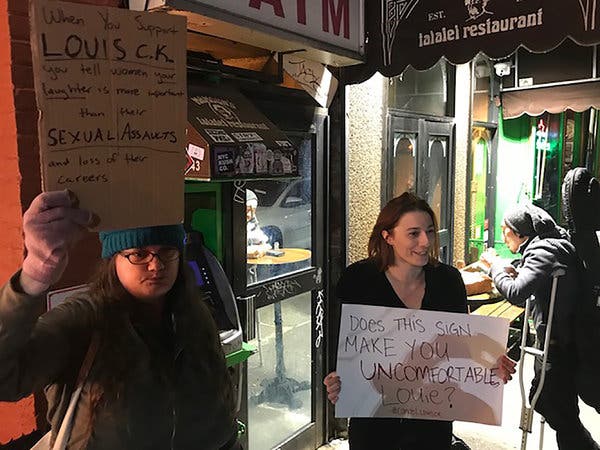 The rest of his set veered from raunchy to observational. There were no hecklers. He often consulted his notes, and mentioned that he had worked on the material "all year." He asked the audience if anyone ever wondered how many sexual partners their mothers had and he discussed how much he enjoyed ice cream.

Last November, five women — also fellow comedians — told The New York Times about instances of inappropriate behavior, including times he masturbated in front of them. Louis C.K. admitted in a statement at the time that "these stories are true." His career was sent into a spiral as television production deals were canceled, and the release of his film, "I Love You, Daddy," featuring story lines with behavior similar to his real-life misconduct, was halted.

Before the show, a spirited discussion broke out in the ticket standby line about the comeback. Srilaxmi Gujjula, a 25-year-old who had just begun her residency at the Brooklyn Hospital Center, said she hadn't heard of Louis C.K.'s misconduct until Monday. Her friend, Luxshni Kirupakaran, also 25, said the behavior bothered her, but not enough to keep her from seeing the show, since Louis C.K. was just one name on a lineup of several comedians.

Felix Hausler, a 27-year-old visiting New York from Austria, asked a group standing in front of him, which included Ms. Gujjula and Ms. Kirupakaran, "From Aziz Ansari to Harvey Weinstein, where is Louis C.K.?"

Stephanie Georgiou, a 25-year-old who had flown from London for a business trip, said Louis C.K. was a "three," once Mr. Hausler explained his scale, which put Mr. Weinstein at the worst on his spectrum.

The #MeToo movement permeated other sets at the show, creating awkward juxtapositions. Adrienne Iapalucci, who performed right before Louis C.K., joked about Morgan Freeman's sexual harassment accusations, saying that she'd still watch "Shawshank Redemption," because Mr. Freeman's character is already in prison. Another comic, Sam Morril, joked that he could no longer watch pornography in the same way because he was concerned about gender power dynamics in scenes involving the workplace.

After the show ended at 2 a.m., the audience spilled out onto the sidewalk, with many offering positive reviews of Louis C.K.'s performance.

Maria Bocanegra, 36, who was on vacation from Chicago, had bought tickets to the show before Louis C.K. was added to the bill, but she said she wasn't bothered by him performing.

"Some of the stuff seemed like it was a little raunchy," Ms. Bocanegra said. "But I'm like, 'Well, that's Louis C.K.' But at the same time, I was like, 'Is he doing this because he's trying to make a statement that 'I don't care?' "

But she did say that she was mindful of Ms. Boudinot — who said she was a survivor of sexual assault — and Ms. McCrea, the protesters who had implored people to walk out.

"I respect those women for doing that," Ms. Bocanegra said. "We respect that, totally. But was I ready to, like, leave a show for that? I don't think so."