We need to make urbanism more inclusive and democratic if we want to realize a better future, and that means devolving power from the dysfunctional nation-state to cities and neighborhoods.

Around the world, nation-states are looking backward—electing populist leaders who want to set back the clock on economic, social, and cultural advancement. Our cities remain our truest beacons of progress and compassion, developing new approaches to equity, devising new initiatives on jobs, healthcare, and education, and, of course, hosting the clusters of talent and technology that power innovation and economic growth and raise living standards.

But this reality has created a lopsided prosperity, which I call "winner-take-all urbanism." A small group of cities across the world, a small number of neighborhoods within them, and a small sliver of their advantaged classes haul in the lion's share of benefits from our new urban age, while many more cities, many more neighborhoods, and many more people fall further behind.

Winner-take-all-urbanism has in fact set in motion the populist backlash that sees cities as the enemy and would cut off their sources of growth and progress. The very same clustering of talent and economic assets that has made cities so successful is also fracturing our society. This new urban crisis is not just a crisis of cities; it also represents the fundamental contradiction of modern knowledge-driven, place-based capitalism. 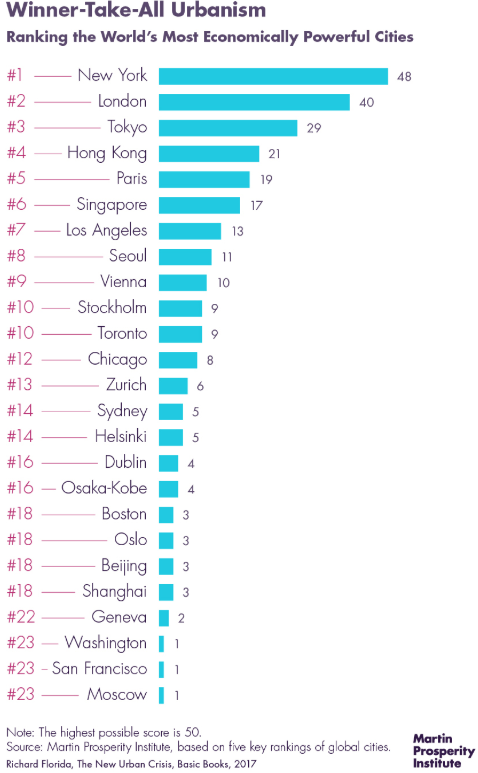 The key here is not to renege on urbanism, but to make urbanism work for every member of society. To do so will require moving from winner-take-all urbanism to a new, more inclusive model of urbanism for all, in which all communities and all classes can participate.

The knowledge economy is urban

Many have outlined the transition from the rigid industrial economy to the flexible, post-industrial knowledge economy. The knowledge revolution is an urban revolution. The basic engine of the new economy is no longer the corporation, but the city.

Place—or the clustering of knowledge, ideas, talent, and economic assets in place—has become the basic platform for growth and prosperity. A hundred years ago, the majority of workers worked on farms. Fifty years ago, more than half of workers were employed in industry. Now the great bulk of workers are employed in service, knowledge, and creative industries, which are clustered in cities.

These economic shifts are reflected by society's growing urbanization. In 1900, roughly 15 percent of people on Earth lived in cities, and by 1950, about 30 percent did. Today, that figure stands at more than 50 percent, and is projected to level off at 85 percent over the next century. That will account for approximately 8.5 billion people. This incredible tide of urbanization is accompanied by the rise of mega-cities and mega-regions. In 1900, there were 12 cities with a population of more than 1 million; in 1950, 83; in 2005, 400; and in 2017, 500.

Mega-cities are concentrating ever-greater proportions of the world's wealth and productivity. The world's 300 largest metropolitan areas produce nearly half of global economic output, despite hosting just 20 percent of the world's population, according to the Brookings Institution. The largest, most productive metros are as economically powerful as major countries, as the map below shows. Tokyo's economic output is comparable to that of South Korea, the world's 15th-largest economy; New York's is comparable to Canada; Los Angeles to Australia; and London to the Netherlands. 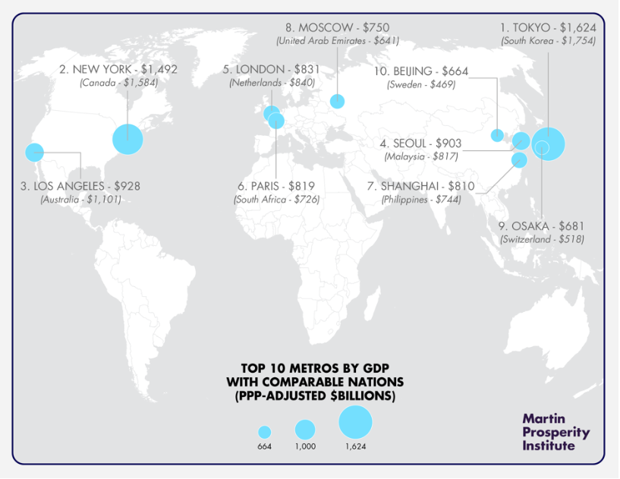 Innovation and startups, which power economic growth, are even more concentrated, with more than 40 percent of venture-capital-backed startups in the world concentrated in the San Francisco Bay Area and across the New York-Boston-Washington, D.C. corridor.

But the world does not revolve around these powerful individual cities and metros. Instead, its real economic axis turns on 40 mega-regions—even broader clusters of economic activity. Along with my colleagues Tim Gulden and Charlotta Mellander, I identified these mega-regions by using satellite images of the world at night to observe actual clusters of activity, expressed by the light signatures of the regions. The 40 mega-regions, with more than 5 million people, produce in excess of $100 billion in economic output. They are places like the New York-Boston-Washington corridor; greater London; greater Tokyo; the region spanning Rome, Milan, and Turin; the region spanning Amsterdam, Brussels, and Antwerp; and the area from Barcelona to Lyon. Taken together, these mega-regions produce two-thirds of economic output worldwide and a full 90 percent of global innovation, while housing only 18 percent of the world's people.

Simply put, the world is no longer organized around nation-states. Cities and mega-regions are the basic building blocks of the global economy. But the rise of global cities is not a panacea. Left unchecked, today's clustered urban economy generates a small group of winners and a much larger group of losers, across cities as well as within them.

While the clustering of talent and economic activity transforms cities into hubs of innovation that propel economic growth, it also etches deep divides into society. And in doing so, it propels the populist backlash that threatens our cities and our very sources of economic and social progress. Class conflict is no longer on the factory floor, as Karl Marx wrote, but over place and geography. Just as cities are the nexus of innovation, growth, and prosperity, they have also become the nexus of class conflict.

This plays out clearly across geographic lines. For example, America has seen a widening gap between geographic winners and losers: While big cities prosper, smaller cities, and especially rural areas, are left in the dust. Between 2014 and 2016, the 53 largest American metros areas accounted for 72 percent of economic growth and 74 percent of job growth. By contrast, small cities saw their share of economic output shrink by 6.5 percent between 2010 and 2016, while rural places experienced population decline, as well as a decline in previous employment growth. Donald Trump found his support, as populists across the world are doing, in these smaller, less connected places that are falling behind.

But even the winners of winner-take-all urbanism are beset by problems. Their economies are increasingly bifurcated, consisting of high-income, high-skill knowledge jobs on the one hand, and low-skill, low-pay service-class jobs on the other. As the affluent sort themselves into the most central, desirable cities and neighborhoods, the less advantaged are relegated to neighborhoods with fewer amenities and opportunities. The vast majority of people are functionally shut off from the tremendous economic opportunities on offer in the world's global cities.

Meanwhile, farther-out and less-connected regions, as well as peripheral suburbs and rural areas, have seen their economies erode due to the decline of manufacturing in the developed world. This spatial polarization, in turn, contributes to the resentment, anger, and outright hatred on display in the national politics of so many countries.

The graph below shows percentage growth in employment for U.S. metros of different sizes between 2010 and 2018. Employment in large metros of more than 100,000 people grew the most, by more than 14 percent. Meanwhile, employment in non-metro areas grew less than 4 percent during this timeframe. 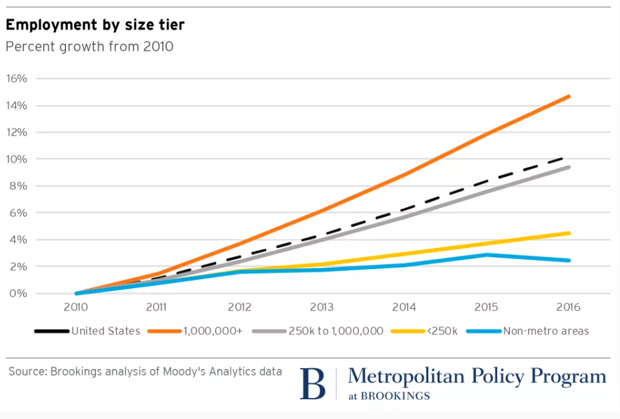 The world's great global cities have become centers of innovation and economic power. Still, in most cases, they remain beholden to backward-looking nation-states and provinces, which often undermine urban interests and cause additional economic damage in so doing. Indeed, cities in anti-urban nations, provinces, and states are effectively trapped by political regimes that try to undermine their economic and cultural assets, siphoning off their tax revenues, under-investing in their infrastructure, undercutting their investments in universities and innovation, and pre-empting their abilities to attract immigrants and remain culturally open and tolerant.

In her final book, the late urbanist Jane Jacobs correctly surmised that we will face a deepening "dark age ahead" and that the last great hope for democratic life lay in our cities and communities. This will require a shift in political and fiscal power commensurate to the shift in economic power from the nation-state to our cities and urban areas.

The key challenge of our time is to create a new governance system for the 21st century's knowledge-driven, place-based economy.

The key challenge of our time is to create a new governance system for the 21st century's knowledge-driven, place-based economy, by massively devolving power from the dysfunctional nation-state to cities, localities, and neighborhoods. Study after study after shows that such localized government is more economically efficient and democratic than the centralized alternative. And survey after survey demonstrates that citizens have more confidence in local government than national government.

Local governments tend to be less ideological and more focused on problem-solving, and they know intimately which problems actually need to be solved. They are more accountable to the people they represent, because they interact with them every day. And because people pick where they live by "voting with their feet," constituents tend to share the same values as their leaders.

Restoring growth, spurring innovation, and igniting the economic engine that is our cities won't happen on its own. Left unchecked, our current urban moment will create an even less equal and more clustered winner-take-all urbanism. A better future will require us to heal our political, economic, and spatial divides by shifting to an urbanism for all, from which all can benefit.

Richard Florida is a co-founder and editor at large of CityLab and a senior editor at The Atlantic. He is a University Professor and Director of Cities at the University of Toronto's Martin Prosperity Institute, and a Distinguished Fellow at New York University's Schack Institute of Real Estate.