Early one February morning, at a large woodworking space in Bed-Stuy, Brooklyn, a DJ from Amsterdam ushered a packed floor through the waning moments of what had been eight hours of continuous dancing. The music was a blend of Detroit techno, acid house, and a dash of new wave. Dancing for the duration of an average workday can be a strategic undertaking, and some guests talked of taking "disco naps" early in the night to fend off exhaustion. Others took drugs, or danced sober, perhaps exorcising pent-up emotions. But of the many inebriants fueling the overnight marathon, one was ubiquitous: a yerba maté soda called White Label Maté. 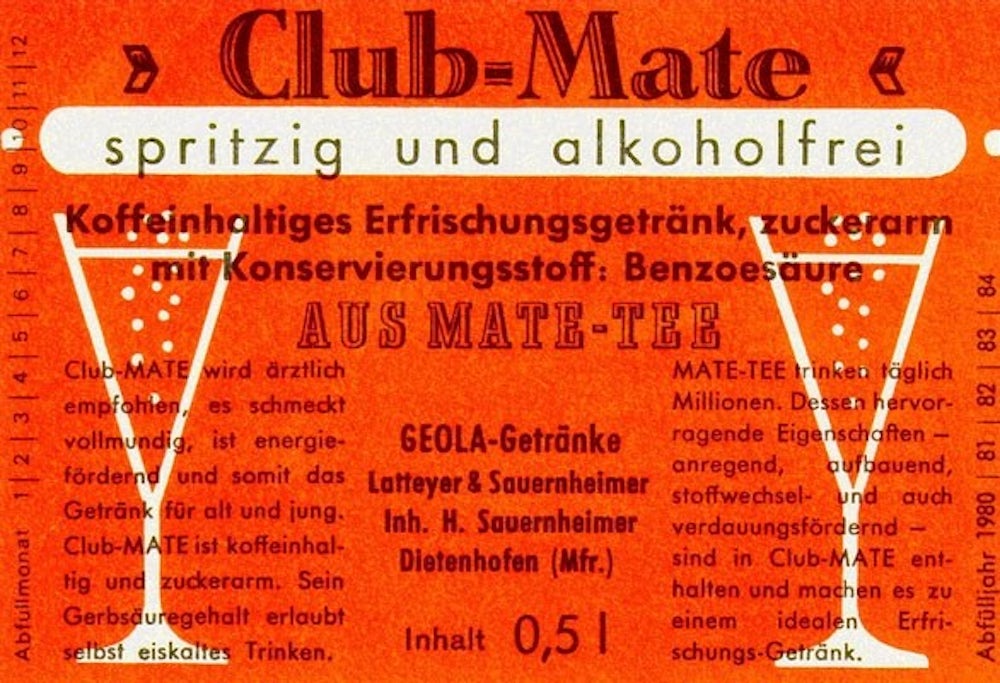 An early German advertisement for Club-Mate describes it as having health benefits. Club-Mate

The drink is a carbonated maté tea, made out of the naturally caffeinated leaves of the South American holly tree. In some regions of the continent — such as the rainforests of Paraguay, where the Aché Guayakí tribe lives — those leaves are turned into a tea drunk communally out of a traditional gourd at celebrations. Elsewhere, it's consumed casually, like coffee or other types of tea. Yerba maté is a stimulant, known for offering an even-keeled dose of energy and a measured, calming level of focus — all the good things about coffee without any of the jitteriness.

Over time, the drink began to make its way around the world. In 1924, a German beverage magnate, Georg Lattier, acquired a license to produce and sell a carbonated version of the tea; he called it Sekt-Bronte. The fizzy, non-alcoholic beverage grew in popularity and was advertised as being "beneficial to health, stimulating, with a rich taste comparable to wine." The brand remained a regional staple until 1994, when the license for the production of Sekt-Bronte was sold to the Loscher brewery. Loscher changed the name of the drink to Club-Mate and began distributing it throught Germany.

More recently, carbonated yerba maté, labeled as maté soda, has become prevalent in club environments, thanks to its subtle boost of energy and relatively low sugar content. Loscher's brand, Club-Mate, is a popular drink for ravers traversing iconic clubs like Berghain and Tresor in Berlin. (Berghain has started serving a Club-Mate alternative called MATE MATE.) White Label, which is bottled in Brooklyn, was inspired by Club-Mate's popularity in the dance music world. The brand is the creation of entrepreneurs John Barclay, Jesse Rudoy, and Julian Duron. The three are based in Brooklyn and have ties to New York's underground dance music community; Barclay owns the popular bar Bossa Nova Civic Club in Bushwick, and Rudoy and Duron both make music. 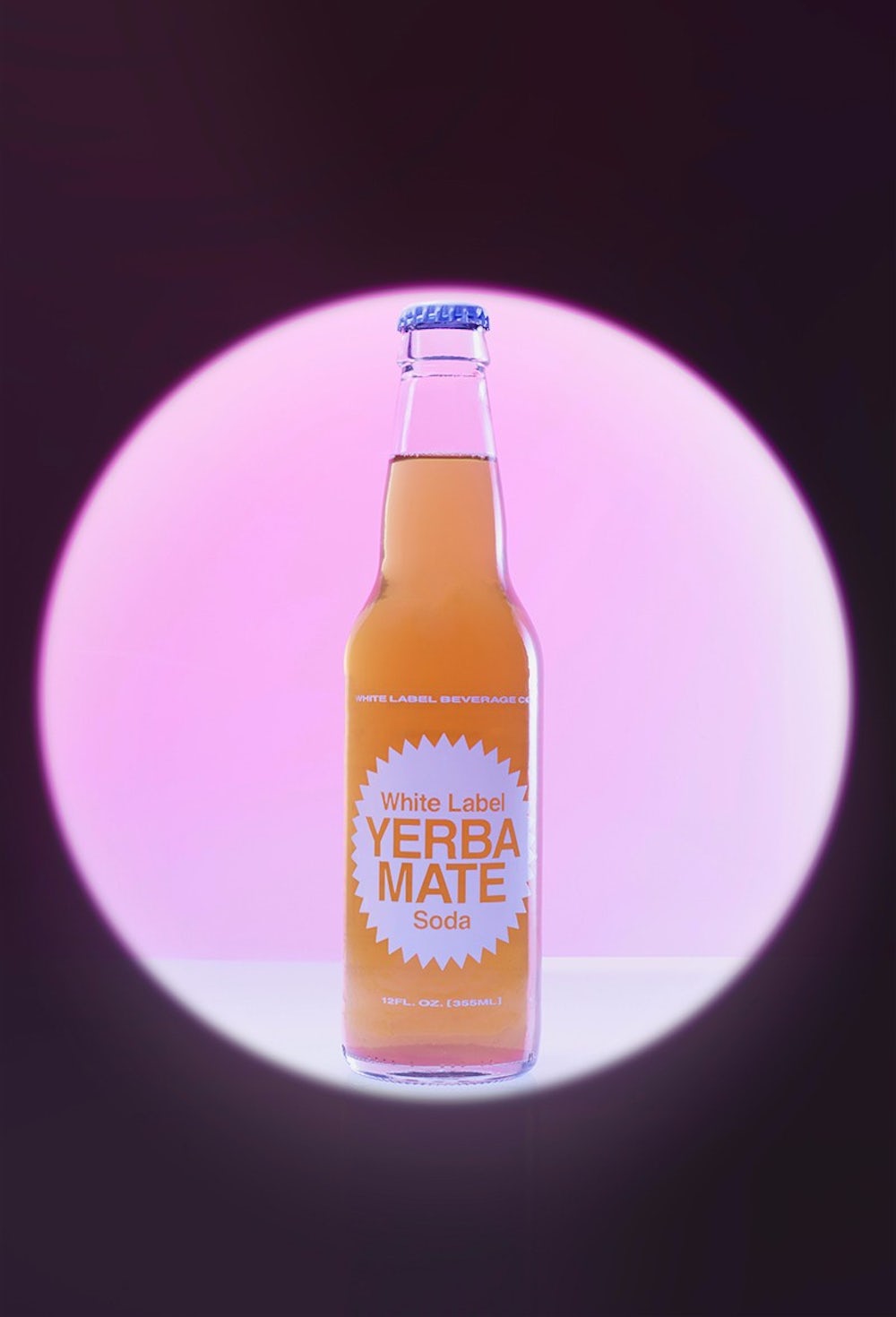 In comparison to Club-Mate, which has an aggressive flavor profile led by the earthiness of maté tea, White Label Maté has a subtle taste. It's sort of like ginger ale, if the ginger was replaced with maté tea. Both drinks are something of an acquired taste, but provide the same revitalizing effect as coffee or Red Bull, minus a glucose crash at the end — perfect for eight hours straight of defying your body's wishes to a house music soundtrack.

Energy drinks have become synonymous with nightlife and youth culture. Red Bull doesn't release much about its financials, but it has said it regularly spends approximately one-third of its total annual revenue on marketing globally. It spends millions of dollars to sponsor athletes from a wide variety of "extreme" sports like motocross and snowboarding, and to throw events that resemble the parties Club-Mate is popular in. Every summer, for example, the brand hosts an enormous, brilliantly curated music festival in New York. It also has an active creative wing, complete with a record label, a music magazine, and concert series around the world. The same can be said for Red Bull's contemporaries. Brands like Monster Energy and Rockstar employ extensive marketing efforts targeted at young people looking to fuel late nights of partying or "extreme" lifestyles. Monster Energy's logo can be seen on everything from decals on monster trucks to the bottoms of professional skateboarders' decks.

Though maté soda isn't exactly an energy drink, it's frequently used as one. And its exposure happened quite differently from the likes of Red Bull and Monster; its lifestyle associations are the result of word-of-mouth, organic chatter, not large marketing budgets. "When the drink first made its way onto US soil in 2009, it was brought in specifically for hackers, by hackers. The lone importer for the United States is 2600 Enterprises, an offshoot of the decades-old hacker 'zine 2600: The Hacker Quarterly," Eater explained in a 2015 article. "The drink has gained a loyal — and ever increasing — following among EDM and techno musicians, artists and anyone who has spent a sweaty, pulsating night dancing until the wee small hours at a club in Berlin." Niche communities like hackers and clubbers have resorted to the drink for years because of its utility: If you need to stay up all night without feeling worse than you already would have from staying up all night, maté is an ideal solution. The devotion to fizzy maté tea ran so deep in hacker circles that one collective in Pittsburgh published an "open source" maté soda recipe.

In 2013, several years before he would launch White Label Maté, Barclay's club Bossa Nova was the first bar in the United States to serve Club-Mate. Back then, he explained in an email, he would drive to an Applebee's parking lot in Long Island to buy pallets of Club-Mate from the hacker collective that was the only US importer of Club-Mate at the time. Patrons of Bossa Nova were delighted by the soda-cum-energy drink, and soon its popularity spread to a number of bars and bodegas around the city.

The adoption of maté soda as an alternative to coffee or energy drinks can be understood as being part of a broader shift in our culture's relationship to food and drink.

Regardless, access to maté soda brands in the US remains limited. On Club-Mate's website, you can peruse an interactive map of all of the drink's stockists; save for a few blips here and there, it's hard to find. Since the drink is imported from Germany, it is rather expensive, too. In Berlin, for example, a bottle of Club-Mate goes for €1.50 (roughly $1.60); in New York, I recently bought a six-pack for $36, or $6 per bottle. White Label Maté was created last year, after Barclay approached Rudoy and Duron about making an American maté soda that could be cheaper and more widely available than Club-Mate. As it happened, one of Barclay's friends worked in a lab as a flavor chemist and, together, they started experimenting with different flavors to eventually develop White Label Maté. (Bossa Nova still serves Club-Mate, but now offers White Label for less.)

On a recent evening, I met the White Label team at Bossa Nova, where they were preparing to deliver a few cases to a warehouse in Brooklyn for an upcoming party. (The event would end up going until 2 p.m.). Rudoy told me that when talking to clients, they usually refer to White Label as a kind of "alternative energy drink" or an "herbal energy drink." They've noticed an increasing interest from bar owners for a healthier fuel.

"For a few years now, people have been moving away from traditional sodas and looking for soft drinks with lower sugar content and natural ingredients," Rudoy said. "I think you're going to start seeing the energy drink industry follow that trend too, as people seek out better energy sources."

Yerba maté's roots aren't entirely lost on manufacturers and consumers of its bubbly, modern counterparts. The beverage company Guayaki, whose maté soda is available in some New York City delis and grocery stores, is named after the tribe that originated yerba maté. And much of its brand identity is about a commitment to the environment; one initiative is a foundation dedicated to saving the rainforests.

"For a few years now, people have been moving away from traditional sodas and looking for soft drinks with lower sugar content and natural ingredients." — Jesse Rudoy

For its part, White Label emphasizes its sourcing of natural ingredients. "Our main criteria were that the ingredients were ethically sourced and produced and predominantly organic," said Barclay explains. The adoption of maté soda as an alternative to coffee or energy drinks can be understood as being part of a broader shift in our culture's relationship to food and drink. No longer is "organic" a pejorative term for pretentious elites; the ideology of healthy living and healthy consumption has spread to everything from fast food to big box food products. Last year, Kraft Foods quietly removed food dyes and preservatives from its classic Macaroni & Cheese. The organic food sector saw record growth in 2015, the last year for which data is available. The popularity of maté iced tea — which is now widely available in numerous flavors at regular tea and coffee shops — as well as coffee alternatives like matcha and dandelion "coffee" point to a burgeoning social consciousness affecting the beverage industry.

Of course, that doesn't necessarily mean it is easy to break into the business. Barclay described the early hurdles of trying to get the company off the ground, namely finding anyone to produce the drink on a large scale. "Soda is an older industry and bottling facilities aren't really actively advertising their services or even Google-able," he said. "It took several months of digging around and calling before we found a place to take us on."

Still, the response so far has been encouraging, said Rudoy. When they launched the company, he explained, their main focus was to get the drink into as many dance music-oriented clubs, bars, and underground parties as possible. The approach appears to be paying off. "I think we've managed to become a sort of staple of Brooklyn's dance music scene in a relatively short amount of time," Rudoy said. "We're now getting more and more inquiries from more traditional restaurants and cafes, even offices, about stocking the soda, but we imagine this all stems from people encountering it in some sort of rave context."

For "alternative energy drinks" like White Label, spending millions on marketing and endorsements is out of the question, but being associated with cool people and cool parties may wind up being just as good. Introducing a strange drink to a relatively new market is a big feat — now they just have to finish the work hackers and ravers started.