This week, clinical researchers at the Mayo Clinic announced some promising early results from a clinical trial that turned a killer into a therapy: their work harnessed a modified measles virus to attack a specific type of cancer. A larger clinical trial is still ongoing, but the people running this trial decided to describe two of the patients who received the virus, one of whom ended up in remission.

It's important to note that a short-term remission in one of the two patients who are described here doesn't come anywhere close to being a general cure for this type of cancer. Equally important is the fact that attempts to turn viruses into cancer killers go back decades, and a lot of the early trials also looked very promising. But to date, none of the viruses have been turned into treatments.

The idea behind using a virus to target cancer is the same one behind most other cancer treatments: cancer cells, although they look a lot like normal ones, have some key differences. Cancer cells express different proteins on their surface and control their growth differently. So it's possible to use these differences to design the right virus to specifically target cancer cells or only proliferate when infecting them. This may then lead to the death of the cancer cell, either by the virus itself killing it or because the virus attracts an aggressive immune response.

This idea has been tried a number of times over the past few decades, with many of the viruses causing some significant damage to tumors in preliminary clinical trials. Many further trials are ongoing but, so far at least, none of these viruses have cleared the necessary clinical trials and received FDA approval. 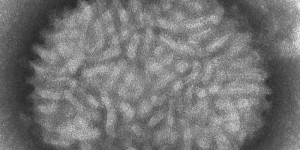 The new work is the result of a fortuitous match between a well characterized virus and a specific type of tumor. One of the measles linages that was used for vaccine development (named the Edmonston lineage) adapted to growing on cells in the lab. As a result, it changed the protein it latches on to in order to enter cells. By chance, that same protein is expressed at high levels on the surface of myeloma cells, a cancer that affects white blood cells normally found in the bone marrow.

To track the spread of the virus in patients, the researchers engineered it to carry the protein your thyroid gland uses to import iodine, an important component of thyroid hormone. With this gene in the virus, any infected cells would also import iodine, allowing them to be marked for imaging with a radioactive isotope of iodine. (This leaves open the possibility of using a different isotope that emits more damaging radioactivity as part of the treatment in the future.)

The researchers have started a small clinical trial to determine the appropriate dose of this virus. While that trial is still in progress, they decided to report on two of the patients who received the highest dose. All of the participants were screened for the presence of antibodies against measles, which could interfere with the treatment. Despite immunization, this wasn't as much of a problem as it might seem, given that both myeloma and the treatments for it interfere with immune function. One patient's list of previous treatments was pretty impressive:

Both of the patients experienced a fever after administration of the virus, but these passed within a few days, after which there was little sign of the virus in the blood of either participant. One of the two patients didn't respond to the virus; six weeks after treatment, her tumors continued to grow. But the second felt that at least one of her growths began to shrink only 36 hours after the virus was injected. By six weeks, it could no longer be detected by feel, and imaging revealed that it was significantly reduced. At the time the authors wrote the paper, this patient was considered to be in remission.

What can we tell from two patients? Again, pretty much nothing. Larger trials and multiple treatments with the virus (instead of a single dose, as detailed here) are going to be needed to draw any conclusions about this treatment. In fact, we can't even be certain that this use of the measles virus is safe without the results of the full trial being reported.

The decades-long list of promising results that have not yet ended in a therapy would argue for additional caution when thinking about these results. Nevertheless, it's clear that researchers are getting increasingly clever in tailoring their viruses for tumors and making sure any infected cells truly end up dead (the iodine pump used here is a neat approach). Hopefully, one of these trials will end up sending something on to the clinic.