It took three days for Vermaas and his crew to get their fire contained. They used chainsaws (to cut down trees that the fire would have otherwise used as fuel) and that Pulaski (to dig into the soil so there would be nothing on the ground for the fire to feed on). Hoses can factor into a jumper crew's firefighting plan if a blaze is conveniently close to a river. Usually, it's not—so instead of soaking their fires, smokejumpers starve them to death.

It's nonstop work over rough terrain, and all the while the smokejumpers have to ensure they don't let fatigue cloud their situational awareness. Though jumpers tout their safety record, there are still plenty of ways to get hurt in the woods—particularly when those woods are on fire: grizzlies, falling trees, flames that change direction and burn back toward you. When the fire settled down on the evening of the third day, Vermaas and the two other jumpers retired to their campsite. On fires with a bigger crew, rookies will sometimes engage in cooking competitions to see who can make the most back-country gourmet meal featuring the smokejumpers' No. 1 staple of nutrition—Spam—as the star ingredient. (You'd be surprised: Spam tempura; Spam with a Ritz Cracker crust; Spam with wild huckleberry glaze...) With only three jumpers, though, this particular campsite was a bit more subdued. On their second night in the woods, the jumpers watched as a storm cell passed over them, strobing with lightning. One bolt sounded as though it had struck right above their heads. "Hope that didn't start a fire," one of them joked.

The next day, just after sunrise, the jumpers surveyed the perimeter they'd cut around the one-acre blaze and made sure any spot fires were extinguished. Then they began the unglamorous—but crucial—chore of mopping up: crawling on their knees over the blackened, burnt ground, feeling with their bare hands for any remaining spots of heat. "Fire is just dirty, sweaty, shitty work," Vermaas says. "The fun part is when you're actually on the front and you're chasing, you're racing the fire. That's what we all crave. That's why we're all here."

At nine that morning, a pilot flying overhead radioed the crew: You guys know you've got a fire-start right next to you? One of the other jumpers volunteered to bushwhack up the ridge to check out what was going on. It was slow going; the jumpers had been working in the thick, 20-foot-high brush that made walking a quarter-mile feel more like walking four. When the scout made it to the top of the ridge, he immediately radioed back: Let's get out of here.

The fire had crowned—that is, started burning in the tops of the trees. The wind was pushing it toward the jumpers, and it was moving fast. In other circumstances, maybe the jumpers would have radioed for a plane to dump a tanker of retardant on the flames to slow things down, but by around 11 a.m., all those little fires had merged into a big one, and the smoke was so thick the helicopters couldn't see a damn thing. Vermaas and the other jumper waited anxiously for the scout to fight through the brush back to them. The other jumper with Vermaas, a guy with decades of experience, barked into the radio: We do not have a safety zone, and our escape route is threatened. "That means," Vermaas explains, "you basically are running out of options."

"I wouldn't compare us to the Navy SEALs—those guys get shot at—but it's similar."

Vermaas heard the loud, gunning sound of what he thought was a helicopter; he watched the treetops sway and felt a momentary surge of relief—until he realized that it wasn't a chopper making that sound, or all that whooshing wind. The danger was the fire itself, ripping its way through the treetops toward them. No plane or rescue vehicle could make it anywhere near them; they'd have to get themselves out of this mess, and fast.

By the time the third crew member showed up, Vermaas says, "it was already fucking go time." The jumpers ditched their gear—"We made the decision, 'Fuck the gear, fuck everything, leave it, we're going'"—and made their way through the brush, racing the fire down toward the river. Vermaas tried not to think about what would happen if the fire spotted and caught below them—fire burns fastest uphill, and when it gets going even the most fleet-footed smokejumper doesn't stand a chance. All three jumpers made it down to a creek and safe haven, but it was close.

Vermaas stood in the creekbed, then watched as the trees swayed with the energy only a fire could create—when wildfires burn hot enough, they can generate their own weather. Half an hour or so more and those flames would've burned right over them. Days later, a salvage crew went in to look for the jumpers' gear. The only remnants they found were metal grills from their jump helmets and six fasteners from their parachutes. Everything else had been reduced to ashes.

"No person should have ever been down there," Vermaas says. "It was stupid." Not necessarily because conditions were dangerous but because the traditional tasks of smokejumpers have become increasingly incompatible with forest science in recent decades. When the program first started, smokejumpers were charged with putting out every fire they parachuted into by 10 a.m. the following morning. U.S. Forest Service smokejumpers were an offshoot of World War II-era paratroopers, and so it should be no surprise that early jumpers took a militaristic approach to firefighting. Wildfire was the enemy, and they attacked every stray spark with ferocity. The small fires that mid-century smokejumpers rushed to put out served several important functions, including thinning forests out; when that natural cleansing process doesn't occur, you end up with overgrown woods and wildfires that burn hotter and bigger. And you end up with three jumpers caught in the middle of it.

"We've only done more harm to the forest by suppressing these fires that are supposed to happen because they're a natural part of the ecosystem," says Vermaas, who has a degree in forest management and fire science from Oregon State. "Fires are volatile because of us." He acknowledges that his philosophy of the beneficial ecological role of wildfires does not exactly align with his chosen profession. "I'm a total hypocrite. But they don't pay you to watch them burn."

"Smokejumping was never meant to be a real job."

As our understanding of fire has evolved, so has the role of smokejumpers. Though they still parachute into some of the nation's most remote areas, often a lightning-sparked fire in a national park will be allowed to burn itself out naturally. These days, smokejumpers are deployed more strategically, on fires that need to be put out quickly because there are nearby homes, or other resources that need protecting. "I've jumped on fires in suburbs, fires right next to highways," says Cottrell, one of the Missoula smokejumpers.

Hardy Bloemeke, an air attack pilot in West Yellowstone, started jumping when he was 21 and kept going until he reached the mandatory smokejumper retirement age of 56 a few years ago. Back in the day, he said, if there weren't enough jumpers on base when a fire call came in, dispatchers had a trick: call the bars in town. On Bloemeke's first fire jump in Yellowstone National Park, National Park Service employees met his crew after its job was done and foisted cases of beer on them. "I can only tell you that because all those guys are dead or retired by now," Bloemeke says. "Today, that would get you fired." 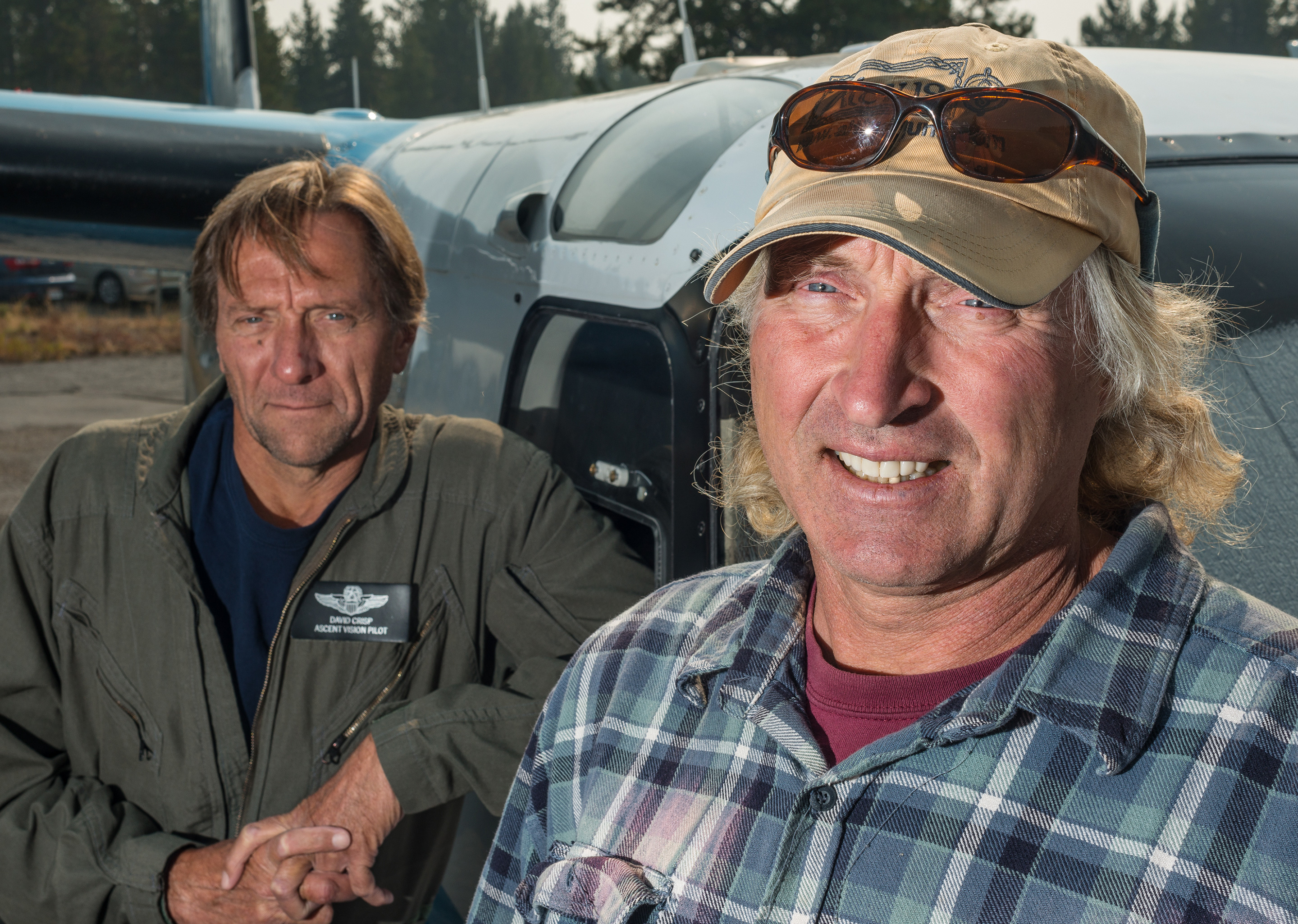 Pilot David Crisp (left) and retired smokejumper Hardy Bloemeke, with more than 350 jumps behind him, now staff a plane to help coordinate air attack efforts in the West Yellowstone area.

Smokejumping used to be a job college kids with an appetite for adventure would try for a couple of summers before moving on to do something else. These days, most jumpers are career firefighters, though the seasonal nature of the work means they aren't entitled to benefits and only get subsidized healthcare for the months they're working fires. The job also used to not be particularly conducive to family life, but the Missoula base now has day care. "It seems like they're a lot more professional than we were back then," Bloemeke says. Not far away, jumper Knute Olson's bleach-blond twins are toddling around the tarmac. "We had a lot of fun. Probably too much fun. Most of us were single—once somebody started a family, they usually moved on. When people wanted to settle down, they'd go find what we called 'a real job.' Smokejumping was never meant to be a real job."

he rookie-induced delay turned out not to be a problem for the West Yellowstone Smokejumpers: "Our jump ops all went really smooth, just like procedure," says Hill, the jumper-in-charge, when he calls me that night from the campsite. The eight-man crew spent the day cutting fireline into the smoldering timber to stop the half-acre fire from growing. The forecast was for overnight temperatures near freezing, which would likely subdue the smoke and turn the jumpers' main tasks into staying warm and watching out for bears.

The next few days, the jumpers will wake up and deal with any still-burning logs before crawling through the black on their hands and knees. Once they're confident the fire is well and truly extinguished, they will load their chainsaws and their Kevlar jumpsuits and candy bar wrappers and those extra pairs of socks they brought with them into their packs and begin the long trek to wherever the nearest road may be. They will have endured five days of being alternately hot, cold and tired; their bellies will be full of Spam, their bodies pushed to the limit. Back at the base, they'll distract themselves with Razor-scooter races around the tarmac and coin-flip games, snagging whatever entertainment they can as they await the next call from dispatch. In a few weeks, the season will wind down and they'll head to their offseason jobs on ski patrol or as pilots or teachers or emergency room doctors. But for now, they're just happy to be exhausted in the woods with a fire smoldering in the distance.

"This," Hill says, "is the thing we work all summer for: jumping on fires."