A native of Edmonton, Csotonyi's interest in drawing dinosaurs was, for a time, little more than a hobby that carried over from childhood. He just really liked dinosaurs, and as an artist it was a natural extension. Eventually he took a step towards turning that hobby into a career when he started submitting his work to various outlets in 1998. While still studying for his PhD, he received his first commissions to restore dinosaurs for publications and institutions like National Geographic and the Houston Museum of Natural Science. "It was in 2005, when I got my first paleoart commissions, that I realized that I could potentially make this a career," he explains.

His work primarily involves recreating scenes from the past, conjuring up creatures and landscapes from prehistoric times. It's a process that involves as much science as it does imagination. When illustrating dinosaurs was still a hobby for him, Csotonyi experimented with all kinds of tools, including pastels and acrylic paints. But once he started taking the art form more seriously, he realized that digital techniques were more useful when it came to accuracy. Today, his process relies heavily on photography: not only does he use images of fossils as a reference — key for getting the anatomy and structure correct — but he also takes photos of locations around the world to help aid him in crafting the elaborate scenes he paints. 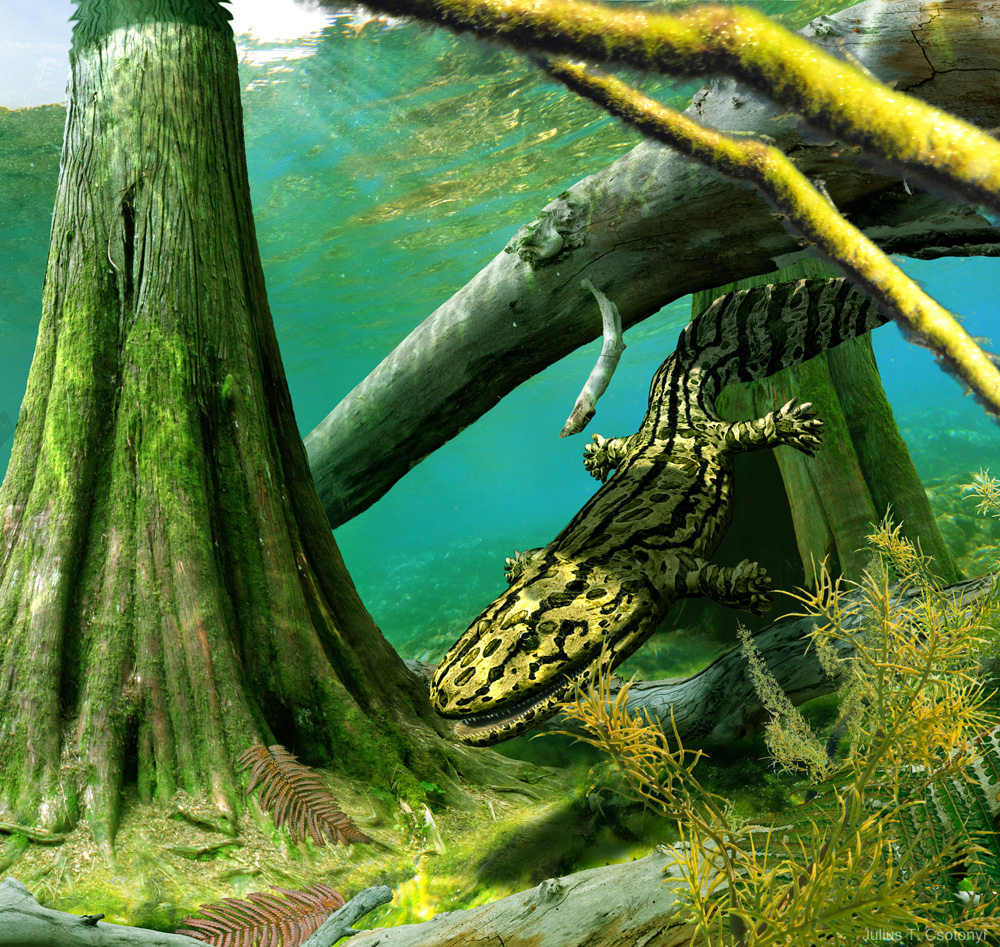 "I'll always have a passion for scientific discovery."

The forests of the Jurassic era may not exist today, but there are locations around the world that offer similar conditions where Csotonyi has traveled to gather reference photos. Places like the forests and mountains of British Colombia and the dry, arid deserts of the southwest United States offer prime material for recreating prehistoric backdrops. He's even taken underwater images in Hawaii in Mexico, building a library of some 250,000 photos. "These are as similar to the target systems as possible," he says of choosing which locations to visit. "Species may differ, but many of the same plant groups or physical and geological features are present." Outside of photography, research also includes reading plenty of scientific journals, and when possible talking to researchers, scientists, and museum curators. The amount of research varies, depending on whether the work involves illustrating just a single animal, or an entire, complicated scene.

These illustrations aren't static — given the fast pace of scientific discovery, Csotonyi often has to update pieces to coincide with new revelations. The relatively new concept of feathered dinosaurs, in particular, has changed the way he renders these prehistoric giants. "I've had to return to several of my previous illustrations to update them as new information has become available based on increasingly informative fossil finds, and also because as young as my career is, I have learned to correct mistakes that I made earlier on," he explains.

Csotonyi's work has drawn particular praise for his photorealistic style — none of us have ever seen a dinosaur in the flesh, but Csotonyi's digital paintings can make it feel like we have. "When executed skillfully, photographic compositing can facilitate suspension of disbelief like no other medium," he says. Of course, some artistic flare is important, as well. Csotonyi's paintings often involve dramatic battles between prehistoric beasts, and striking silhouettes that use a delicate balance of lighting and color. That sense of drama is a necessary part of his work — it's meant to get people excited. "Paleoart is a very powerful way to help to convey visually to the public the excitement of paleontological discovery," Csotonyi says, "and therefore to promote scientific education."

A collection of this work has been compiled in the book The Paleoart of Julius Csotonyi: Dinosaurs, Saber-Tooths, & Beyond, which is available today. There are even a few childhood dinosaur drawings showcasing his early love for the art form. His work has been featured everywhere from museums to magazines, but, as a scientist himself, there's one particular type of commission that gets him excited — illustrating newly discovered creatures. "Even though I've moved from scientific research to an art career," he says, "I'll always have a passion for scientific discovery."