From a lab at Oregon State, Sarah Masoni works with companies big and small to create flavors, develop products and market them.

Sarah Masoni at the Food Innovation Center at Oregon State University in Portland. "She's an evil genius," one client said. "In a good way."CreditJohn Taggart for The New York Times

PORTLAND, Ore. — Most makers of fancy food like to supply a romantic story behind the birth of their triple-berry jam or new ice cream flavor. Maybe it was Grandma's recipe, or a life-changing trip to Vietnam.

Here in Oregon, there is a fair chance that the inspiration was Sarah Masoni, a university laboratory manager with a title that is less than lyrical: director of the product development and process program at the Food Innovation Center of Oregon State University.

Ms. Masoni is not a trained chef, a food scientist or even a typical food fanatic, though she can master most recipes and identify rancid ingredients with a single sniff.

Rather, she is a professional food designer — skilled in building flavors and textures, versed in arcana like the aftertastes of alternative sweeteners and the umami of dried yeasts. She has a foot in the worlds of food safety, processing and packaging, and supermarket shelf stability. A student of food trends and innovations, she is also a sought-after judge, with a specialty in dairy products.

Her sense of taste is so keen that one client, Chris Spencer of UpStar ice cream, says she has "the million-dollar palate."

Remarkably, it comes without a million-dollar attitude. Rarely the center of attention, Ms. Masoni has a down-to-earth, slightly nerdy charm, like the shy kid in class who surprises you with her witty insights.

That may be because Ms. Masoni, 54, honed her talents while working behind the scenes within big organizations: She has graded cheese for the United States Department of Agriculture, built better Gardenburgers and spent a summer working in the main General Mills research center in Golden Valley, Minn., just across the Mississippi River from her hometown, St. Paul.

Now she works as the "wizard of Oz behind the curtain," as she put it, for paying companies large and small. 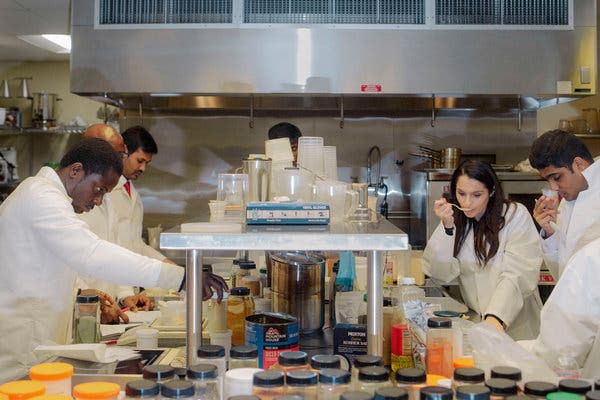 A class works on a soup recipe at the Food Innovation Center in Portland, Ore.CreditJohn Taggart for The New York Times

The Food Innovation Center, a multidisciplinary partnership with the Oregon Department of Agriculture, is one of several similar extension programs at universities like Rutgers and Louisiana State. With Ms. Masoni's help, Oregon's is extremely successful, luring not just food makers and farmers from the Northwest, but also international conglomerates that keep their work there hush-hush.

While every client pays the same hourly rate set by the university, Ms. Masoni gives smaller producers a lot for little money through one-hour consulting sessions. They leave with "a huge list" of resources and to-dos, she said, and a request to report back once those have been completed.

"She probably touches more companies than anyone else I've worked with," said Ron Tanner, a vice president of the Specialty Food Association, which flies Ms. Masoni to New York each year to judge the awards for its annual Fancy Food Shows.

It doesn't hurt that the center — just across the street from the Willamette River, in this city's booming Pearl District — is in the heart of one the country's most innovative food cities, where word of Ms. Masoni's skills has spread by word of mouth.

"Every store in Portland, you would see stuff that I've worked on," said Ms. Masoni, whose successes include Bob's Red Mill oatmeal cups; Chedz cheese straws; Eliot's Adult Nut Butters; Choi's kimchi; and ice cream sandwiches from Ruby Jewel, which started in the center's incubator kitchen for new entrepreneurs and now has a 10,000-square-foot factory.

Her most recent projects include writing tasting notes for cheese curds from the new TMK Creamery in Canby, Ore.; helping a Japanese company produce and package four fruit flavors of a fermented egg-white drink called Eggurt; developing a cookbook for Oregon's specialty crops; and visiting supermarkets to help client companies come up with new uses for seaweed and dehydrated vegetable powders.

You won't find her name on the package of any product, Ms. Masoni said, but she is fine with that. "It's really my job to help people make their dreams come true."

That's what she did for Kim Malek, the founder and an owner of Salt & Straw, an ice cream chain whose experimental flavors (pear and blue cheese, strawberry with honey-balsamic vinegar and black pepper) and around-the-block lines wouldn't exist without Ms. Masoni.

"She has the uncommon combination of being brilliant and completely disarming," said Ms. Malek, a former corporate marketer who revealed her dream to run a scoop shop over a meal at the Dockside Saloon, the Portland dive where Ms. Masoni likes to take clients. (Ms. Masoni enjoys the hash browns, and the restaurant's role in the Tonya Harding-Nancy Kerrigan scandal: Key evidence was found in its dumpster.)

Working with Ms. Malek on the weekends, Ms. Masoni developed Salt & Straw's founding flavors, secured connections with local dairies and helped produce the first retail batches in the center's incubator. She then took the company's younger co-owner, Ms. Malek's cousin Tyler Malek, "under her wing," said Ms. Malek, so he could become a skilled ice-cream maker on his own.

What was most impressive, Ms. Malek said, is that Ms. Masoni could go directly from blue-sky brainstorming — "this is the spirit of flavors and what we want to be about" — to pitch-perfect recipes for ice creams that have become nationally known.

Ms. Masoni worked similar magic with the Portland chef Vitaly Paley. When he set out to create an energy bar with wholesome ingredients 14 years ago, he said, "I didn't even know how to start."

Working only from his description of a target flavor profile, Ms. Masoni blended organic fruits and Oregon hazelnuts to make the Fruity Nut Paley Bar, incorporating a little oat bran to keep it from being sticky. She also helped get the bars onto supermarket shelves by advising on nutrition labeling and other mass-production issues.

The product got "a new life," Mr. Paley, said, when a buyer for a cheese shop tasted one at a dinner. Now the Fruity Nut bar is also made in attractive slabs that regional grocers sell as an accompaniment for cheese.

Ms. Masoni has had a lifetime to accumulate expertise: Her grandparents ran creameries on the West Coast, and her father, Edmund Zottola, was a professor of food science at the University of Minnesota who talked shop every night at dinner. He once took the family on European tour of dairies, where the young Ms. Masoni stayed with the owners of the Laughing Cow processed-cheese company.

Her Proustian-madeleine moments reveal that food production was probably her path from the start: She recalls watching an episode of the 1960s sitcom "That Girl" when she was about 5; a penniless Marlo Thomas made tomato soup at the Automat using only packets of ketchup and hot water. ("I was like, 'Woah, that is so cool!'")

Other pivotal memories include the introduction of the Egg McMuffin in the 1970s and of the Hardee's cinnamon-raisin biscuit in the 1980s. Even then, she recognized that both breakfast items were breakthroughs.

As an undergraduate, Ms. Masoni minored in food science, but her major was art. That has served her well. "I look at food ingredients as colors," she said. "I know the flavors of things and the textures, and I can just sort of pull it together. Half the time, I don't even know how I know."

What she doesn't know, others at the center likely do: Her colleagues include professors with expertise in food packaging or toxicology; a sensory-science team that conducts blind consumer product testing; and international trade managers who travel the world on behalf of the Oregon agriculture department.

It helps that Ms. Masoni usually tells it as she sees it, said Stephanie Clark, a professor of food science and human nutrition at Iowa State University who manages the technical judges for the annual awards given by the American Cheese Society. Ms. Masoni is one of only about 60 people in the country qualified to be technical judges, and one of the most honest with her feedback, Ms. Clark said. "Sometimes it's almost like, 'I can't believe you just said that.'"

It's perhaps easier to be honest as an outsider, one of the advantages of working with many companies rather than running your own.

That's a lesson Ms. Masoni learned making brie at Blue Heron French Cheese in Tillamook, Ore., after graduating from college. One day she anxiously waited 12 hours for the cultures to grow in 300 gallons of milk, a process that usually takes 40 minutes.

"Oh, my god," Ms. Masoni recalled thinking, "this is way too much responsibility."

An earlier version of this article misidentified the university where Sarah Masoni's father, Edmund Zottola, was a professor of food science. It was the University of Minnesota, not St. Paul.