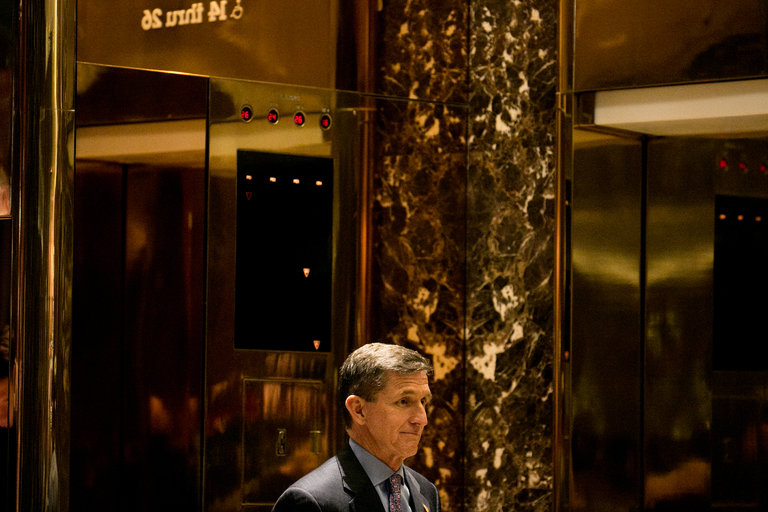 An immunity deal would make it impossible for the Justice Department to prosecute Michael T. Flynn.

WASHINGTON — Michael T. Flynn, the former national security adviser, has offered to be interviewed by House and Senate investigators who are examining the Trump campaign's ties to Russia in exchange for immunity from prosecution, according to his lawyer and a congressional official.

But the congressional official said investigators were unwilling to broker a deal with Mr. Flynn — who resigned last month for misleading White House officials about his contacts with Russia's ambassador to the United States — until they are further along in their inquiries and they better understand what information Mr. Flynn might offer as part of a deal.

In a statement on Thursday evening, Mr. Flynn's lawyer confirmed discussions with the House and Senate intelligence committees about possible testimony by his client. The lawyer, Robert Kelner, did not provide specifics about the terms under which Mr. Flynn would testify, but said that "no reasonable person, who has the benefit of advice from counsel, would submit to questioning in such a highly politicized, witch-hunt environment without assurances against unfair prosecution."

"General Flynn certainly has a story to tell, and he very much wants to tell it, should circumstances permit," the statement said.

The F.B.I. is investigating whether any of President Trump's advisers colluded with the Russian government in its efforts to disrupt the 2016 presidential election. An immunity deal would make it extraordinarily difficult for the Justice Department to prosecute Mr. Flynn.

It is unclear whether any of Mr. Trump's other former advisers have asked for immunity from the congressional committees.

Congress normally avoids doing anything that could disrupt a federal investigation. Federal law allows the Justice Department to delay a congressional immunity deal but not block it outright.

The Justice Department declined to comment on Thursday evening.

Some experts cautioned against drawing hasty conclusions about Mr. Flynn's request for immunity.

"At this early stage, I wouldn't read anything into this request beyond smart lawyering," said Mark Zaid, a Washington lawyer who specializes in national security cases. "In such a politically charged, high-profile national security case, I couldn't imagine not first asking for immunity."

"I would suspect both Congress and the F.B.I. will first generate additional evidence from smaller players before deciding to immunize General Flynn," Mr. Zaid said.

Mr. Flynn, a retired three-star Army general and former head of the Defense Intelligence Agency, was one of Mr. Trump's earliest advisers on national security issues during the presidential campaign. He drew attention for his strident attacks against former Secretary of State Hillary Clinton, as well as for his advocacy of forging closer ties to the Russian government.

He has long argued that the United States and Russia have many common interests, including combating terrorism, and in December 2015 he attended a gala in Moscow during which he sat next to President Vladimir V. Putin of Russia.

But it was his contacts with Russian officials that ultimately led to his short tenure as Mr. Trump's national security adviser. Specifically, Mr. Flynn had several phone conversations late last year with Sergey I. Kislyak, the Russian ambassador. In one of the calls, the two men discussed sanctions that the Obama administration imposed on Russia in response to the Russian government's efforts to disrupt the presidential election.

Mr. Flynn misled some White House officials, including Vice President Mike Pence, about the substance of the phone calls, saying that he and the ambassador had only exchanged holiday pleasantries.

He resigned from the job in mid-February, saying in a statement that he had given the vice president and others "incomplete information" about the conversations with Mr. Kislyak.

A version of this article appears in print on March 31, 2017, on Page A14 of the New York edition with the headline: Flynn Seeks Immunity to Testify on Russia.