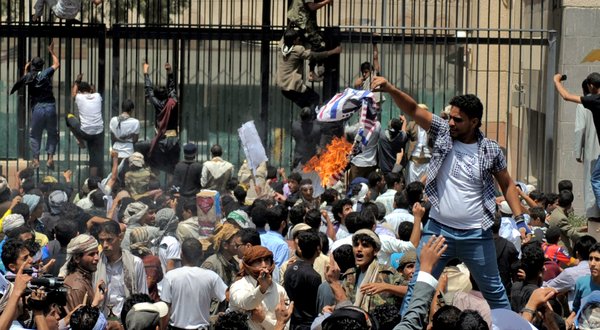 Protesters sought to storm the United States embassy during a protest against an anti-Islamic film in Sana on Thursday.

News reports also spoke of a separate protest in Tehran, where around 500 Iranians chanting “Death to America” tried to converge on the Swiss Embassy, which handles United States interests in the absence of formal diplomatic relations with Washington. Hundreds of police officers held the crowds back from the diplomatic compound, which Swiss officials had evacuated as a precaution, Agence France-Presse said.

For a third straight day, protesters scuffled with police in Cairo, news reports said, while in Iraq, a militant Shiite group, Asaib Ahl al-Haq, once known for its violent attacks on Americans and other Westerners, said the video “will put all American interests in danger.”

In Sana, witnesses said Yemeni security forces had tried to disperse a crowd at the fortified embassy compound in the east of Sana, the capital. But protesters broke through an outer perimeter protecting the embassy, clambering over a high wall and setting fire to a building.

They were forced to retreat after trying to plunder furniture and computers, the witnesses said.

Security forces guarding the embassy fired into the air as protesters set fire to two vehicles and burned tires. Protesters tore down and burned an American flag, replacing it with their own banner proclaiming the Islamic faith, witnesses said.

There were no immediate reports of American casualties or that the protesters had managed to breach the main diplomatic buildings within the compound. Yemeni officials said an unspecified number of protesters were wounded and some were arrested. Hours after the attack started, smoke still rose from the area.

By early afternoon, one witness, Yahya Yousef, who lives opposite the embassy, said: “Now almost everyone is out, and firing has ceased. We saw protesters getting out with some stuff from inside.”

The crowd gathered a day after the embassy warned Americans in a posting on its Web site that “in the wake of recent events in Libya and Egypt, there is the possibility of protests in Yemen, and specifically in the vicinity of the U.S. Embassy, in the coming days.”

“The U.S. Embassy continues to recommend that U.S. citizens avoid large gatherings. Even demonstrations or events intended to be peaceful can turn confrontational and possibly escalate into violence.  U.S. citizens in Yemen are urged to monitor local news reports and to plan their activities accordingly,” the Web posting said.

Mohammed Albasha, a spokesman for Yemen’s embassy in Washington, D.C., said the government strongly condemned the attack on the United States embassy in Sana, and he said that there were no reported casualties.

“Given recent regional events, earlier this morning, angry protestors have unfortunately flooded the security perimeter of the U.S. embassy” there, breaching the wall, he said in a statement. “The government of Yemen will honor international obligations to ensure the safety of diplomats and will step up security presence around all foreign missions.”

With American Marines and naval vessels heading for Libya, where the American ambassador, J. Christopher Stevens, and three of his staff were killed on Tuesday in an attack on the United States consulate, and new crowds reported gathering in Tunis and Cairo overnight, the reports from Yemen added to the already volatile mix of passions that have commingled with the initial exuberance of the so-called Arab Spring.

“What happened is unacceptable, rejected. The Prophet Muhammad taught us to respect human life," Bloomberg News quoted Mr. Morsi as saying. But he also warned against maligning Islam’s founding prophet. “The Prophet Muhammad and Islamic sanctities are red lines for all of us.”

Little is known about the origin of the video that provoked the protests. It was made in obscurity somewhere in Southern California, and promoted by a network of right-wing Christians with a history of animosity directed toward Muslims. When a 14-minute trailer of it was posted on YouTube in June, it was barely noticed.

But when the amateurish video was translated into Arabic and reposted twice on YouTube in the days before Sept. 11, and promoted by leaders of the Coptic diaspora in the United States, it drew nearly one million views and set off bloody demonstrations.

The initial eruption of protests in Egypt and Libya came on the anniversary of the Sept. 11, 2001 attacks in the United States.

Referring to the killings in Benghazi, American and European officials said on Wednesday that while many details about the attack remained unclear, the assailants seemed organized, well trained and heavily armed and they appeared to have at least some level of advance planning.  But the officials cautioned that it was too soon to tell whether the attack was related to the Sept. 11 commemoration.

On that same day in Yemen this week, a car bomb exploded on Tuesday alongside a convoy of vehicles used by Yemen’s defense minister, killing seven bodyguards and five civilians in the heart of the capital, while the minister escaped unharmed, government and hospital officials said. The attack came one day after a top operative of Al Qaeda in Yemen was killed in what Yemeni officials called an American drone strike.

Those episodes and the violence on Thursday spoke to the continued volatility in poverty-stricken Yemen, where the United States is seeking to eradicate militant cells held responsible for a number of conspiracies, including an attempt by an operative of Al Qaeda to detonate a bomb hidden in his clothes on a flight bound for Detroit in December 2009.

The blast on Tuesday in downtown Sana tore through a thoroughfare between the cabinet office and the state radio building, shattering buildings and wrecking a vehicle carrying the seven bodyguards, seconds after the minister himself, Maj. Gen. Mohammed Nasser Ahmed, had passed by in another vehicle after a weekly cabinet meeting.