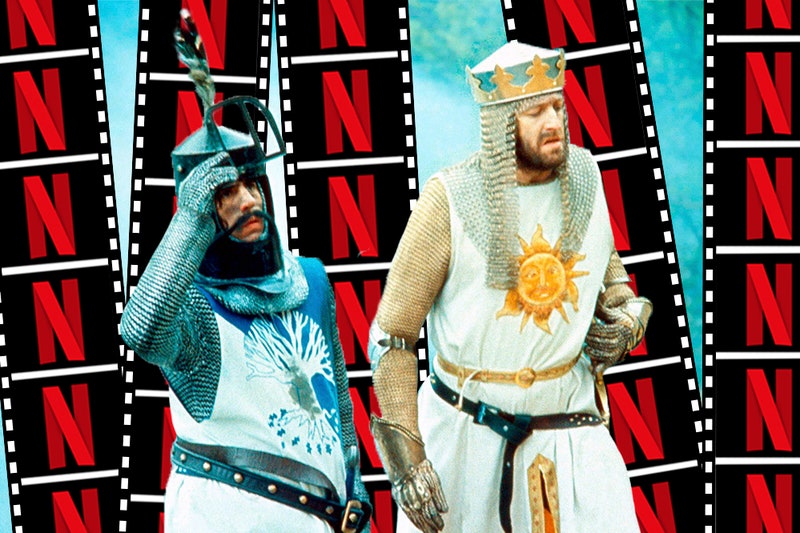 The word "shrubbery" is dead. I'm not sure how often it was used before 1975, when the British comedy troupe Monty Python released Monty Python and the Holy Grail, but hence, a not insignificant amount of people won't be able to say it without the urge to raise their voice a pitch. There are people who can't see a coconut without yammering on about swallows. Who can't be injured without hollering, "It's just a flesh wound." Who, out of nowhere, will yell "ni!" As adults, they're insufferable, but as kids I was one of many.

Monty Python and the Holy Grail, which is now streaming on Netflix, remains a funny film by a group of English comedians that have become synecdoche for a postwar, absurd, self-deprecating kind of humor. It also was (and is) a code for a certain group of kids. Mostly middle and upper class, mostly white (though my Indian dad is still the one who will randomly quote other Monty Python sketches to me), mostly those who considered themselves outcasts, or those with a flair for theatrics. These were rarely the jocks, but those for whom donning an English accent and making absurdist jokes about medieval kings was the height of humor. Though it wasn't universal, it was omnipresent. At other schools or camp or anywhere you had to awkwardly meet other kids, saying "run away!" with the right intonation was a secret signal that you were in the club too. Before we knew the name for it, it was a meme.

If you grew up in the '90s, you were likely introduced to the film by your parents, who were young and cool when it came out. "I was a dweeby theater kid so obviously I had a Monty Python phase, but actually I inherited it from my parents who used to have a bunch of the sketches on records that they would listen to," says Kendra Wells, 27. They became obsessed, starting a SPAM Club in middle school. "I think it struck a chord with us as 12-year-olds because a lot of it was similar to the 'randomness' phase of humor that was popular around then."

It makes sense that Monty Python's intensely quotable movie would resonate with children. As former GQ editor Ashley Fetters writes in The Atlantic, kids tend to learn the format and cadence of jokes before worrying about any of the content. And on top of their physical comedy, Monty Python excelled at goofy, nonsensical words delivered in the style of jokes. Looking back at the film, the parts I quoted the most as a kid aren't actually the funniest to me now. When you're young, a treatise on a monarchy's exploitation of the working people just isn't as funny as "a møøse bit my sister." Either way, it taught us how to be funny.

It wasn't just that it was intensely quotable, though. So was Ace Ventura. It was the type of humor that, then and now, made those of us who participated in it feel both unique and part of something bigger. "I felt it was a window into grown-up humor, and a 'secret' code to find the other nerdy-cool kids who also appreciated it," says Jenn, whose middle-school-aged daughter is now as obsessed as she was. Another fan, Blair, says she happened to be going through a medievalist phase when she saw it, so it became something that resonated on multiple levels.

The primary memory I have of adolescence—besides the horniness—is a desperate fear of being the Only One of something. Being understood by everyone felt boring and slightly anxiety-inducing, like they were about to pull the rug out from under you. But feeling understood by no one felt like death. So I clung to the pieces of culture that took me to that oasis where someone-but-not-everyone got me, where I could feel the satisfaction of it being me against the world, but with some backup. Because no matter how much we crow about individualism, we need community. And when you're 12 and feel alienated from your parents and mainstream culture and politics, it's more important than just about anything, and you'll build it out of whatever you can find.

I've mostly grown out of this feeling, though many haven't, clinging to cultural touchstones like Holy Grail as if they signal some deeper, intellectual superiority that's at risk of being stolen and misunderstood by the masses. "Too many boys who grew up to be incels could quote that movie with me," says Kathleen, whose mother introduced her to the film. "But it felt so much like a family secret. A language only we understood. I can text my mom, 'And that, my liege, is how we know the earth to be banana-shaped' and she will, without fail, send back the response from King Arthur."

Asking around, it seems that Monty Python and the Holy Grail is not dead yet. Jenn's daughter sees the film as "a Rosetta Stone to adult humor." One mother, Abigail, said her son recently went on a Boy Scout camping trip, during which he and a friend grabbed a wheelbarrow and started bellowing "bring out your dead!" Another friend tweeted me a photo of his nephew dressed as Tim for Halloween.

Monty Python and the Holy Grail is on its third or so generation of teenagers, and it probably won't resonate forever. But there's a reason it warms my heart to watch kids floss or yell "what are thoooose" or whatever the thing is now. It's the same thing. The Holy Grail was the first time I understood, though I didn't have the language, that memes were about community building. Not following a trend to fit in, but sending out a signal hoping someone else would pick it up. I hope it lives on long after we've all been sacked.