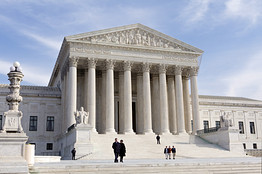 The U.S. Supreme Court’s recent landmark rulings on health care and immigration have made the nation’s highest court a topic at kitchen tables, coffee shops, and water coolers across the country.

But even with all that debate over the Supreme Court and its rulings,  two-thirds of Americans can’t name any justices, according to a survey released Monday by FindLaw.com, a legal information Web site.

The most well-known member of the court was Chief Justice John Roberts, the survey showed. But even Justice Roberts could only be named by 20% of the respondents.

The most anonymous member of the court, according to the survey, was Stephen Breyer, with 3% of respondents naming him. Justices Anthony Kennedy (10%), Samuel Alito (5%) and Elena Kagan (4%) each were named by 10% or fewer of the people surveyed.

The survey showed that others–even those in much the media spotlight– were somewhere between little-known and obscure:

The study polled 1,000 American adults by telephone, according to FindLaw.com, a division of Thomson Reuters. The survey had a margin of error of plus-or-minus-three percent.