In terms of content, Father's Day cards emphasized supporting the family economically, imparting practical lessons, and being the best—far more "Number One Dad" or "Best Dad Ever" sort of cards than mothers had. "It was like they needed an award, but there wasn't a lot of depth in what they were achieving," says Auster-Gussman, a doctoral candidate in social psychology at the University of Minnesota.

In contrast, Mother's Day cards focused a lot more on what the mothers were doing for their children. The cards in the study that mentioned "the little things you do" were, without exception, Mother's Day cards, and cards that talked about making a child feel loved were much more likely to be for moms, too.

Eight years later, my batch of cards indicated that the messages haven't gotten much subtler. Many Mother's Day cards featured chores, or referenced how much mothers are expected to do for their kids. Father's Day cards evoked leadership or strength, or portrayed the dad as a superhero (though there were a couple superhero mom cards, too.)

Cards for both genders jokingly suggested that parents turn to drink to cope with the stresses of raising kids—though in card-world, dads are always drinking beer, while moms love wine and cocktails, seemingly without exception. (A public health study from 1980  expressed concern that greeting cards regularly suggest that "getting drunk is a natural and desirable concomitant of celebrations and that drunkenness is humorous, enjoyable, and harmless.")

The fancier, more expensive cards for moms tended to feature rhinestones (a bejeweled dragonfly, in one notable example of Mother's Day trope synergy), while high-end cards for dads were often given natural textures like leather or twine, or, once, the whole front flap was just a piece of wood. ("A strong father makes a strong family," it read.)

There were many, many calls for moms to take the holiday to relax for once—by any means necessary. "This Mother's Day, put out the 'Do Not Disturb' sign, lock the door, kick your feet up, and enjoy the peace and quiet," one card read. And on the inside: "…until they find a way in through the air ducts." 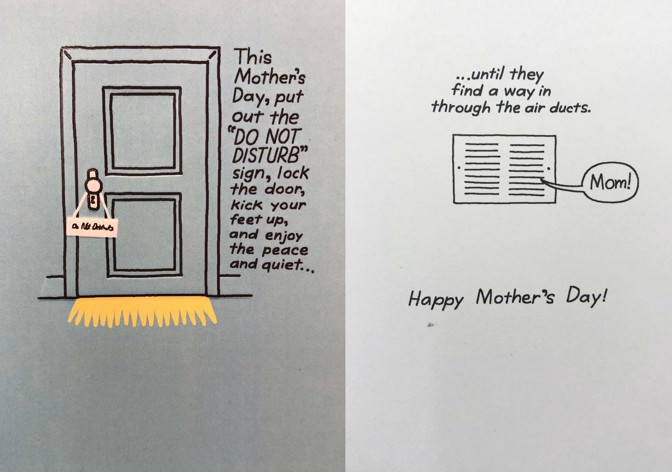 "It seems to me they're saying you've got this one day where you have the right to have a glass of wine, lock yourself in the bathroom, and not let anybody else in, but it's only going to be a day," Alexandra Jaffe says of the cards I showed her. Jaffe is a linguistic anthropologist at California State University, Long Beach, who has studied greeting cards. "Because the other 364 days, no one else in the family is going to do those things for you."