The devastation wrought by a landslide and flooding in Trujillo, in northern Peru. Mudslides in the country have destroyed 14,000 homes and killed more than 100 people.

BARBA BLANCA, Peru — A sheet of mud covers the village. Lampposts are bent sideways. Rooftops sit blocks from their homes. The nave of the village church is filled with sludge.

A catastrophic mudslide essentially erased Barba Blanca from the map last month. Yet somehow all 150 people who lived here in this Peruvian village managed to escape.

"A miracle," said Diego Blanco, a 27-year-old construction worker, looking out from a hillside perch onto the ruined homes of his family members.

Large parts of South America have been pummeled for weeks by torrential rains that are wreaking havoc throughout the western region of the continent. Floods and destructive mudslides in Peru, Ecuador and Colombia have killed hundreds and displaced thousands more. 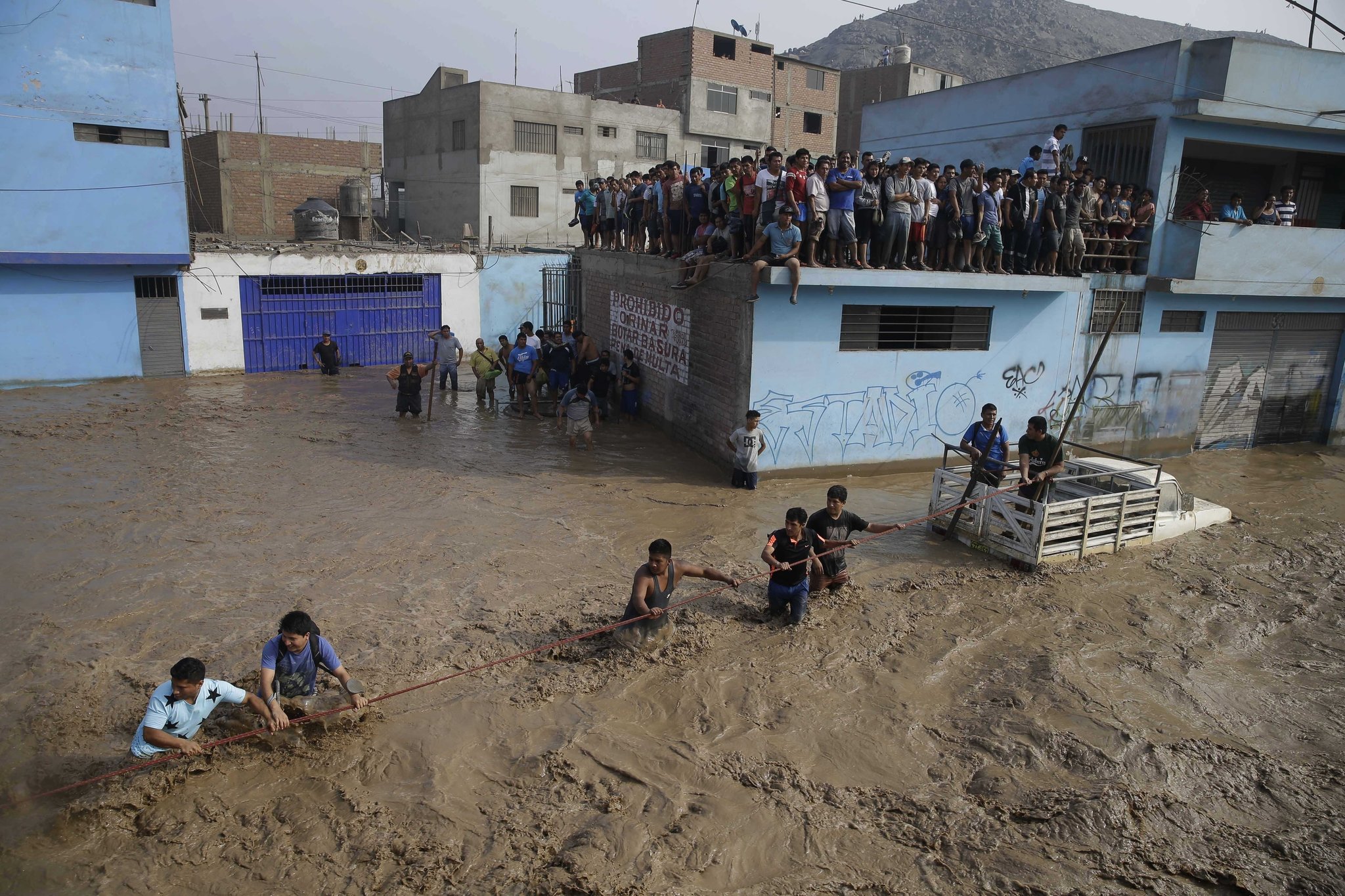 Residents held onto a rope as they walked to safety in Lima, Peru's capital, during flooding in mid-March. There appears to be no end in sight to the destructive weather until the wet season finishes in May.

On Saturday, parts of Mocoa, a city in southern Colombia, were leveled by a torrent of water and debris that so far has left at least 293 people dead. Communities in Bolivia and Ecuador have been battered as well.

In Peru, mudslides have destroyed 14,000 homes, left 150,000 homeless and killed more than 100 people, with many others still missing. While the government has declared a state of emergency and asked for international aid, there appears to be no end in sight until the wet season concludes in May.

The calamities have drawn jitters among some of the region's leaders who believe that the rains are linked to climate change. Rising temperatures have already led to the retreat of glaciers in the Andes and large shifts in crop cycles in Peru. On Saturday, Colombia's president, Juan Manuel Santos, said during a visit to Mocoa that the mudslide was the latest consequence.

"We are confronting a natural disaster caused by climate change," he said. "We need to prepare because the rains that are coming will be more intense."

The wreckage in Peru points to an even larger problem in this part of the world: Years of economic expansion in Latin America have spurred migration and development, but these changes have not been buttressed by preparation for even the most basic natural disasters.

Peru is a prime example, experts say. Growth since the early 2000s drew thousands from rural areas to coastal desert towns and into new settlements on the outskirts of Lima looking for jobs. Many of the newcomers founded squatters' towns on the fringes of cities.

Leopoldo Monzón, a civil engineer and urban planning expert in Peru, said many of these areas had long been unsettled precisely because they were susceptible to flash flooding. Yet some politicians developed the lands in exchange for votes from the new arrivals.

"They never thought there would be such a flood," said Mr. Monzón, who estimates that more than 100,000 people now live in flash flooding zones around Lima alone.

Making matters worse, meteorologists say, is the arrival of a localized El Niño event, a sudden rise in ocean temperature in the Pacific, which this year has happened off the coast of South America. Normally scorched mountain towns have faced devastating mudslides, while residents of Lima, the capital, were cut off from water for five days after pumps were inundated.

The flash flooding in Peru even has a local name, huaycos, a Quechua word referring to the dry valleys where the severe floods appear without warning. 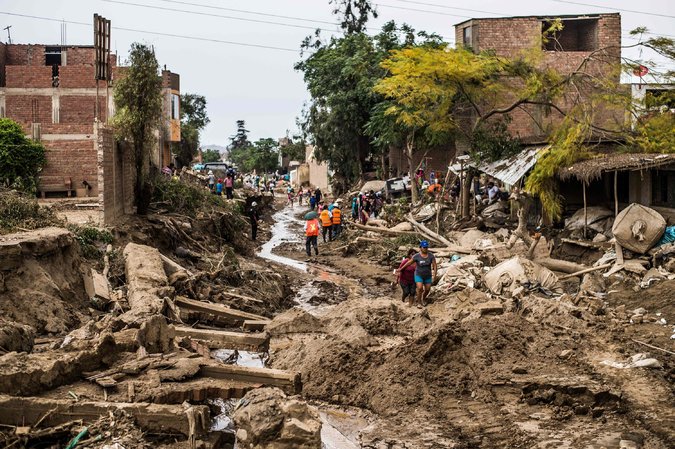 The damage caused by flash flooding in Huachipa, a district east of Lima. The government has declared a state of emergency and asked for international aid.

"The desert is becoming tropical for a period," explained Abraham Levy, a Peruvian weather expert, saying that this year's floods were the most severe since 1997 and 1998, when the last large El Niño event occurred. 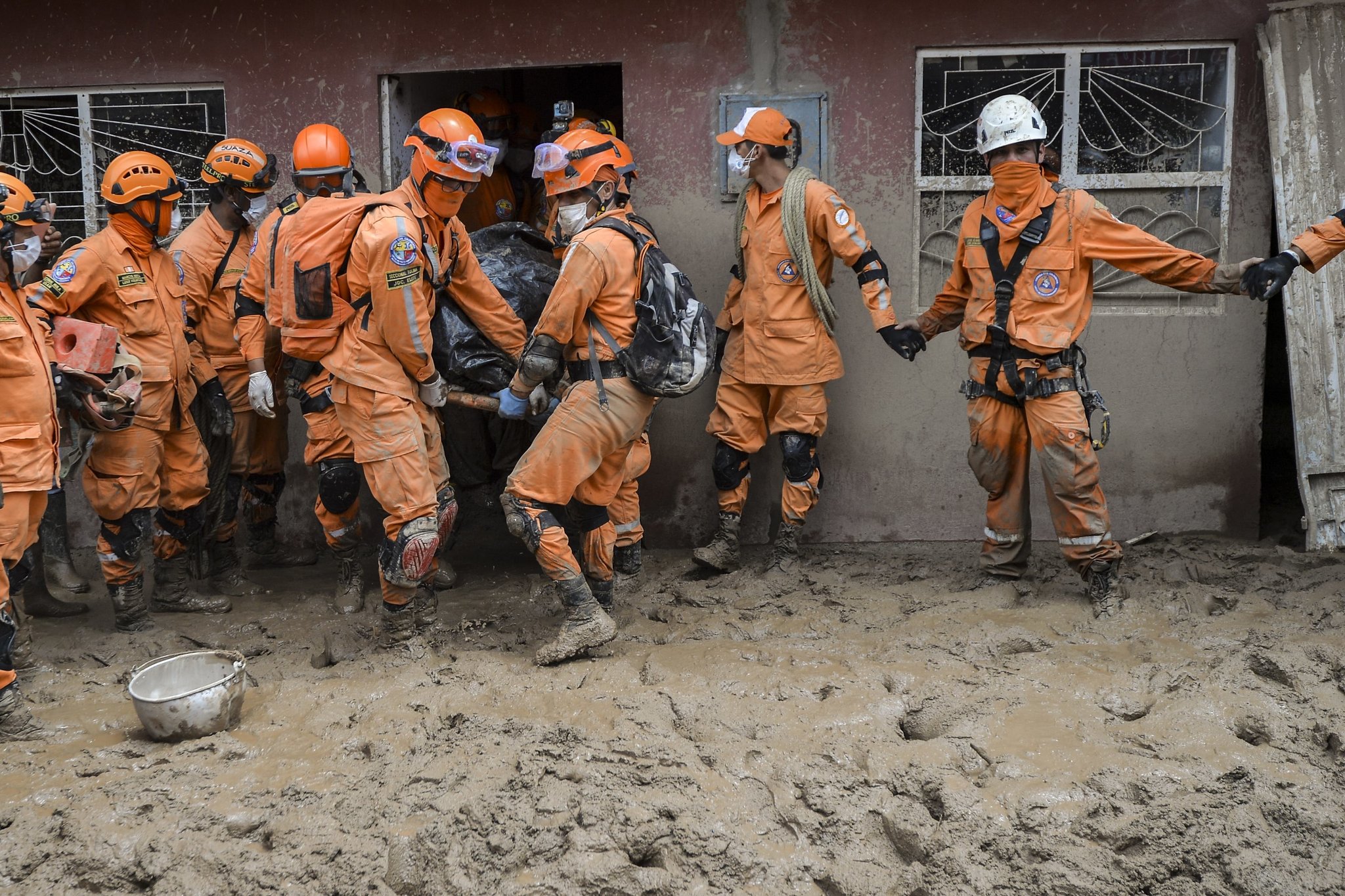 Civil defense workers removing the body of a woman who died in a mudslide in Mocoa, in southern Colombia, this month.

The destroyed village of Barba Blanca, however, had long known the risks.

Founded about a century ago, residents say, the village sits on a dry approach to the Andes Mountains and is home to hardscrabble mountain dwellers who named it after a loner with a white beard — a barba blanca, in Spanish — who lived somewhere nearby in the hills. 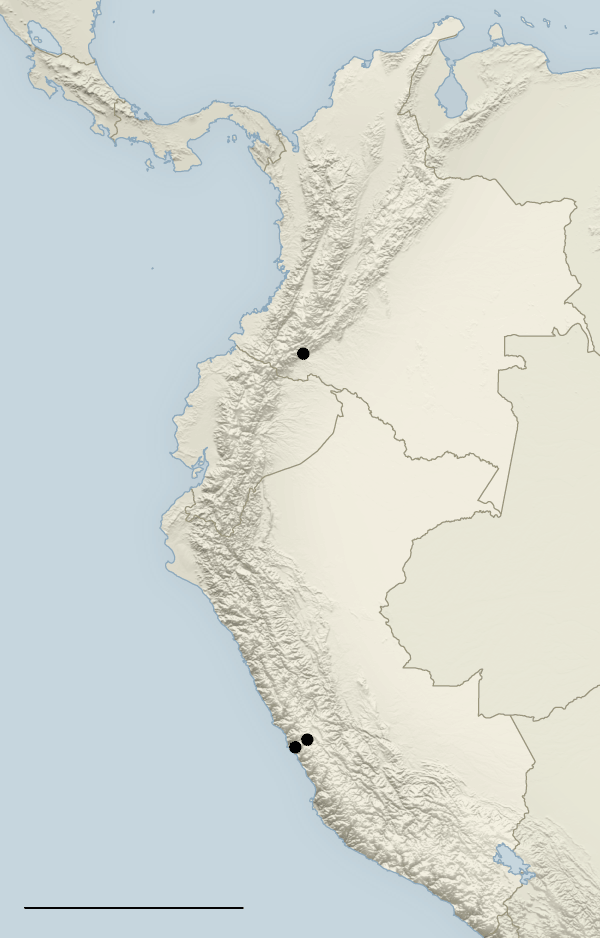 Mr. Blanco, the construction worker, was flanked by his father, Ernesto, 65, who remembered the El Niño of 1983, which sent sheets of mud sliding down a hill only a few hundred yards from the one that had recently collapsed.

"One has to be realistic," the father said, looking down on his home, which had been hit by the mud, but not destroyed. "This will just keep on happening to us."

His older son, also named Ernesto, a 29-year-old electrician, was born after the mudslide of the 1980s, but the one on March 16 is seared in his memory. The village had been pummeled by rains throughout the month, but the downpour that afternoon was the heaviest yet, and people were growing anxious. 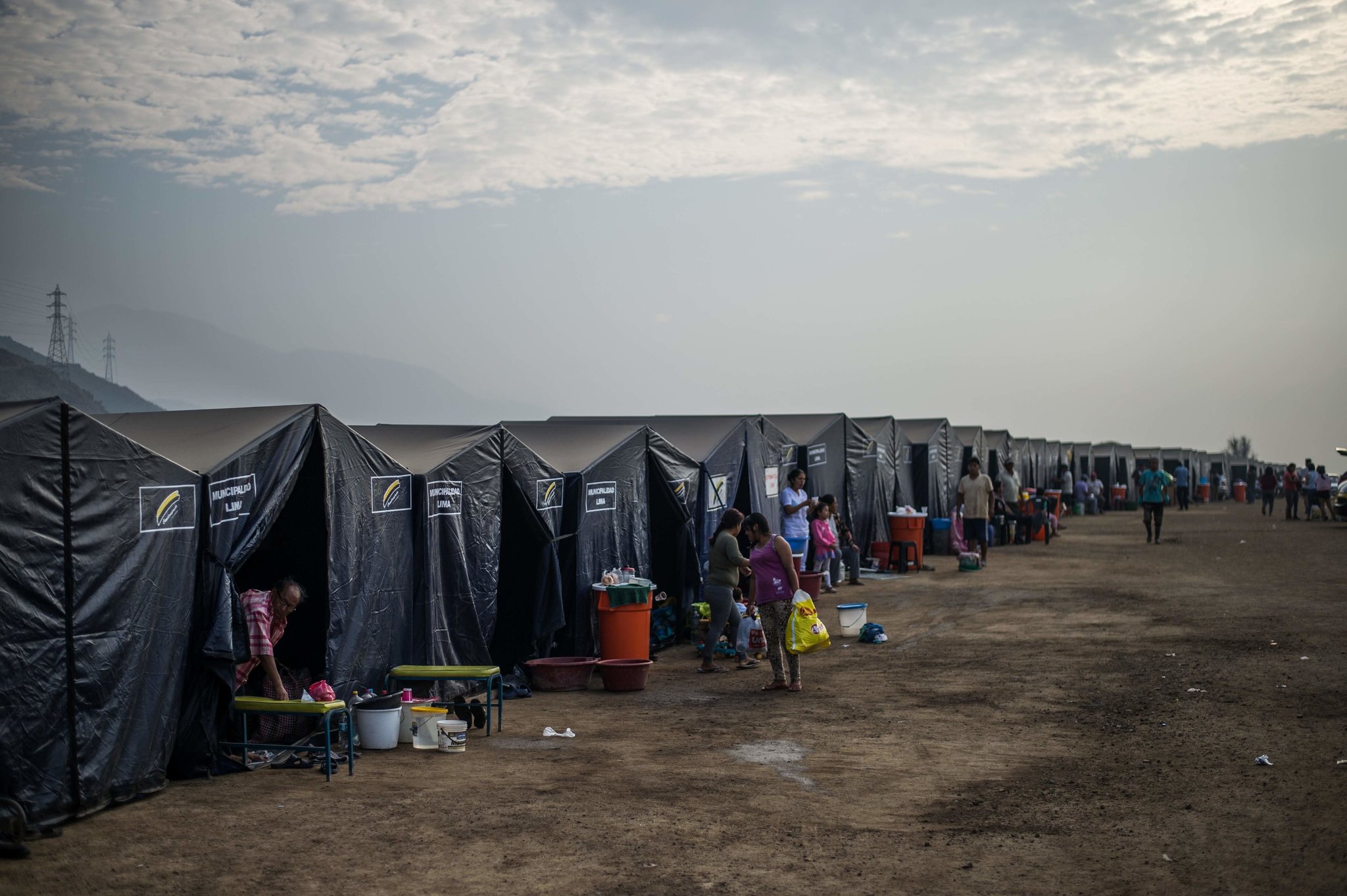 A camp for evacuated residents set up by the authorities and volunteers in the district of Huachipa. Mudslides have left 150,000 people homeless in Peru.

Suddenly, he said, he could hear the sound of rock and mud coming down the hillside. He ran for his home and grabbed his 3-year-old daughter as his wife and two other children followed. Soon, everyone was running for higher ground.

"The amount of mud I was seeing, I never had seen before," he said. "And it was coming in waves."

In another part of the village, María Lazera Castrillón, a 75-year-old retiree, was starting her lunch in the home she shared with her brother when she heard the roar of the mud. She and her brother joined the flight of villagers uphill, stumbling as they went.

"I left everything, including all my money, in that house," she said, gesturing to the buried home downhill. 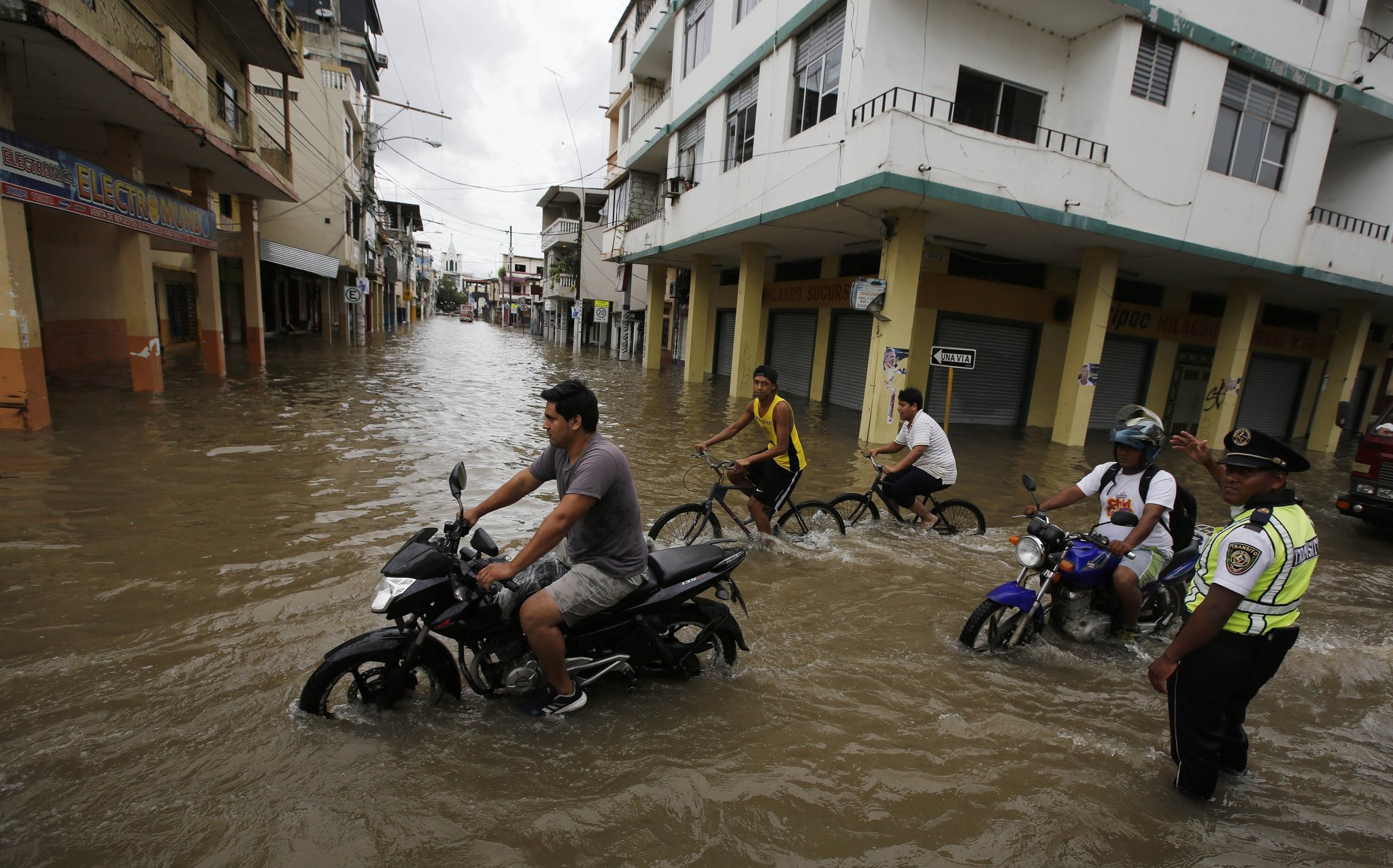 Flooding in Milagro, Ecuador, after heavy rains caused rivers to jump their banks in late March.

The villagers made it to safety and by evening took shelter in a small building owned by a nearby hydroelectric plant uphill. But the sun had set, and no one was able to see what had become of Barba Blanca.

Most people from the village were unable to sleep that night, the younger Ernesto Blanco said. As the sun rose the next day, nearly all the residents packed onto a lookout point above the village to see what had happened to their homes.

"To suddenly see the whole village covered," said Aurora Escalante, a 60-year-old farmer, beginning to weep. "It was too much."

The villagers of Barba Blanca now face a difficult decision: Should they resettle in a region where mudslides are less common or take their chances and rebuild Barba Blanca? The mudslides may return, they know, but perhaps not for another generation. 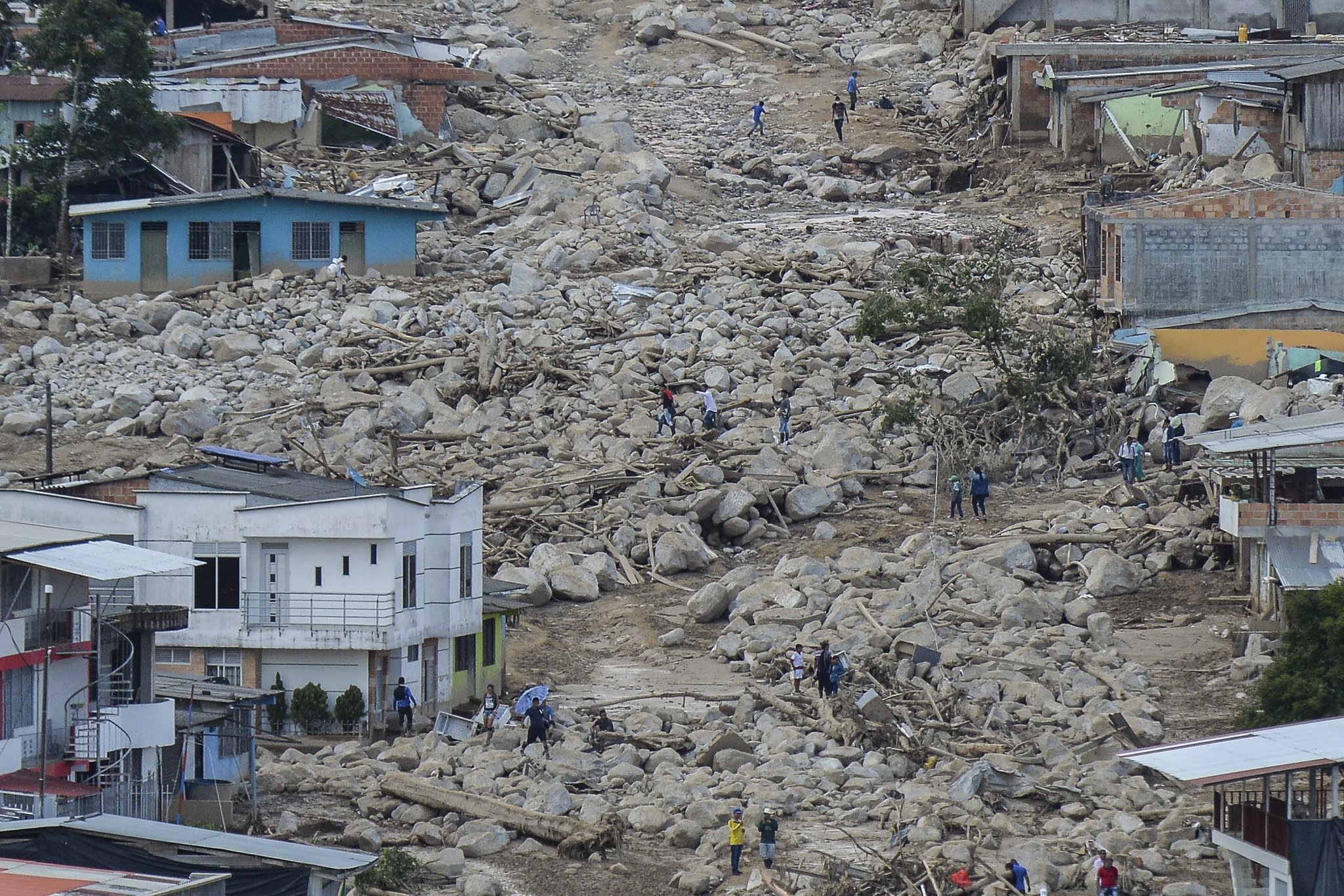 The wreckage left by the torrent of water and debris that leveled parts of Mocoa, Colombia, and killed more than 290 people.

Mr. Monzón, the engineering consultant, said the disaster could offer a chance for Peru's government to promote resettlement, especially among those living in the squatters' towns on the outskirts of Lima.

"This crisis could be an opportunity," he said.

"This is simply God telling us he exists," said the elder Ernesto Blanco, waving a hand. "Life will continue here." 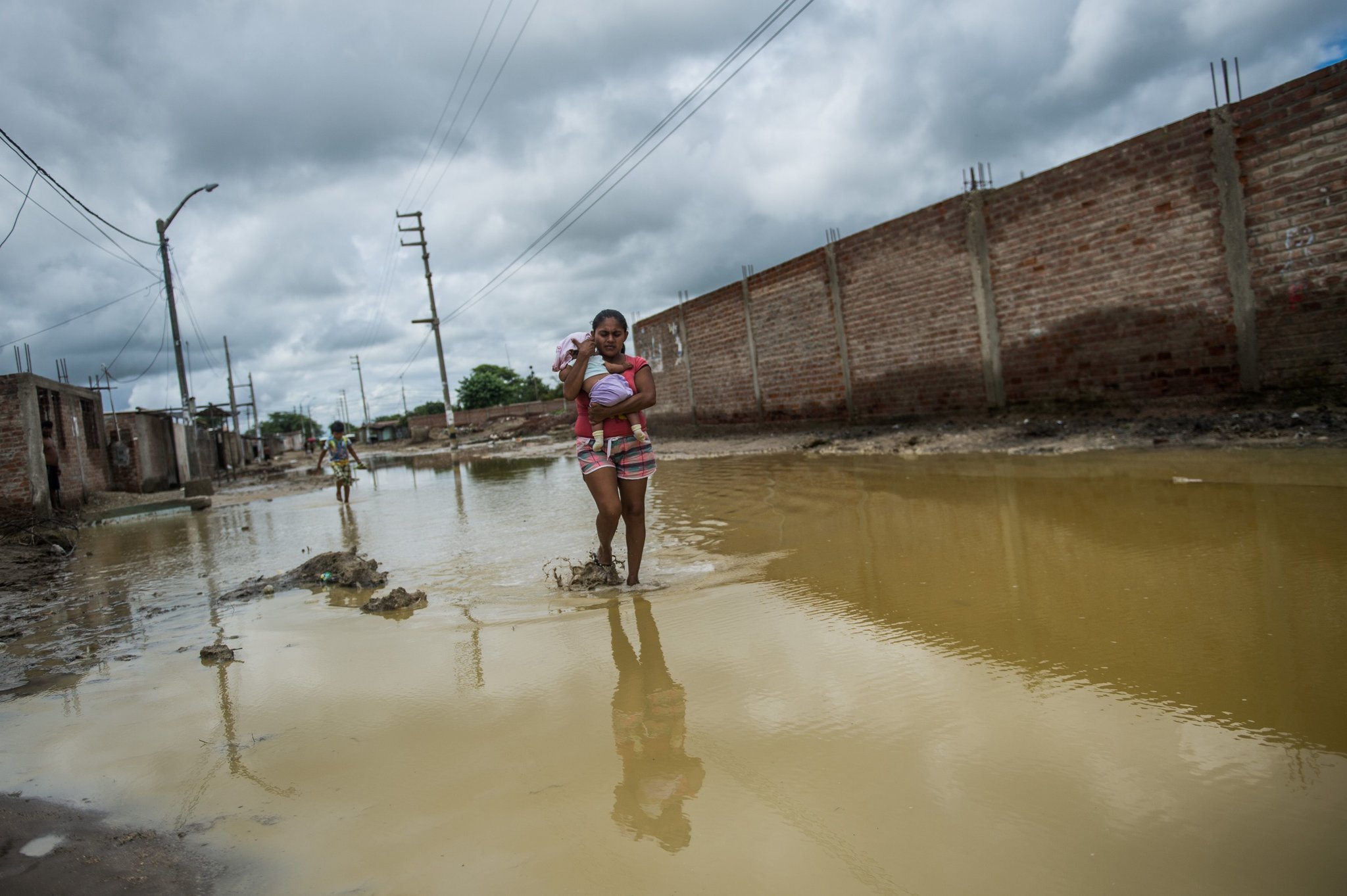 A waterlogged street in northern Peru. A localized El Niño event, a sudden rise in ocean temperature in the Pacific, has contributed to the flooding and mudslides in South America.