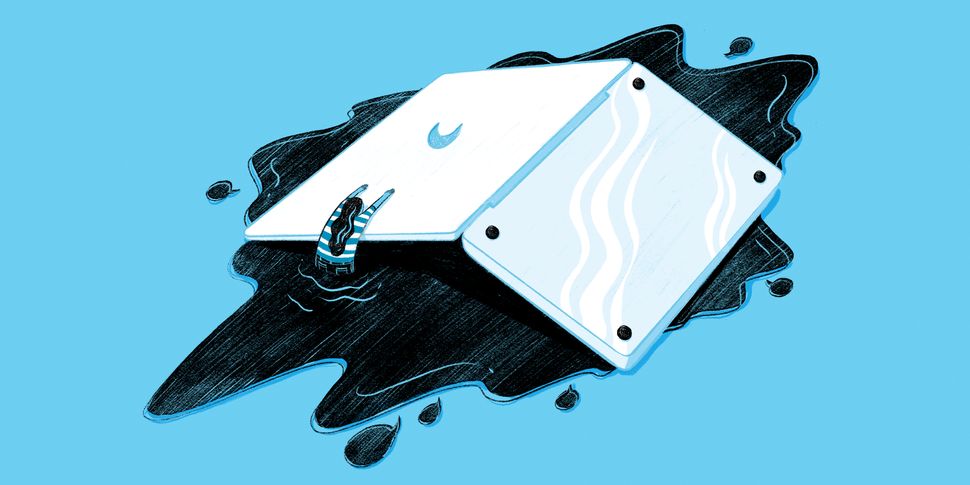 I had a father and a sister who killed themselves. I want to give you some idea of what it's like to exist on the internet on a day like last Friday — what it's like to work on the internet in the midst of the frenzied, all-consuming coverage of an event with personal resonances. And because people so rarely talk about suicide, the days on which we talk about almost nothing else hit especially hard.

This was one of the first things I saw:

I found out later that, as the news broke that Anthony Bourdain had died by suicide, Newsweek's powers-that-be instructed the staff to publish as many Bourdain-related stories as humanly possible. This was a transparent play for search-engine traffic, as revealed by the grim, opportunistic headlines that spread via social media.

Who Is Anthony Bourdain's Ex-Wife, Ottavia Busia? Chef Dead At 61

Who Is Eric Ripert, Anthony Bourdain's Friend And Fellow Chef?

There are many, many more. Newsweek's editor-in-chief was apparently delighted with the coverage, and sent out an email saying as much. But once outrage over the callousness of Newsweek's Bourdain-related articles started to bubble over, "they freaked out and deleted the tweets" and "changed all the headlines," one employee there told me.

Of course, it's not just Newsweek that does this; this is how celebrity suicides get covered now, in the attention economy. Newsweek just happened to be graceless about it. And of course, what is SEO whoring if not a funhouse reflection of how we process the news? Whether out of voyeurism or genuine concern, people search furiously for details, both about the deceased and about those around them thrown into profound pain.

Newsweek-style cynicism sat alongside earnest pleas about the importance of reducing the stigma. I watched the tweets scroll by telling you to check on the people you love, even if you think they're OK. Tweets about how suicides spike in the wake of celebrity suicides and to make sure to be there for one another and here's the number of the suicide hotline if you need it. All of these things are good and true and helpful, or at least they feel like they should be. But they also made my gut ache.

It's the ache of being reminded of what I've lost, sure, but it's also the anxiety of not knowing what to do — how to comfort those dealing with what I'm dealing with, what to tell those who have no idea what it's like but want to help, whether it's ridiculous of me to think I'm qualified for any of this in the first place.

The cynicism and the concern work together in weird ways. On a day like Friday, I end up feeling watched.

My father killed himself in 2003, a week before the new year and several weeks before I turned 14. My sister killed herself in 2012, a week before my college graduation and several more weeks before I was to move to New York. The only other time I've ever written about any of this was three years ago. I wasn't even sure I was going to post it at the time. But it was getting close to Father's Day and I felt sad, so I just started writing without thinking about much beyond that.

Until then, hardly anyone I interacted with on a daily basis knew that my father was dead or that I'd ever even had a sister in the first place, though it had only been three years since I'd lost her, my best friend and one of the most important people in my life (a fact I wish I had told her far more often than I did). If I hadn't written that piece three years ago, and if I'm being honest with myself, I'm not sure that many more people would know today. I still rarely talk about it, though enough time has passed that I can discuss my father without having to fight back tears and a growing lump in my throat. Being able to talk about my sister without the vocal quiver that elicits an I-feel-so-sad-for-you head cock, however, still feels a few years away. It's easier to just say nothing.

But I also know that piece helped others in similar situations. I still periodically get emails from survivors of suicide whose sense of isolation has suddenly thawed or from people contemplating suicide who hadn't fully considered what their death might do to those they care about. I know I should talk about my experience more than I do.

When someone famous, especially someone who means so much to so many, dies by suicide, a voice in my head screams at me to get out of my own thoughts and do something. This is the consequence of having had intimate experience with suicide. To know suicide is to be obligated forever to give witness, not just as an act of communion with people who've experienced something similar, but also as a sort of activism — haunt the conscience of people entertaining thoughts of killing themselves, act as a stand-in for their loved ones, show them what wreckage might be left in their wake.

Every suicide is personal. I watch as the entire internet begins talking about this thing that I carry with me every day, this thing that nags and pulls at me and that I know I'll always feel crouching in the corner even on my best days, even when I'm mostly able to forget. And I read about the circumstances of the death of this person I've never met, and it's tragic and sad in its own right, but I'm also reliving where I was when I found out that people I loved and needed chose to no longer exist. I read about the devastated family members they've left behind, but then, I'm also just reading about myself. And when I talk to someone about the tragic loss of this person who was so sick and in so much pain, I'm also talking about my loss and my loved ones who were so sick and in so much pain, whether anyone else realizes it or not. It's exhausting.

Earlier in the week, a tweet from TMZ popped up in my feed advertising the suicide note that Kate Spade had left for her 13-year-old daughter. I was also 13 when I read the suicide note my dad left for me, so my stomach dropped and my pulse started to race and it felt as if I was being exposed for something I couldn't put my finger on. But I clicked the link and I read the words and I felt sick imagining thousands of strangers reading the words my dad left for me, so I got up and went for a walk and tried to do anything I could to clear my head, but it didn't really help. So instead I embraced it.

I don't remember exactly when I last read the note he left me, but I know I've read it a lot. Hundreds of times. So many times that the paper has become worn and fragile and dotted with smudges from old tears I can't remember. I know it mostly by heart, and it's mostly seared into my memory, so I surprised myself when I decided to get it out on Friday and, two lines in, I wept. I'm not sure I was crying for my father, whom I continue to miss every day. And I'm not sure I was crying for my sister, whom I continue to miss every minute. I think I was crying more for the time I've lost to the grieving process and the laughter that used to come easily and how much more difficult I know days like this will always be.

If you or someone you know needs help, call 1-800-273-8255 for the National Suicide Prevention Lifeline. You can also text HOME to 741-741 for free, 24-hour support from the Crisis Text Line. Outside of the U.S., please visit the International Association for Suicide Prevention for a database of resources.