Neil Gorsuch was told he should publicly and explicitly reject Donald Trump's attacks on the independence of the judiciary on Monday, the opening day of his confirmation hearing for the supreme court.

Richard Blumenthal, a senator for Connecticut, raised the FBI's investigation of possible collusion between the Trump campaign and Russia during the presidential election - an inquiry being discussed elsewhere in Congress on Monday at the House intelligence committee hearing - as he warned of "a looming constitutional crisis".

"The possibility of the supreme court needing to enforce a subpoena against the president is no longer idle speculation," said Blumenthal, drawing comparison to a 1974 ruling by the supreme court against Richard Nixon.

In this context, the Democrat argued, the independence of the judiciary is more important than ever: "It is critical." Yet from Trump there have been "vicious and relentless attacks" on the judiciary, a threat that "comes from the man who nominated you", he told Gorsuch.

He called on Gorsuch to reject Trump's comments, not in private conversations with senators, but publicly and explicitly.

Earlier, Senate Democrats laid out their plan of attack, highlighting a case in which Gorsuch ruled against a freezing truck driver and raising questions over his stance on issues from abortion to gun rights.

Dianne Feinstein, the most senior Democrat on the Senate judiciary committee, also challenged Gorsuch's "originalist" approach to the constitution, contending that laws set down in the era of slavery must evolve for the 21st century.

The 49-year-old judge was nominated by Trump to fill the supreme court vacancy left by the February 2016 death of conservative justice Antonin Scalia. Democrats are under pressure from progressive activists to grill Gorsuch, particularly after Republicans refused to grant a hearing to Barack Obama's nominee, Merrick Garland.

Preempting some of the main Democratic and progressive charges against him, Gorsuch claimed that during a decade on the bench he had treated rich and poor equally and decided cases in favour of Native Americans seeking to protect tribal lands, victims of nuclear waste pollution, disabled students, prisoners, the accused, workers alleging civil rights violations and undocumented immigrants.

"Sometimes, too, I've ruled against such persons," he acknowledged. "My decisions have never reflected a judgment about the people before me, only a judgment about the law and the facts at issue in each particular case. A good judge can promise no more than that and a good judge should guarantee no less. For a judge that likes every outcome he reaches is probably a pretty bad judge stretching for policy results he prefers rather than those the law compels."

Speaking slowly and deliberately, the nominee gave an account of himself as a traditional family man from the American west. He paid emotional tribute to his British wife, Louise, and said: "I love you so much." She stepped forward from her seat to embrace him.

Gorsuch told the committee: "These days we sometimes hear judges cynically described as politicians in robes, seeking to enforce their own politics rather than striving to apply the law impartially. If I thought that were true, I'd hang up the robe."

He said he has seen colleagues worrying over cases, sometimes reaching answers they do not personally believe in but that the law requires. "I believe the rule of law in this nation truly is a wonder, and it's no wonder that it's the envy of the world."

Feinstein began her remarks by making reference to the obstruction of Garland. "I'm deeply disappointed that it's under these circumstances that we begin these hearings," she said. "Merrick Garland was widely regarded as a moderate mainstream nominee."

It was an issue also hammered at length by the Democratic senator Patrick Leahy, who also condemned Trump's attacks on the constitution.

Leahy said he had not yet decided how he will vote on the nomination and put it in the context of Trump's election, saying the president has "demonstrated hostility toward our constitutional rights and values" while attacking the judiciary and the press. "When the president's chief of staff says that the nominee before us 'has the vision of Donald Trump', that should concern anyone who has read the constitution or cares about the rights it protects," Leahy said.

Feinstein highlighted the case of truck driver Alphonse Maddin, who was fired when he disobeyed a supervisor and abandoned his trailer at the side of a road after the brakes froze in subzero conditions. Gorsuch - a conservative member of the Denver-based 10th US circuit court of appeals - wrote a dissenting opinion as a three-judge panel ruled last year that Maddin was wrongly dismissed and ordered he be reinstated with back pay.

Maddin, from Detroit, Michigan, told reporters last week: "This was a seven-year battle, seven different judges heard my case, one of those judges found against me - that judge was Neil Gorsuch."

Feinstein, sitting with other senators on the dais against a marble-walled backdrop, told Monday's hearing that Maddin had been stranded in freezing conditions. "It was so cold that the driver was having trouble breathing. His torso was numb and he could not feel his feet."

A week later he was fired, she said. The court found this was a violation of health and safety law. But, Feinstein noted: "Judge Gorsuch dissented and sided with the company."

Senator Dick Durbin also brought up the case, saying the driver was caught in temperatures of -14F (-25C): "Not as cold as your dissent, Judge Gorsuch."

Feinstein reeled off other concerns that offered clues as to how Democrats will question Gorsuch over the next four days. She noted that he had criticised a legal principle called the "Chevron doctrine" that requires courts to defer to federal agencies' interpretations of ambiguous laws. This, she warned, could weaken protections for clean air and water.

She highlighted the supreme court's landmark Roe v Wade case that upheld a woman's right to an abortion and, while acknowledging that Gorsuch had not ruled specifically, said: "His writings do raise questions." Trump had promised to appoint a pro-life justice who would make the overturning of Roe v Wade "automatic", she warned. Gorsuch has also written decisions that would make it harder to convict felons who possess guns, Feinstein argued. 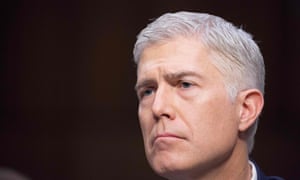 And the senator launched an attack at the fundamentals of Gorsuch's approach which, as with Scalia, attempts to interpret the words of the constitution as they were understood at the time they were written. "I find this originalist judicial philosophy to be really troubling," Feinstein said. "In essence it means the judge and court should evaluate our constitutional rights and privileges as they were understood in 1789.

"I firmly believe the American constitution is a living document intended to evolve as our country. In 1789, at the time of our founding, the American population was less than 4 million; today there are 325 million of us." In 1789 slavery was in existence, interracial marriage was illegal and the internet was unthinkable, she added.

One of the most penetrating critiques came from Democratic Senator Al Franken of Minnesota who, like Feinstein, noted that Gorsuch has suggested reevaluating the so-called Chevron doctrine, which provides that courts should be reluctant to overrule agency experts, for example when the FDA sets safety standards for prescription drugs.

"To those who subscribe to President Trump's extreme view, Chevron is the only thing standing between them and what the president's chief strategist Steve Bannon called the 'deconstruction of the administrative state' - which is shorthand for gutting any environmental or consumer protection measure that gets in the way of corporate profit margins," Franken said.

At the Conservative Political Action Conference last month, Bannon said the president's appointees were selected to bring about that deconstruction, Franken continued. "And I suspect that your nomination, given your views of Chevron, is a key part of that strategy."

The senator echoed fellow Democrats in expressing concern that Gorsuch would favour powerful corporate interests and condemning Republicans' "unprecedented obstructionism" in refusing to move forward with filling the supreme court vacancy until after the presidential election. He described it as "a truly historic dereliction of this body's duty, and a tactic as cynical as it was irresponsible".

Garland, whose hopes were dashed by last November's election, cast a long shadow over Monday's hearing, where there was no escape from hyper-partisan Washington politics. Senator Chris Coons said the "disrespect" shown by Senate Republicans to Obama and Garland was "unprecedented and deeply damaging".

Durbin, from Illinois, also went on the offensive, telling Gorsuch: "Your nomination is part of a Republican strategy to capture our judicial branch of government. That is why the Senate Republicans kept this supreme court seat vacant for more than a year and why they left 30 judicial nominees who had received bipartisan approval of this committee to die on the Senate calendar as President Obama left office."

But Republicans pushed back at the criticism. Senator Lindsey Graham of South Carolina said: "If you believe this has been a great plan to get a Trump nominee on the court you had to believe Trump was going to win to begin with. I didn't believe that. Obviously I didn't believe that, saying all things I said."

The failed Republican candidate said he voted for both of Democratic president Obama's supreme court nominees - Sonia Sotomayor and Elena Kagan - and thought they "lived exemplary lives, quite frankly". In the past, he noted, conservative and liberal justices alike were confirmed unanimously or with little dissent and he wished for a return to that era. "What we're doing is going to destroy the judiciary over time."

"You will scratch your head when you hear this, because it's as if you judges write the laws instead of us senators. But if Congress passes a bad law, as a judge you're not allowed to just pretend that we passed a good law. The oath you take demands that you follow the law, even if you dislike the result."

Grassley said his panel will probably cast a vote on Gorsuch's nomination in two weeks, on 3 April. Congress leaves for a two-week recess on 7 April. As the hearing began, about 20 protesters were sitting in the public gallery wearing T-shirts that said "#StopGorsuch" but they soon left and there were several empty seats.

Republicans hold 52 of the Senate's 100 seats. Under current rules, Gorsuch would need 60 votes to secure confirmation. If Democrats stay unified and Gorsuch cannot reach 60, Republicans could change the rules to allow confirmation by a simple majority - the so-called "nuclear option".